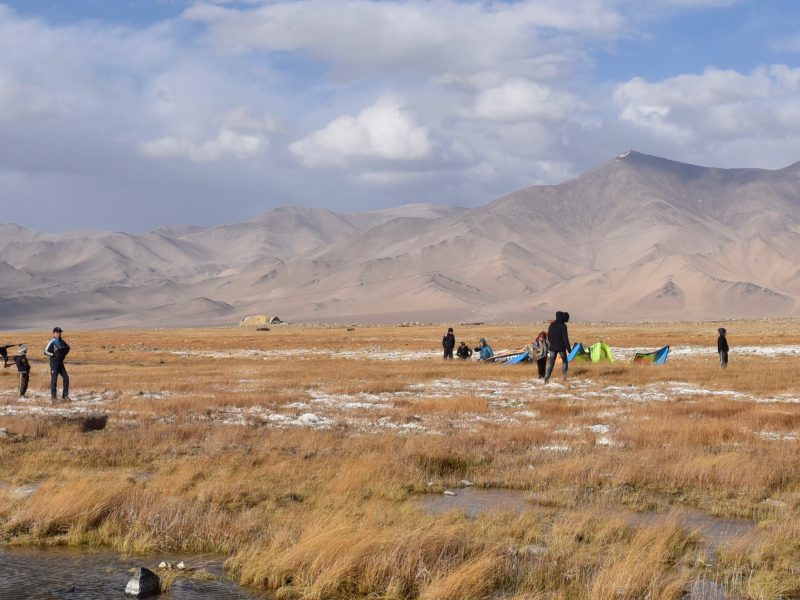 Return to the roof of the world

The Crathorne family have a history of undertaking incredible adventures together. This year they returned to Tajikistan for the Roof of the World Regatta – a kitesurfing challenge that really is hard to compare to anything else. Here’s Polly: 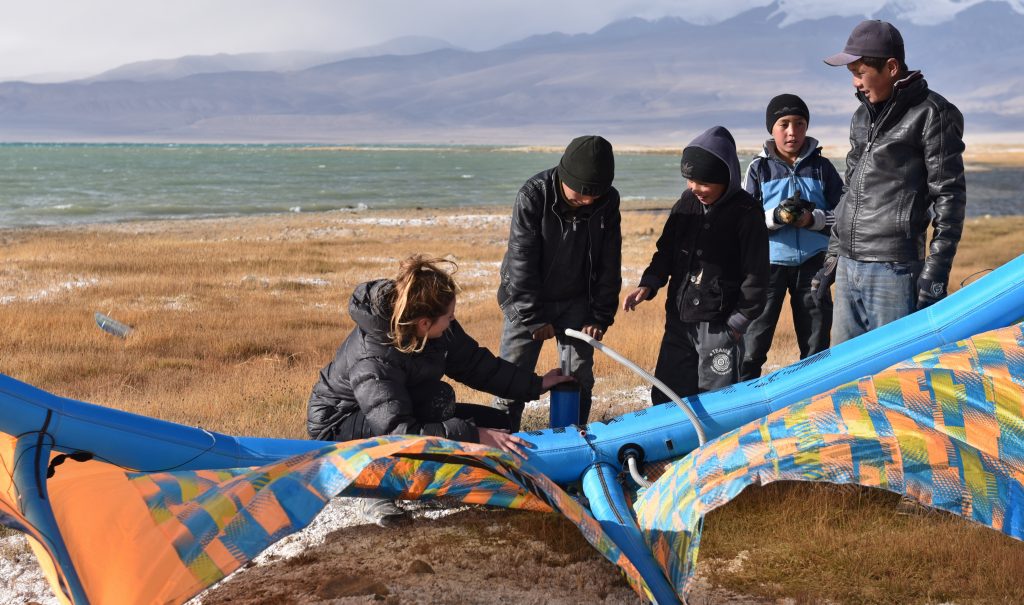 There’s commotion at the water’s edge. Shouts in Russian and Kyrgyz and Khojabegim, our new friend from Tajikistan worriedly beckons my mother and I over. We run towards the lake (an act not entirely easy at 3960m above sea level). Lake Karakul which, minutes previously had been a picture of serenity, had turned into a frothing, foreboding ocean. The storm had appeared in an instant; characteristic of the fickle weather in the Eastern Pamirs. We find my father emerging from the water. He is doubled over in pain. He can’t speak.

Once Dad’s kite is landed and harness peeled off we pile layers on him to shield against the biting cold. Hours later, although dry and inside the homestay, he cannot shake the cold. Dad explains how in the sudden squall he had come
off his board and the few minutes body-dragging in the freezing water had felt like a life time, “I felt the life draining out of me and into the lake” he says. 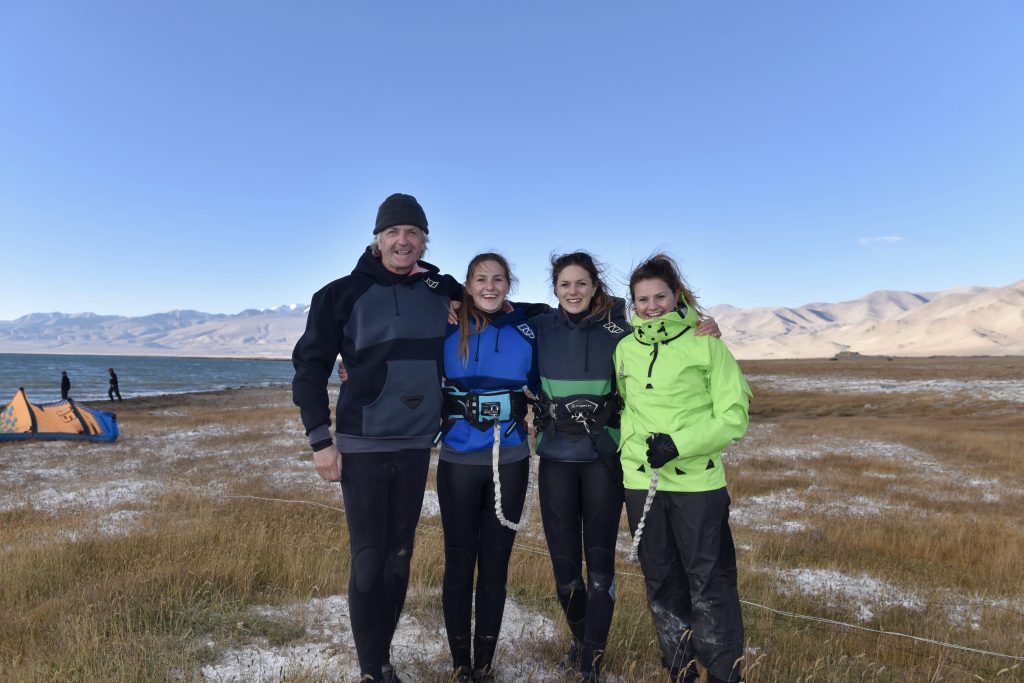 Lake Karakul is fed by glacial melt from the surrounding 7000m snow-peaked mountains, it is in fact frozen for eight months of the year. The lake is over 230m deep in places, with ice and black mud at the bottom. The wind picks up in the evenings whipping the lake into a frenzy. This gave us a narrow window to launch and race on the lake. Due to the remote location (a few days drive to the next nearest village), we were unable to source a safety boat for the regatta. This made heading out onto the water each time rather risky, with 16 miles of cold lake to cross until the other side. I was lucky to have my NP Surf Lucifer dry suit to keep me warm but my sisters and Dad had to survive in their 5/4mm wetsuits – I don’t know how they did it! As well as the cold and changeable weather, the severe altitude made the riding conditions incredibly challenging. After a few tacks we were breathless from the lack of oxygen.

Upon first sight you’d be forgiven for thinking the village of Karakul is an abandoned town. Electricity poles and lines hang redundant, a relic from the soviet era and harsh desert surrounds the village. There are in fact 240 families living here, the only settlement for thousands of kilometres. They survive by nomadic herding of Yak and sheep and hunting Marco Polo Sheep and ibex as crops cannot grow here. The houses rely on dung or shrubs for fuel for heating. Water supply is challenging as the lake itself is salty and it barely rains so it has to be extracted from deep well. 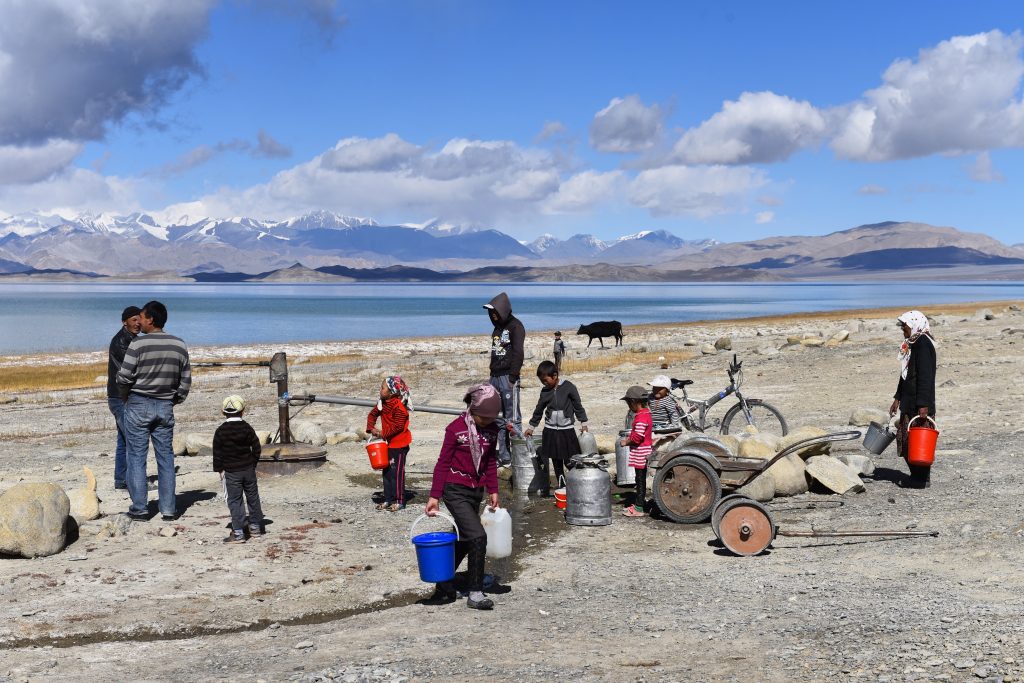 Our (my parents, two sisters, Jemima and Lucy) journey to the remote wilds of the Eastern Pamirs had begun a week previously in Tajikistan’s Capital, Dushanbe. We took the only route from here, 1000km along the Pamir Highway, a historic part of the silk route and the second highest road in the world. This dirt-road hugs the border with Afghanistan. The seven-day journey takes you through stunning steep-sided mountain valleys following a raging river that separates the two countries. It then winds up into the mountains with views into Pakistan and the Hindu Kush. The highest point on our journey was the Ak-Baitel pass at 4650m, where one of us duly vomited at the top from altitude sickness before we reached Karakul at 3,960m. 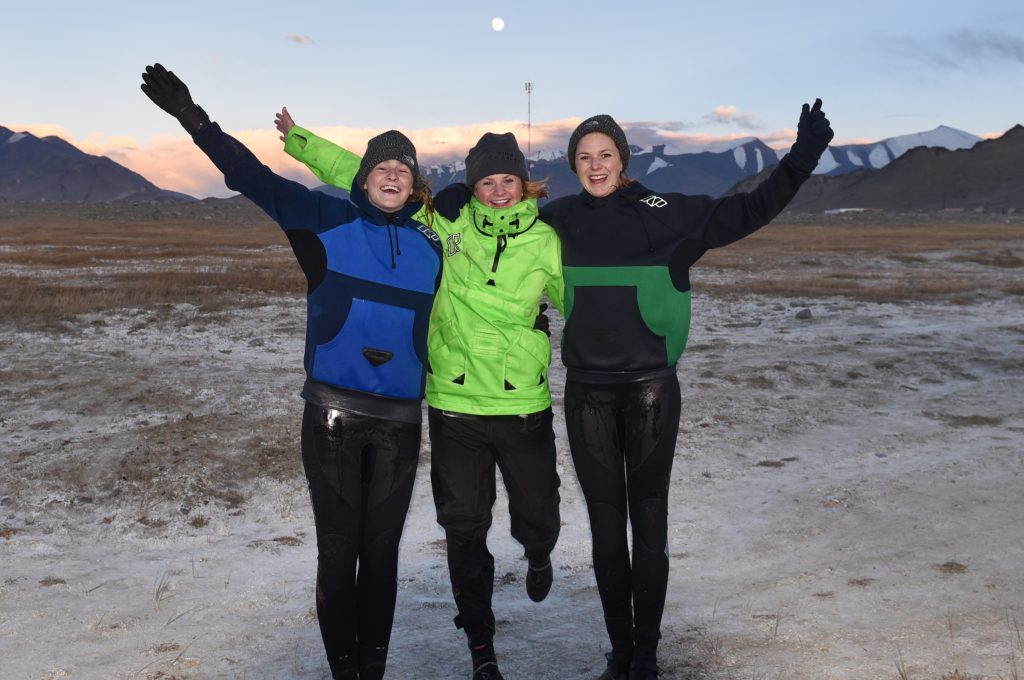 The harsh conditions at this altitude mean people stay inside for much of the day if possible, so wandering around the village it’s often quiet. What is so cool, is that when we raced, hundreds of families and several soldiers from the border post with Kyrgyzstan would appear at the shoreline to spectate and cheer. We also got to hang out with the families and fly kites with the children from the school and play games as part of the event too. In the first year of the Roof of the World Regatta, the local Imam mentioned that this was the first time in his memory that the whole village had come together to participate in something. This year, visiting long-distance cycling heroes Guim and Martina supplied some juggling and children’s entertainment. They also became our first aid team (which involved supplying us with tablets for sickness when the altitude got too much).

As we drove off towards the Kyzyl-Art Pass (4280m) leaving Karakul behind, I had mixed feelings. It was morning so the vast lake appeared bright blue, a gem nestled between the mountains – innocent and serene. Memories of the severe conditions of five days of racing on the lake and the desire for more oxygen our the lungs reminded me that it was time to head to lower ground. Hours of bumpy road and two border posts later, we descend in to Kyrgyzstan and the Alay Valley. Snow starts to fall. Not the first snowfall that summer apparently… 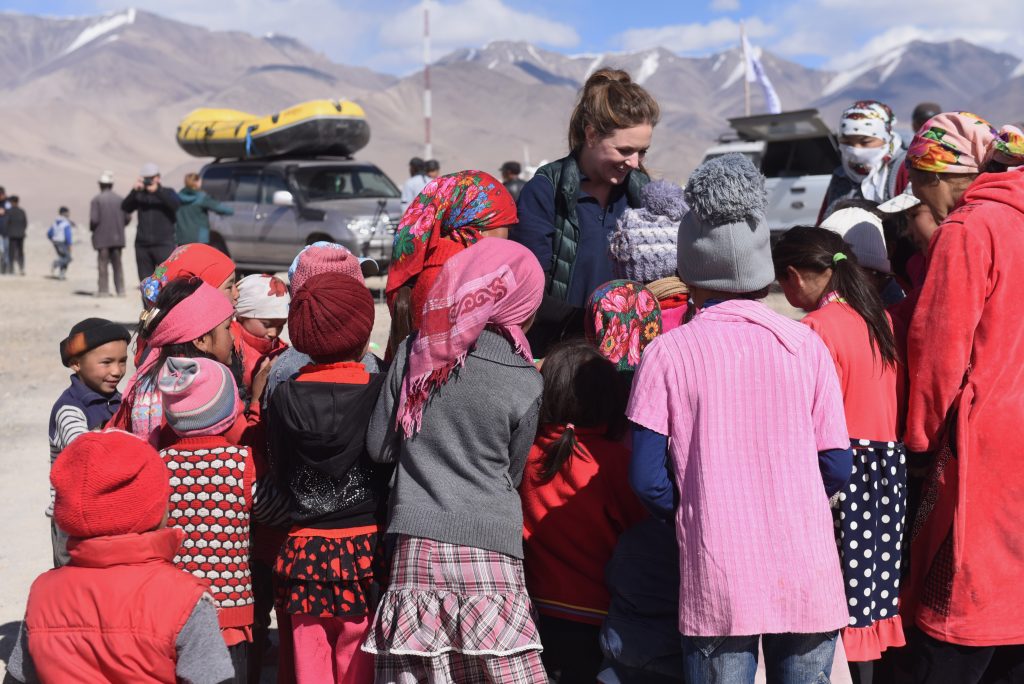 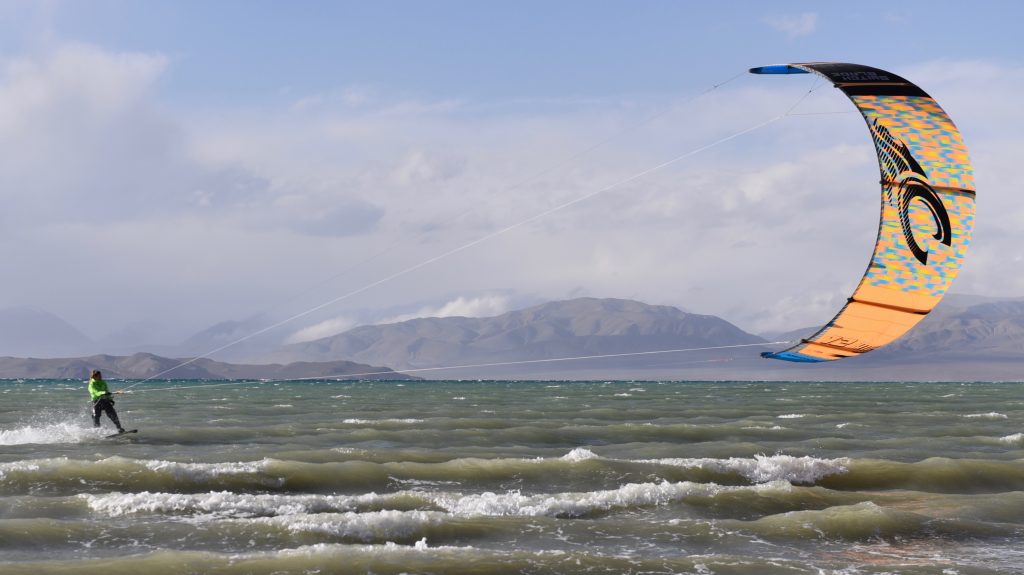 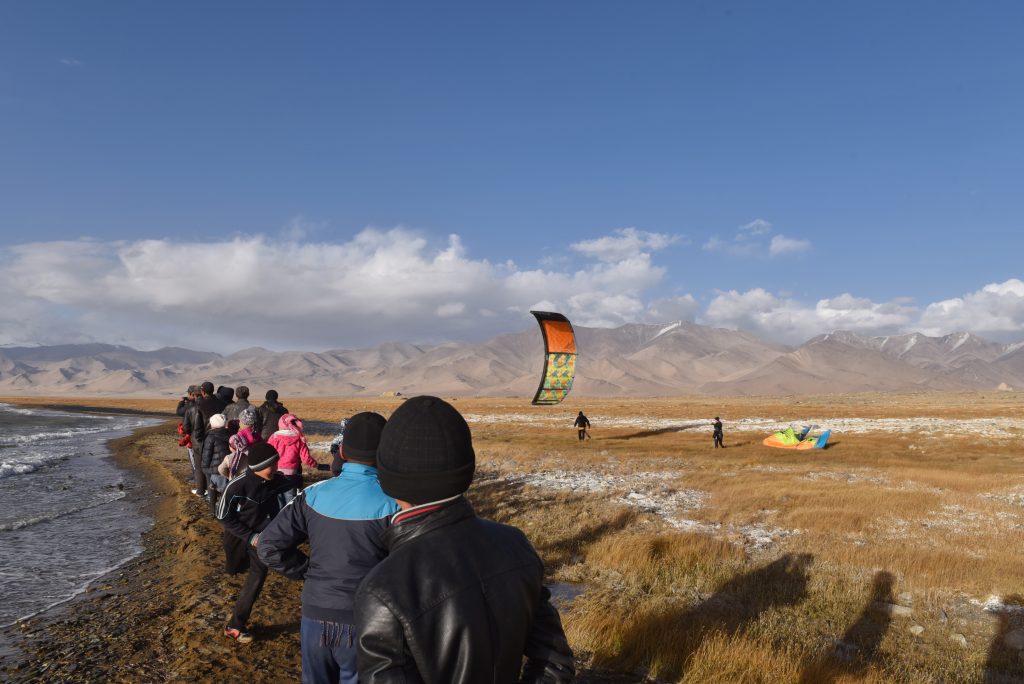 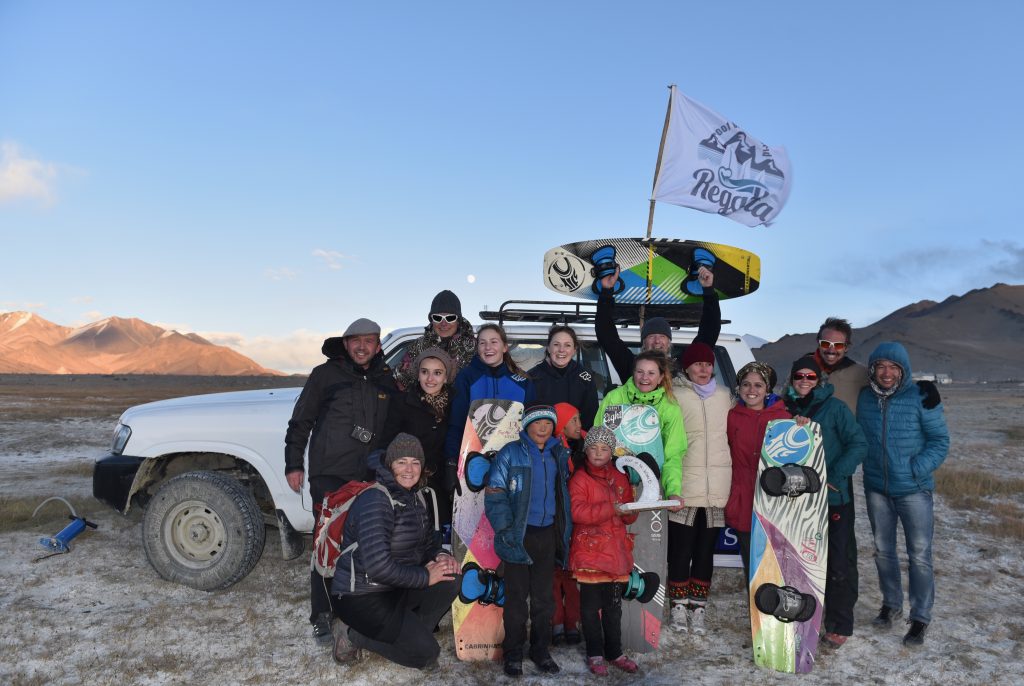 Every year this crazy event is different and special. Old and new faces come each time and support the fun and the hospitality I have always experienced is overwhelming. I write this whilst in transit in Moscow, bound for the fourth and final Roof of the World Regatta, the highest altitude sailing race in the world.

Deepest thanks go to Gulnara and her family, Sadat and her family, Azamat, Vasya, Tony and Jackie, Anton and his mother, Matthias and the many others who hosted and helped.

And thank you to Cabrinha and NP for your continued support.

Check out the video from last year’s adventure here

Return to the roof of the world from Polly Crathorne on Vimeo.