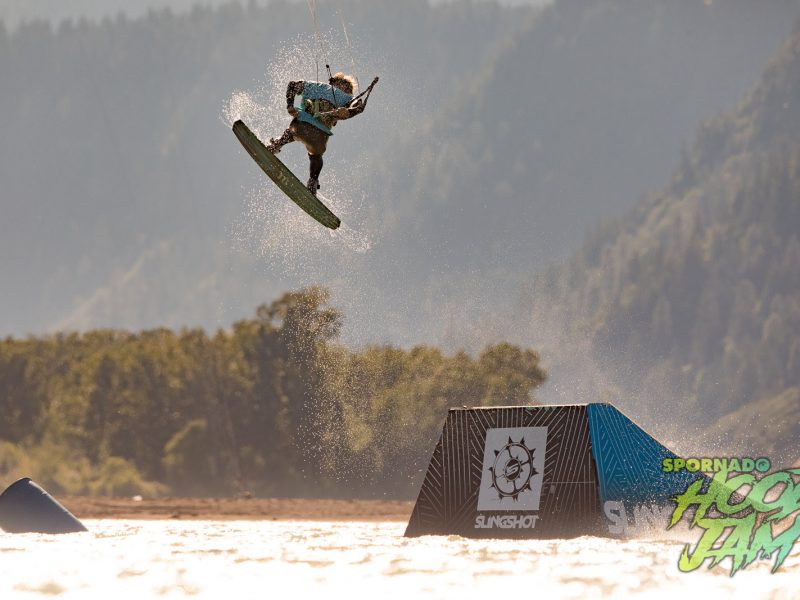 Words by: The Slider Project

The winds were blowing and the riders were frothing. The King and Queen of the Kicker contest was run at sunset during the golden hour on Thursday. Toby Bromwich and Vincent Bergeron were posted and ready for hours capturing the finest moments. The wind was patchy and strong, leaving the Hood River locals to dominate the scene.

Brandon Scheid was notable, yet again, with the only toeside backside 900 off the Slingshot kicker on the right side tack. He didn’t take too many hits, but he made each one count. After riding away clean, he perched himself atop the kicker while watching the other men hit the left-footed Full Sail Session kicker.

The girls were attempting new tricks and coming close to landing some which have never been done. Annelous Lammerts was trying a Pete Rose, Sensi Graves a Blind Pete, and Colleen Carroll a Tantrum to Blind.

However, Lindsay McClure came through in the last minutes with a crowmobe off the Session Kicker. She was going for a Backmobe on the bigger kicker but wasn’t able to stomp it in the allotted amount of time.

Along with spending copious amounts of time on the water, the athletes have been posting endlessly on their Spornado profiles. The third place in the photograph competition will be a hand-held gimble. Second place will receive a top-of-the-line fitness tracking Garmin watch. The winner of the Sponado competition will get a Mavic Pro Drone.

Tomorrow’s plan is undecided with the best of the rail rider’s competition still having to go down. The closing ceremony will be held Friday at River City Saloon in Hood River starting at 20:00. Put on your party hats and get ready to celebrate the Spornado Hood Jam 2017.