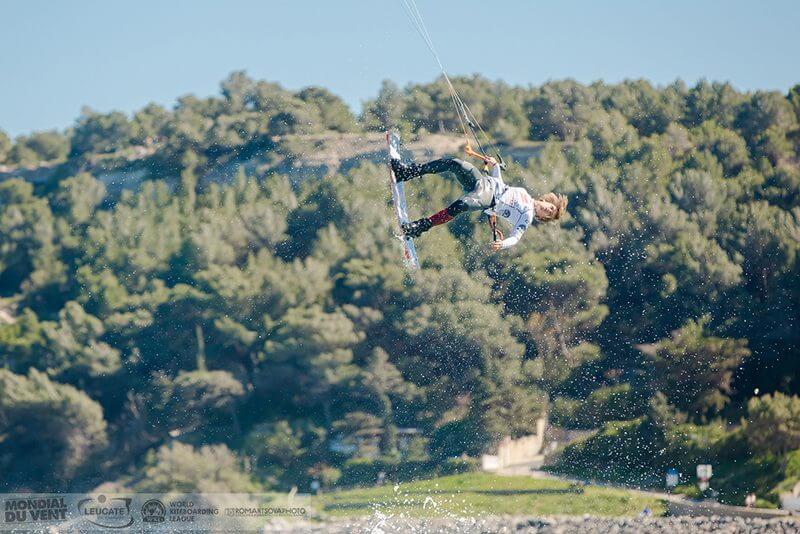 After years of competing on local freestyle events in the Netherlands and Europe and annoying injuries the past year, it was time for me to compete against the top riders in freestyle kiteboarding. The past months I hadn’t trained really hard but I felt ready to join the qualifiers to qualify for the 2017 season. My tricks during my training sessions felt pretty good. I have already competed in some world tour events two years ago between the junior events in the Netherlands and Europe so I had some experience with the scoring system and the level of all the professional riders on the tour. Competing against the top riders always gave me an enormous adrenaline kick. I was constantly learning a lot during these competitions and it made me more motivated than ever to improve myself as an athlete. In April this year I made it to the top eight of the qualifier event at the first stop of the World Kiteboarding League in Leucate. This means I am qualified for the world tour the rest of the year, together with the 23 best pro freestylers in the world. Super stoked on this result and can’t wait to get this season going! 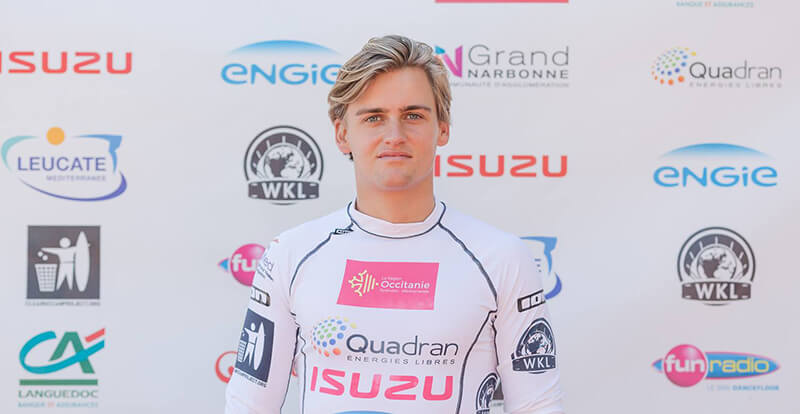 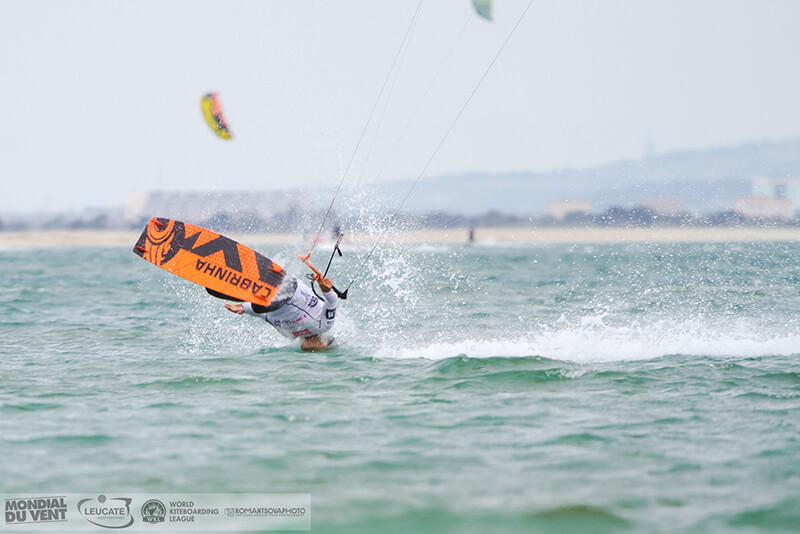 The World Kiteboarding League was established by the riders for the riders and is the umbrella above all world tour events in freestyle and big air since 2016. At the beginning of each year there is a qualification event before the first main event of the year. Everyone can participate in the qualifications and has a chance to qualify themselves for all the events of the tour with just 24 riders that are able to participate. The first event of the year was in Leucate, France between the 11th and 17th of April. The second event will be in Cabarete, in the Dominican Republic between the 17th and 23rd of July. From that point the WKL will be organizing an event every month. Places like Cape Verde, Germany, the Netherlands (Texel), Oman, Morocco and Mexico are on the schedule. The World Kiteboarding League signed a contract with Case Productions which means they are able to guarantee the best livestream possibilities during all the events this year. Case Productions is an international video team that has 20 years of experience in sports production. For example, they have a collaboration with Red Bull and did the full production for the Class 1 World Offshore Powerboat Championships. A good acquisition to make a good promotion for every event in a professional way, and take the sport to the next level. 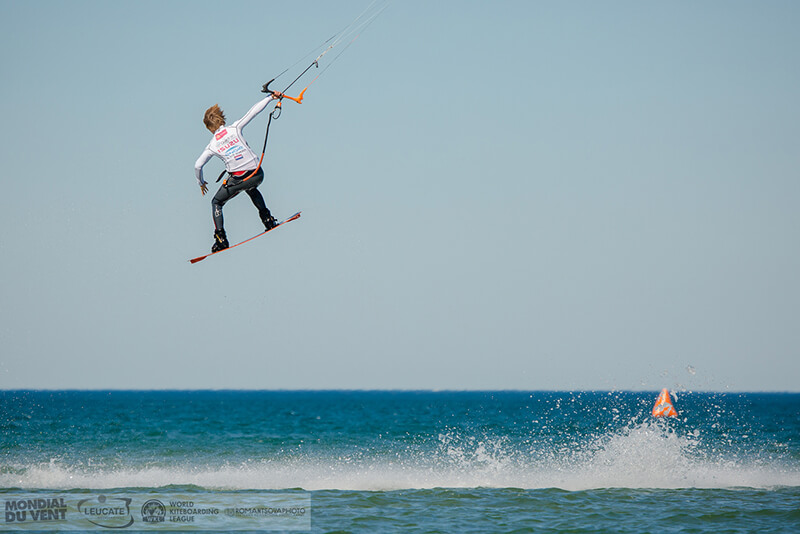 On the same spot, before the start of the first WKL main event, the qualification event was held. 41 riders were fighting for a top nine spot in the qualifier league. The other 15 riders in the main event were already pre-qualified for the season bases upon their ranking last year. Leucate is well known because of the ‘Tranmontane” wind. This is a typical strong offshore wind which provides challenging conditions for the riders. This makes it extra exciting for the riders… Which rider performs the best under these difficult conditions?

The competition ladder existed of four rounds, you had to win three rounds to guarantee a top nine spot. Of course this was quite challenging for me as I didn’t train a lot for this event. I was the only Dutch guy in the men’s, and had to compete against riders from everywhere inside and outside of Europe. In the first and second round I already had pretty strong opponents in the heat. The number one in the Dominican Republic, Luis Alberto Cruz, five times world champion Aaron Hadlow, and upcoming talent Anthar Racca. The gusty and offshore wind made it difficult for all of us to show what we have got. The focus was on who performed the best with the simple basic tricks on their smallest kite. Overpowered on my 7m Cabrinha Chaos it was even hard to perform the basic handle passes. The new system works with seven attempts per heat and four tricks that count. Each rider has one minute to perform their trick inside the competition area. My strategy was to start every heat with the trick I could do my best and the difficult ones at the end of the heat. I started every heat with a Heart attack (s-bend with a backside 313). Followed by a slim 5, lowmobe and a KGB. Every time I managed to land these tricks properly in these conditions, I was as happy as a little kid. 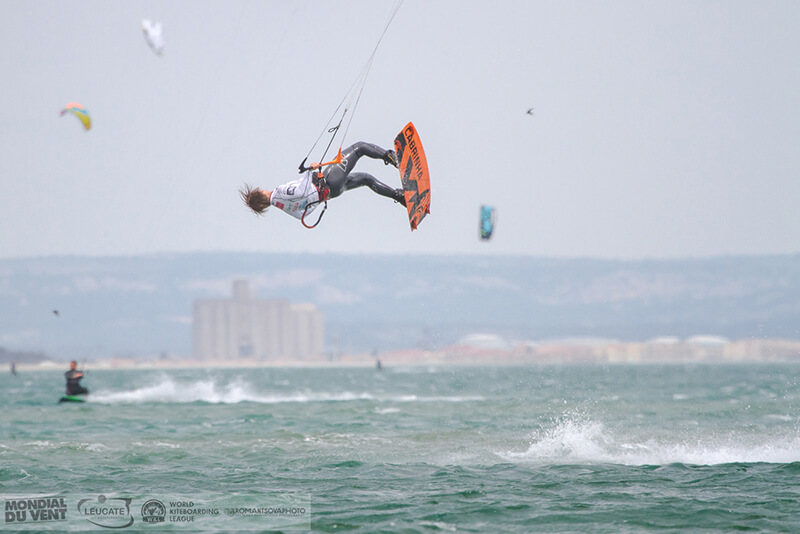 In the second round I ended up 2nd in my heat below Aaron Hadlow and above Anthar Racca. The number one and two spot of each heat passed to the next round. In the 3rd round I was up against Junior world champion Nicolas Delmas, Eudazio Da Silva and Simon Lamusse. I started the heat the same as always which worked out really well at this one. I managed to get proper scores on the ‘basic tricks’. A heart attack (6.5), followed by a Slim 5 (6), KGB (6.2) and a BS313 (4.33). With a total score of 23.03, two points higher that the rest, I became 1st in my heat and qualified myself for the WKL world tour. Couldn’t be happier at that moment and it still feels great. Finally! 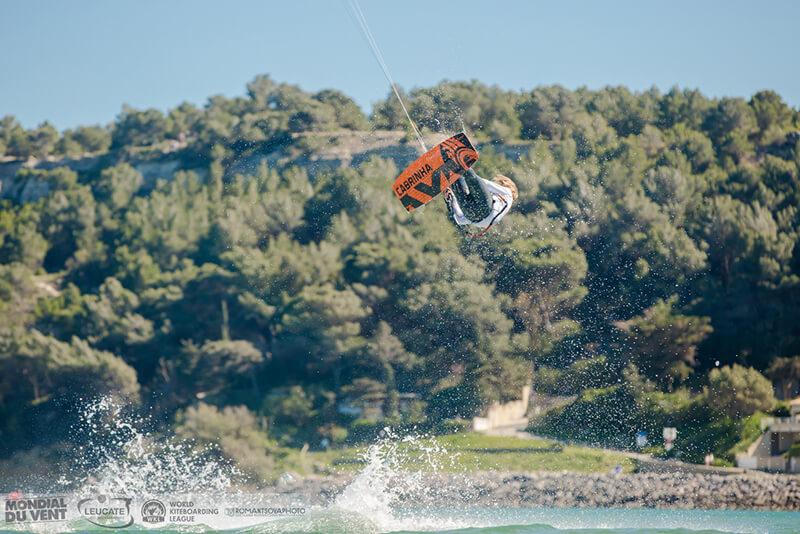 Leucate is a well known place for kitesurfers and windsurfers on the Mediterranean coast of France. It is located around 30 km south of Narbonne, and around 30 km north of Perpignan. Leucate itself is a small town near the beach but not the exact spot for kitesurfing. The best spot in the area of Leucate is La Franqui. It’s a really small town a little up north from Leucate with just one street with a good spot in front. When the wind is lighter cross-shore the spot is fine for beginners. However when the offshore Tramontana wind kicks in (which is 300+ days a year) the wind is mostly strong and gusty and the water becomes flat, which makes it a very good place for freeride and freestyle riders. The Mondial du Vent competition each April is in La Franqui as well. The south of France usually has nice weather and good temperatures. During winter a wetsuit is needed. High season starts from April/May. 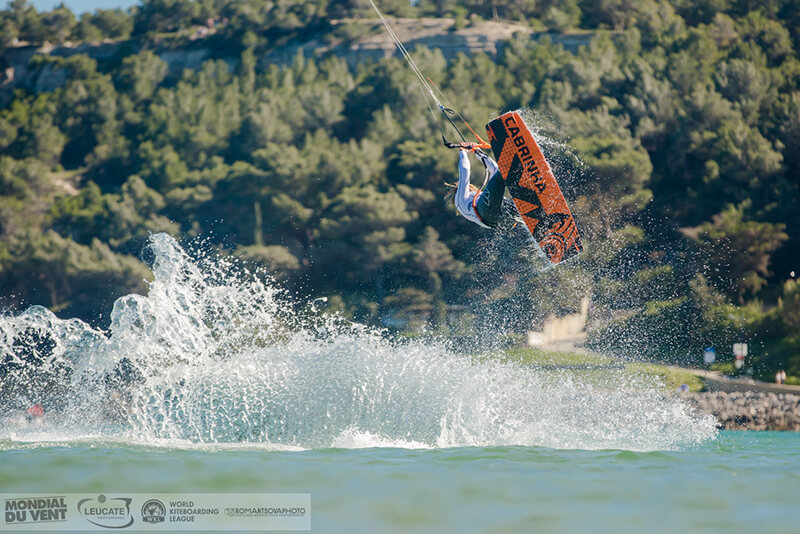 How to get there

The nearest airports are Perpignan (20km), Toulouse (140km) and Montpellier (140km). Personally I flew from Amsterdam to Barcelona and rented a car at the airport to drive up north. It’s a 2 hours drive and most flights are cheaper to Barcelona. That depend where you fly from off course. Due to my experience rental companies to rent a car are cheaper in Barcelona than at the other airports closer to leucate. You can also fly to Gerona airport which has cheap flights from Ryanair. Renting a car there can be more expensive due to my experience.

Leucate has plenty of accommodation of all types. In La Franqui itself there are no hotels, only apartments. In the nearby towns Leucate (7km) and Port-Leucate (10km) there are hotels and apartments available. With Airbnb and booking.com you can find a lot of available apartments and hotels at a good price.

In Leucate village and La Franqui you will find plenty of local fish and Italian restaurants for dinner. Important to know is that these restaurants are only open in summer season from halfway through April. In low season most of the restaurants and shops in la Franqui or Leucate village are closed. I have been to Leucate two times. A couple of weeks before the start of the Mondial du Vent I went there to train for a couple of days. Literally every shop or restaurant besides the supermarket was closed. And in Leucate village and La Franqui nobody was around. I didn’t expect that this place was so extinct in low season. A couple of weeks later, during the Mondial du Vent it was totally different. Everything was open, fully booked and the streets were full of people. Which is logical during this event. But still it was a fun image to see this difference in such a short period.

If you are looking for bars to go to I recommend you to go to Narbonne or Perpignan. If you have a car it’s a 30 minute drive to these cities’ bustling bars, restaurants and shops.

(No wind) Activities besides kitesurfing nearby

The day after the qualifications, the main event started. In the 1st round I still was a bit unfocused to compete against the top riders. As I already competed against some of these top riders in the qualifiers it still felt different. The wind dropped a bit and everyone started preparing bigger sizes. As I was still very happy about my result it didn’t go well in the 1st heat of the main event. I felt too much pressure to go harder and bigger as the level increased a lot. This unfortunately resulted in some hard crashes and I didn’t manage to land four proper scoring tricks. In the second round I felt I had nothing to lose anymore which felt much better. I was up against Aaron Hadlow again and Oswald Smith. I landed my first three attempts which gave me 2nd place in the heat. I knew I had to go big to keep this 2nd place and still had a couple of attempts. On the last one I went for a Blind judge 5 (Backside 315) and I managed to land it with a 7.63 score. Before I thought I made a 2nd place I realized Oswald Smith still had his last attempt. He had to score 5.71 to capture the 2nd place and score a 5.81 with a clean lowmobe. By 0.2 points difference I became 3rd in the heat. This resulted in a 17th place in the ranking for me for the first event. Still pretty happy about the result as I learned a lot and I am more experienced with the scoring system right now. There is a lot more time for each rider to prepare and show the tricks. As well, just four tricks per heat are counting so you can concentrate on a few key tricks during your training sessions. 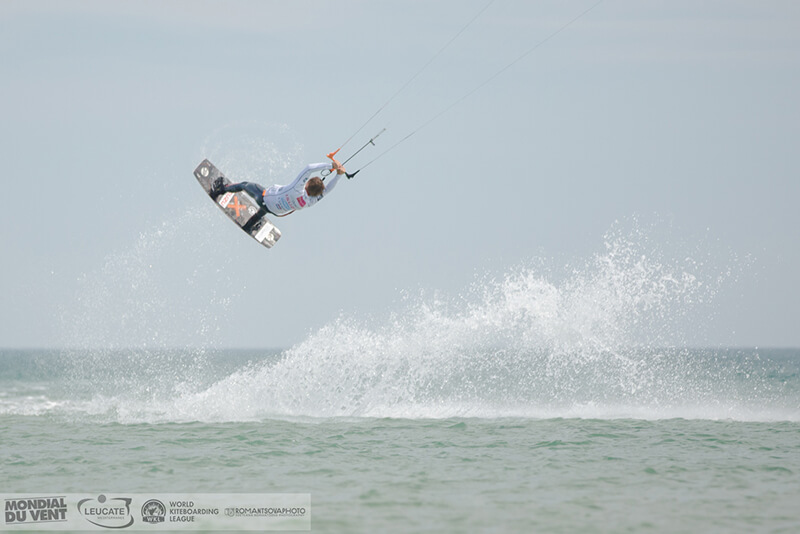 The rest of the year

The second stop of the WKL world tour will be in Cabarete, Dominican Republic, as I said earlier. Luckily I chose the right course to combine all this with studying. I am studying at the Johan Cruijff Academy, in my 2nd year of Sports marketing at the moment. The Johan Cruijff Academy is specialized to combine top sports with studying. All the teachers have a top sport background and so they know the feeling of being a athlete. My goal is to get a top 14 result this year to be sure I will be pre qualified for the 2018 season. I am really looking forward to it! 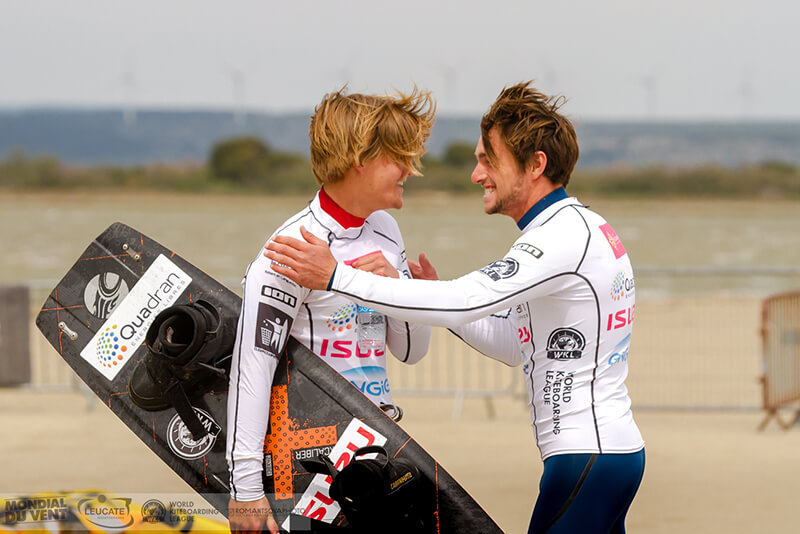 One Tip all Kitesurfers Should Know

Damian LeRoy talks us through safely launching a kite... 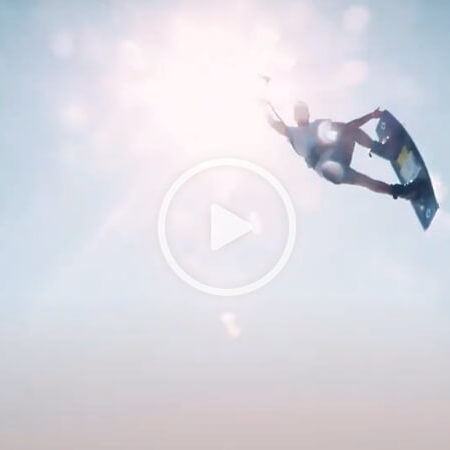 The Sicilian hero is at it again...