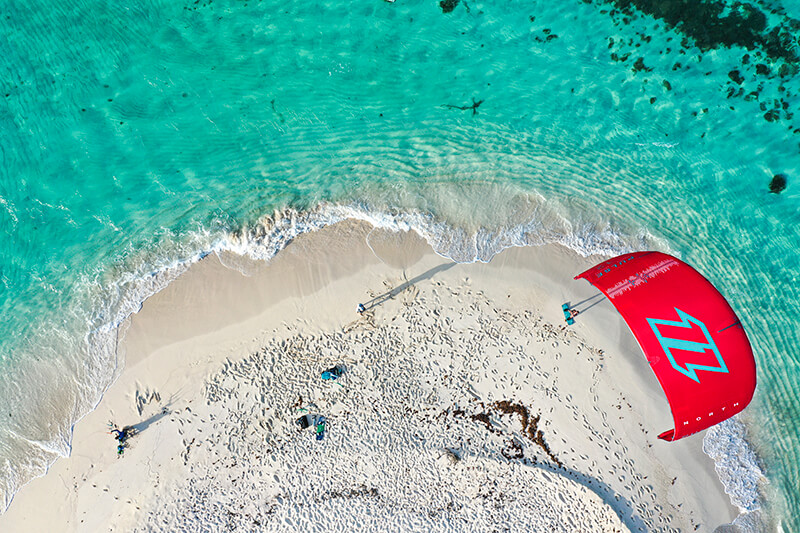 While we’ve made an effort not to dwell too much on the recent goings on in the world, when we read this it gave us goosebumps. Annabel van Westerop has managed to perfectly capture the crazy global vibe of a few months (which feels more like a year or two) ago.

You can have a trip pre-planned and all figured out. And then the unexpected happens. The one thing you wouldn’t see coming in a million years. A global pandemic. So you adapt. And in the midst of crisis, the magic happens.

We stepped aboard the Action Cruise in Grenada, an island situated in the Eastern Caribbean. Nine days of sailing on a catamaran, with only one goal: kiting in some of the most picturesque spots imaginable. Hosted by the positively spirited Italian captain Federico and amusing French Masterchef Jordane, the trip was already set up for success. All in all, we were six people aboard the catamaran, ready to go and explore.

From the port of Grenada we set sail towards the Grenadines, a group of islands that are a true kiter’s paradise. The Action Cruise has been meticulously planned to make sure all the best spots are visited during the trip, but as we were a small crew, change from the original planning seemed to be seeping in from day one. About halfway to the Grenadines we spotted a sandspit on a tiny deserted island. We were supposed to have a full day of sailing but the wind lured us to the spot and we geared up for our first Caribbean session. I grew up on Aruba, an island not far from where we were, and I only moved back to the Netherlands about a year ago. Needless to say, it felt like coming home when I launched my kite and dove into the warm, blue water.

Nights on the Action Cruise were the best. Tired and content from a long day on the water, with the warm breeze brushing past your skin, and chef Jordane making an incredible meal. From dancing on the boat to lobster dinners with your feet in the sand under the stars, this trip had it all. Chatting and laughing the nights away, and finally having the gentle rocking of the boat put you to sleep, in preparation for the next day. And repeat… 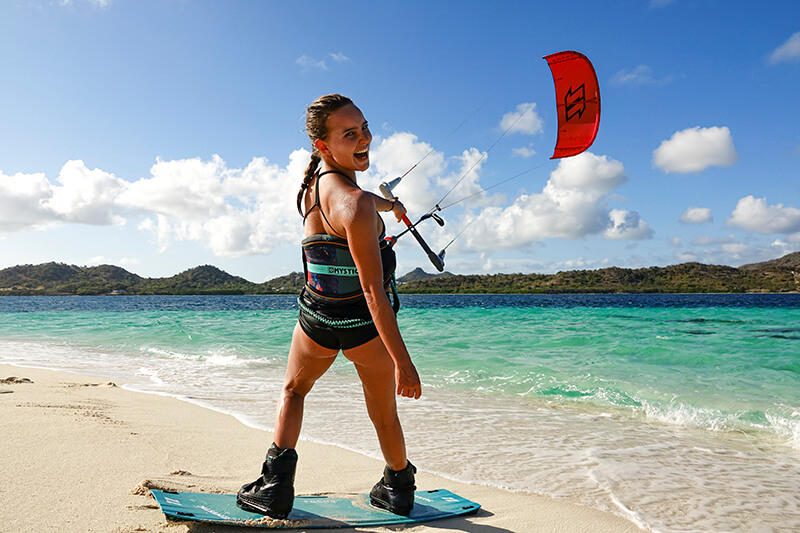 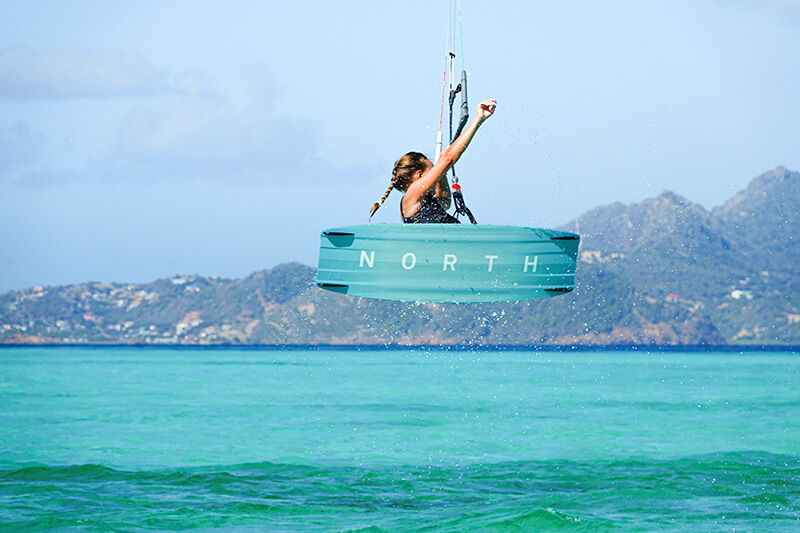 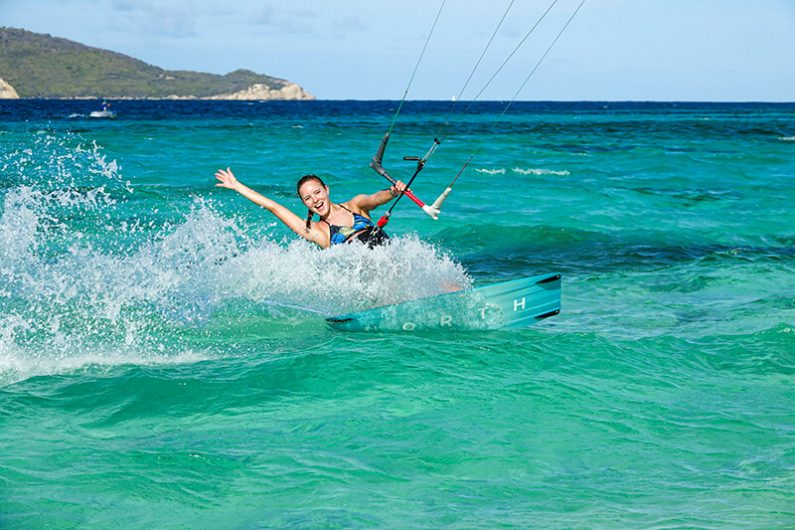 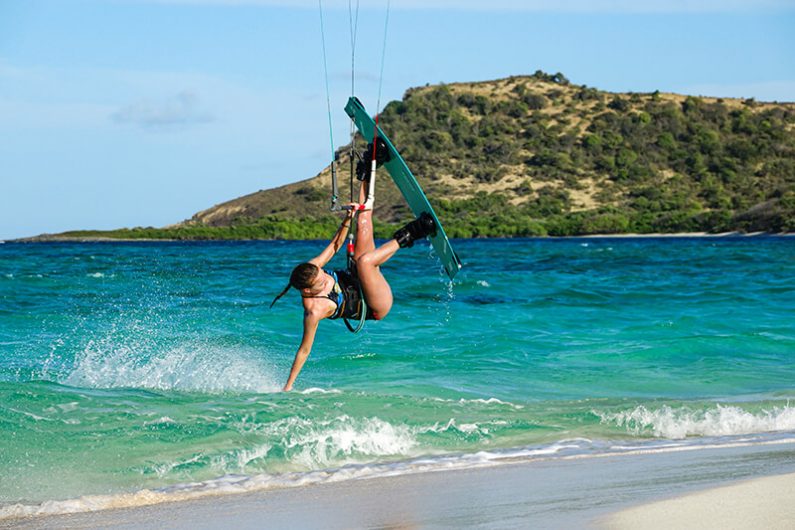 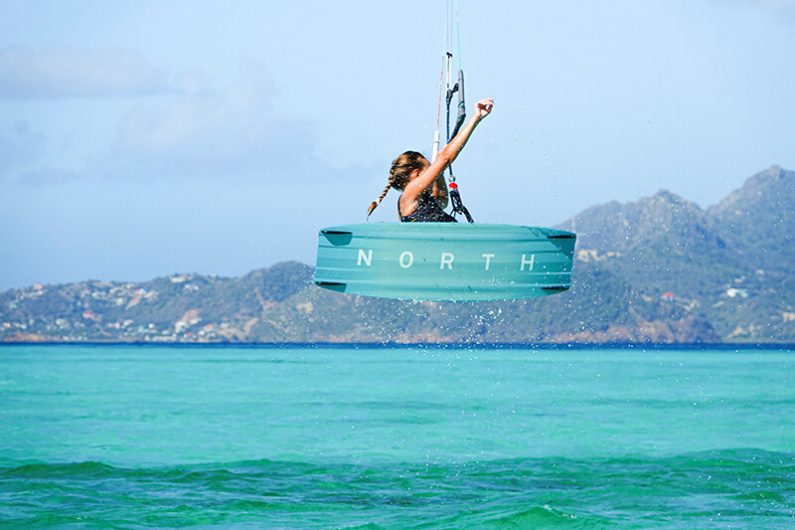 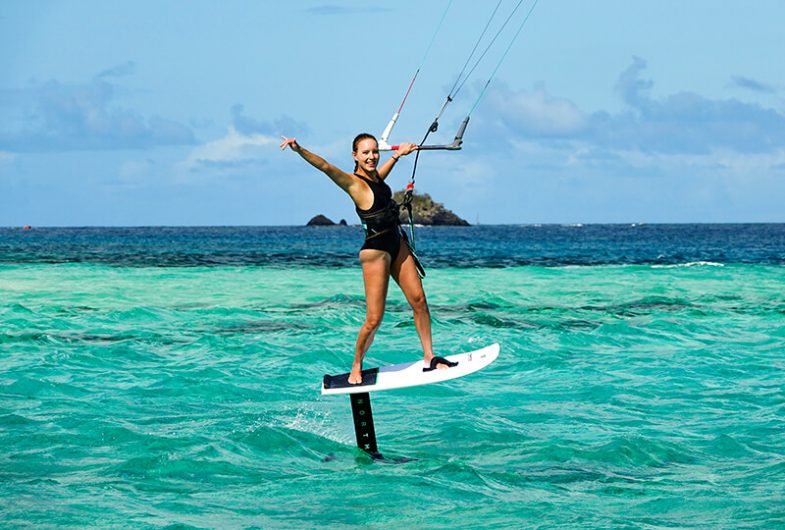 The following few days we chased the wind from spot-to-spot. The original plan was long gone, as we made spontaneous new plans that we wrote out with a marker on the kitchen window. We had all the North goodies aboard, so whatever the conditions brought, we had a blast. Foiling in the endless light blue water among turtles and stingrays through the Tobago Cays, freestyling in the flat-water paradise of Frigate Island, and finding the most dreamy potential lockdown spot on Umbrella Island. A tiny spit of sand, one cabana, and my kites, what else do you need in life?

Yes, the global crisis was on its way, and the first countries had already gone into lockdown. We checked the news on the daily and it was completely surreal how we were roaming freely around paradise while the world seemed to be falling apart. We felt distant from it all, but could no longer ignore that very soon we would be directly affected as well. We were six people from six different nationalities, who all needed to find their way home.

In this time of uncertainty, we made the best of it. We made sure to stay up to date with the news and at the same time we continued to enjoy the Caribbean sessions. I started to view my surroundings from a different perspective. Being a pro kiteboarder, I consider myself extremely lucky that I get to travel all over the world and see the most beautiful places, but also, it almost becomes a bit ‘normal’ sometimes. It is when something is no longer a given that you start to appreciate it even more. So that sense of freedom to kite and cruise around on a catamaran on the other side of the world felt magical. 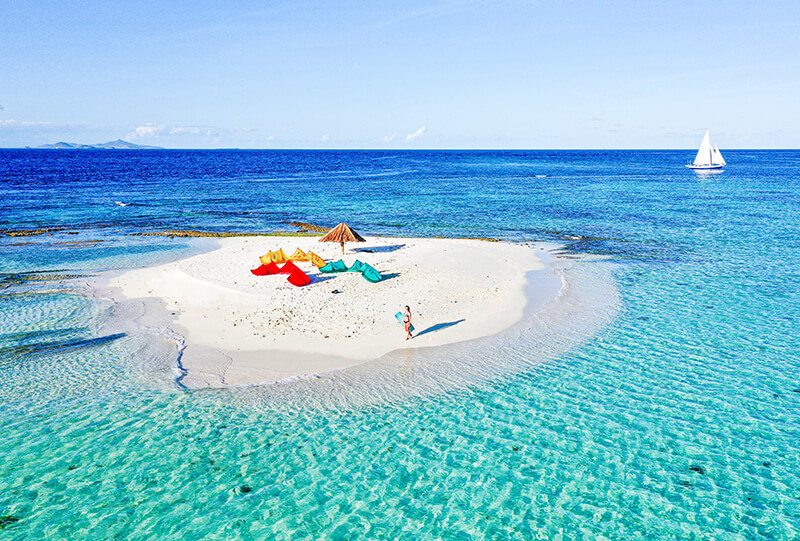 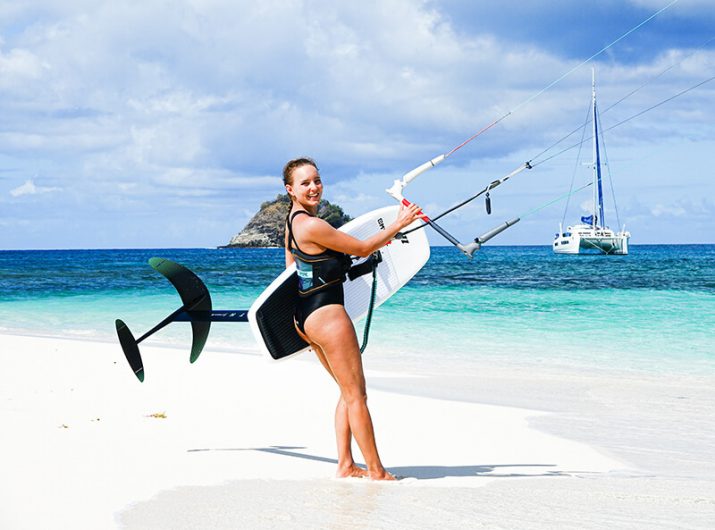 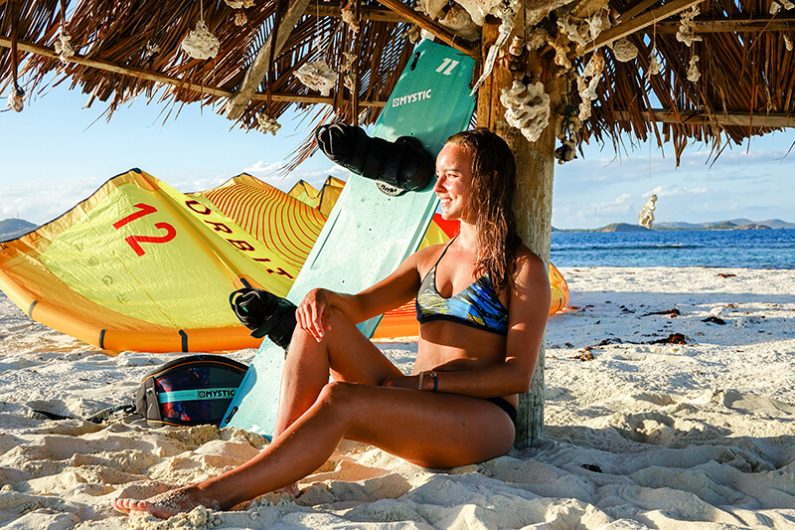 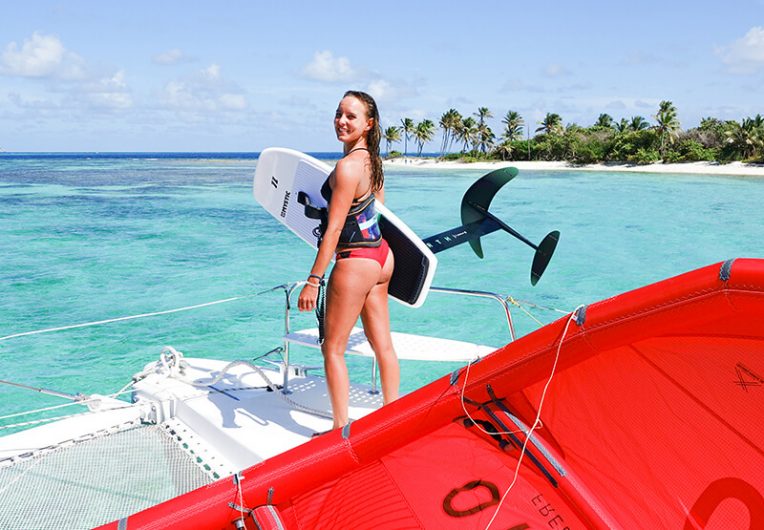 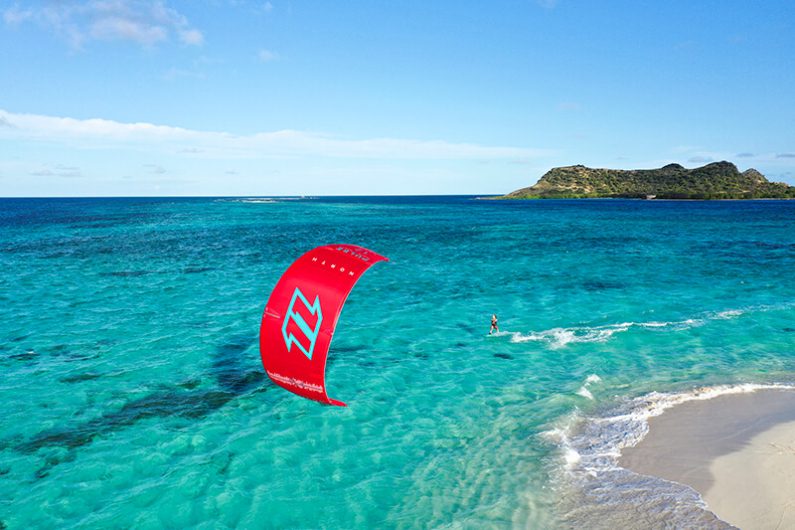 If there was even a tiny bit of our plan left, it completely washed away when we heard the islands were going to close their borders. One by one, the Caribbean islands were shutting down and all of a sudden that freedom of sailing around on a boat was restricted as well. Just a few hours before the borders of Grenada closed, we sailed into the harbor of Carriacou, one of the islands that are part of the country. Passing customs was a mission, with a medical examination and having to provide a detailed outline of your travel history. Surprisingly, at the tiniest minimarket on the smallest island, we found some facemasks. Probably at that time the only place in the entire world that had them.

So, having entered Grenada safely, although earlier than we originally planned to, we did the most logical thing: we scouted another great spot to kite! And so we finished the trip, the full nine days, with a perfect sunset and sunrise session, after which we sailed back to Grenada and stepped into the ‘real world’ again, just in time.

Due to the circumstances, my flight back to the Netherlands through the US was cancelled so I had to figure out a way home. My first thought was to go to Aruba to be with my parents, yet by then the island had already closed its borders to non-residents, and as it happened, I was no longer a resident since only three months ago… The thought crossed my mind to stay in the Grenadines, because staying in the Caribbean didn’t sound like a bad plan. However, how long would it take until I could leave? Looking back I’m glad I decided not to, as we now all know how serious the situation became.

Finally, I found a way back to the Netherlands. Three flights, completely packed with people heading home, a virus so contagious yet invisible, airports so empty they felt like ghost towns, and a constant doubt if the next flight would take off or be canceled like so many others. It was a wild and emotional ride, but I finally landed safely in Holland, where my aunt and uncle were waiting and threw me my car keys from a distance, and I found my way home to join the rest of the world in isolation.

You can plan a trip, making sure all the details line up to create absolute perfection, and you’ll probably have a wonderful time. However, it is the unexpected and spontaneous twists and turns that really complete an experience. During this special trip, my already strong love for kiteboarding got a boost, my perception of the luxury of traveling changed for the better, and close connections were made by going through an unpredictable situation, together. Massive thanks to the Action Cruise for having me, this trip I’ll definitely never forget.■