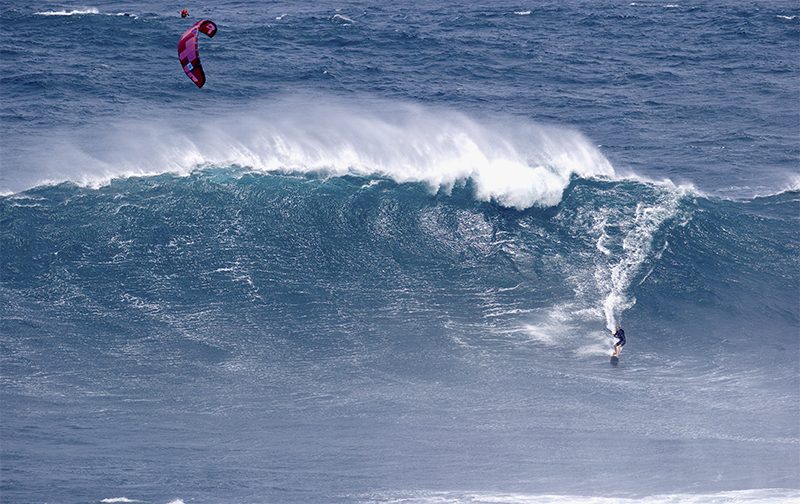 Olivia Jenkins was happily riding around at Kite Beach a couple of years back when she had the fortune (or the misfortune – depending on your perspective) of meeting Patri McLaughlin. He realized that she had some skills and felt that these would be better used in the world of waveriding – this was Maui after all. Snap forward a couple of years and Olivia is scoring legit waves at Jaws and secures 5th place at the GKA event in Dakhla…

Patri
Most people in the kiting world haven’t heard of Olivia Jenkins, but she’s made quite a name for herself on Maui. And, if you earn recognition on Maui, chances are you’re pretty good. Olivia is pretty darn good.

She is one of three girls that have kited Maui’s famous big wave, Jaws, and she’s the only girl to come from behind the peak on a set wave. And there is a big difference between kiting at Jaws, and properly riding the wave.

When I first met Olivia she didn’t even own a surfboard. She was doing raileys on a twintip when the best waves in the world were breaking on the outer reef. I could see she was super talented and I told her she should focus on riding waves. “It’s way more fun” I told her… She took the advice and after some time she started to get really good. Fast forward a couple years and we went to this big wave spot, Spartans, on Maui’s north shore. There were some giant sets and Olivia was fearless. When the biggest set of the day rolled through I jokingly yelled for her to go on the biggest one. To my surprise she didn’t hesitate. She spun around and put her head down. I saw her kick out in the channel and I could tell she was addicted. Later on that day she fell on a big wave, ditched her kite and had to swim a mile to the beach. 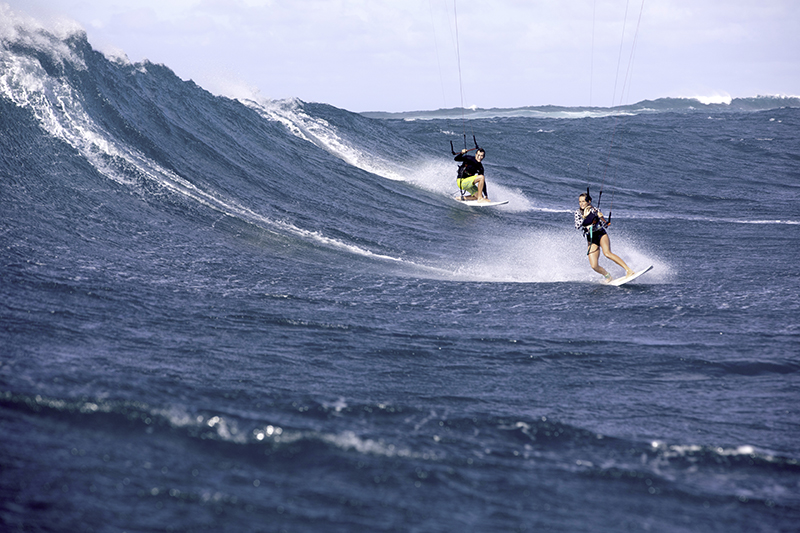 Olivia has been training her ass off to go out to Jaws, while also training to be a doctor and she is planning to go to medical school next year. She surfs on big days, and she’s kited numerous massive swells on Maui. She even came on a forecast trip to Fiji with Reo Stevens, Jesse Richman and myself. When she heard Gisela Pulido was going to give Jaws a try, I knew Olivia would want to be out there the same day.

While the girls were out kiting Jaws I was on the jet ski running safety. Olivia caught more than twenty waves and five of them were well over twenty foot faces. One wave was particularly big, and she came up from behind the peak. That’s how you put yourself in the most danger. If the lip lands on you, you need to be ready for a beating. I wish I had a camera from my angle. She was standing just in front of a giant barrel. After she kicked out of that wave she casually rides by me and says, “That was a fun one”. I honestly think I was more scared then she was.

Three days after she kited Jaws, she hopped on a plane to try her hand in the GKA contest in Dakhla. After she lost early in the second round she clawed her way back up the double elimination ladder and secured a 5th place finish. I think if the waves were bigger, she would’ve ended up on the podium.

So from someone who not so long ago had never really ridden a wave, Olivia now rips in the surf – with a forehand carve equal to most men I know – and her fearlessness in giant surf is equal to anyone. I’m excited to see what she does over the next couple years. 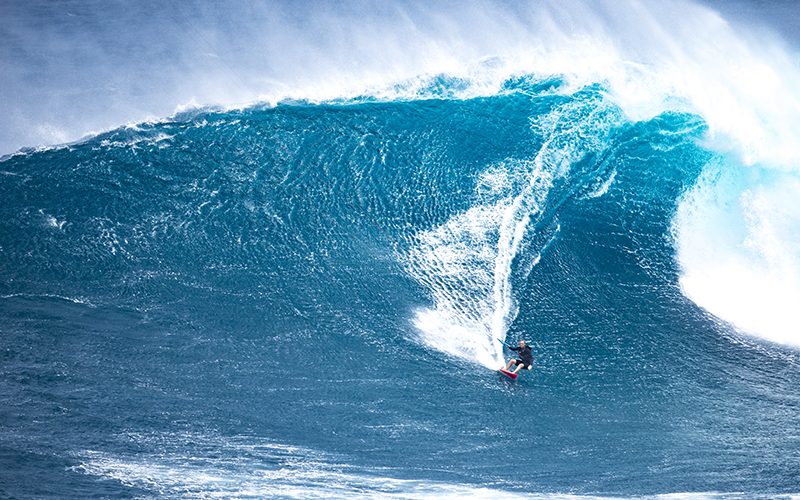 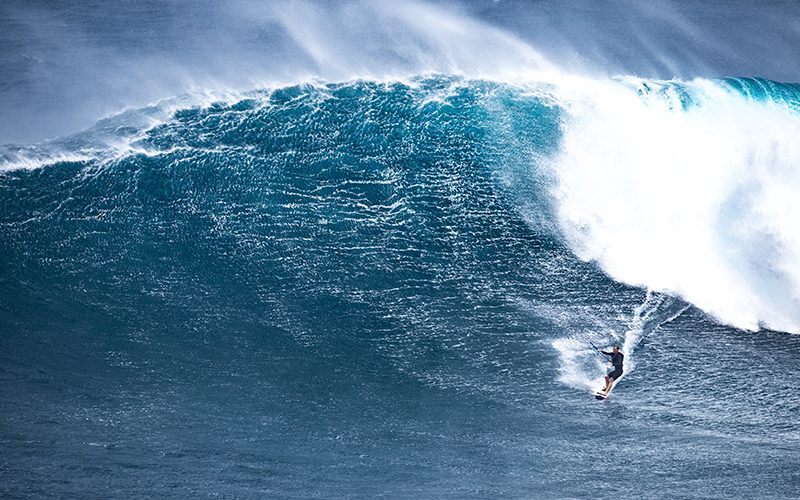 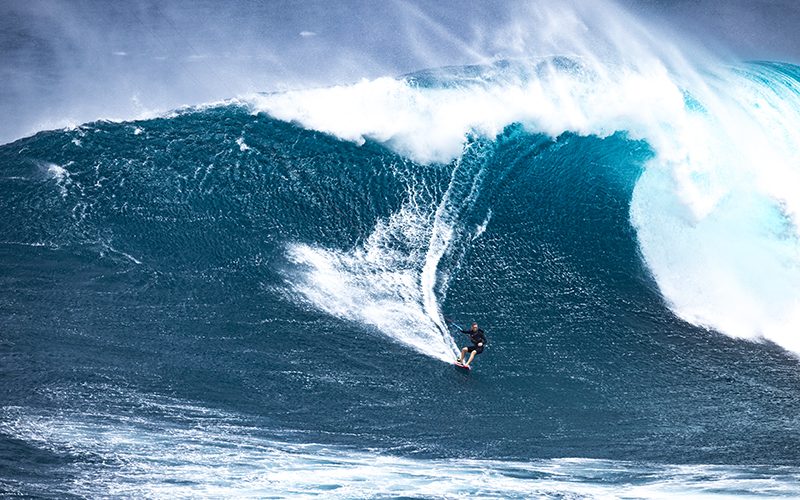 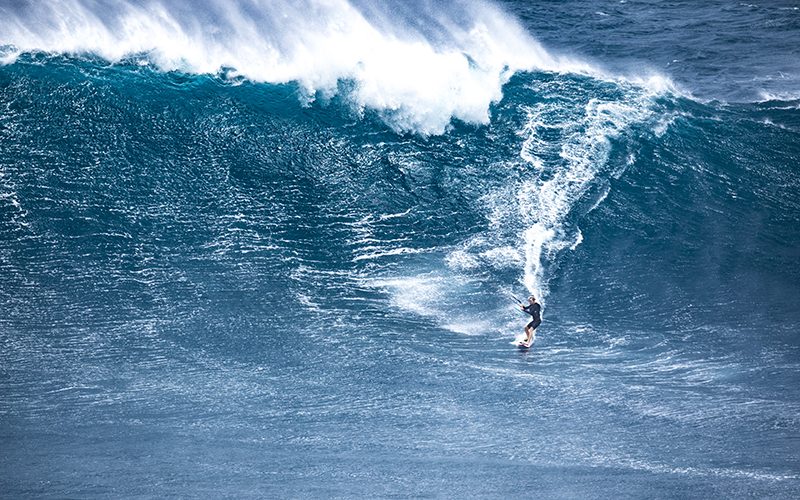 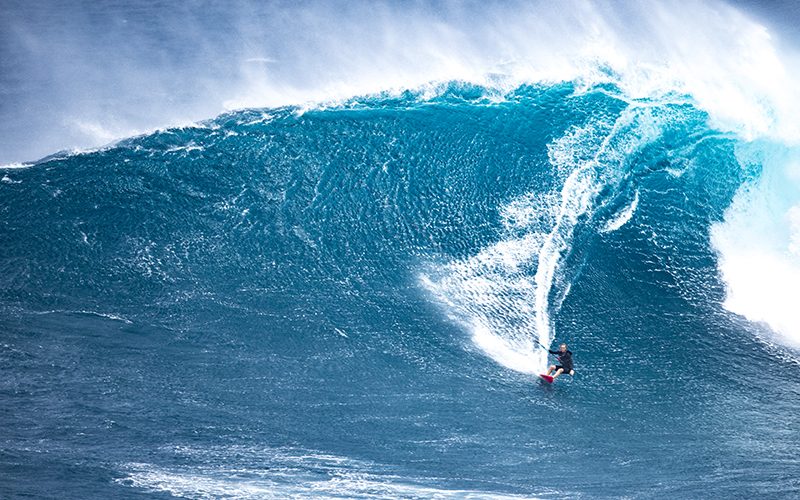 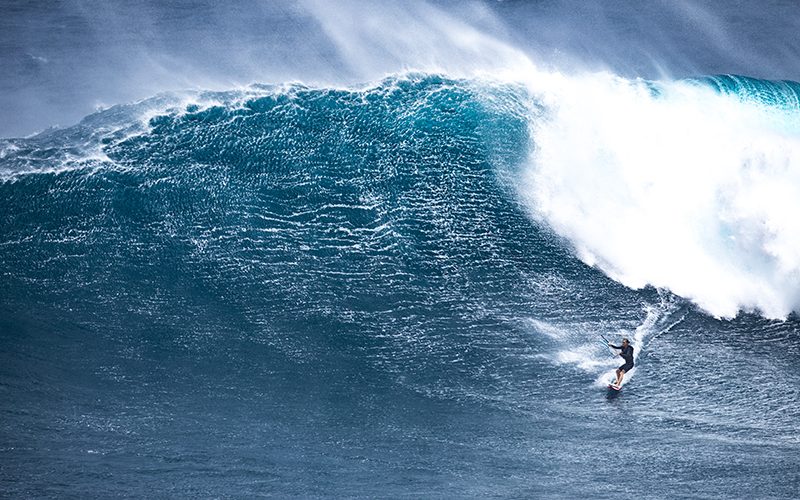 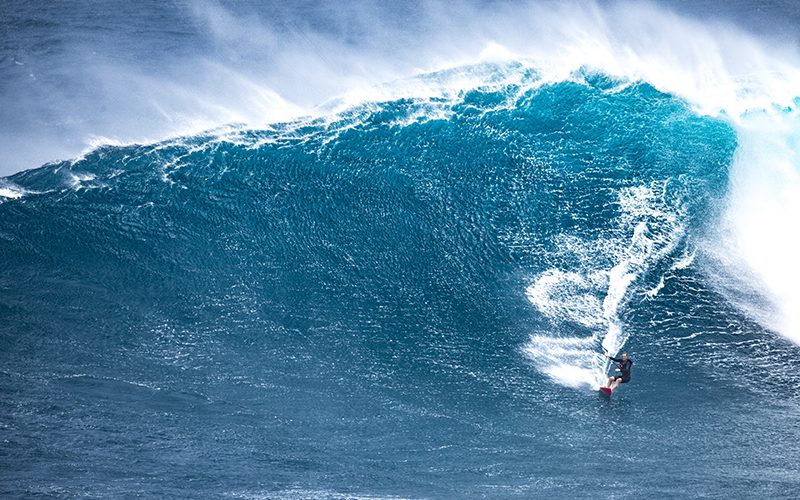 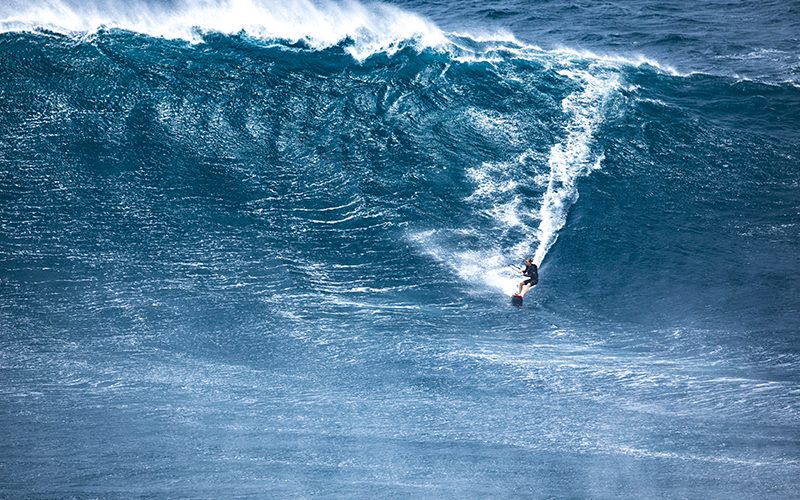 Olivia
Nine years ago, after two weeks of kite lessons during a holiday to Maui, my mum purchased my first kites for me at age 14. For the next few years, I was only able to intermittently kite during some school holiday trips to Maui in the summer. Five years ago I was given a surfboard for the first time by Patri McLaughlin. Not having any idea how to even wax it, I was given endless pointers by those around me, and gained the confidence to give it a try. I was hooked from the moment I completed my first tack without sinking. Flash forward three years, I graduated from college and moved to Maui. It has now been two years that I have been able to kite during every swell with windy conditions.

My passion is kitesurfing in big waves. This interest peaked when I moved to Maui. This is because catching large waves with a good wind forecast is fickle. When I lived on the mainland, I was solely subject to the conditions that were provided to me during my one week visits to the island. Once I moved to Maui, I was on the island during every large swell that lined up with wind. I made it a purpose to be out on the water during each of these swells. The more confidence I gained during each session, the more I wanted to push myself to kite even bigger waves.

I gained confidence kiting big waves at two spots on Maui: Lanes and Sprecks. A couple of years ago, I kited 15 foot waves at Sprecks and was definitely way out of my comfort zone. I was surrounded by friends and Patri, all yelling me into the waves. I remember one wave that I couldn’t out-run, as I lost all power in my kite. The lip broke right behind me and I blew up into the air. Somehow, unbeknownst to me, my foot kicked the quick release. This occurred as I was tumbling in the white water from the second wave of the set. I released the safety and my kite flew away from me. I had a mile-long paddle in with my harness. From then on, I knew I could handle a bad wipeout in large surf. 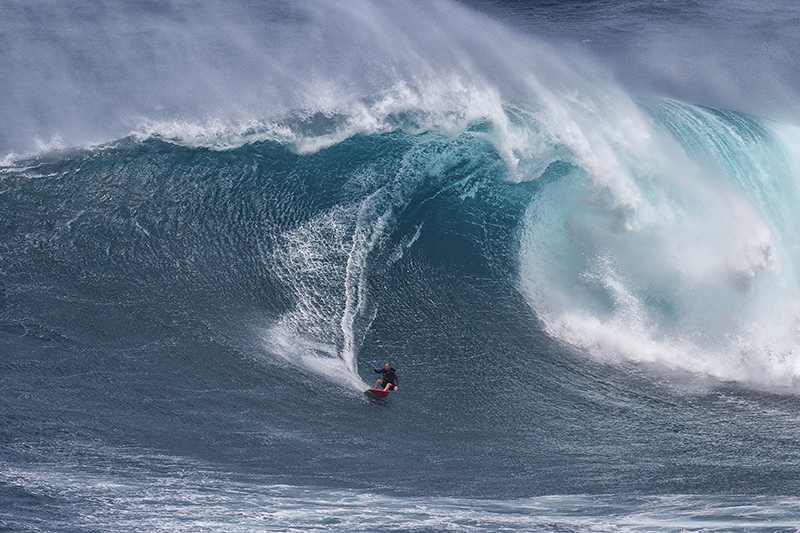 This year I kited Peahi and caught the biggest wave of my life. Before the session, I was so excited that my adrenaline masked any nerves I may have had. Patri, Sky Solbach, and myself arrived to the wave on the jetski and the wind was perfect to pump up a 6. Patri told me where to line up on the cliff and I was out there as fast as possible. Halfway into the session and I saw a large set on the horizon. I tacked in front of the first wave of this set. I put my head down and pinned it as fast as possible as my board began to speed wobble. The first two waves of the set passed me, and I was in a good position to catch the third wave. Before I knew it, the wave began to stand up down the line, and I realized that I was very deep. I started to fly down the line, hoping to have enough speed to make it around before it broke on top of me. I was going so fast but somehow ignored the possibility I could catch an edge. I looked back at a huge barrel right behind me as I came flying into the channel. I rode up to Patri (who was running safety for me on the jetski) with a huge grin on my face. I look back at it now and wish I could have been a little deeper when it was barreling. It was still the best wave of my life.

This article originally appeared in TheKiteMag #26. To subscribe, go here.

Big waves your thing? We’ve got some of the most famous big wave locations on our books. Check out the options at KitesurfHolidays.com 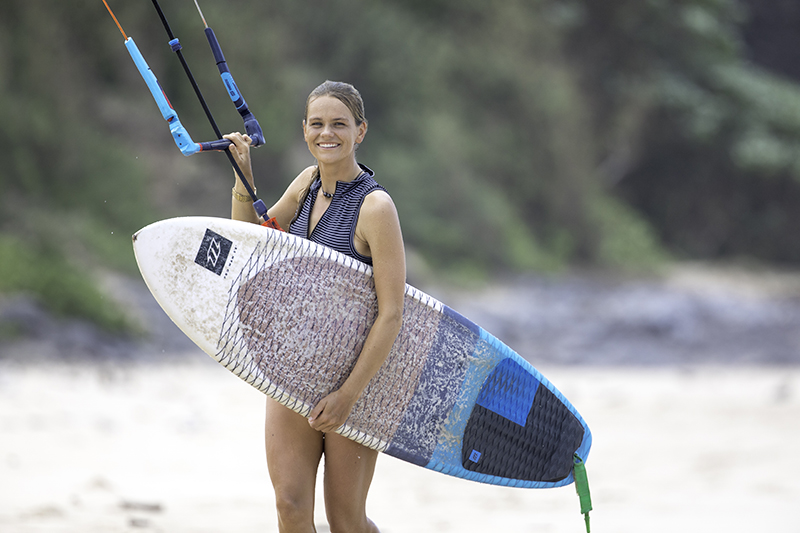