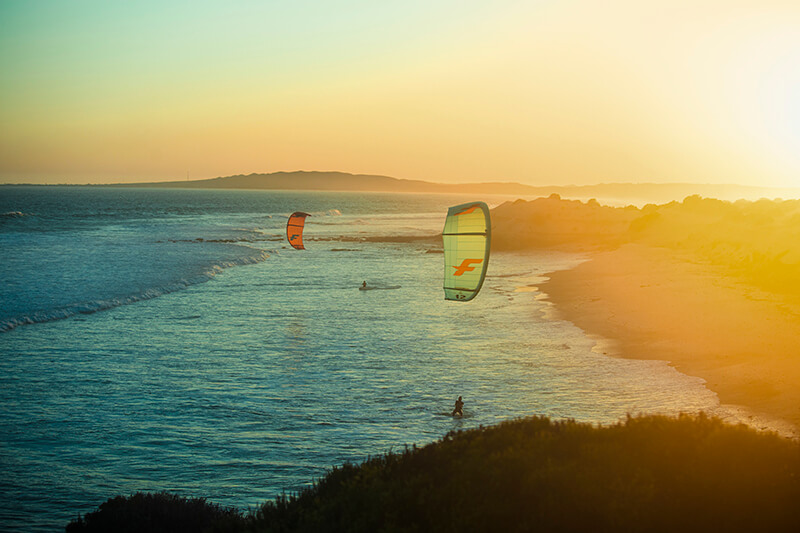 When it’s the 15th anniversary of one of the longest-running and best-selling kites of all time, where do you head for the photoshoot? Well you splash out on Mexico of course, the land of Los Bandidos.
Team rider Paul Serin gave us the lowdown on the trip. It wasn’t pistols at dawn, but there was an unfortunate stabbing…

One thing we’ve learned from 2020 is that people are adaptable. Last year’s photoshoot in Corsica was, in the end, incredible despite all the twists and turns of the pandemic. Heading to Mexico for this year’s shoot, while some countries still have their borders closed, and with no guarantee of what the pandemic will bring next, was once again a challenge for the whole team, but a challenge we were all ready to take on. Our lives as riders had changed so much – we were used to chasing the wind and waves, and in the blink of an eye everything had stopped. So when F-ONE came up with the idea of going back to the origins of the Bandit for its 15th version, I once again felt the excitement of trips past. Seeing the faces of the team at Madrid airport, everyone had a sparkle in their eye, like we were back in our old lives.

Mexico is a country I’d never been to but of which I’d heard so many good things. I was expecting a typical landscape as seen all my childhood in cartoons; I was not expecting such contrasts of scenery. The first few days we stayed near La Paz – cacti as far as the eye could see, sandy roads and a temperature on the limit of being bearable – yes we were definitely in Baja. These few days of rest did us all good before attacking the 12-hour journey north to Punta de Abreojos on the west coast. Seven of us piled into the SUV, and five into the van packed full of equipment. Once on the road the thermometer hit 49 degrees. We put the AC on full blast and devoured the asphalt at full speed. We broke up the journey at a roadside hotel, where I had difficulty imagining that tomorrow we would finally have an epic session…

“Everyone had a sparkle in their eye, like we were back in our old lives.”

The landscapes on the drive were incredible, but the tiredness of the journey and the lack of perspective made me doubt we would ever arrive at the coast. The next day, there were still six hours to go. I couldn’t wait to get there and dozed off so the time would pass more quickly. A last left turn and we were on a dirt road, finally getting close to the small village of La Bocana and our house, which was located up a hill with a stunning view of the ocean.

The spots around the headland there are varied and you can find all types of waves. On our first recce of the area we met some Americans who are regular visitors to Baja so could explain all the spots to us and said, “Can’t get any better than this right”. Well, the waves were tiny, with a light onshore wind, and I couldn’t help being skeptical of their advice even though they visit Baja two months of every year. We decided to surf while waiting for the wind to pick up. The color of the water was super green and the presence of stingrays made it feel a bit ominous. We caught a few waves, then the wind slowly picked up. Mitu and Hendrick kicked into action. Even if only the wave riders were going to enjoy the session, it made me hopeful again that conditions here would work and that we would score.

The next day we swapped to twintips and the Bandit. We found a well-oriented lagoon but sadly found ourselves on big kites barely able to jump. At least it was ideal for taking a group photo of the new Bandit. Meanwhile, Mitu and Hendrick had gone off on a mission and came back all excited that they’d found a barreling wave at Punta de Abreojos. We packed our gear as quickly as possible and headed to the spot, because the sun was already low in the sky. That’s photoshoots for you – you have to be ready to exploit every opportunity. The wave was close to the town, a barreling right-hander that breaks on a very visible slab. Not very motivating for me who likes less risky conditions, but Mitu and Hendrick were already suited up, ready to hit the water. One day, two sessions, the trip had well and truly begun. That evening everyone was exhausted, conversation was limited, and the meal prepared by our two cooks certainly went
down well!

The next day we decided to focus on Big Air and freestyle on the twintips, and found a fishermen’s estuary that seemed ideal with the wind direction. I went first to test the conditions. The wind was irregular and meant I landed a bit heavily at times, but I scored some good tricks, while in the back of my mind I was aware of the possibility of stingrays. I missed a board-off, and just as I started a body drag to recover my board, I felt a stab under my foot and a sharp pain – the feared stingray had got me… I returned to shore as best I could and quickly landed my kite. There wasn’t too much blood, but the pain was really getting intense. Alex, our guide, went off to ask the fishermen for advice, and they confirmed the strong presence of stingray in the area. There is only one thing to do, and that is to put your foot in water as hot as you can stand it. Fortunately the spot was not far from the house, so I was able to get my foot in a basin of hot water and wait for the pain to pass. During this time Maxime and Liam took advantage of the strong wind to send some kiteloops and big jumps. I was disappointed to miss the only day of strong wind, but the state of my foot meant it was impossible to put it in a footstrap…

The atmosphere in the house and between all of us was great. We all got on well, and with almost non-existent Wi-Fi our evenings consisted of wild UNO games! A few more sessions in the waves and in the lagoon, and it was soon time to leave La Bocana and continue the road trip. The van now looked like a giant mess of equipment. If we needed to get a kite from the bottom of the pile, we would have to empty the whole van. Next stop was Bahia Asunción, further north. I rested my head on the window and contemplated the landscape, again a contrast. There were no more cacti, just desert and small bushes. On our arrival we were welcomed like kings. With Covid meaning there were very few tourists, the arrival of a large group brought smiles to the hotel owners. The atmosphere here was different; we still had a view of the ocean but from a cliff, and below was an island full of sea lions that we could hear barking at all hours of the day.

We were told about a spot down the bay with waves and side-shore wind. We immediately set off to check it out. We discovered an untouched spot just below a sand dune, suitable for both freestyle and wave riding – the dream! I inflated the 14m Bandit and ran down the dune to the water. The wind was different to the other spots, with more power behind it, easier for boards-off and rotations. We would spend two days at this spot before returning to La Paz. A contented tiredness started to be seen on the faces of the team. Even though the mornings were quite calm, we were shooting until sunset every day. We knew the journey back to La Paz would be long, but there was nothing better than to tackle it with the feeling of having accomplished the job.

Baja California is a treasure, full of contrasts and breathtaking landscapes. The locals welcomed us with open arms, and even if though the road was tiring, the moments spent on the water were magical. On the day of our departure, the government decided to close the beaches… timing and luck were the two essential ingredients for a successful trip in the era of Covid. Hasta luego Baja, gracias por todos! ■