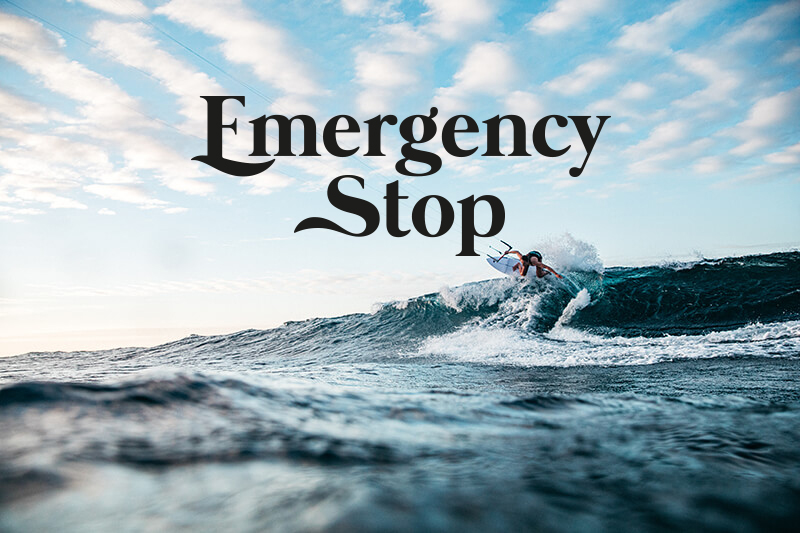 Travel to exotic locations may be one of the perks of being a world-renowned kite pro like Jalou Langeree, and her lifestyle might turn some of us several different shades of green with envy, but Covid-19 has forced her to have a rethink, and get back in touch with her Dutch roots. 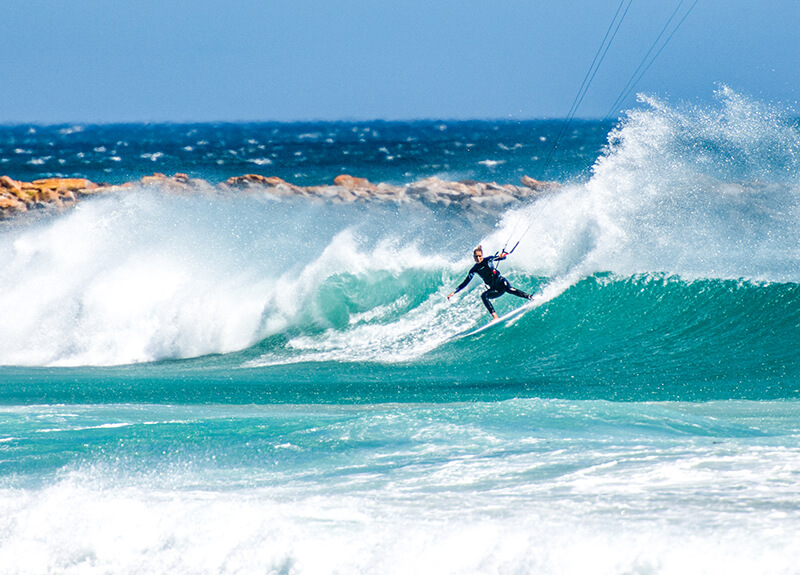 I feel like I’ve been living my life in a bubble – not the Covid-19 kind – but traveling between continents like it’s the most normal thing to do. Being forced to stop moving at speed, and spend some time at home, has made me question this normality – you could say the bubble has been popped. I’ve realized how much I’ve been on the road, and how little time I’ve had to spend with family and friends. And I’ve had time to reflect.

After another fun and busy season last year, things started slowing down around early November. I had a strong urge to travel to Cape Town and enjoy some of those early season sessions without the crowds. Cape Town is a place I like to call home. I’ve been visiting the Mother City since I was 15, and it keeps dragging me back. I often ask myself why I keep going back; people who have visited Cape Town know the feeling. For me, it has something to do with the endless diversity. There is fantastic food, fun people, excellent conditions for all watersports and disciplines, and plenty of cool activities when you need a break from kiting. Plus it’s affordable.

It was just awesome to go back to South Africa for about three weeks in November and spend some time with my brother, kiting together like in the old days. We are both so busy living our own lives, Kevin especially, after having his daughter Malie and launching his own brand. Life had been hectic, and it felt like there was never enough time to properly catch up. But we finally did during those three weeks.

The day before I left, Kevin, Lasse Walker and I made a little road trip to Paternoster, a spot about 135 kilometers from Cape Town that is popular among windsurfers. It works well on lower tides, big swell and a south-westerly wind direction. This was the first time I saw Paternoster show its magic. Our first glimpse of the waves made us jump out of the car and run to take a closer look at the rolling swell. Waves peeled off the rocky point of the beach, running all the way into the bay – it looked absolutely PRIME, and it was the first day in three weeks we had proper swell. I was screaming at the top of my lungs in pure joy. We kited until the tide made the waves slow down, and we left the beach with big smiles on our faces.

On our way back home, I got a text from North to see if I was up for a trip to the Philippines straight after the Mystic shoot in France. It felt a little overwhelming, as I’d expected to leave Cape Town for only ten days and return back to SA to enjoy the rest of the season. But I knew that I always wanted to kite Kingfisher in the Philippines, so my decision was made, I was going. 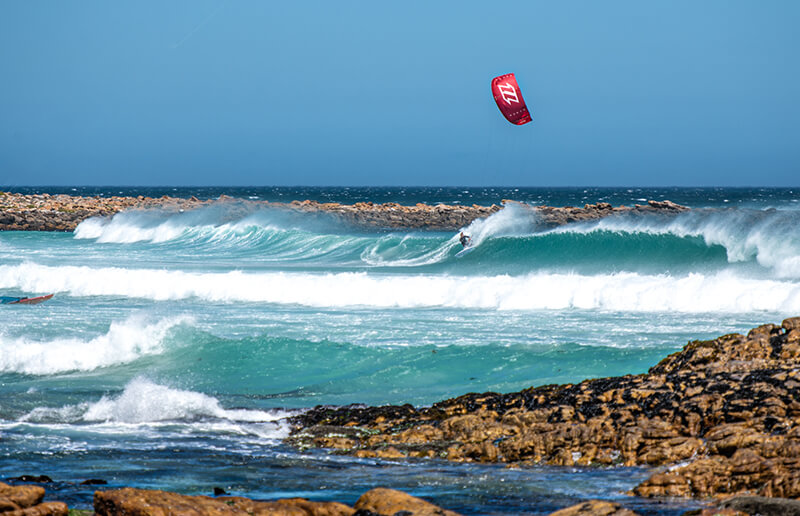 I left Cape Town with a good feeling, knowing that I would be back for more. I had a quick little pit stop at home in The Netherlands: just enough time to enjoy one night in my own bed and drink a coffee with Mom and Dad. The next morning, I traveled to Paris to shoot the new Mystic 2020 winter collection. At the airport, I met up with my teammates Oswald Smith and newbie Camille Delannoy. Before driving to our home base for the next five days, Oswald pushed me to drive to Paris to soak up some culture, eat macaroons and see the Eiffel Tower. He loved it (even after his 28-hour trip from Cape Town). The following days were packed with shooting, which is always good fun with the Mystic crew.

After five intense days, it was time to head home and catch the next plane to the Philippines. We were supposed to fly home, but we ended up driving because of massive strikes in France. So after a full day of shooting, we had to drive home through the night. This was pretty exhausting, but Ydwer and I needed to be back the next day to catch our flight to Manila. We made it home safe, for a couple hours of sleep, before moving on again… 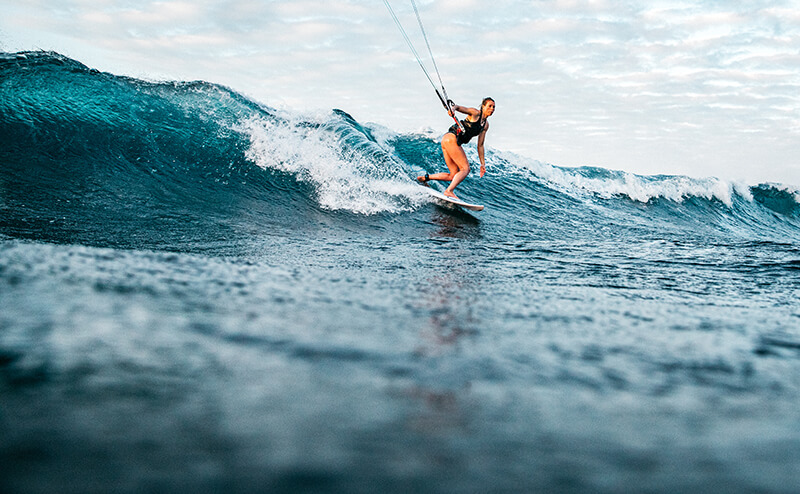 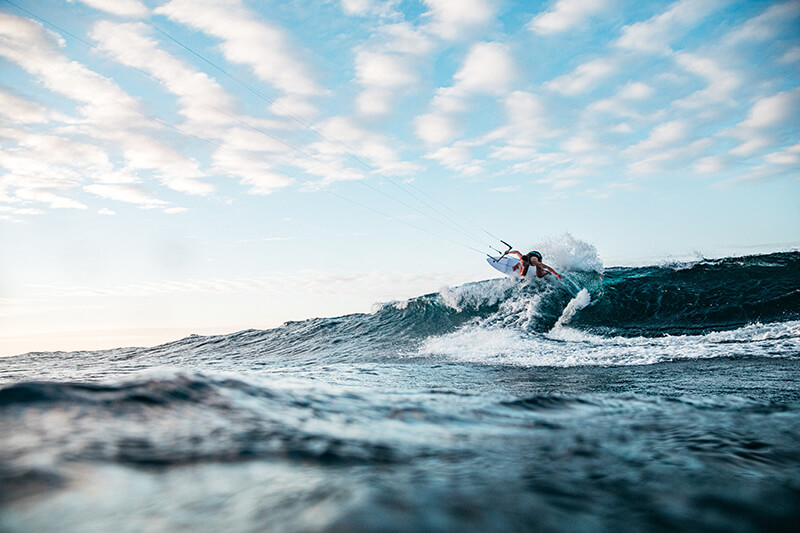 The first time I visited the Philippines was for a massive television show called Expedition Robinson, which is similar to Ultimate Survivor. We lived on a desert island for three weeks with only water and sunscreen – no food, no toiletries, no comfort, no kite. This time I got to experience it in a totally different way – again a desert island, but this time with a kite. We were out to shoot the new North Reach, the kite that does it all. I was very excited about our first stop which took in the famous wave, Kingfisher, located in the north of the Philippines.

A short domestic flight from Manila and a two-hour drive through beautiful rice paddies and green, jungley landscapes, and we were warmly welcomed by Mon, the owner of the hotel right on the spot. The weather was grumpy, and the ocean was wild, a big white mess of waves crashing together. It wasn’t quite what I expected, but we were positive anyway. The team was reunited, and we were all amped to get some epic content. 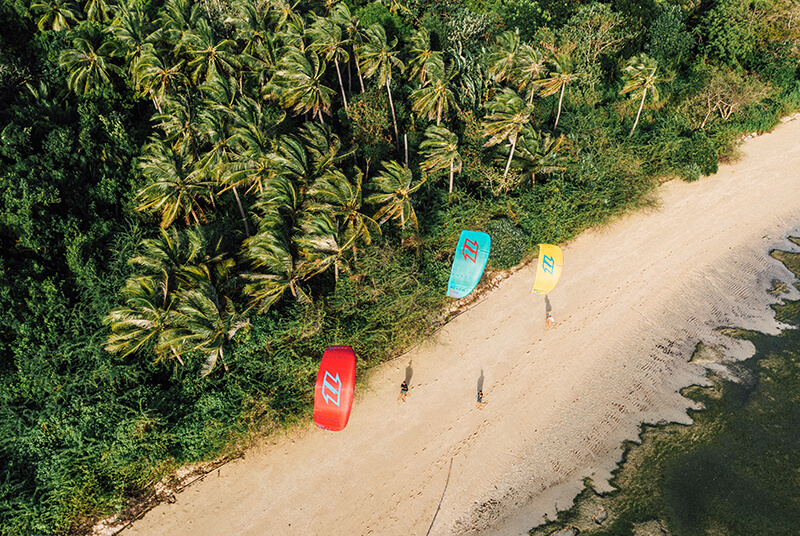 The next few days were fully packed with finding the right shooting location for waves and chasing the sun. We started shooting at a crazy beach break where the waves got super hollow and crashed on dry sand – the perfect combo for Jesse to get barreled: he owned it! He never came out of any of the barrels, but he kept smiling. Jesse is such good energy to have with you out on the water; he has this endless stoke and motivation. I’m a goofy rider and ride lefts 80% of the time, so it was nice to finally mix up my stance. I really enjoyed the session as it was a little challenging. It definitely wasn’t an easy wave – no perfect down the line hacks – more the quick one-hit-wonders where you try to escape being pounded on the dry sand.

Eventually the weather gods worked in our favor: the skies cleared up, and so did the waves. We finally had our first session at Kingfisher. It’s a fast, short wave with multiple peaks and takes a couple of sessions to get used to. It was day four, and we were getting the shots in the bag. The Reach showed her true colors in all the conditions we had, and I was pleased about the way it performed in the waves, feeling light and effortless. Being out on the water with both Jesse and Nick was very entertaining – the time flew by, and we almost forgot that we were actually shooting.

After five days, we moved on to the south of the Philippines, to capture the final part of the Reach shoot, which was focused on freeriding and foiling. It was a completely different synergy, with higher temperatures, more sun and flat water. We traveled to different desert islands by boat, with no other kites in sight, which was a pleasant change.

Shoots are super-fun but also exhausting; we all looked back at a brilliant trip and were happy to move on to our homes to recharge. 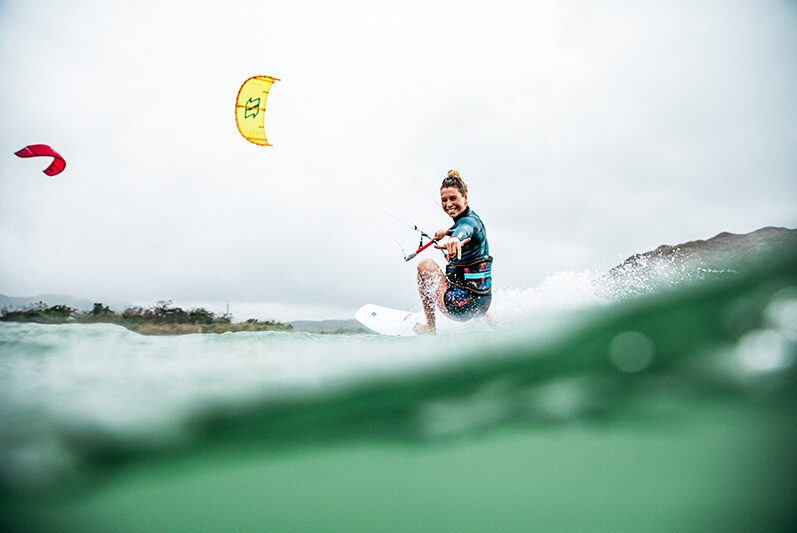 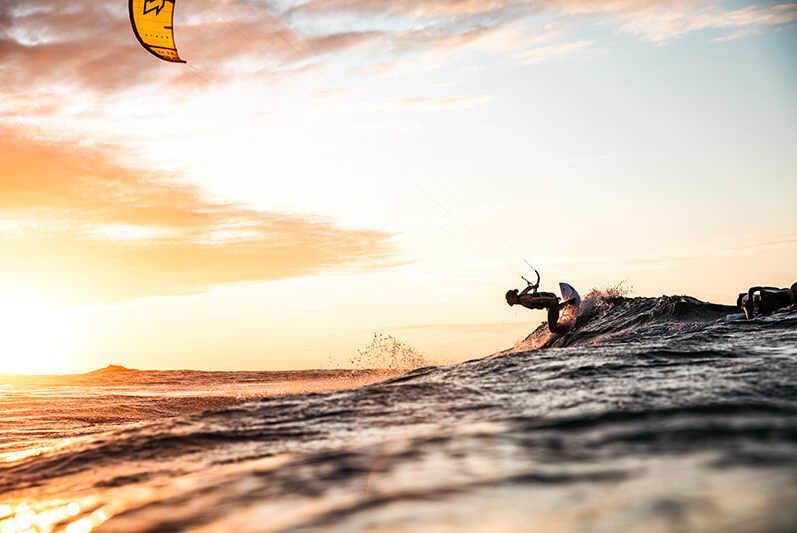 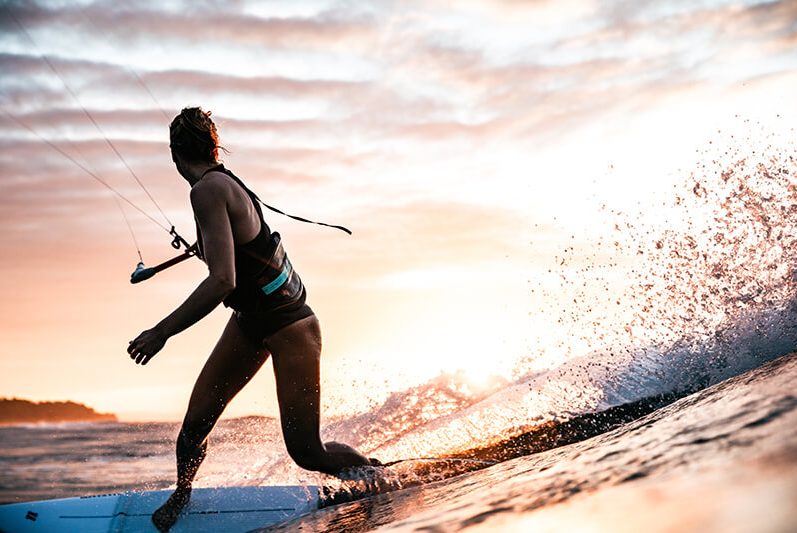 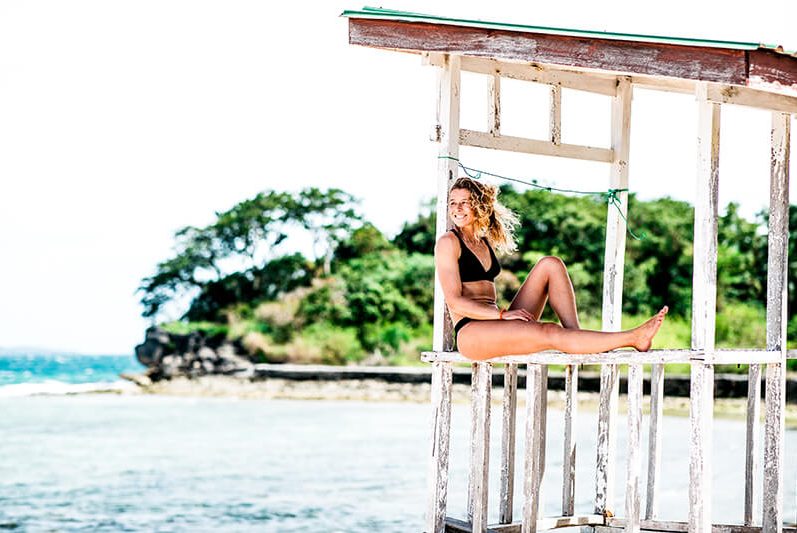 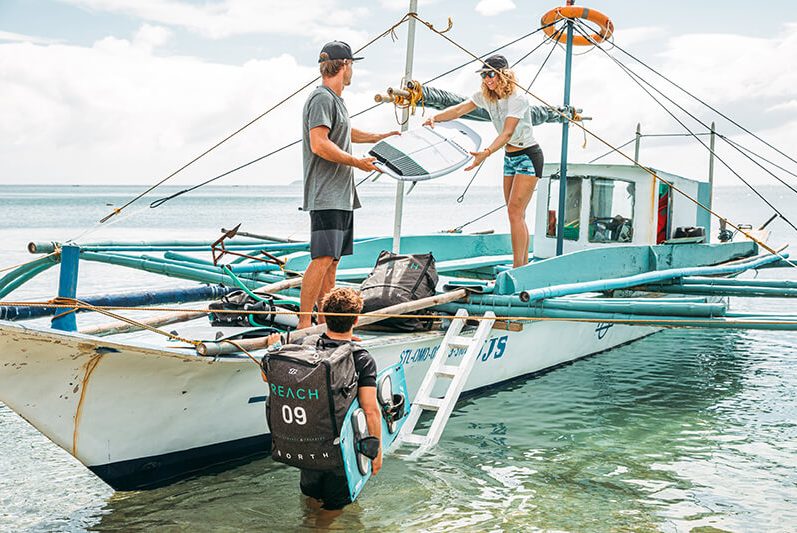 There wasn’t much time to recharge. An 18-hour trip took me back to the Netherlands, and 20 hours later I was back on the plane to Cape Town. This is the most hectic traveling I have ever done. Three months in Cape Town flew by, like it does every season. People often ask how the season was – well there was a lack of good swell so it could have been better, but I had my fun sessions at Scarborough, just not as often as I hoped for. But any day on the water is a good one, and nowadays – if you are into multiple watersports – there are plenty more options too. 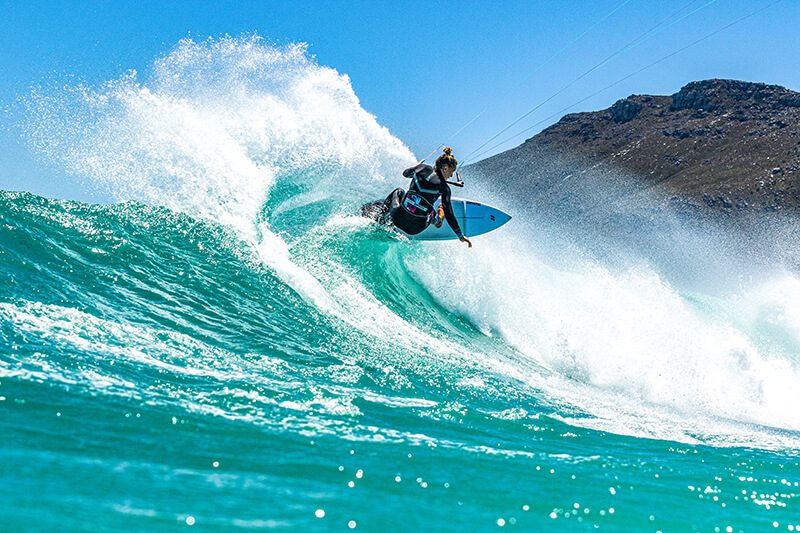 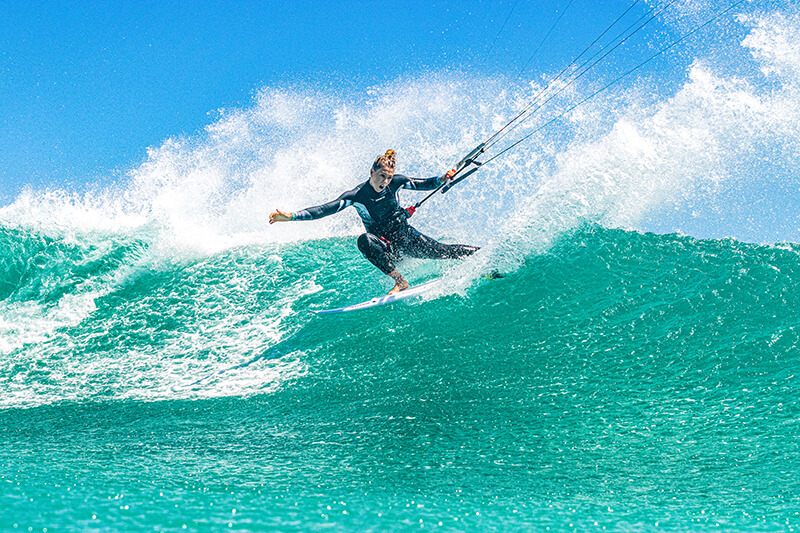 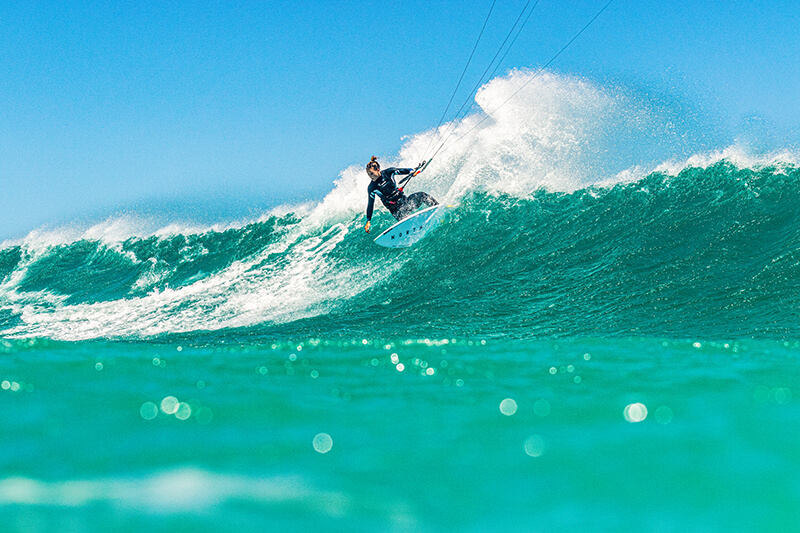 Covid-19 arrived with a BANG. I got back home on March 16th and started realizing what Covid-19 was all about, as in Cape Town there weren’t yet any restrictions when I left. My schedule was thoroughly planned until August, but none of the trips ever materialized. I was at home, like everyone else. In Holland, we were lucky we didn’t have to experience a complete lockdown. I was still able to kite and be outdoors, just with the 1.5m social distancing.

It almost felt like it couldn’t have come at a better time for me, which might sound strange, but Covid-19 does have a positive outcome for some of us. I’ve been living my life as a pro kiter for over 15 years, and it felt like being on a fast train, where I kind of lost myself for a little bit. I always had a constant feeling of fear of missing out when I was in the Netherlands, as home didn’t provide the perfect set-up to be a pro wave rider.

I now look at home through different eyes. I’ve been able to appreciate where I’m from. I’ve seen the spring flowers blossom in all colors of the rainbow. I’ve made time to explore my home country and to appreciate the sessions I have at home. Holland has been great, I’ve had some excellent foil surf sessions, foil downwinders and even a freestyle session with Annabel.

Do we really have to travel the globe in the way I did last year? I love to travel, to discover new places and understand different cultures. But perhaps I’m keen to change to a more sustainable way of traveling, spending more time and doing multiple projects at one location. So, in that respect, Covid-19 has opened my eyes. And perhaps the emergency stop was not such a bad thing for me… ■

This feature originally appeared in TheKiteMag #38. To subscribe, head here.