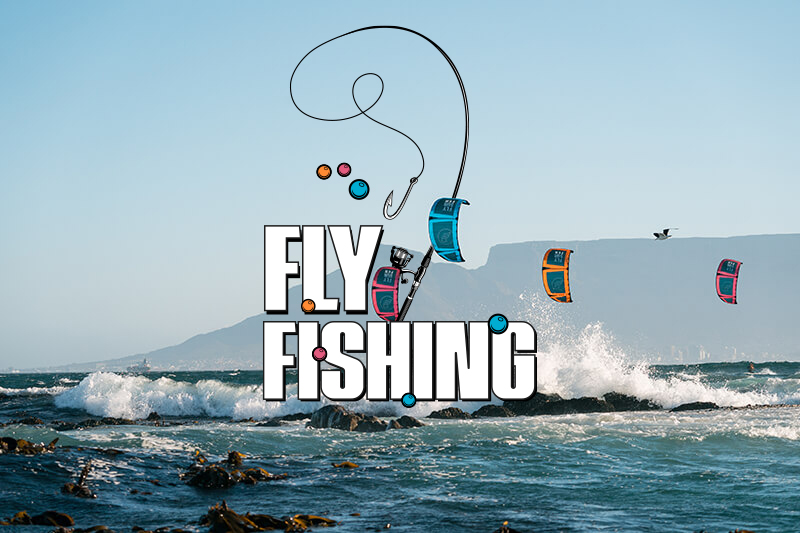 Different countries around the world imposed a bewildering variety of regulations when it came to Covid lockdowns, and those that closed beaches have had kiters scratching their heads to make sense of the rules. The Flysurfer team in Cape Town found an ingenious way to ensure that their photoshoot could go ahead legally despite closed beaches there.

It was a flawless plan. It had to be, or we would have ended up crammed into the back of a police truck, playing rock paper scissors to decide who would be the one to call our Team Manager Ines to break the bad news.

With the Flysurfer team having just landed in Cape Town intending to do a product shoot, not being allowed to use the beach posed a bit of a problem… South Africa’s Level 3 lockdown and the beach closure that came along with it had some unusual stipulations. Creativity became the name of the game. It wasn’t that we disagreed with lockdown measures; it was the disproportionate application of the rules that had us scratching our heads. If people could pack into a gym or yoga class, play 18 holes at the golf course, or sit down at a restaurant for dinner with their friends, surely we should have been allowed to go kiting? It didn’t make a whole lot of sense, and the waiting game was a hard one. The thing is, people were kiting every day. They would sneak out over the sand dunes at sunset when the police would clock off and head home. They were getting away with it, for the most part. Even with a few dramatic arrests and fines levied against the illegal kiters, it wasn’t enough to deter the wind-obsessed masses.

We didn’t want to break the law, we just wanted to kite. So we waited patiently for news from above, assuming they would relax the beach closure after the holidays and let us back on the water. Unfortunately, the opposite happened. They redefined the beach to include the first 100 meters of land and sea, starting at the high tide mark. Rocks, sidewalks, slipways, and any surface adjacent to the ocean also counted as a beach. The loopholes were closing. The fishermen were the new kings of the beach. We must have spoken to the police every day for the two weeks before our strike mission, not because we had been caught breaking the rules, but because we wanted to get some clarity on what we could and couldn’t do. Some officers were friendly, while others were very much over having to chase kiters up and down the beach in 30 knots of wind. It seemed as if every officer we spoke to had a different interpretation on the beach closure and what the rules meant. Regardless, we stayed respectful and kept the conversations going, even getting a couple of cops to agree on a little challenge – if we could jump from the parking lot to the water without touching the beach, they let us kite – if not, they take us to the station! A risky proposition, but luckily the wind was onshore that day, so we went home to pore over the written restrictions and hatch a plan.

Our crew consisted of myself, Theo de Ramecourt, Alina Shalin, and Crystal Veness. Photographer Miriam Joanna and videographer Adam Sims would be there to document the mission. After collecting our fishing permits and flimsy fishing rods that likely wouldn’t have even pulled a tadpole, we called up our friends Emil and Matt – they had a rubber duck with just enough room for our little adventure. With so much gear and limited space, Matt would drive the boat, and Emil was on pickup and drop off duty. The wind was already blowing over 25 knots, so we prepped our smallest STOKE kites for the boat. We unrolled them in the yard, ran our lines, attached them, and rolled them back up. They were ready to pump and go. After double and triple-checking that everyone had a board, harness, wetsuit, sunscreen, water, mask, and fishing permit, we loaded up the boat and set off. We even brought along a printed copy of the lockdown rules, just in case we found ourselves in a position where we would need to prove the legitimacy of our claims. 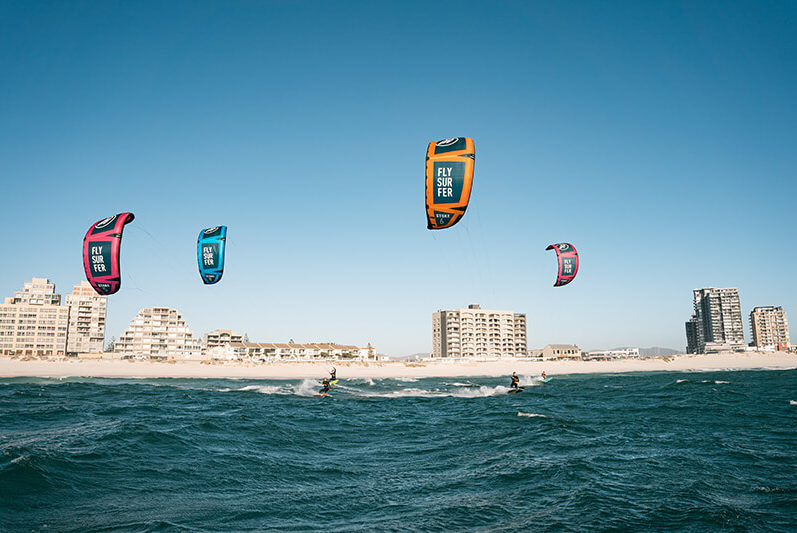 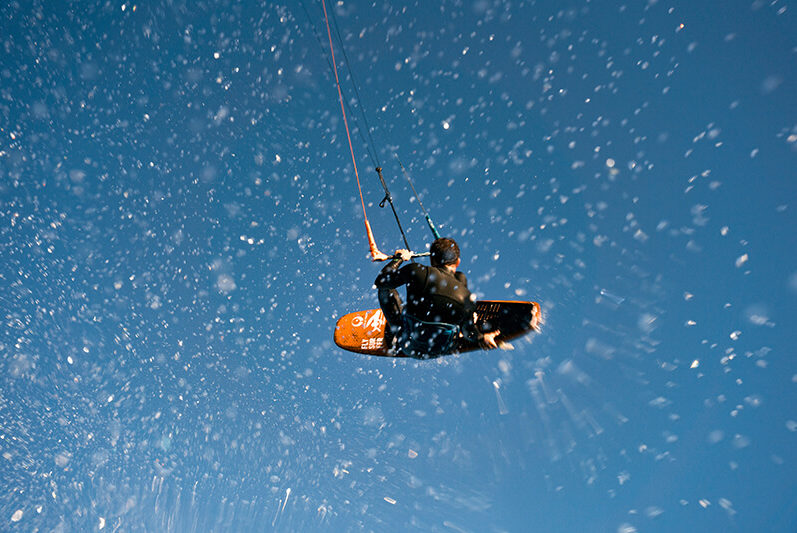 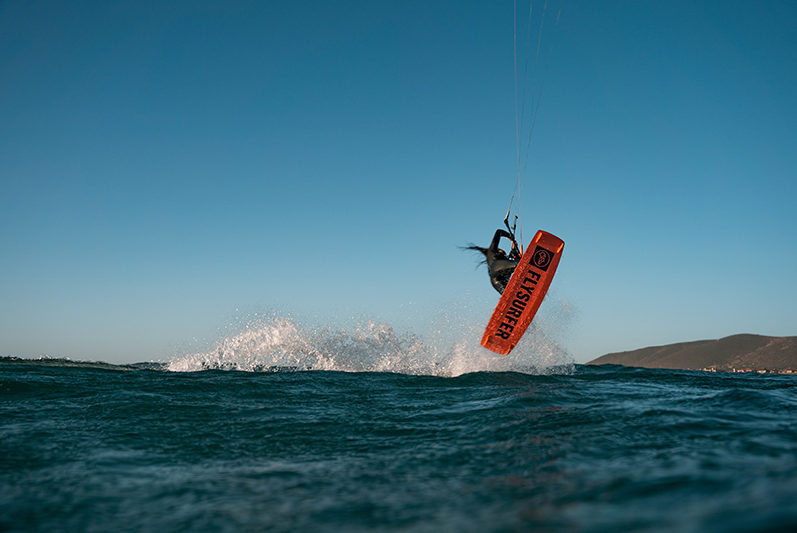 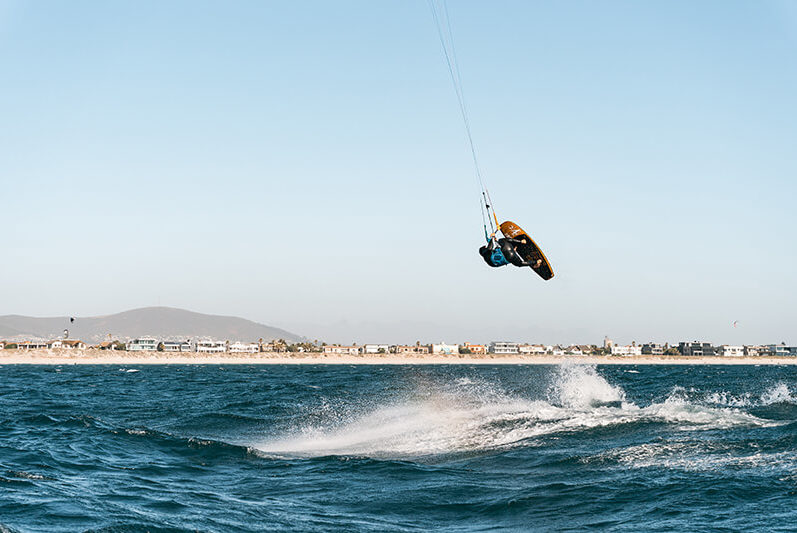 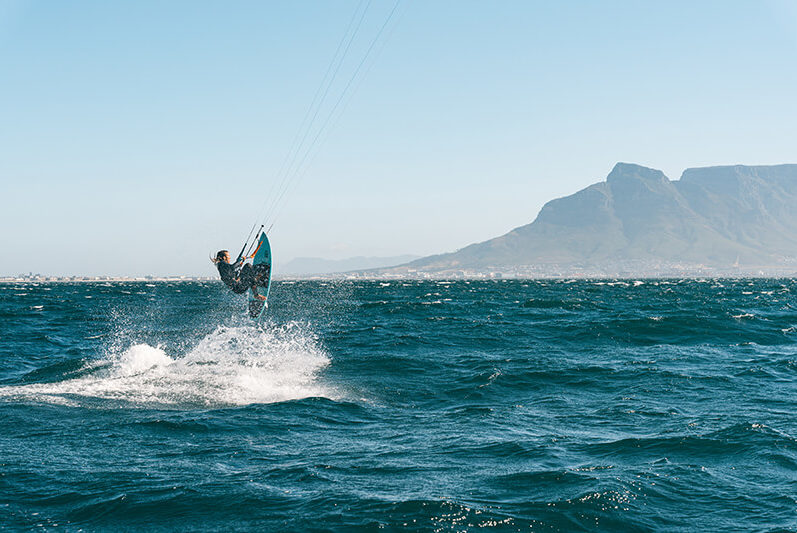 We arrived at the Woodbridge Island slipway only to find it too damaged from a recent storm swell to get the boat trailer down. Continuing upwind to the next slipway at Lagoon Beach, we found a suitable entry point. Emil drove onto the beach with the boat and the guys released it from the trailer into the shore break. Even though what we were doing was perfectly legal – and we had the paperwork to prove it – we couldn’t help glancing over our shoulder to check if there were any blue lights in the parking lot. As it turns out, nobody asks you questions if you have a boat and a bit of confidence. With all hands on deck, the team pushed the boat out into the water before piling on. Matt fired up the motor and we were off. We motored downwind to Sunset Beach where the wind was starting to clean up, and began the rigging debacle. Launching from a boat is always tricky, but launching in 30 knots and ocean swell is another thing entirely.

Luckily, Theo had buckets of boat launch experience and was so amped to get on the water for his first South African session, that he dove straight into pumping everyone’s kites. Alina hadn’t done a boat launch before, so I jumped in the water with the bar while Theo kept a hold of the kite on the boat. I unwound it while bobbing around in the swell until I was far enough away to launch her 5m. Alina jumped in with her surfboard and I went to pass the kite over, only to realize she was on a rope spreader! With a bit of fumbling, we managed to complete the handover and she was off. Crystal was up next and hopped in with a twintip, also taking a 5m kite to combat the heavy wind. I went for the 6m and Theo was on the 8m, both of us on surfboards. With only a moderate amount of chaos, we managed to get on the water and get the session going. After weeks of waiting for a session, the stoke levels were at an absolute maximum. We didn’t have a worry in the world, because we knew we were keeping it legal. We cruised downwind past some of the rebellious kiters that had entered the water from the beach, and found a section of the sea where we were alone. The main goal of this session was to get wet and have fun. Trust me when I say that we took our assignment very seriously!

With the swell picking up as we carried on downwind, we dipped in and out of the waves, doing some hacks and throwing some strapless freestyle moves. This was the first time I had met Theo and I saw a side of him I didn’t expect that day! He’s the European Champion in kite foil racing and unstoppable on the VMG. I knew the man was fast, but I only realized he had some serious tricks up his sleeve when I looked up to see him doing a strapless kiteloop higher than mine had been! 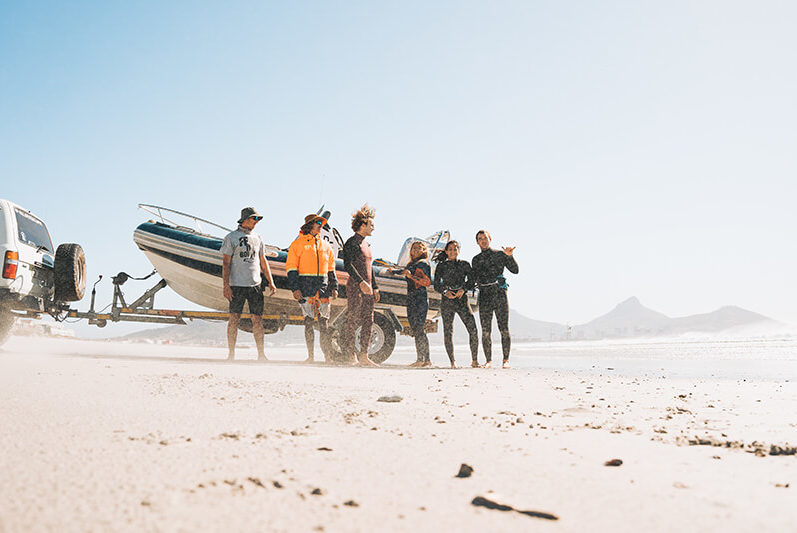 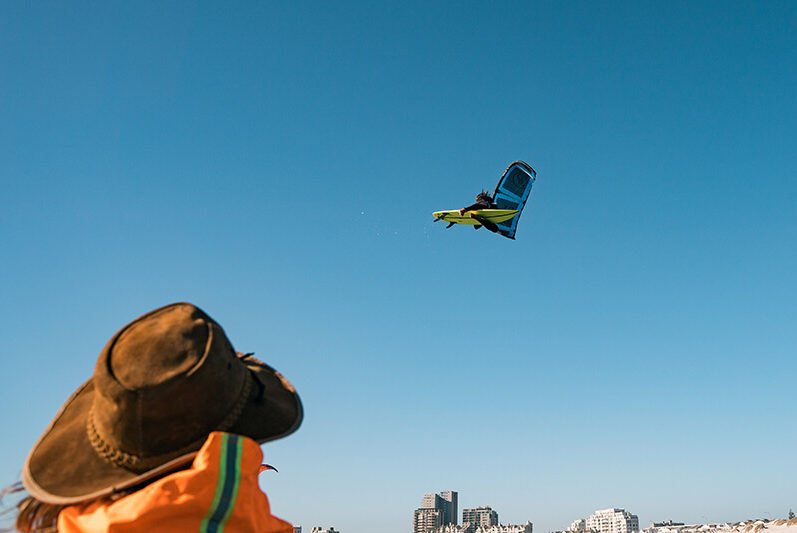 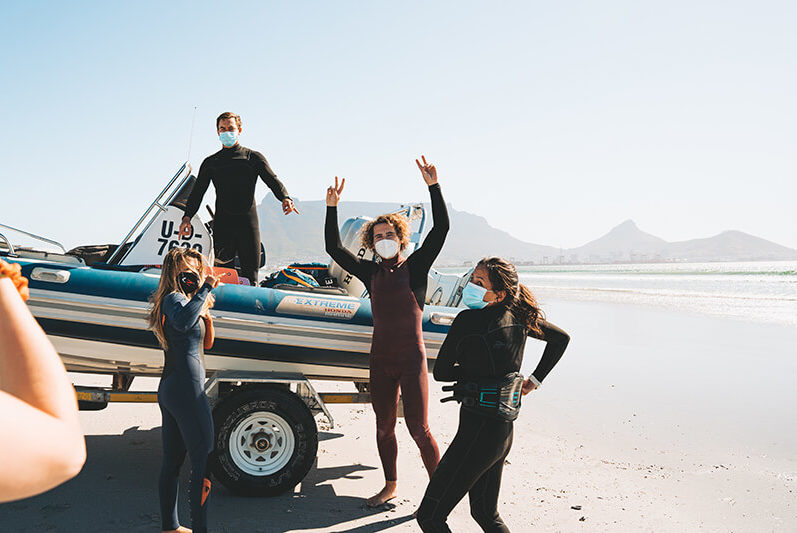 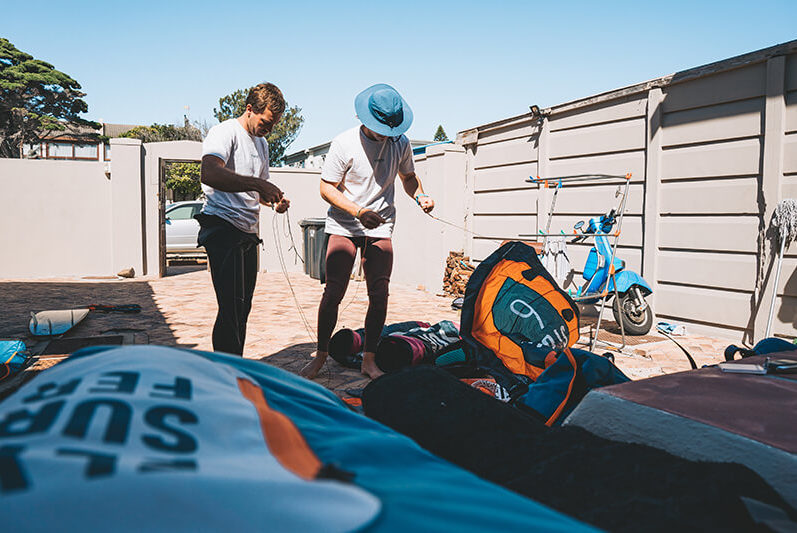 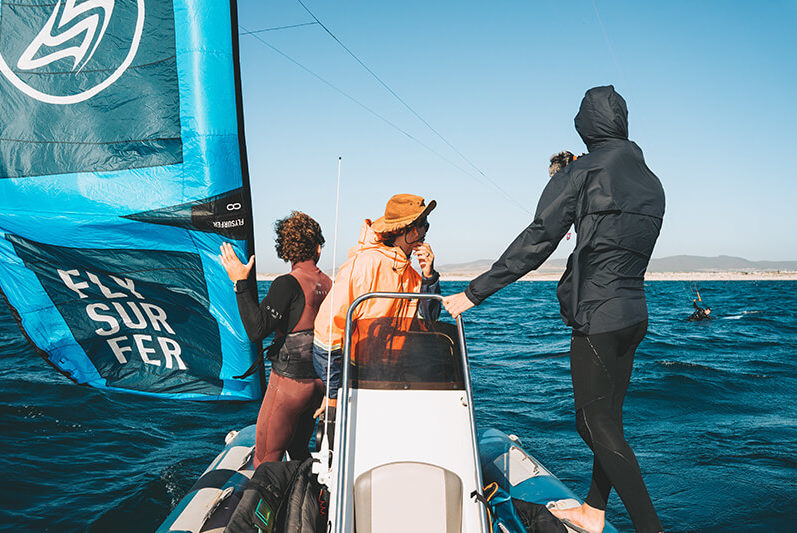 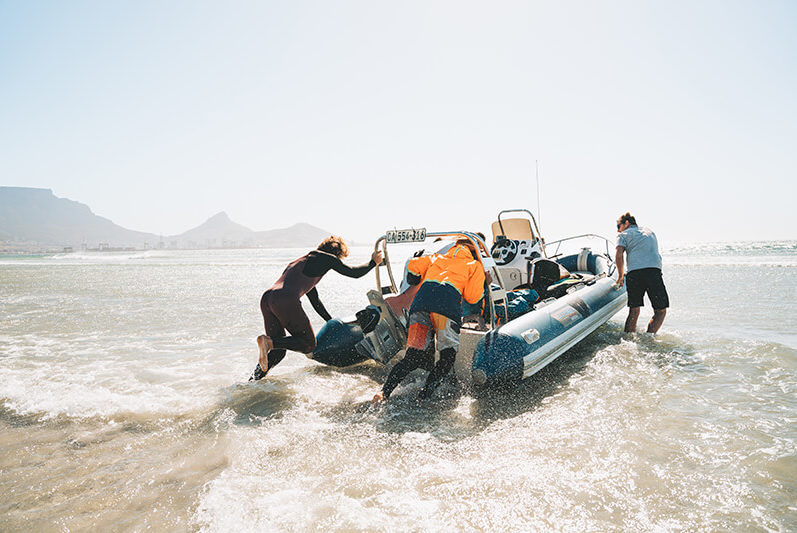 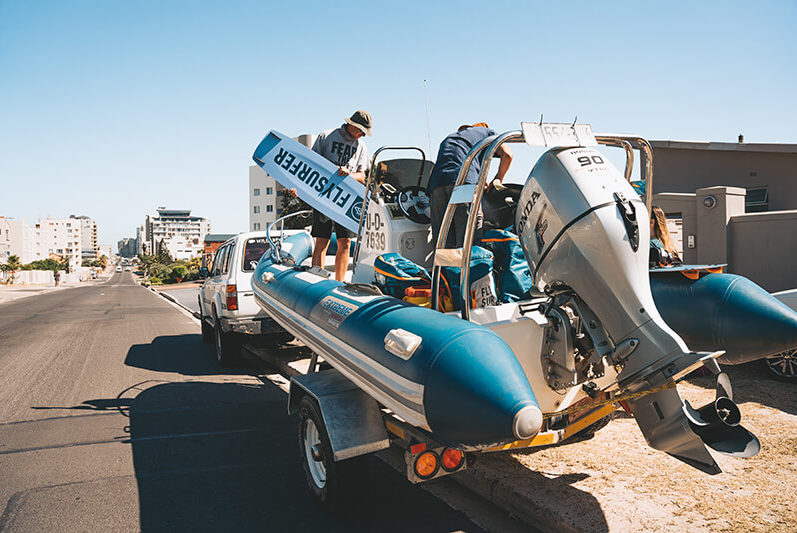 When we passed the police trailer stationed at Kite Beach, they didn’t even give us a second glance. Emboldened by our success, we sent it even harder. It was great to have the boat by our side as we rode. We could swap boards if we wanted to mix things up, and pop over to check on Miriam and Adam to see if they needed us to be riding anywhere in particular. They were as stoked as we were to finally be out on the water and filling up some SD cards.

We see a lot of the same content and angles coming from Cape Town, but with the boat we were able to get into spots that offered some completely fresh perspectives. We tucked into Small Bay to explore the rocky, kelp covered ocean scenery and caught a few waves as we cruised down into Big Bay. There’s a small island on the downwind part of Big Bay where Matt dropped anchor. We rode in that spot for a while, chasing seals and trading high fives as the sun dropped in the sky. When Miriam and Adam were ready with their water housings, Matt dropped them off in the waves which were now arriving in clean, overhead sets. We settled into a rotation around them, hitting waves and doing tricks over the cameras.

The day was slipping away as we enjoyed our last hour of freedom out in the ocean. We had to get the boat out of the water and get home before the 9pm curfew, but we wanted to take advantage of every moment that we had. We rode until the sun had set and we couldn’t feel our toes anymore. Then, we rode some more. Who knew when we would have another opportunity like this? ■ 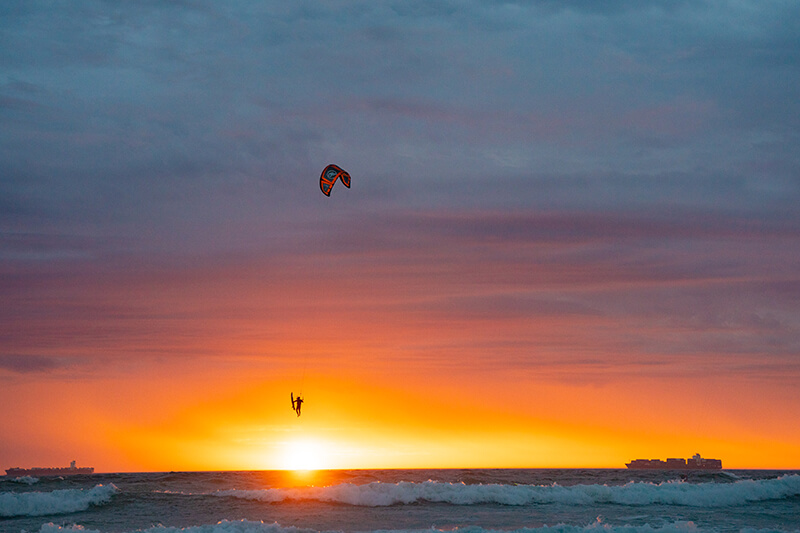