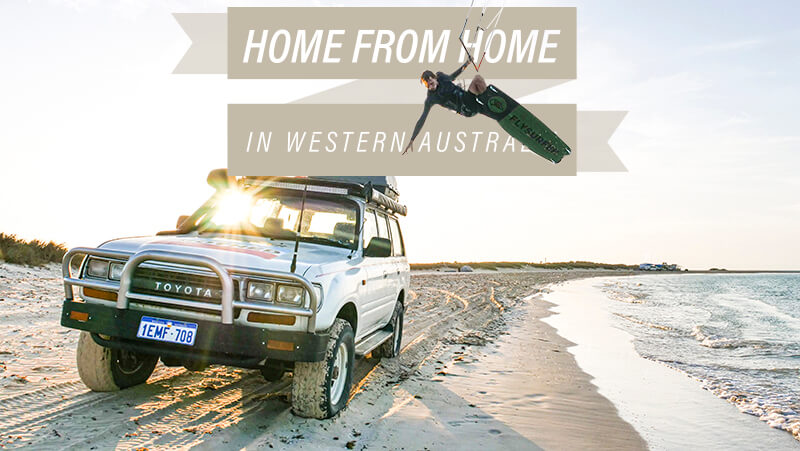 Olly Bridge and Meg Barnett hit Western Australia, and hit it in style. With their 4×4 – the Frothed Mobile – the full road trip was on, with plenty of sketchy tales, epic sessions and best-not-to-think-about-that-too-much sealife… 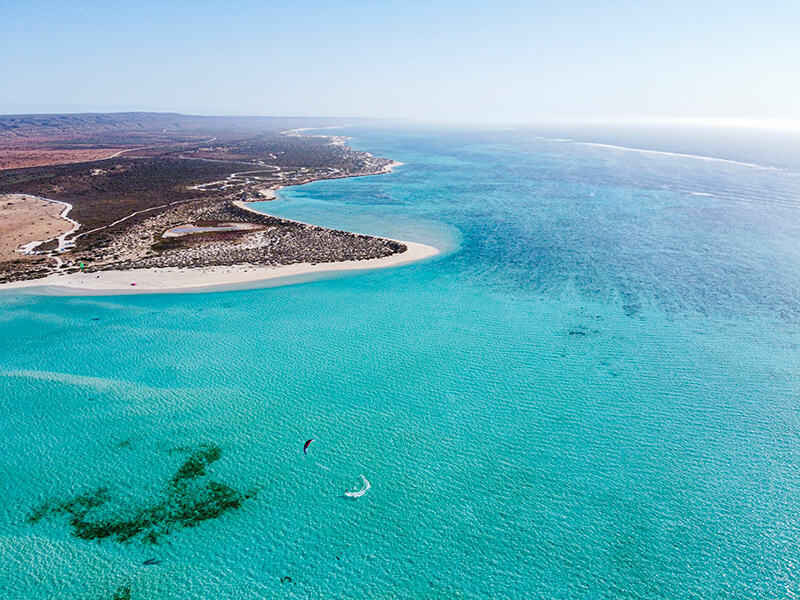 Seeking to escape the cold and grey British winter, Olly and I headed out to Perth on a 16-hour direct flight from London. We chose to visit Western Australia for a number of reasons: consistent wind, unchartered spots, the Red Bull Lighthouse to Leighton race, but most importantly, we both really wanted to visit the one other place on the planet also named Exmouth (the same as our hometown in the UK).

Arriving in Perth, our first challenge was to find a vehicle we could call home for two months to take us on the 9000 km round-trip, all the way up to Exmouth and back down to Esperance. Rental companies proved way too expensive and had low daily distance limits, not ideal when traveling a country almost as big as Europe. So, after almost purchasing a Toyota Prado from a time waster on Gumtree, we decided to rent a badboy Toyota Land Cruiser from our mate Mani in Perth, later to be named the Frothed Mobile. Eager to start exploring, we packed up our tent and fixed the life-saving air-con last minute before making the day-and-a-half drive up to Exmouth.

Thousands of tourists visit Exmouth each year between March and August to swim with the biggest fish in the sea, the whale shark. For us, since it was out of season, it was a quick photo with the huge Exmouth sign and straight on to the Cape Range National Park. Our first kite spot was Sandy Bay, a breathtaking bay of white sand just meters from our tent. Due to its location downwind from a small sand spit, the turquoise water was flat as far as the eye could see, making for ideal freestyle conditions. The first day we arrived, the wind was light and, despite other kiters waiting for wind on the beach, the light wind ability of Flysurfer’s 10m Soul meant I had the entire spot to myself. The next day we snorkeled all morning at Turquoise Bay and, when the wind picked up in the afternoon, we both had an insane freestyle session all the way through until the golden sunset. 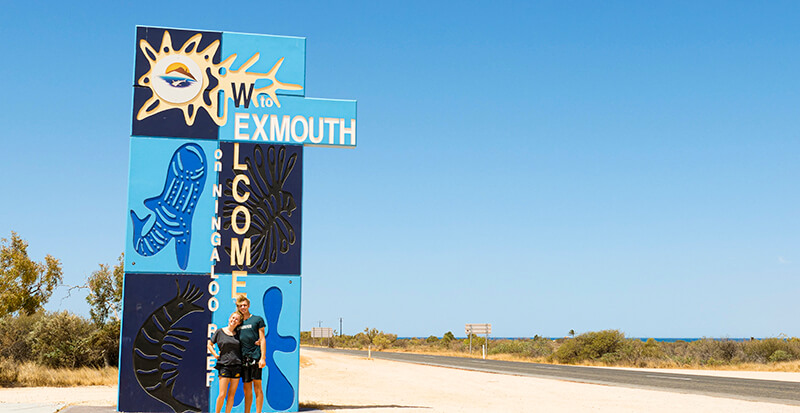 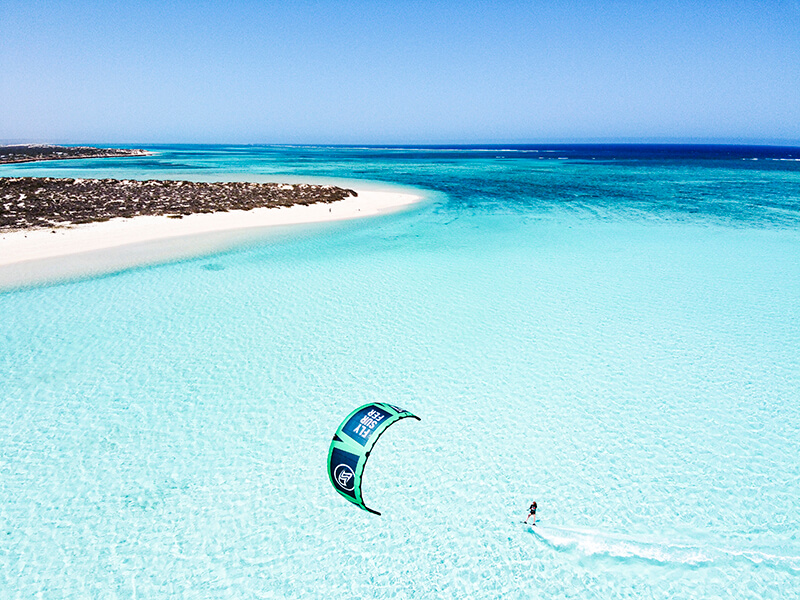 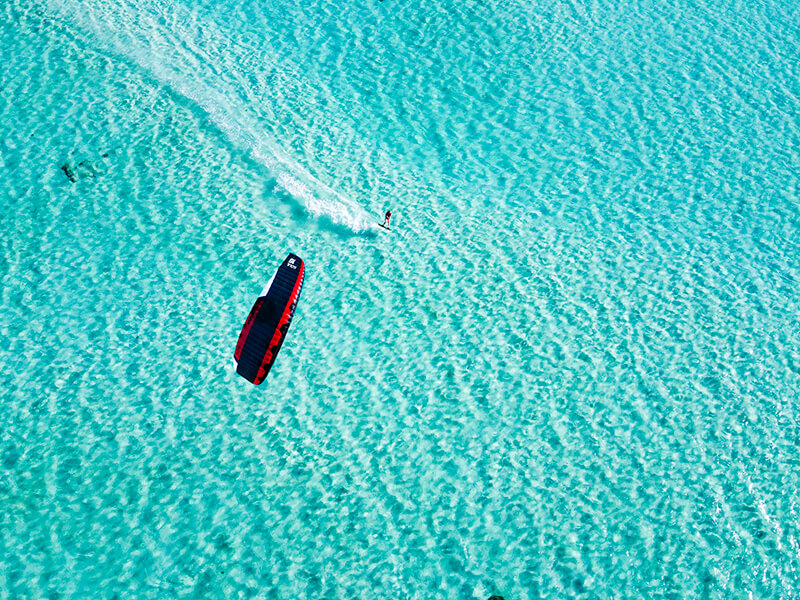 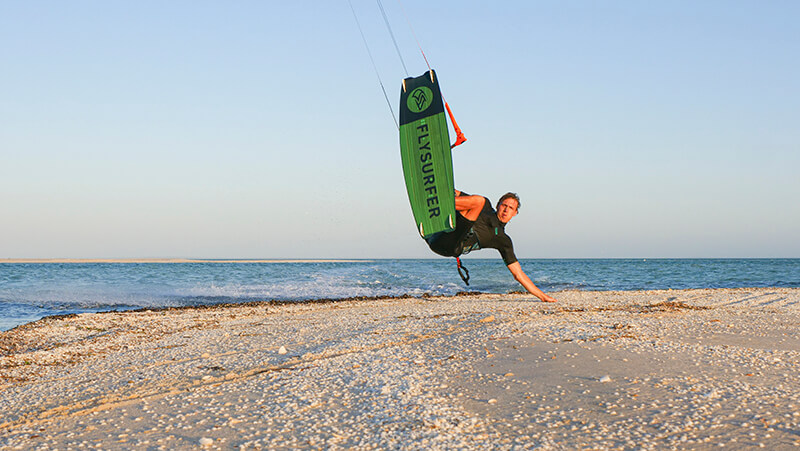 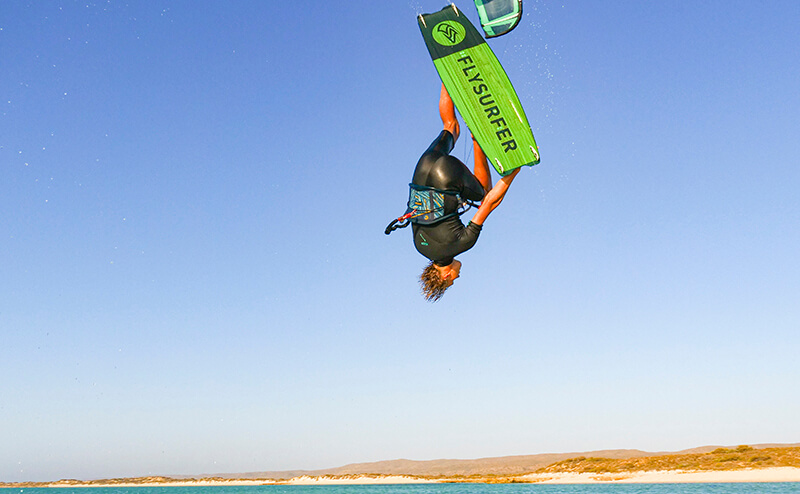 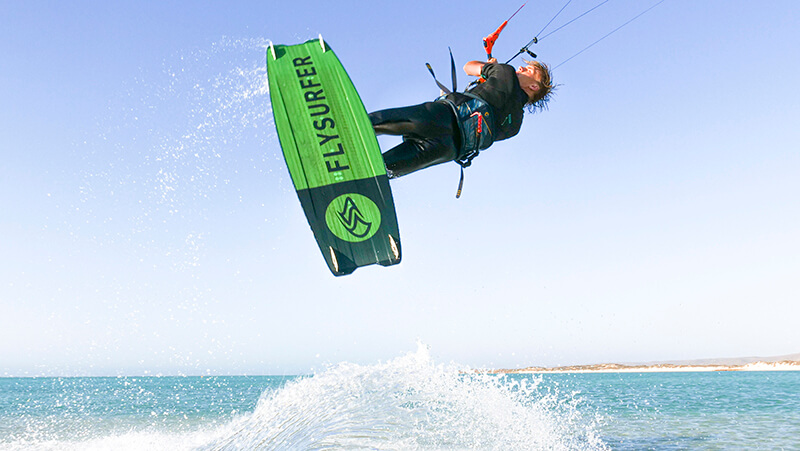 Next stop on the trip was Winderabandi Point. Until this moment, the hot and sweaty tent accommodation had both Olly and I wishing we had taken a campervan for the trip. But, as the Frothed Mobile beasted its way out of the Cape Range National Park, over Yardi Creek, and along miles of red sand road, we were reassured that the adventure could not have been possible without a 4×4. Situated on a ginormous sandspit, the camping at Winderabandi had no amenities, just sand… A key and a chemical toilet must be picked up from a very random iron-roofed shack-like homestead with a sign outside saying ‘do not get out of the car, honk horn for assistance’. A minimum of four nights’ stay must be paid to the old lady in the caravan office, whether you stay that long or not! When we finally arrived at the beach, I couldn’t believe that a better freestyle spot than where we had just been could exist. It’s no wonder the only other two occupied campspots were older kitesurfers set up for months of kiting, fishing, and apparently flying a microlite plane some old guy had lorried up from Albany. The 6am baking sun on our tiny tent greenhouse was relieved by the offshore wind kicking in at 9am. These conditions stayed for the next two days and, with the entire bay to ourselves, we practiced freestyle all day and searched for rays and tiny sharks in the crystal clear water below.

The plan was to travel to Gnarlaoo next, a famous surf and wave-riding spot a few hours south. However, after following Google Maps (rookie error) on the wrong road for an hour and then realizing we couldn’t make the trip with even the spare fuel tank we had, we decided to change our plans and head straight to Shark Bay. The wave forecast at Gnaraloo had looked rubbish anyways (we hoped at least). 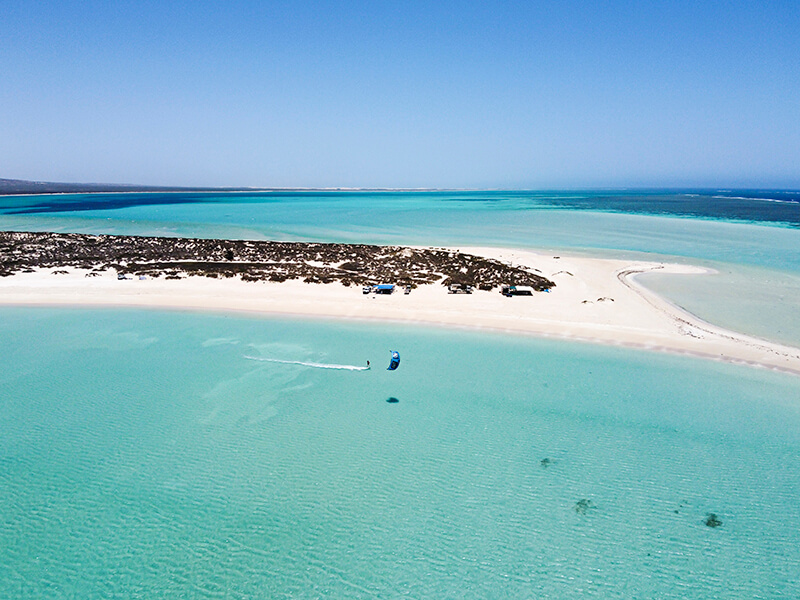 Everyone had told us Shark Bay had some epic kitesurfing so we booked six nights’ stay in a campsite along Denham seafront. We kited at two salty inland lagoons, the very gusty Little Lagoon and then Big Lagoon and, as he does best, Olly found an opportunity to jump up a huge red cliff at Big Lagoon. We also found a decent kitespot along Denham seafront and Olly got a few megaloops in while I shot some video. Although at first we regretted moving on from the north to Shark Bay, there is still some really good exploring to be done along the peninsulas. Damien from Shark Bay Kitesurfing knows all there is to know about secret spots in the area, and reassured us that there is actually no shark danger despite the name of the place, just sea snakes… This was enough to bring one of my sessions to a halt.

Next stop on the trip was Hutt Lagoon, also known as the pink lake. The salt lake is located near the town of Gregory and gets its amazing hue from algae in the water. The wind wasn’t looking too promising for the next few days, so we rushed down to the lagoon to catch the last breath of wind. While the videos of this place look heavenly, the behind the scenes reality of kiting here was very different. When we arrived around midday, we were genuinely so stoked that the lake was actually bright pink just like the photos (you never know). However, it was nearing 40 degrees with the lightest wind, and the only way to get to the lake was by scrambling over some thick bushes for 20 minutes. Launching the foil kite in the spikey shrubs was then the next challenge, but once the Soul kite was up, Olly managed three runs in basically no-wind conditions, doing a crunchy and painful salt-crystal walk-of-shame back upwind while dodging flies between each run. On the upside, the drone shots turned out pretty cool as the lake really was a dead-flat pink soup. Definitely a once in a lifetime ‘get the shot and get out’ kind of kitespot!

On our final drive south before getting back to Perth, we had a one-night stop in Lancellin to muck about with kites on the dunes. We put the Frothed Mobile through its paces, ripping about the sand and almost driving off a cliff before getting some amazing sunset shots sandboarding on the golden sand with the kite. 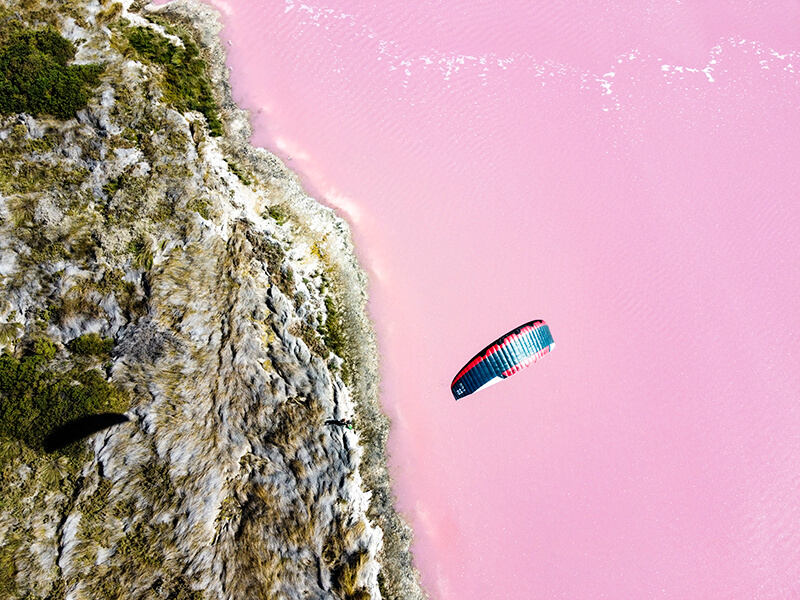 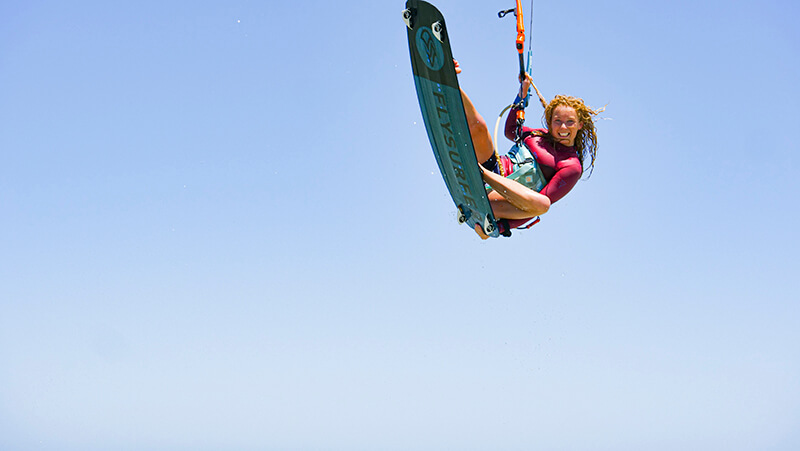 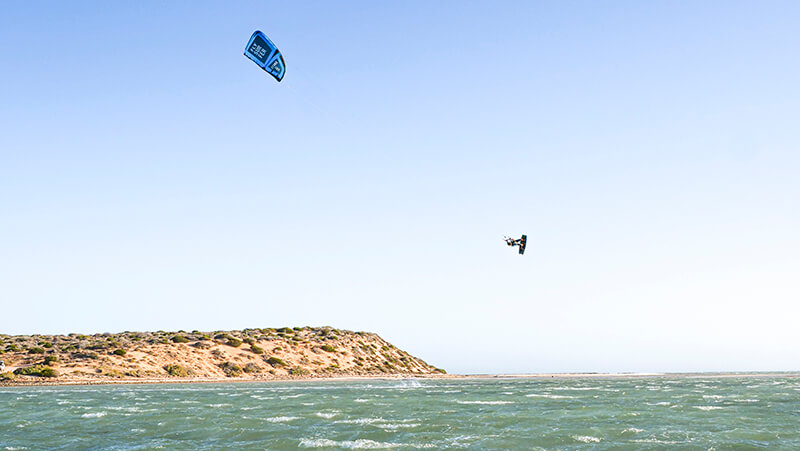 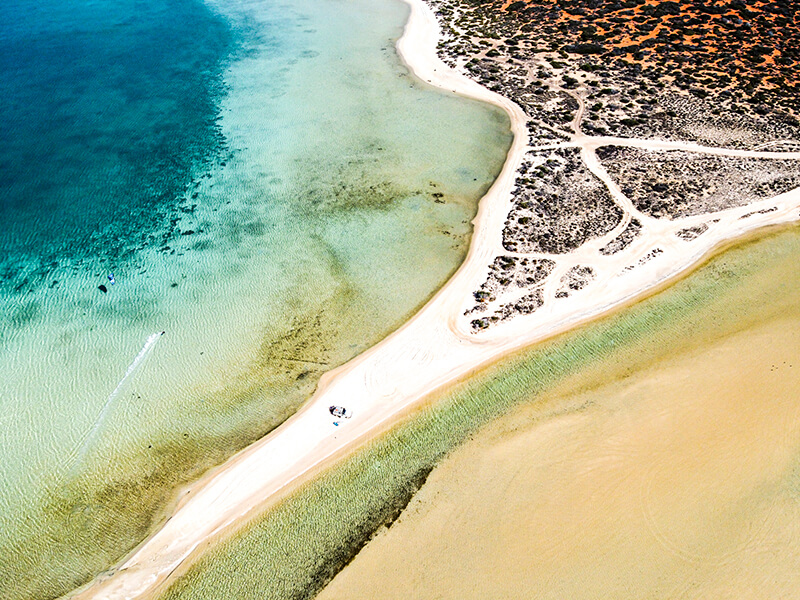 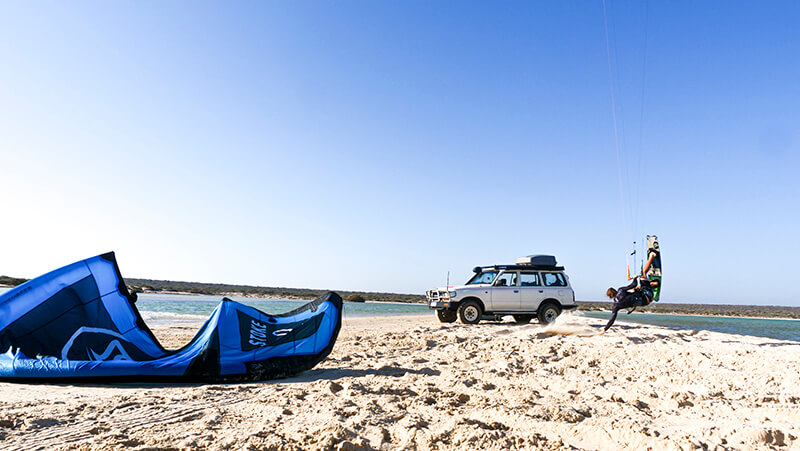 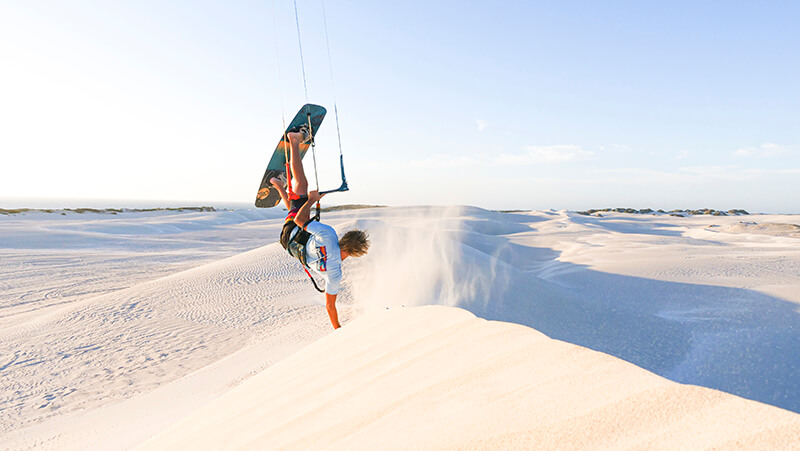 In between editing the video for the first part of the trip and getting prepped for the journey down south, we spent a week in Perth and both competed in the Red Bull Lighthouse to Leighton. The 19 kilometer open ocean kite surfing race from Rottnest Island to Leighton Beach in Freemantle was a definite highlight of the trip for me. Along with 138 other riders, Olly managed to dodge the crazy amounts of weed in the water on his foil to take first place in 21 minutes and 8 seconds. It was the first contest I had ever entered, so I was really stoked to get third in the women’s twintip category.

On the second part of the trip, the landscape changed from desert red to forest green as we headed down for the waves and vineyards of Margaret River. We spent 10 days exploring the beaches along the entire coast and found something for everyone. Big Air in and around Yallingup, wave riding pretty much at every beach down the coast, and flat-water freestyle down at Augusta in the south. This was the first time the conditions weren’t 100% epic, so most of the time we seemed to have a bit too much wind to surf but not really enough to kite. Still, no complaints because when the conditions were good, they were really good, so we’d take that… 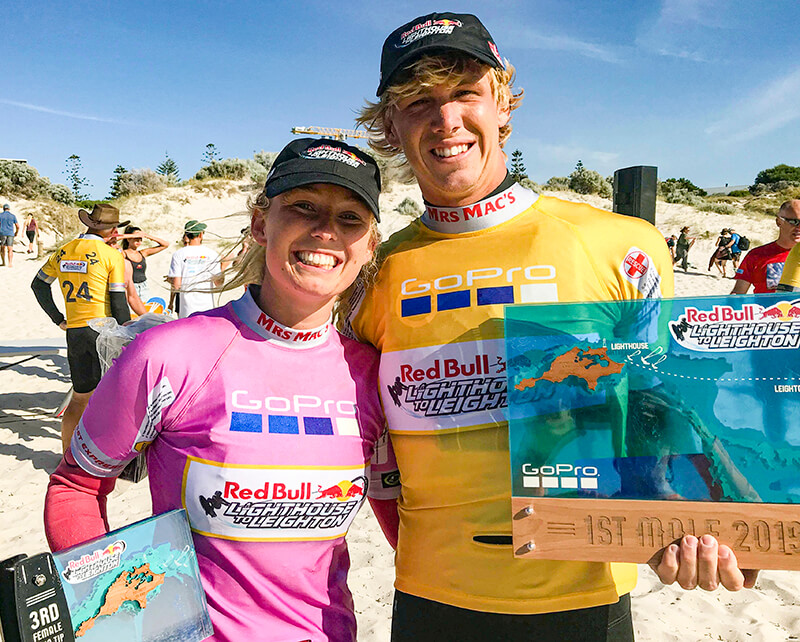 Taking a rare break onto dry land, one of our biggest adrenaline rushes of the trip actually came from scaling a 58-meter Karri Tree named the Gloucester Tree, located in the Gloucester National Park. The tree was originally made relatively easy to climb as a fire lookout spot but is now climbable by tourists. Climbing 58m up the metal pegs, with no real safety net, and navigating a load of other people coming the other way, was definitely one of the sketchiest things I’ve ever done, and I’ve actually never seen Olly so terrified!

Seeking to get back on the adventure, and find kite spots all to ourselves again, we stopped at William Bay National Park, near Denmark, and spent two days kiting between a series of enormous boulders appropriately named Elephant Rocks. I’m pretty sure this isn’t really an official ‘kitespot’, but the novelty of kiting on the flat ocean between giant rocks was another highlight for me, and I’d definitely recommend visiting here if you’re more of an advanced rider/unlikely to ride into a huge granite slab!

The final stop of the two month trip was Esperance. Once you get away from the hundreds of ‘bogan’ kids ripping around the caravan parks on quads, you will find the whitest and squeakiest sand on the planet. Cape Le Grand National Park is just outside of town, and it features miles of sandy beaches where you can stop wherever you like, head out the car door and ride straight onto the water. As we did throughout the trip, we searched maps for spots downwind of low-lying land and found a number of really unique offshore flat-water locations to play around in. When we finally headed back to the town of Esperance, I was squeezing in one final wave riding session when Olly ran up the beach and yelled at me to get off the water. A man had just put up a ‘recent shark sighting at this beach’ sign. Terrifyingly, a shark attack had occurred just a few hours earlier at the same beach. I rushed out of the water, counted my blessings, and thought to myself: it’s definitely time to go home.

The highlight of the trip was definitely the feeling of constant adventure: being able to look on a map for areas that looked potentially good for kitesurfing and having the freedom to rock up, kite all day, and be the only two people there. In fact, I doubt some of the places we visited have actually ever been ridden before. The scenery and adventure can also be yours for the taking; you just have to be willing to brave the heat, flies, sharks, and scarcity of fuel stations and water supply. I guess that’s the price of an empty kite spot these days – but definitely a price worth paying… ■ 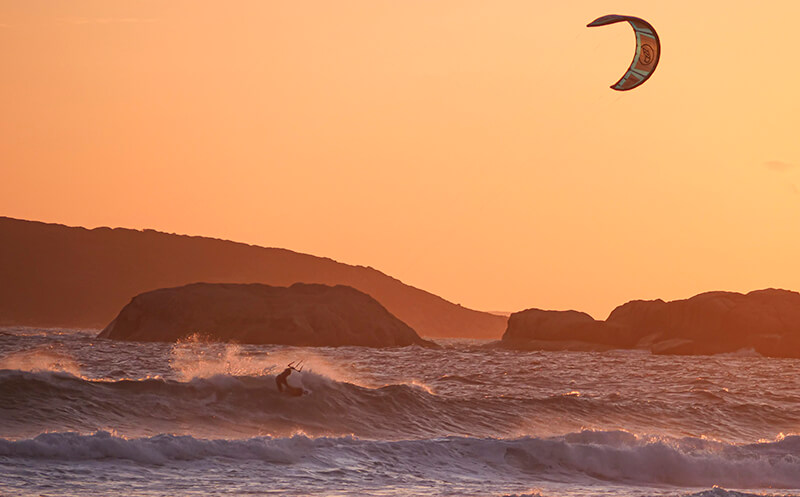