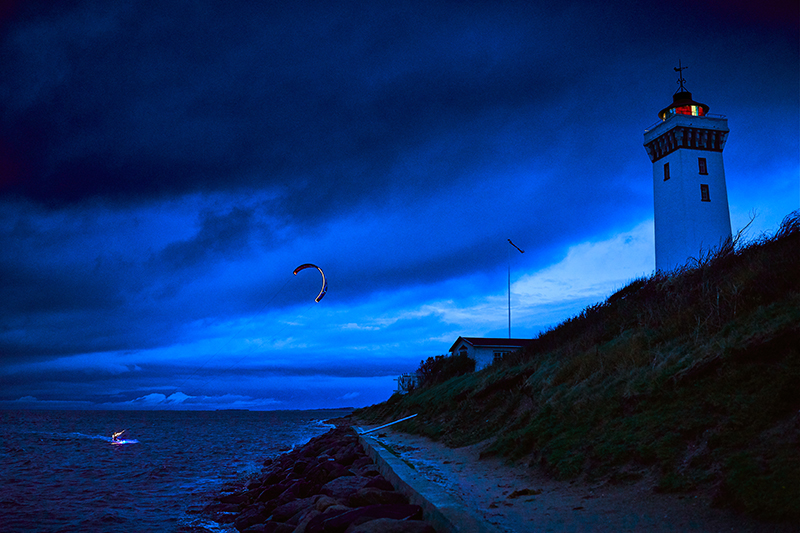 Therese Taabbel redefines the concept of ‘riding lit’… Here she takes us through the project and the challenges that come with attaching a lot of extra weight to your kite – as it turns out, it does make quite a big difference to performance…

We called this project Light Waves and it was made in collaboration with Red Bull and Audi. Our goal was to create a different look in the night sky. We attached 4000 colorful LED lights to my kite and board to light up the sky. As well as this, we wanted to show the power of the headlights of the Audi Q series.

The project started back in Copenhagen and the idea was to create a different look that would light up the night sky with beautiful colors and a very different look. Together with Audi’s Q series, I would be able to kite in the dark with pink, purple and blue colors while Red Bull photographer Esben Zøllner Olesen would capture it from the shore. 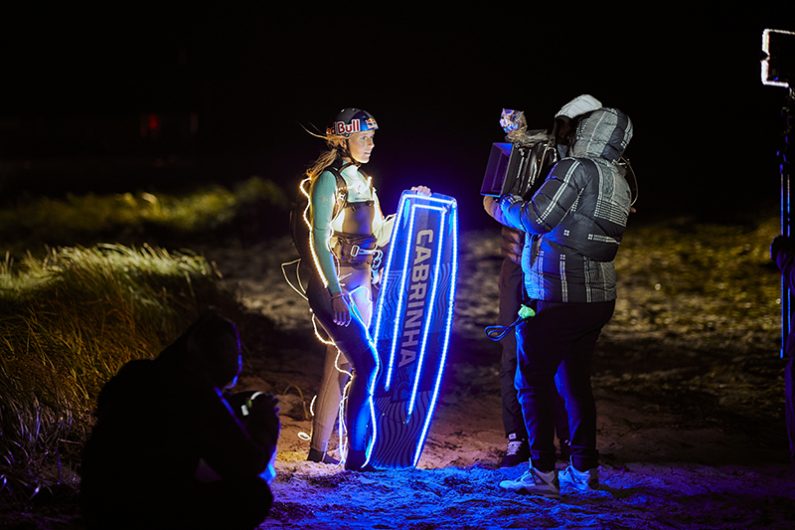 The interesting part started way before the action on the water. We ordered the waterproof LED tape online and we met up to figure out how to attach the LED tape to my kite, make it waterproof and to transform my equipment into something unique. Our toolbox consisted of wire, a soldering iron, joint sealant, strips and duct tape.

“The combination of LED tape and the wires pulling on the steering lines was dragging the kite down.” 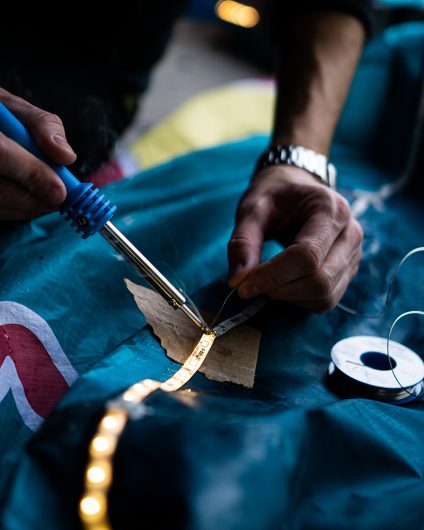 After two days of working on the equipment, we had the set up ready. 4000 LED-lights had been glued to my kite, board and wetsuit. It was ready to light up the waves in the dark. In the end, the set up came out more complicated than I had expected. On my bar there were two wires attached with strips on each steering line. Those wires were connected with my wetsuit, that was connected to my board, that in the end was connected to a battery which was placed in a waterproof box in a backpack I was wearing! That meant everything was connected. So, setting up the kite on the beach was almost the hardest part and took more than an hour. Everything was connected and it could (and did) get messy at any time!

I was both nervous and excited to launch the kite. The wind was light, but I was surrounded by four videographers, two photographers and a support team of four from the Red Bull office who were all ready to capture the moment we were preparing for. I got the 12m LED kite in the air with around 12-14 knots of wind, and it was much heavier than expected and could barely stay in the sky. The combination of LED tape and the wires pulling on the steering lines was dragging the kite down. We had to abort the mission and postpone for another day. Wiser and more prepared for next time, I knew I was going to need at least 16-18 knots to get the beast riding. So one month later after that first failed attempt, and we still hadn’t got the shots we wanted… 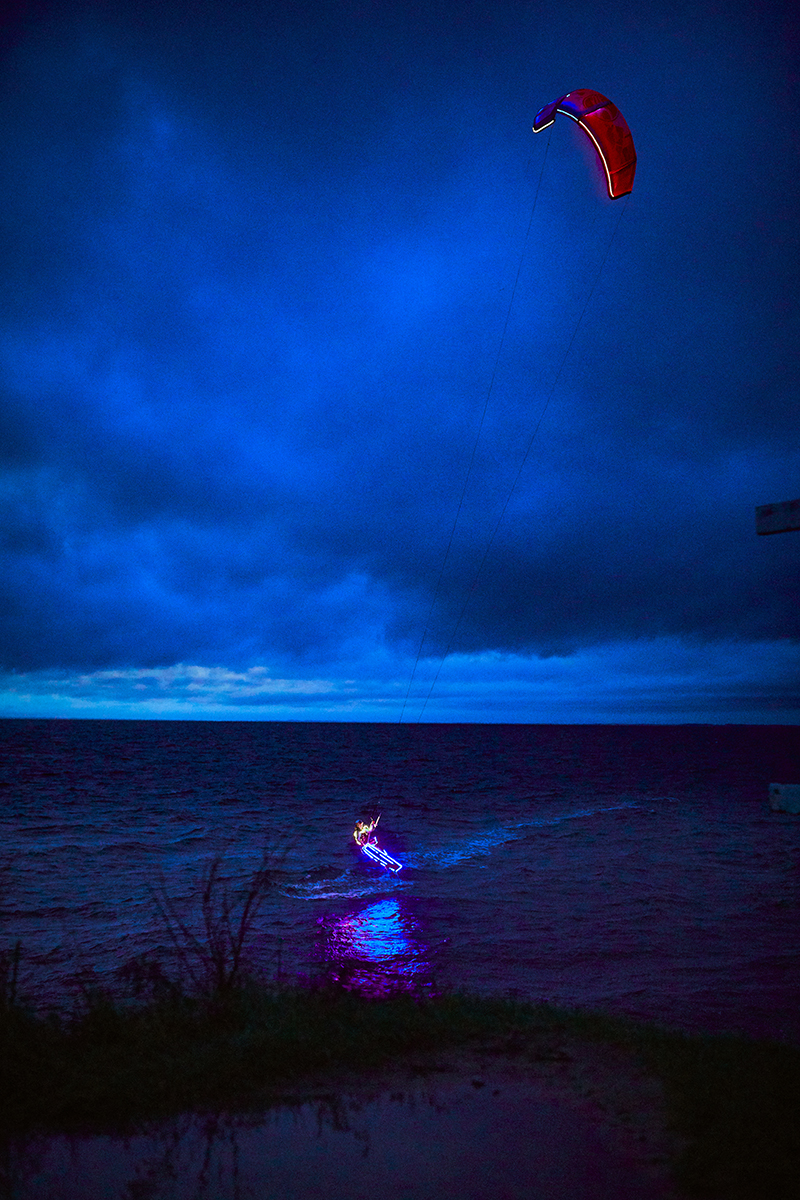 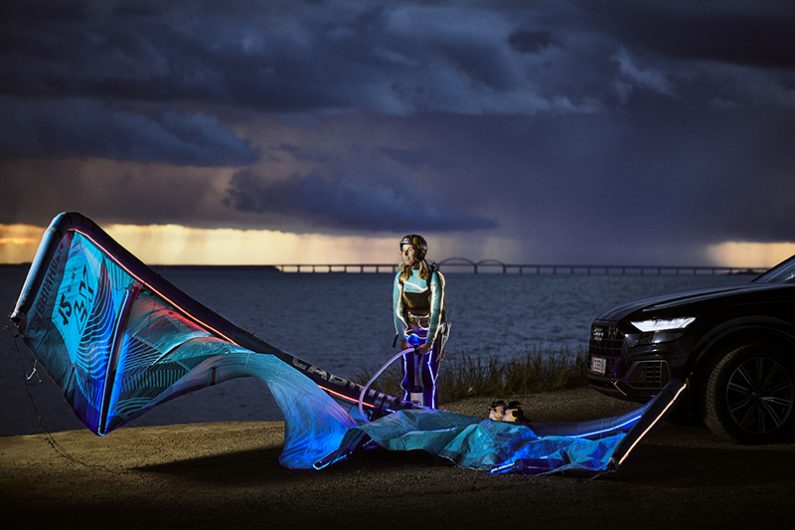 It was rainy, and autumn had arrived in Denmark. But the wind forecast was looking promising and it was our last chance to get the shots before the deadline with Audi and me leaving for my next trip. We took the chance and drove to a spot two and a half hours away from Copenhagen as that’s where there would be the best possibility for wind. But we arrived and there was no wind and the rain was pouring down. We prepared everything and crossed our fingers that the rain would stop and the wind would start blowing. But also, that the clouds would open up and the sun would shine through. As this was essential to get the look we were aiming for, with a clear sky and clouds to make an interesting background. We had checked multiple forecasts, and all promised that it would be a windy and clear sky.

“Within 10 minutes, the rain  stopped, the grey skies parted and the wind kicked in.” 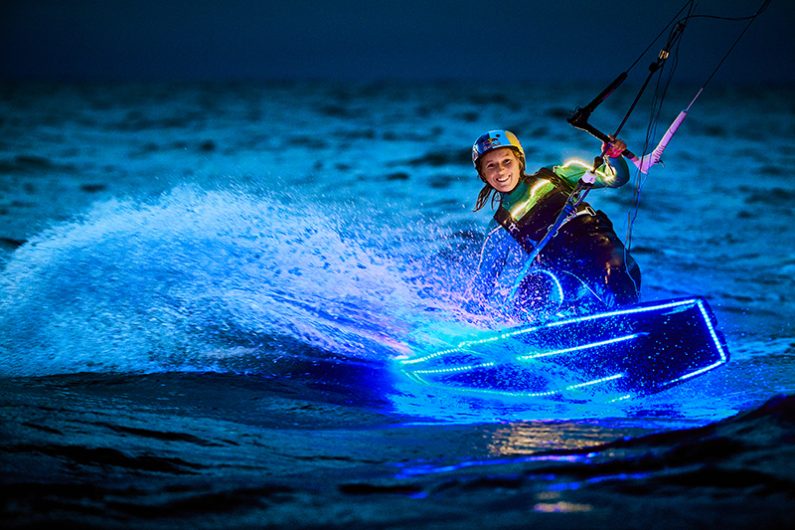 And true enough, within 10 minutes, the rain stopped and the grey skies parted. The wind had kicked in, turned in the right direction, the clouds had passed, and the sunset was showing. The perfect conditions to capture the photos we wanted.

It was all about the timing, as we knew we were only going to have one hour before it would be too dark. The kite was prepared, and I jumped into my wetsuit. The wind was strong, but the weight of the kite was heavy, and it was not possible to boost the kite and get the airtime I was hoping for, even though I was overpowered. In the end it was okay though, Esben captured some amazing photos and played with the scenery around the spot. He ended up shooting the last pictures from a lighthouse that was at the location.

The project ended up being way more complicated than we first thought, and the set up with the wires connected to everything made it a mission to rig up the equipment. But when I was finally on the water, and the beautiful colors of the kite were shining – I was SO stoked. By the end of the shoot, it was like kiting with your eyes closed, so I was trusting my intuition of the waves and the wind. The vibe was high, and I was so happy with the pictures that we got out of the project.

This feature originally appeared in TheKiteMag #35. To subscribe, head here.