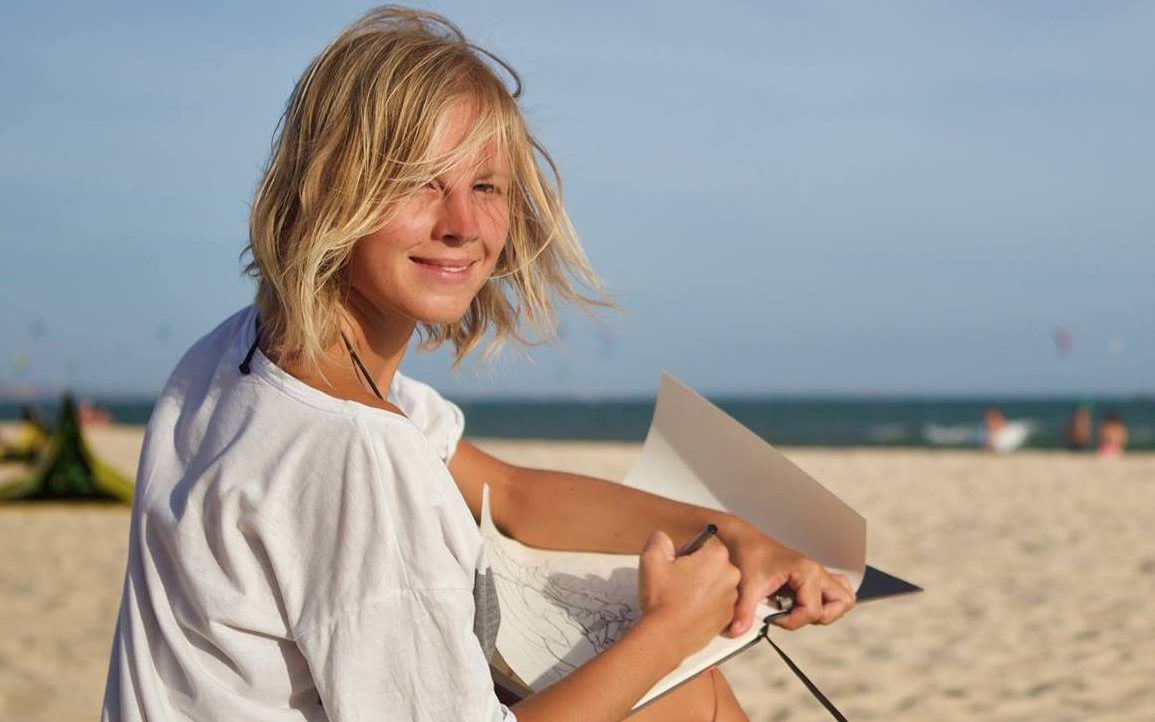 I'm an architect and interior designer and have been fond of painting from a very early age. I love to travel and to meet new people and this has always given me the material for everything I create.

When I learned kiteboarding, the more I practiced it, the more I fell in love with the sport and with the ocean – its power and its beauty.

I was on the Cape Verdian island of Sal when I first really felt the connection between me and the ocean during kiteboarding – the strong feeling of being in-the-moment in the turquoise water, with the speed of the board and with the wind blowing. There I saw Mitu Monteiro, Matchu Lopes and some other guys who had this complete “connection” while riding the waves. Then I met photographer Maria Enfondo, who gave me the idea to combine two of my passions: ocean riding and painting. 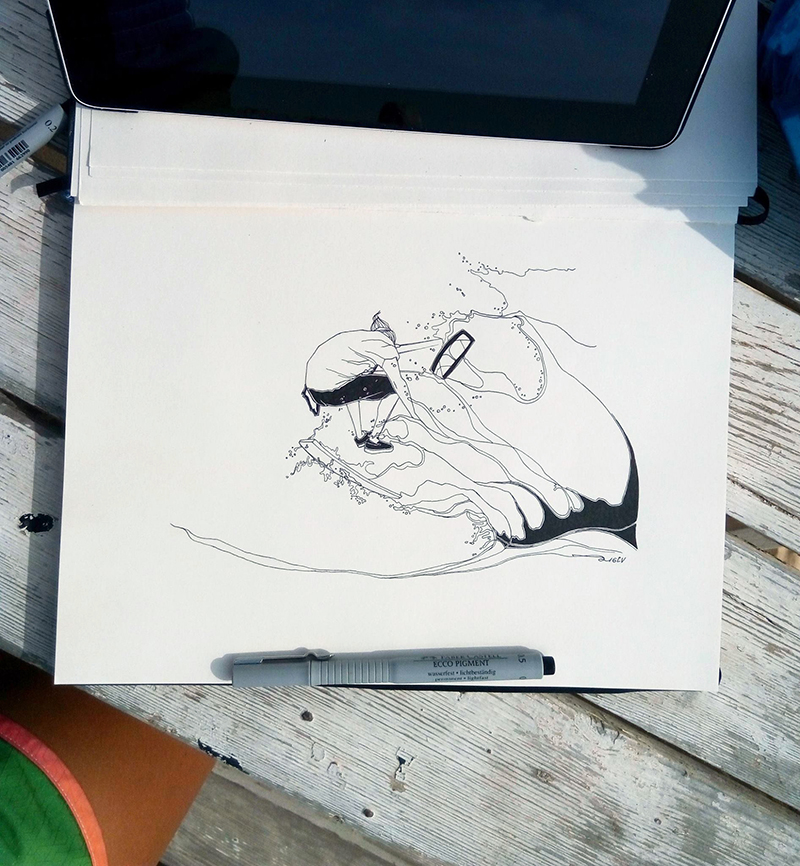 The Process of Creation

It starts with finding a shot that captures the moment of a trick, a beautiful wave, or just a good combination of the wave and rider. It could be my shot, or could be made by any photographer. But it needs to be a photo so that I can make detailed and precise graphics, which is impossible to do ‘live’.

My first drafts were taken from the pictures of Maria Enfondo, who was also on Cabo Verde. So I was doubly inspired as I was listening and riding the same ocean that was in her shots.

I use paper, pencil for the initial draft, and then liners of different thickness for the final picture. When I need to make a colorful drawing, acrylics are my favorite for their brightness and saturation. Then, when the picture is made, I scan it and do vector graphics from it if needed, or just treat it a little bit in Photoshop. 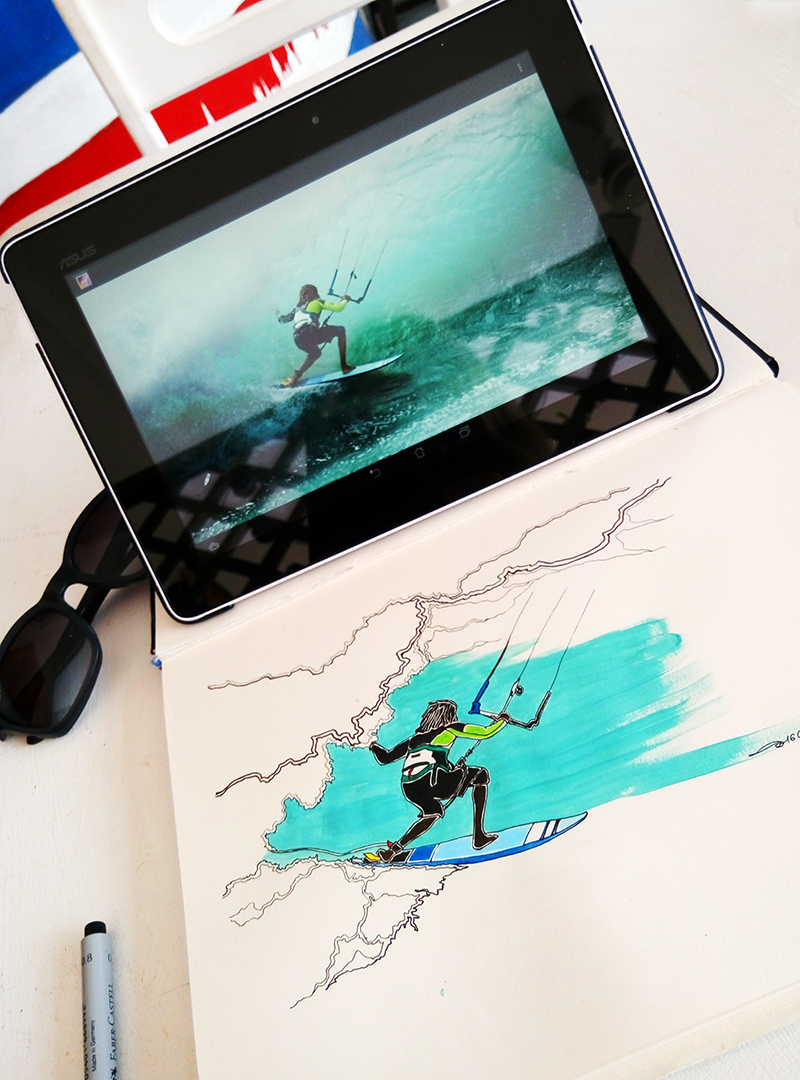 It's a special feeling I get when I see a photo and can visualize how it will become a graphic. I feel the power of the moment which has stopped in a photo, then I see what I want to focus on, which details could be used to best transfer the power of nature in correlation with the rider’s movement, and how to add the color if needed. And then the process starts, and I am fully inside it. I find it is always best to draw between kitesurfing sessions – then the feeling of the moment and the feeling of what you are doing is at its strongest.

From Maria Enfondo's shot. It seems like the Cape Verdian riders know more than others about the ocean's power and how to deal with it. The color of the Atlantic ocean is essential as well… 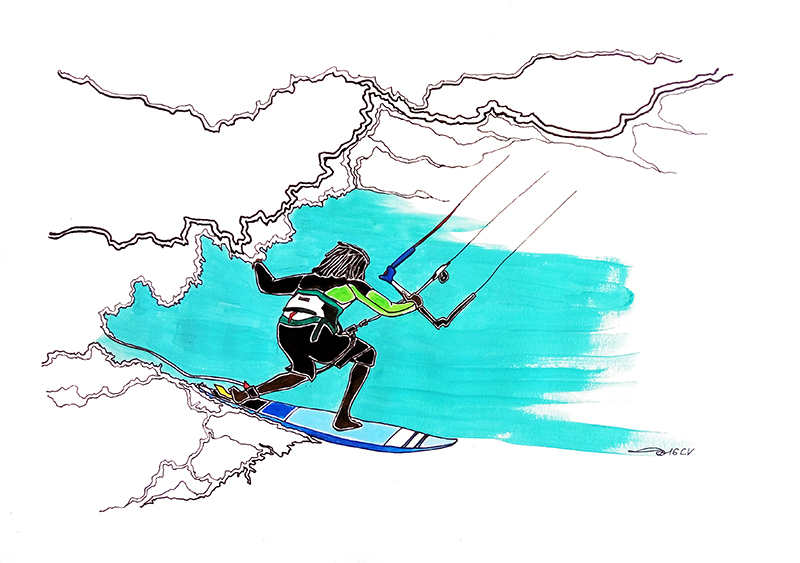 This is from a picture of Gabriele Rumbolo. As always the photography out of Cabo Verde has a special meaning for me, and the huge powerful waves in Ponta Preta inspire regardless of whether there are any kitesurfers or not… 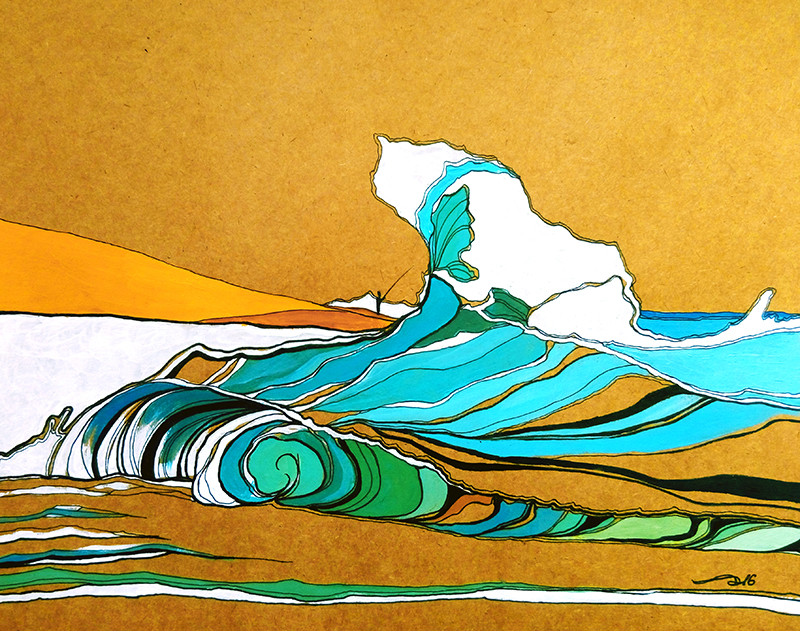 This one was made thanks to meeting Vasco Santos – a Portuguese rider. The photo was already very graphical with the jump and colors, so as soon as I saw it I immediately understood how it should be painted. 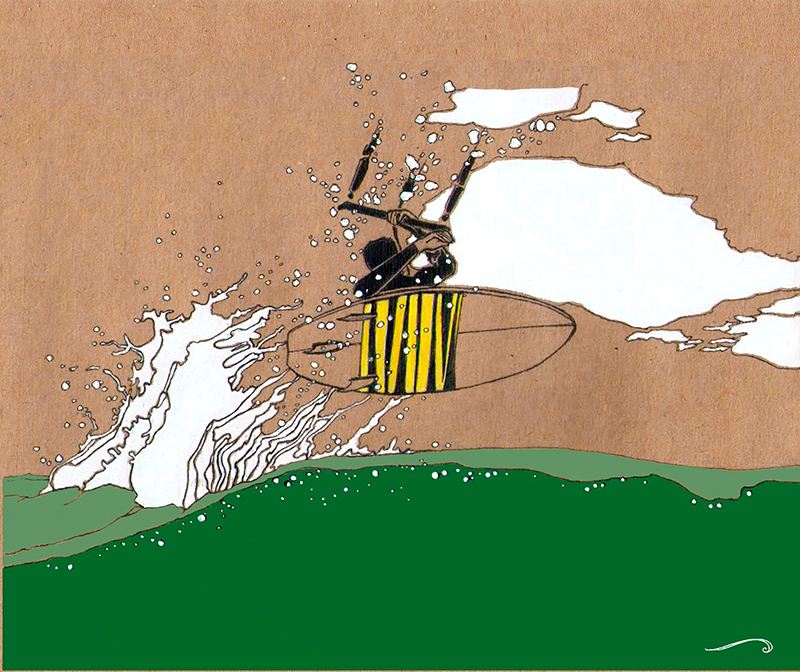 The original photo was given to me by Maria Enfondo (I don't remember whether it's hers or somebody else’s, but for sure she was there, in the boat). I liked the bright colors of the Egyptian summer together with a nice combination of the yacht scene, which served as a frame for the picture, and the rider in the background. This one was very close to the original photo as I was looking forward to giving it as much detail as possible to make it as realistic as I could. 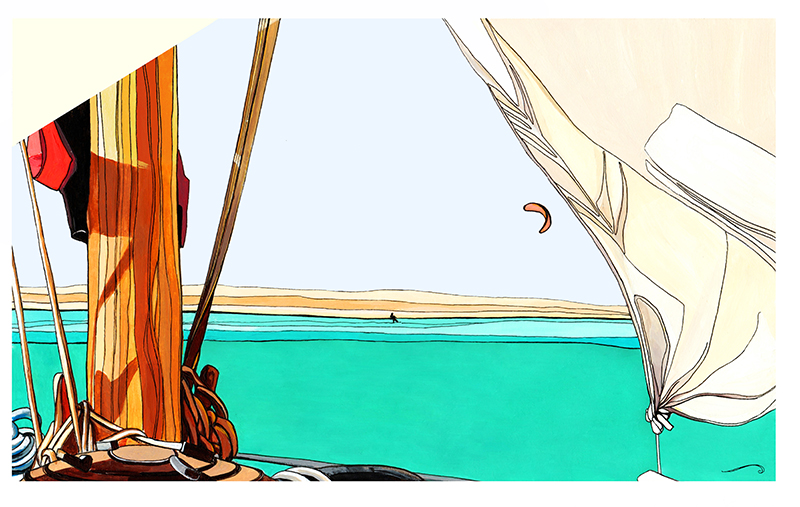 I did several drafts of this with the same shot. This one is the most graphical, showing the power of a Mitu Monteiro jump. 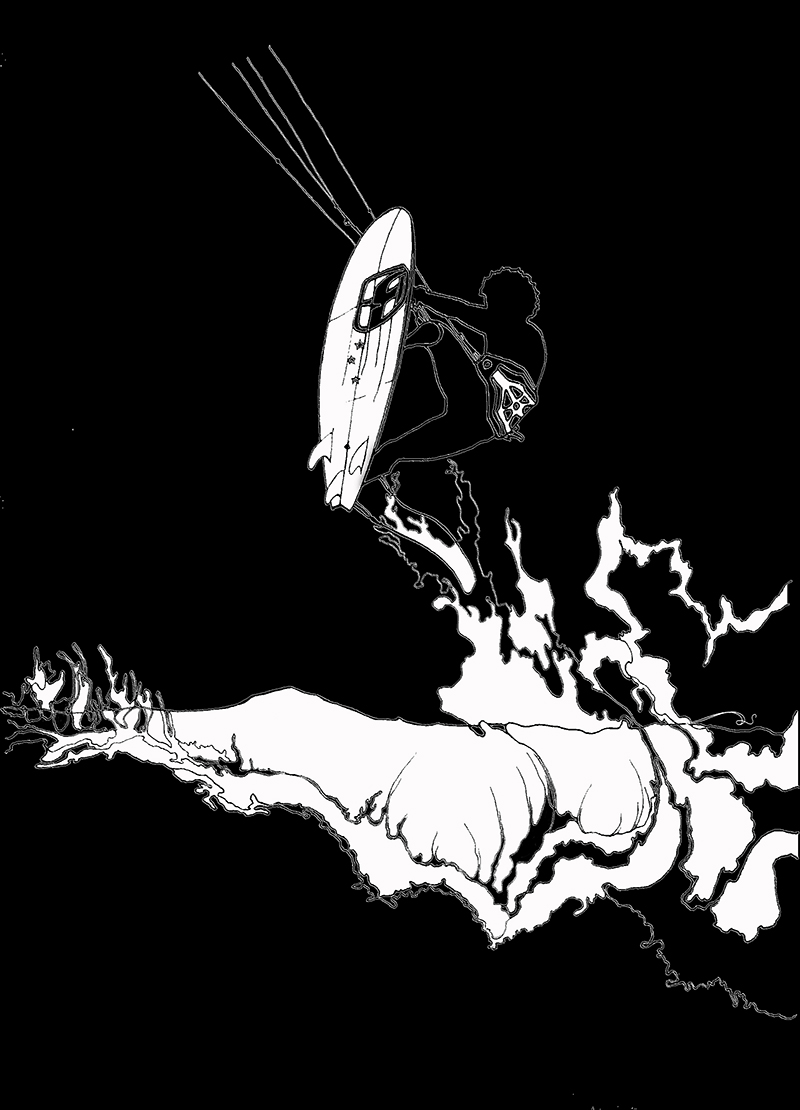 Besides the super energy of the shot, I liked the fun of the idea itself: to jump in the water in sneakers! 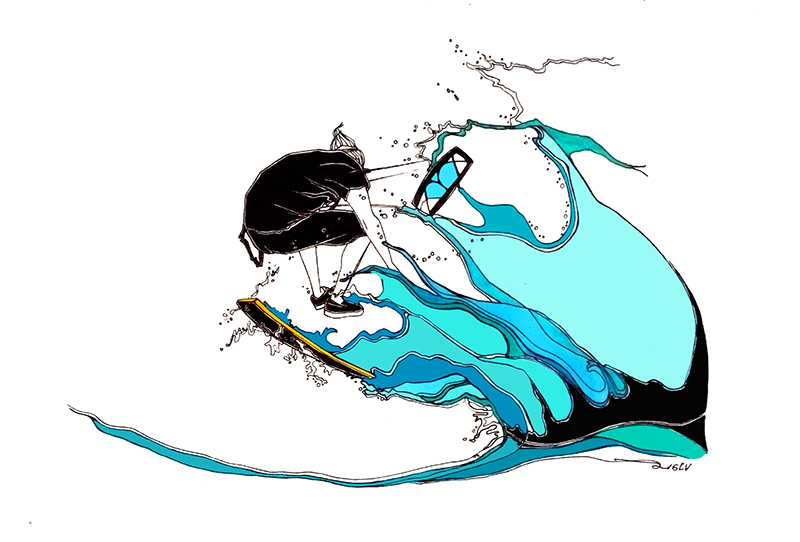