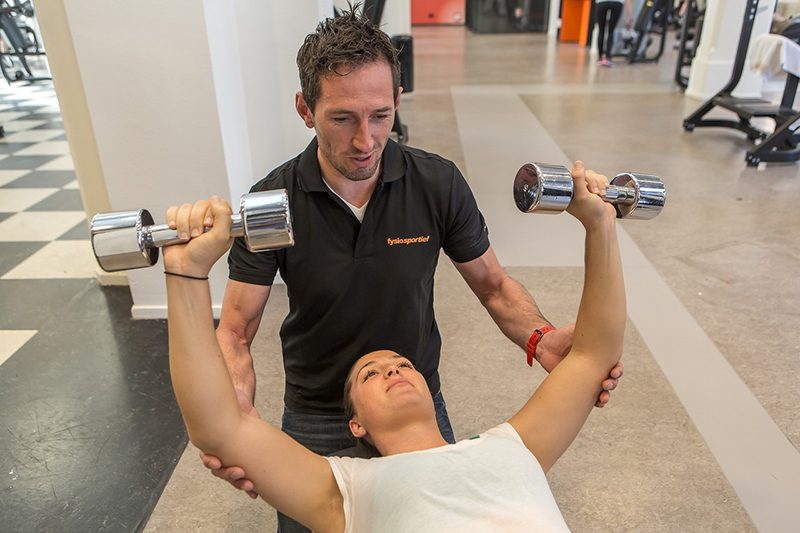 EDITOR’S NOTE: This article was recently published in TheKiteMag #18. Due to a misunderstanding, the article author was misrepresented. The actual author was Koen Marée, with input from Julia Castro. Our sincere apologies to Koen for the mistake.

The wrong landing and straight away you feel the pain bursting through your body. While you’re being brought to land, you think about your broken dreams. It’s not an unusual story and many professional riders go through the experience – often more than once – over the course of their career. However, thanks to the KiteMedical team, based in The Netherlands, there are many riders who have been able to recover and rehabilitate quickly and still compete at the highest level. Youri Zoon and Ruben Lenten for example…

We’re in Groningen, a city in the northern part of The Netherlands. It is also known as ‘the city that never sleeps’ due to the 40,000 student residents and the fact that bars closing at 9am is not uncommon. In daylight, the vibrant nightlife is replaced by an impressive number of bicycles. Official statistics say there are more bikes than people within the city. With no sea or lakes nearby, no one would point Groningen out as an important kitesurfing venue (the nearest spot is around an hour away). However, for the injured kiteboarder or wakeboarder it seems the place to be. Sports trauma surgeon Roeland den Boer and sports physiotherapist Leon Meijer, both fanatic kiteboarders, know what’s needed to get back on track, and the duo have ensured the rehabilitation of many kitesurfing professionals.

Back to the summer of 2013, during the PKRA World Tour event in St. Peter Ording, Germany, Youri Zoon suffered a dislocated shoulder. Before the incident occurred, he had already felt some small pains in his left shoulder. However, after some warm up exercises on the beach the two time World Champion decided to take the risk. Your explained that, “During the heat the pain got worse, so I stopped, then on the beach they found out about the injury and I was sent to the hospital where the doctors relocated my shoulder again.” Immediately Youri knew he had a long way in front of him until full recovery. Normally it would take from six to nine months. 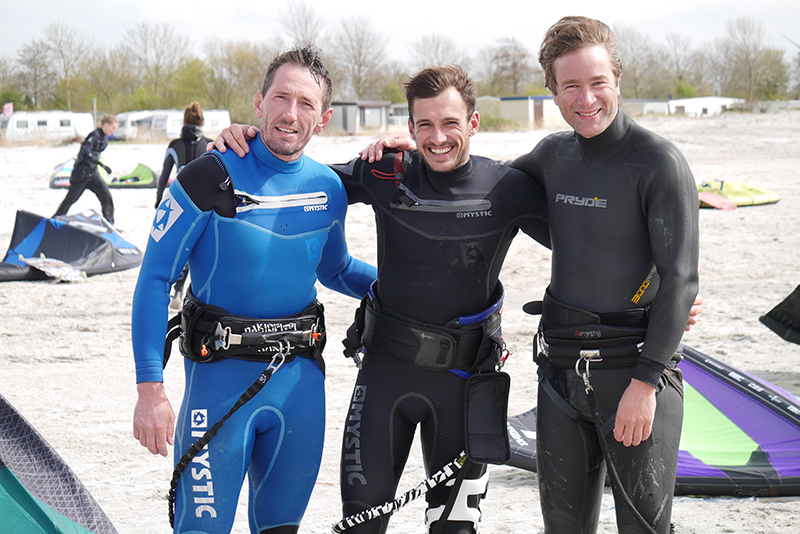 The first thing Youri did on returning to The Netherlands was to visit his local hospital. There they told him there was a long waiting list for having an MRI. It was then that a visit to KiteMedical was suggested, and Den Boer invited him to come over to Groningen. Together with Leon they covered everything in just one day. The MRI showed a clear crack in the labrum and a rehabilitation program was devised by Leon. Although, living in the Dutch province of Zeeland, KiteMedical was 300 kilometers from Groningen, Youri decided to proceed with the team. “It went very smoothly. The first eight weeks after the surgery by Roeland I traveled once a week to Groningen, just for one hour of practice. Three hours back and forth. In the first phase we worked on the mobility of my shoulder. I remember Leon gave me a 2.5 kilo dumbbell and I laughed, but at that time it was heavy enough.

“Slowly but surely the power came back. Then, besides the training in Groningen, I did my work-outs in a gym close to home. It was easy for me to trust in what Leon told me. One year later, I ended in the top five of the World Tour and won the last tour stop. That was amazing after such a setback.”

The travel distances of Zoon are nothing compared to the journey Julia Castro made to get her treatment in Groningen. Julia suffered a shoulder injury during a training session in South Africa, and there they said she needed surgery. Julia flew back to Barcelona and went to the hospital, where they saw nothing on the MRI. Then another doctor again said she needed surgery as soon as possible if she wanted to continue with her professional career. It was kind of frustrating, not knowing what the best choice would be. Then Julia heard about KiteMedical and contacted them. They explained her options in a clear way. For the first time a doctor or physiotherapist recognized her as a professional and she wasn’t sent away with a lame training schedule or with the advice to just stop doing sports. Roeland and Leon took her through the whole rehabilitation. In fact, even if she is in competition at the other side of the world, Julia can still ask them questions via Skype or WhatsApp. 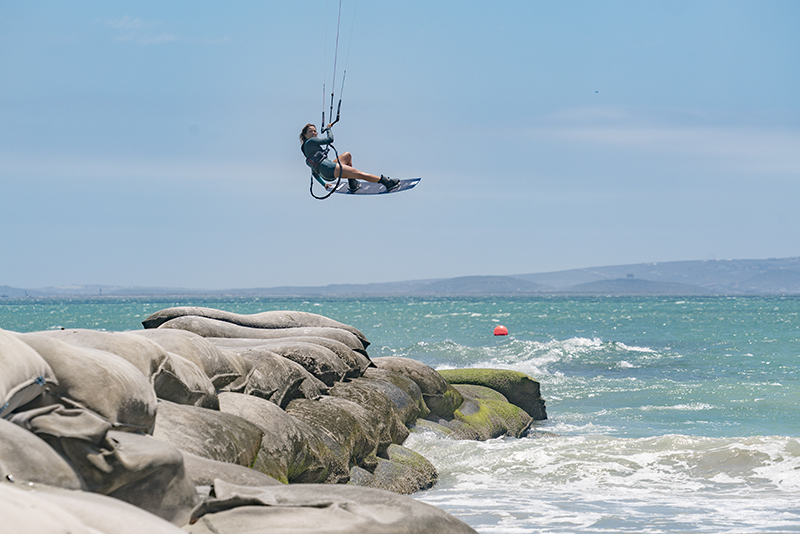 Leon smiles when he hears of the kind words from his former patients. “I’ll always answer when they’ve questions about their physical condition. I see it as one of the phases in the rehabilitation trajectory. First, I’m a patron, then I become a daily therapist. In the third phase of the rehabilitation, I’m a motivator. A sports therapist. And then, when the kitesurfer is fully recovered, I’m a physical trainer.”

So why kitesurfing as a specialism? “My knowledge of kitesurfing helps a lot when it comes to rehabilitating professionals,” explains Meijer. “If I would help a swimmer, I wouldn’t know exactly what to do because I’m not into the sport. But kitesurfers and wakeboarders are easy for me to trigger, to understand. In the communication, the kitesurfer and I speak the same language.” 43 year old Leon began kitesurfing at a later age. Seven years ago, he saw a magazine and fell in love with the sport. “I really like to catch nice waves and big air and, as a former marine, I’m a thrill seeker. That’s why I like helping professional sportsmen and women with their rehabilitation. They know the drill; the discipline that’s needed.”

The sport is slowly professionalizing itself, reflects Leon. “In the past kiteboarders just did something, without exactly knowing what. Now you see the focus changing. Both professionals and amateurs try to do more in terms of injury prevention. It’s necessary, especially as kitesurfing becomes more and more radical.”

On a national scale, KiteMedical organizes events to inform kiters and wakeboarders about injury prevention. After the theoretical part, the participants are taught fifteen to twenty exercises to help to avoid new injuries. “What can be dangerous is that after a long winter break, everyone instantly gets to the water and they want to do the things they were used to doing back in the summer. But if they didn’t work on their body in the off season then it is easy to get injured. That’s why these exercises are so important.”

In the last phase of the rehabilitation they went kitesurfing with Youri. “He inspected the way I was holding my kite, but it was also lots of fun,” recalls Youri. “Now I want to help younger kiteboarders with injury prevention and advice myself.’’ Again, Leon smiles: “This is what is cool about kiteboarders. It goes the same for Youri as it does for Julia; he was in Brazil and called me to ask some questions. They know how to find you. And I’m always there to help them.” 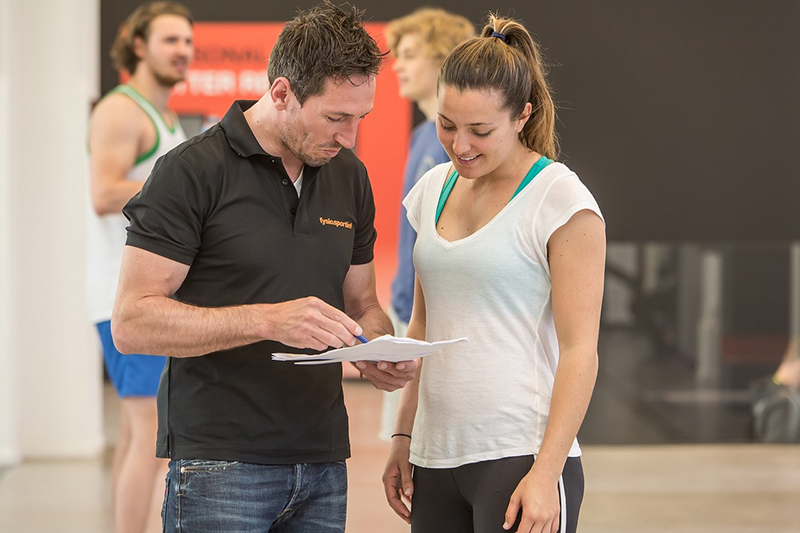 It might take you a little bit of discipline and effort, but there are some exercises you can do easily without the need of a gym. Leon gives five do-it-yourself examples: 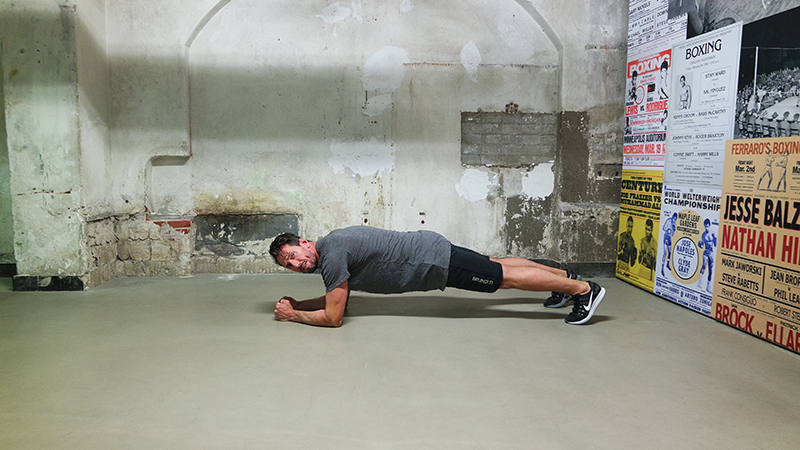 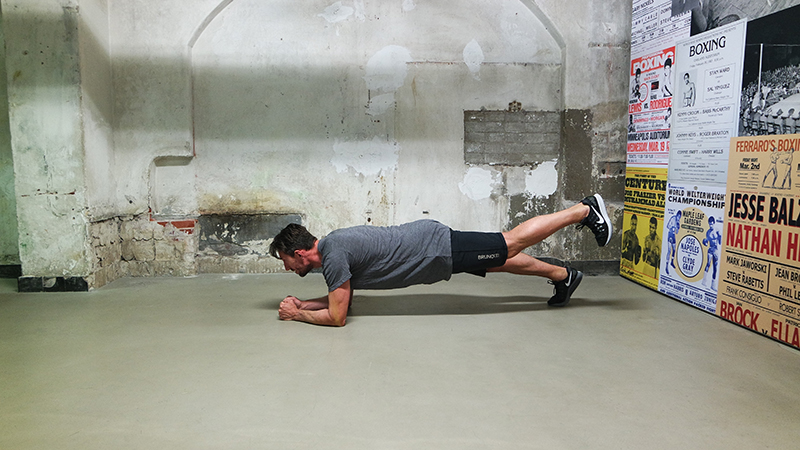 The prone bridge is also known as the “plank” or “hover” and will improve the muscular endurance of the abdominals. It’s also a big motor in core-stability. All the movements of kiteboarding are going through the core muscle system so it is important to train it. Start in the push up position with your feet 30cm apart and your hands shoulder width apart. Push up to the prone bridge position so from now on you are ‘resting’ on your hands and toes. Make absolutely sure that you have a straight line from the shoulders through the hips to the knees. From now on just lift your left foot for two seconds then switch it over with the right.

Intensity: 4 sets of 30 seconds with 1 minute of rest in between. 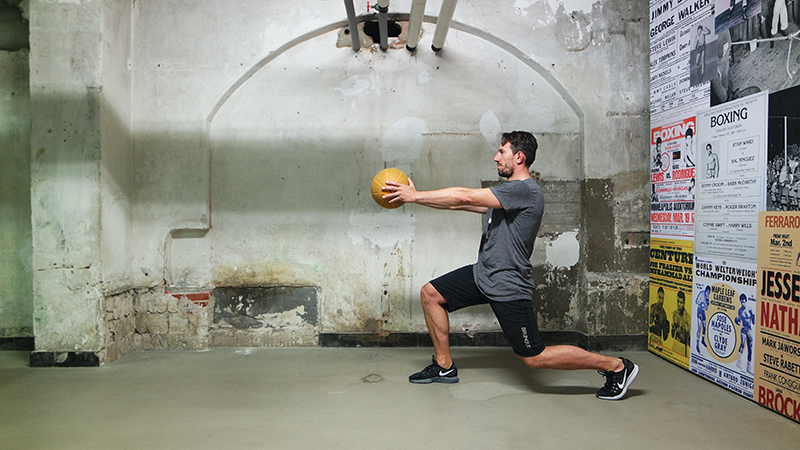 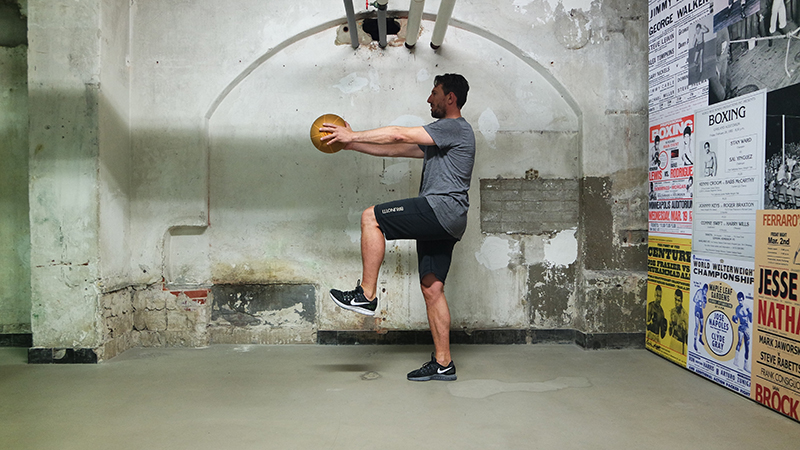 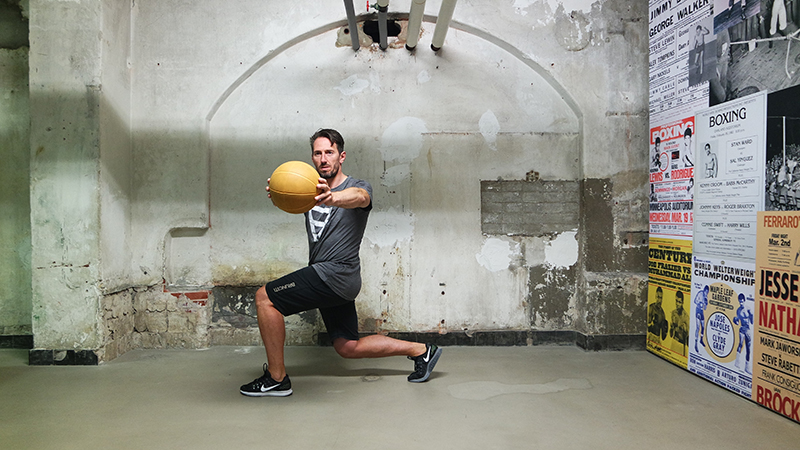 Step forward with your right leg. Land on your right heel, then to the ball of the foot. Lower your body by flexing your knee and the hip of right leg until knee of rear leg is almost in contact with the floor. Stand on your forward leg with the assistance of the rear leg. Lunge forward with the opposite leg. Repeat by alternating the lunge with opposite legs. Keep your torso upright during the exercise. Your lead knee should point in the same direction as your foot throughout the lunge. You can increase the difficulty level by carrying more weight. 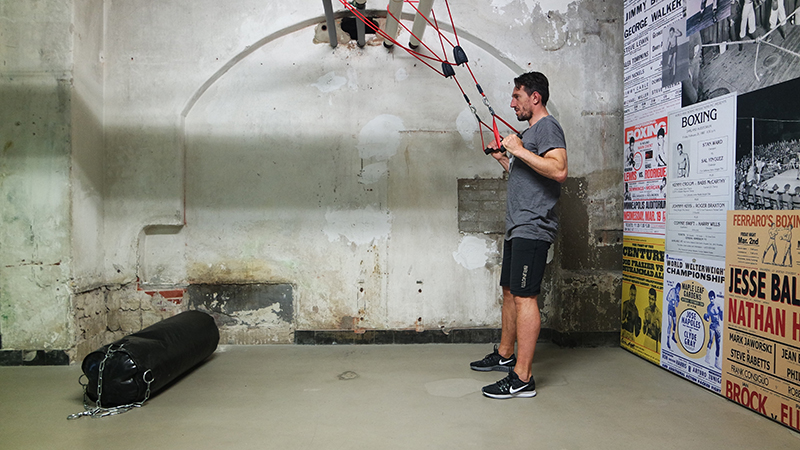 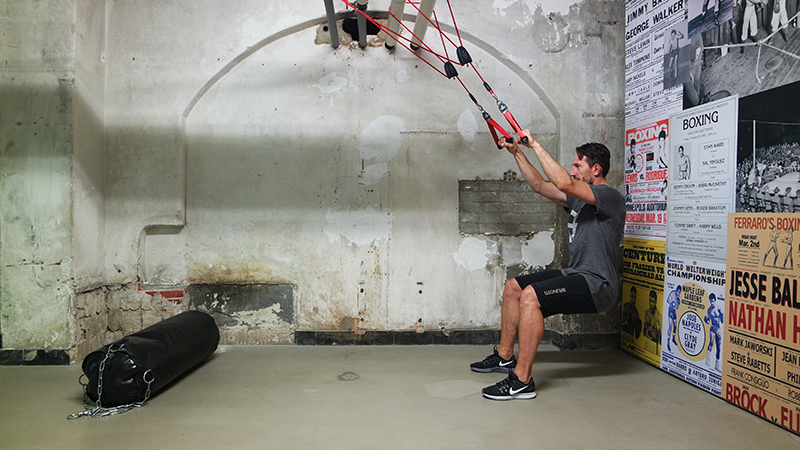 Grasp both handles and lean back to about a 45-degree angle. From here, squat, keeping your back as straight as possible. Once the glutes are just above the ground, drive the heels down and return to the start position. 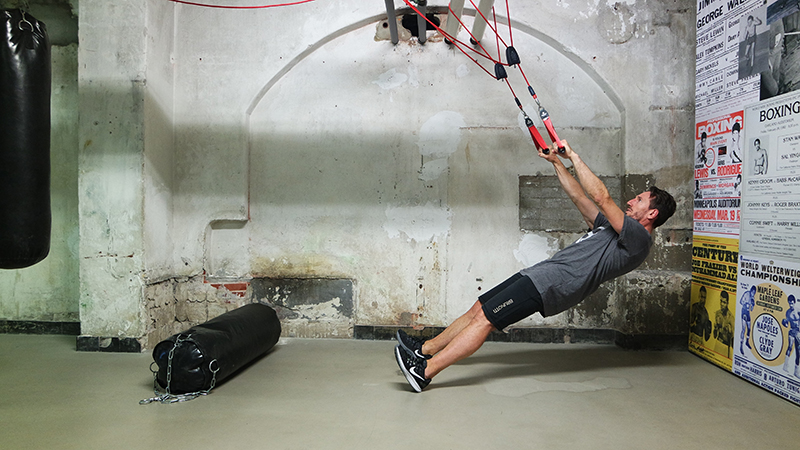 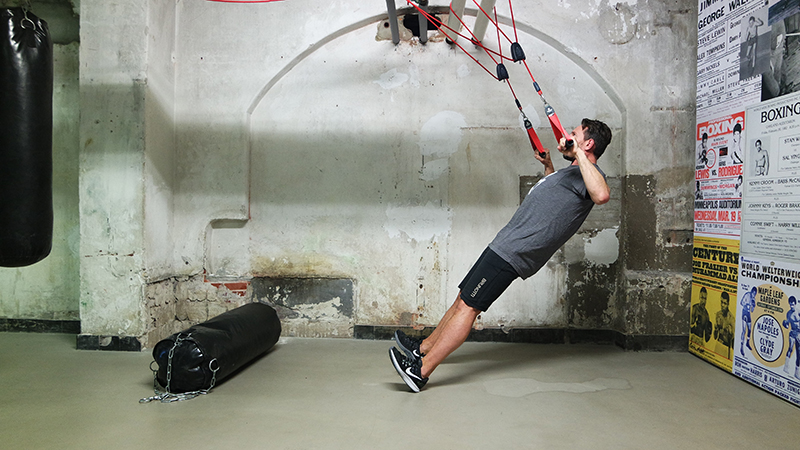 The TRX is a great piece of equipment to have in your “toolbox.”  Its lightweight, packable design makes it great for travel and in-home workouts. Grasp both TRX handles and lean back to about a 45-degree angle. With the palms facing downward and the arms extended, pull yourself up to the handles. It is important is that your body should be straight so keep the core tight and retract your shoulder blades. Now slowly rotate your hands until the palms are facing each other. Return slowly to the start position and stay in control. 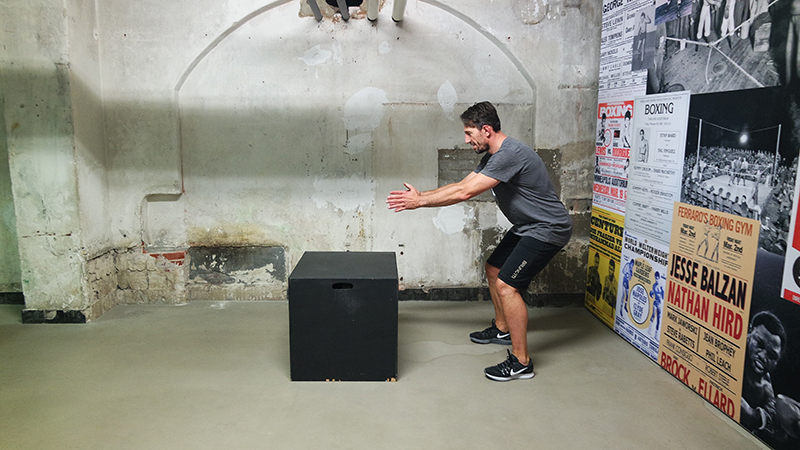 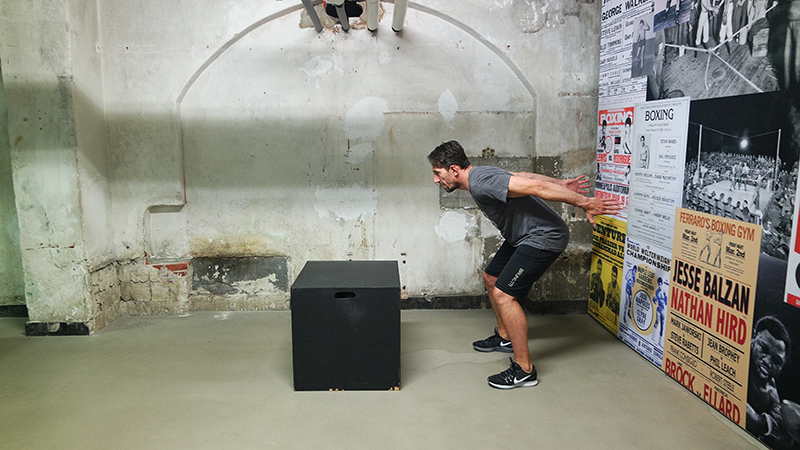 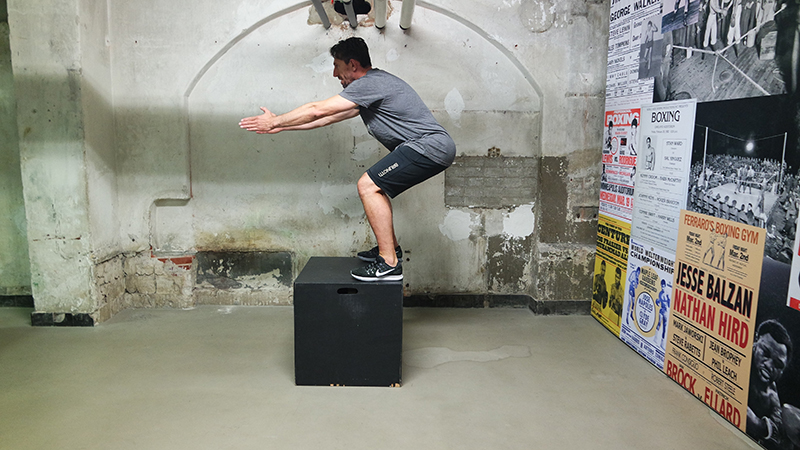 Box jumps are great for building athleticism and muscle and of course we need that in kiteboarding. Don’t start with an amazing high box but just one with a height of around 40 centimeters. Stand with your feet a shoulder width apart. This is your starting position. Perform a short, not too deep, squat in preparation for jumping while swinging your arms behind you. From now on just rebound out of this position to jump as high as possible while you swing your arms forward and up. Land on the box with the knees bent, absorbing the impact through the legs so that you have a really soft landing in the half squat position.

What would you do if you had to balance the heaven of kiting perfect uncrowded beaches, with the hell of having to quarantine for 14 days?