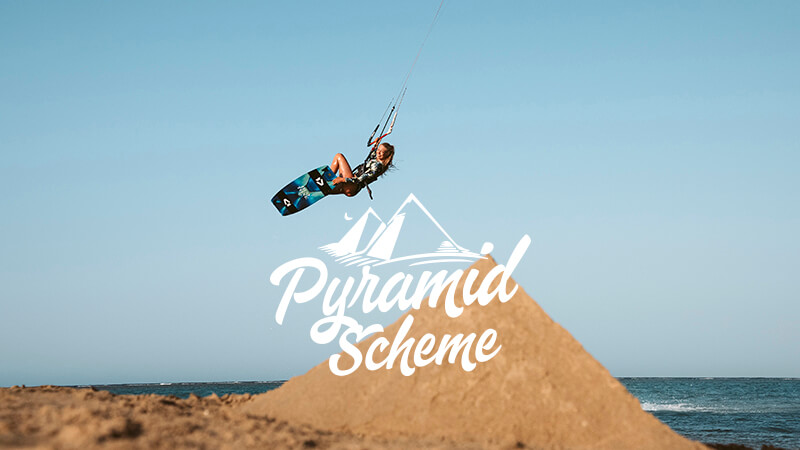 It felt like an eternity that I had been at home over the UK winter, battling on the inside to keep my positivity consistent. People see the dreamy pictures and videos and think you have it so easy as an athlete, as if it is somehow not a ‘real job’. The reality is it is not a holiday – so much dedication and time is put into training to be the best you can be. The pictures and videos you see have had a lot of planning go into them and it’s not always smooth sailing. The logistics of planning a shoot can be difficult enough, without the added headache of Covid restrictions. But, nothing ventured, nothing gained. 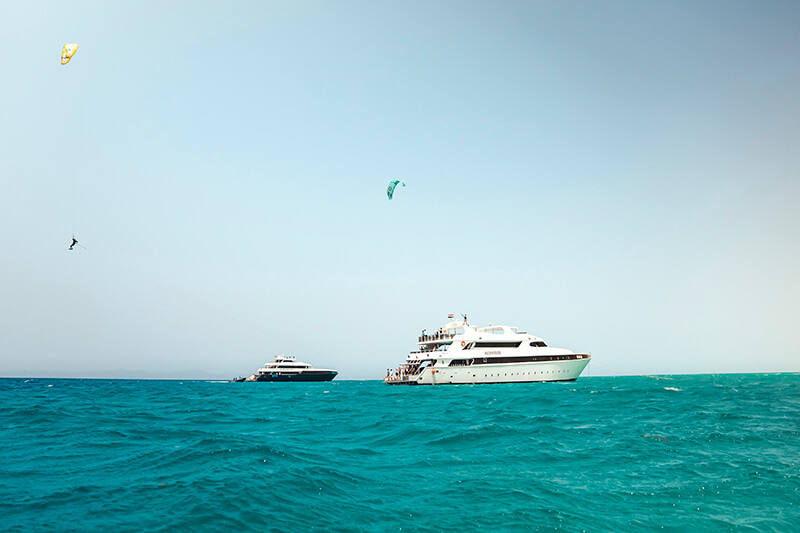 After quite some prepping, a plan of action was formulated. I was boarding a flight to Egypt on a content creation mission with Dutch filmmaker Jil Van Dijk. It felt somewhat empowering working with a female filmmaker. Being female in a male dominated industry feels like there is a need to prove ourselves. After the first 10 minutes of meeting Jil I knew we were going to be a great team together. Our first stop was El Gouna, about 40 minutes from Hurghada airport where we stayed at the Three Corners Ocean View, a lovely all-inclusive hotel. The kite spot is great at low tide when the water is quite flat; at high tide it gets choppier. It’s a super nice vibe at Makani beach club – there is a cool chill out area, après kite bar, and restaurant lounge on the beach where you can hang out after your session. Happily the wind blew almost every day we were there, but on the odd windless day you can go wakeboarding as there is a wake park close by in El Gouna. The marina there comes to life at night and there are many nice places to eat out. Tuk tuks are the main transport so you don’t need to hire a car.

The start of the trip went well and we stacked up the clips and shots on our first few days of shooting. Then, after a week in El Gouna, it was time to change location. We headed to the Hurghada Marina and boarded the Big Dayz Kite Safari boat. It was a huge boat and from the moment I stepped on board I knew I had to jump off the top with my kite! The first day of the trip was looking like the strongest wind, so it was all systems go from day one. My adrenaline was high; it was not easy to get up to the top of the boat whilst flying my kite. The wind was strong and gusty and there were quite a few obstacles climbing up the three decks. Once at the top I was concerned about a gust of wind pulling me off the boat before I was ready… I was quite sure I would hit the deck if that happened. Thankfully it all went well and the actual jumping part felt somewhat easier than getting up there! There will be a video dropping soon… 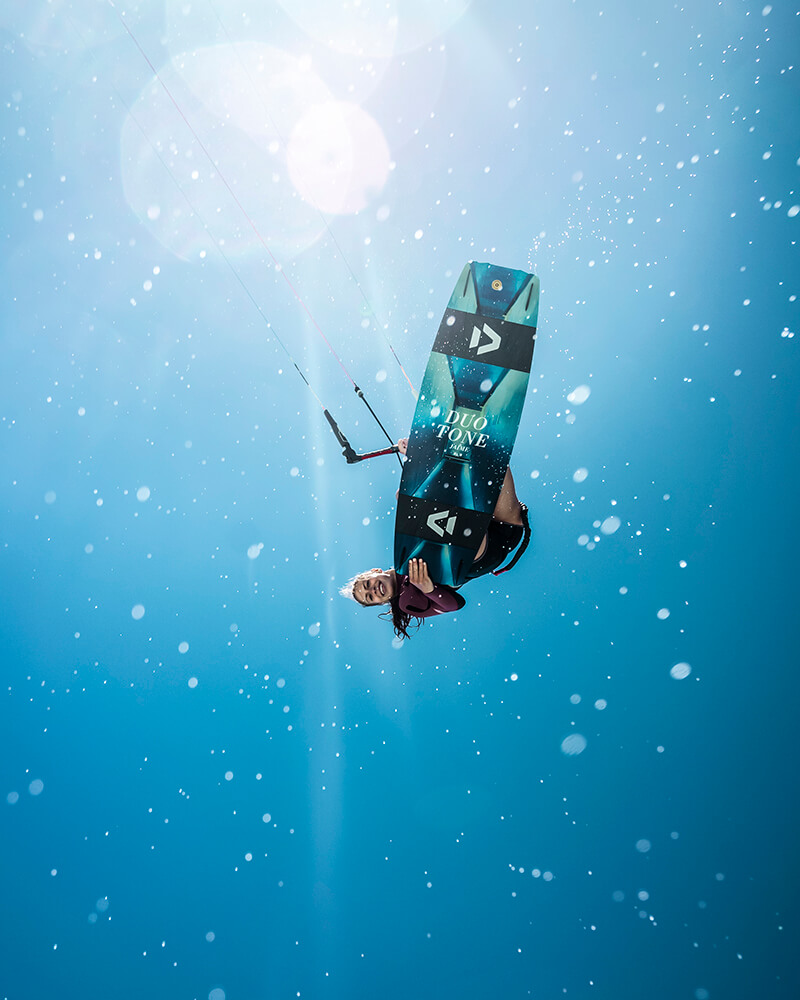 The forecast was looking good for the upcoming week and the plan was to visit many different kite spots in the Red Sea. There is something magical about living on a boat and being around water 24/7. I couldn’t get over how crystal clear and turquoise the water was. At most of the kite spots we found ourselves being the only ones there, it felt quite unreal and somewhat humbling. On the day we had no wind we spent the whole day in the water free diving and getting some B-roll footage. The Red Sea is awesome for diving. At sunset we got super lucky: a pod of about 15 wild dolphins appeared. We followed them in the speedboats and it seemed like the dolphins wanted to play with us, staying around the boat. We jumped in the water with them and I discovered that if you dive down deep the dolphins seem to like it – they get curious about you and come close. I was very grateful for this experience, it was my first time swimming with dolphins, something I’ll never forget. They really are the most beautiful creatures.

We did a boat tow up too that week which was pretty crazy, I’ve never been so high in my life! Marco from the boat safari showed me how it was done, and he went mega high. It was an epic light-wind activity. At the end of the trip we visited a kite spot close to Hurghada that I was really drawn too – I’ve never seen scenery like it before in Egypt – there was a huge island that looked like Mars that I couldn’t stop staring at. I kited back to the boat and told Jil we had to shoot there, so she jumped in the speedboat loaded with her cameras and we headed to ‘Mars’. Unfortunately the water was pretty choppy and the island made the wind rather gusty and it was not easy to get the shots as the little speedboat was rocking so much, but despite the challenge Jil managed to get some. 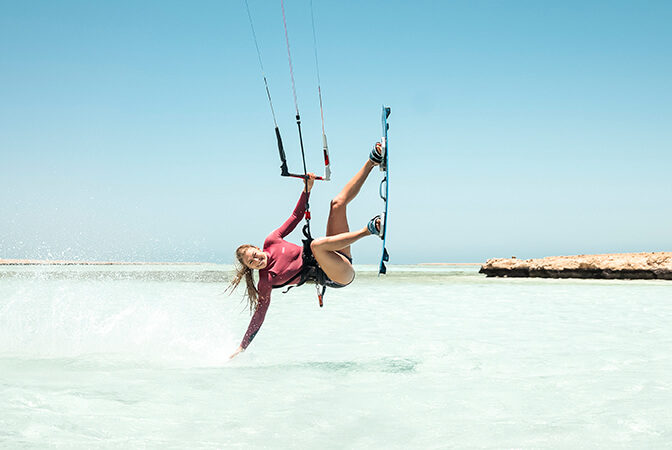 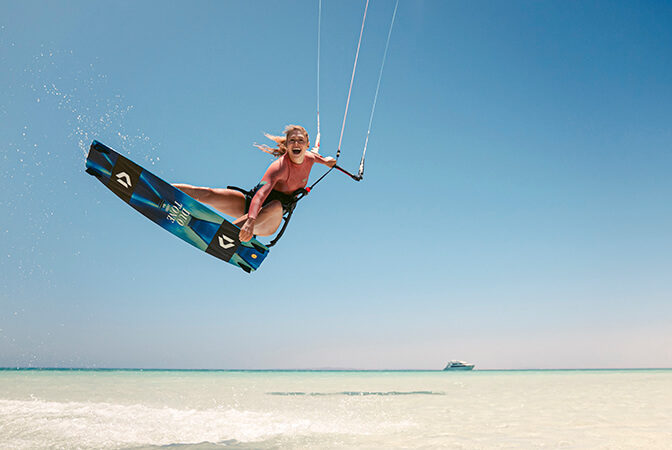 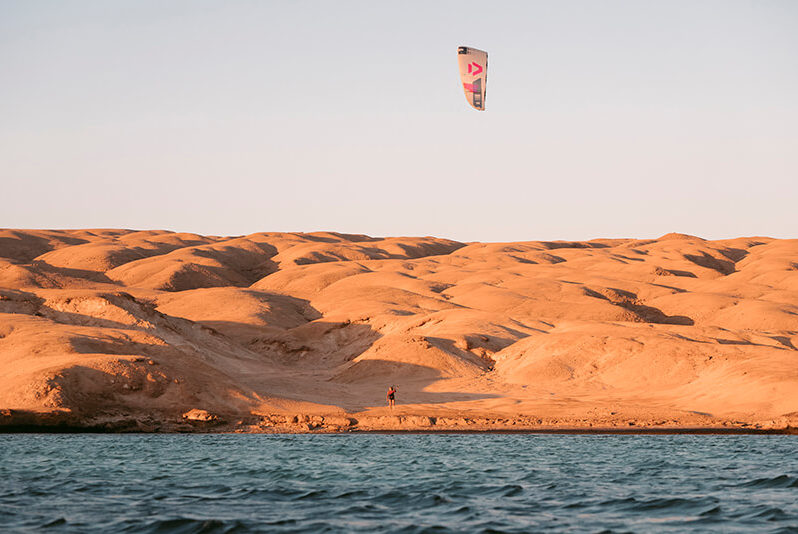 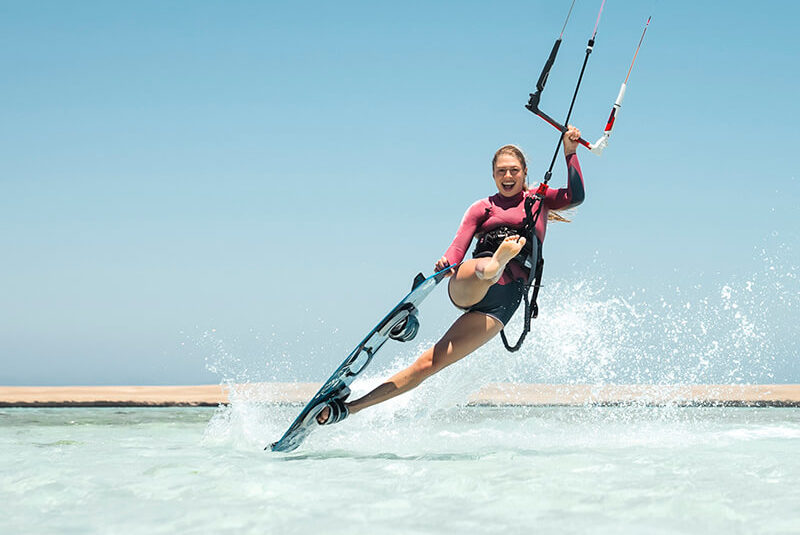 The week on the boat flew by and it was action packed every day. The other guests made the week even more enjoyable – you bond so much in a week on a boat together. The service onboard with Big Dayz was top, with the kindest staff, and the food was great. After a week onboard we headed south on the mainland. We were on a mission to find a camel in a deserted offshore spot… Part of the reason I wanted to go to Egypt in the first place was to fulfill my slightly mad idea of filming jumping off a camel into the water with my kite! I found a guy with a camel and arranged for him to meet us at the kite spot at sunrise… We waited, waited and waited some more but he never showed up. It was quite frustrating – I am not naturally a morning person and we had got up at the crack of dawn for nothing. I rearranged with the camel guy to meet at the spot for sunset… Surprise, surprise… he didn’t turn up. I was getting quite annoyed at this point and on the verge of giving up on the camel shoot idea. Working with people from different countries and a different work mentality isn’t always easy. I arranged again for the third and final time with the camel guy. We went to the spot and waited eagerly in the hope that he would show up this time. Time ticked on and there was no sign of him. But finally I got a call that he was on his way. He was a couple of hours late but when he arrived I had to laugh; I couldn’t help but somehow like him. He appeared from the middle of the desert riding towards us stood on top of the blooming camel – it was quite the entrance! At long last we finally got the camel shots and filmed the video. It was worth all the frustration. 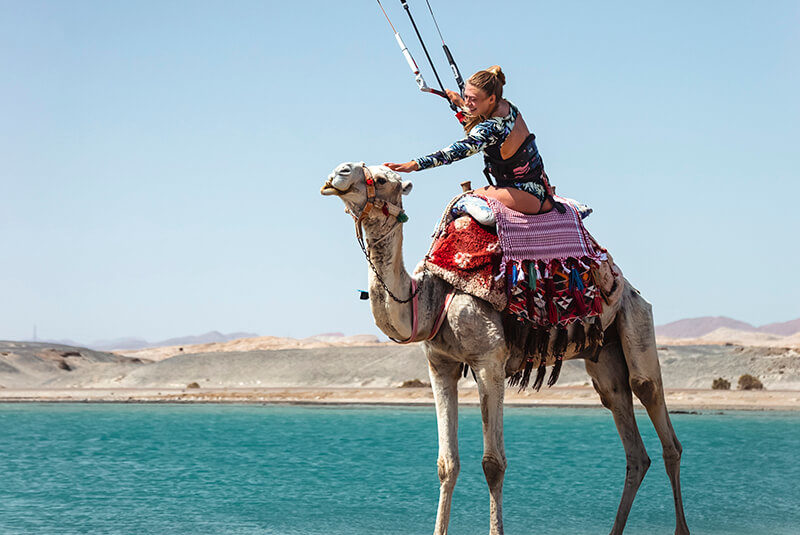 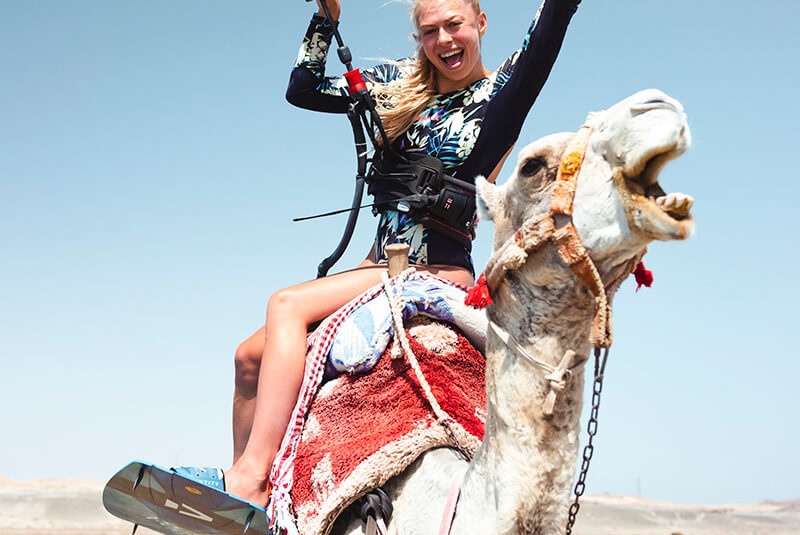 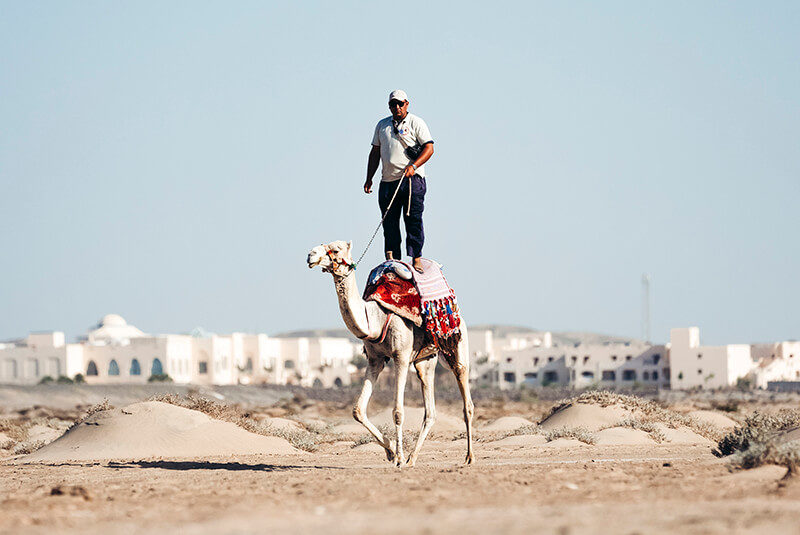 Now the camel jump was ticked off, the next thing associated with Egypt is pyramids… If I couldn’t actually kite at the mythical pyramids (they are quite a way from any water!) maybe I could fabricate them to create some kind of optical allusion of kiting by them. I felt like I was revisiting my childhood, with buckets and spades building a pyramid sandcastle. I actually quite enjoyed it; I guess the inner child in me has still not grown up! I think it turned out pretty cool in the shots. I love to be creative and try different things out. 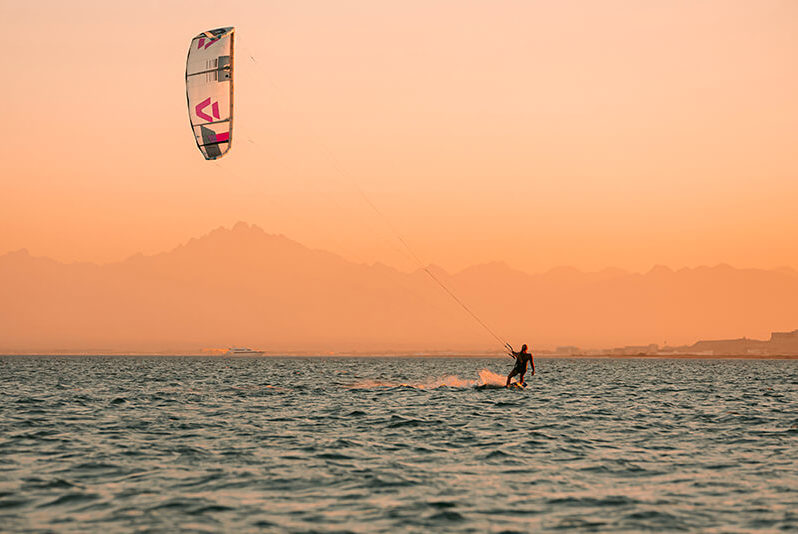 It didn’t take long for reality to kick back in after building sandcastles. The UK government announced that Egypt was about to go on the ‘red list’, so if I didn’t get home quickly I would have to spend 10 days quarantining in a government hotel which costs almost £2000. This is my idea of hell – I go crazy after just one day in my own house. I wouldn’t be able to last two minutes quarantining in a hotel room, I have far too much energy. I booked a flight leaving Egypt the very next day; it was so hard finding a flight because everything was fully booked. It was a mad rush getting a last minute Covid test, packing and wrapping up the last video clips we needed. I then had a connecting flight in Zürich, Switzerland with an eight-hour layover in the middle of the night. I was totally paranoid I would fall asleep in the airport, not wake up, miss my flight to the UK, and have to go into hotel quarantine. I fought the urge to sleep and thankfully made it safely back to the UK. I was a happy girl with memories of a great trip. Thanks to everyone who helped us out during our time in Egypt, and a special thank you to Jil for being awesome and working so hard capturing the content! ■ 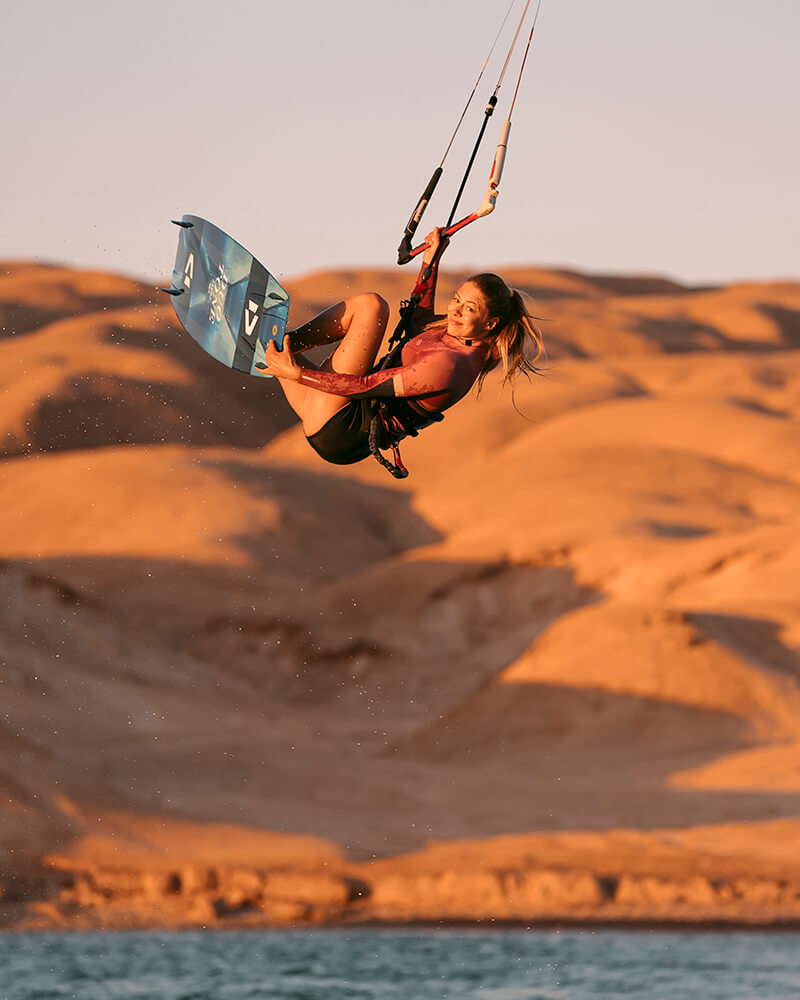 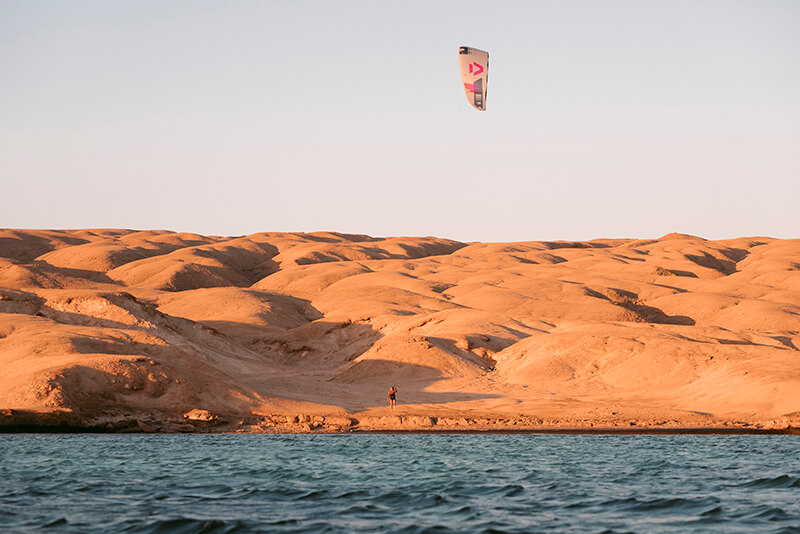