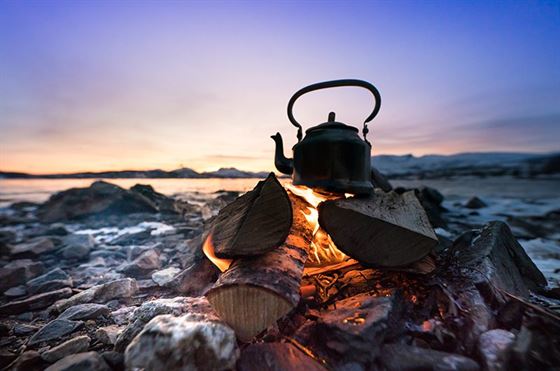 This issue we have two instalments from the queen of the cold, Kari Schibevaag. Autumn sees her take to the ocean and on to the Faroe Islands, then as winter breaks and the temperature and wind chill reach levels that would see normal folk hiding under the duvet, Kari cracks out her 3m and heads out for some properly extreme sub zero sessions.

When you wish for something for such a long time and it eventually happens, you feel as though you are the luckiest girl in the world. 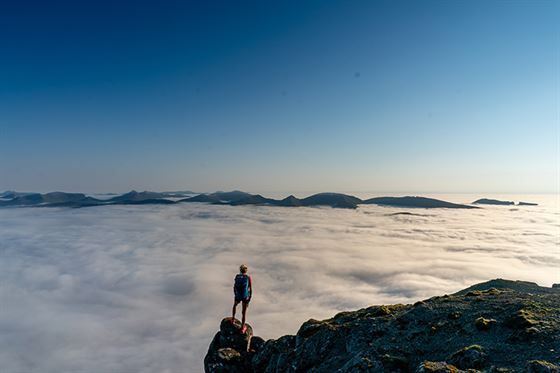 The Faroe Islands have been a dream location for me to explore for a long time. For those who love nature, it has all of the elements you could ever wish for. Having studied pictures and stories of the islands for years, I imagined myself on a mountain or in the ocean, kiting through the waters, and I just knew I had to go there. 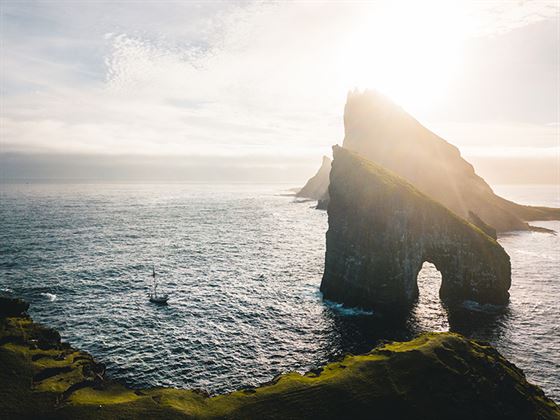 The Faroe Islands have a population of 50,000 residents, who spend their days surrounded by incredible nature. There are more sheep than people (which also explains why they are known for their quality wool) and, although you need to be lucky to get clear sky with sunshine, I leapt at the chance when I was given the offer to sail on the Agir expedition boat. Agir is a sail boat owned by a few friends from Norway who are on an epic adventure around the Arctic Ocean. They have sailed the coast of Norway, Shetland and were now on their way to Faroe, living their dream while exploring the incredible landscapes. I was stoked to be able to join them on this section of their trip. 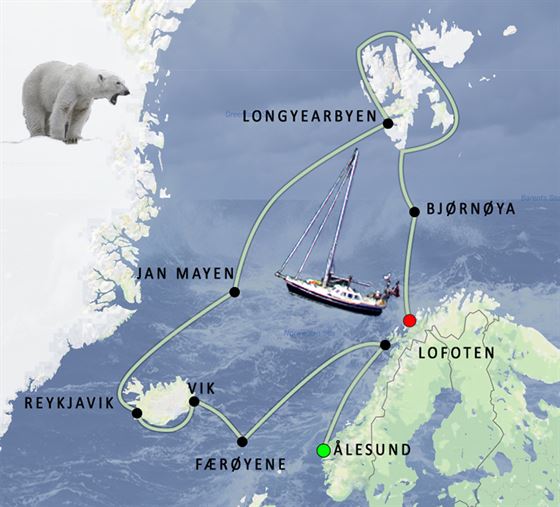 As the boat moved with the waves and the wind blew us forward we were surrounded by huge mountains. There is something beautiful about the way the big cliffs dive straight down into the ocean, chased only by the waterfalls that fall with such grace. The incredible scenery of the mountains makes it look as though they are taken directly from the pages of a fairy tale. We were on our way to Koltur Island, where I couldn’t wait to hit the water and kite. From the map, I had highlighted that I wanted to kite around this small mass of land, with its white sand beaches and incredible hiking opportunities. On the way to the island we passed incredible places like Gasadalur, where we found ourselves sailing between cliffs barely big enough for us to pass through. It’s an indescribable feeling, the feeling of being so small next to something so immense. 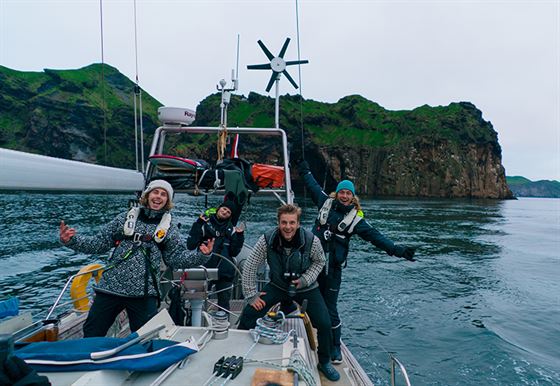 With only two residents on the island, we felt as though we had the whole place to ourselves. We were apprehensive that we wouldn´t have perfect kiting conditions, considering that wind and sun were hard to come by, but we were determined to give it a go. A lot of luck and a positive attitude goes a long way in the pursuit of a good kiting session when you are sailing a boat. On this island there is a strong current, and you need to try not to battle it, but work with it, even if this means spending hours waiting for the current to change so we could move on. We were patient, and eventually the conditions lined up and we scored a great session. The kiting part of the trip had begun. 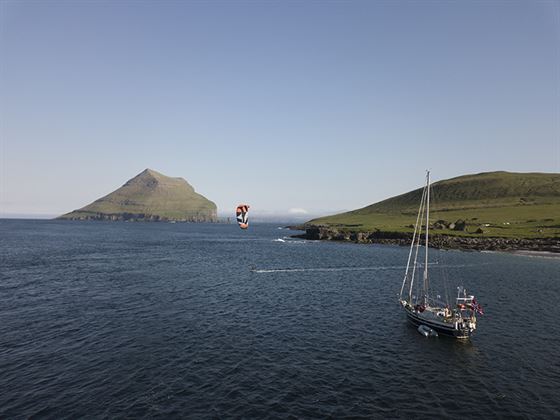 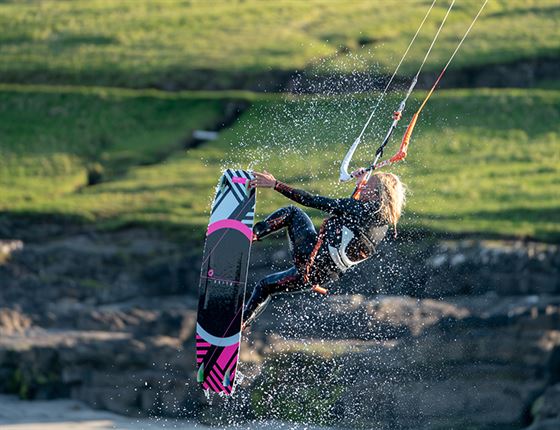 Following this, we reached the harbor of Sørvagur, where we are able to go onto the mainland. It is an incredible place where – a few miles inland, away from the sea – the big lake of Leitisvaton is a perfect location for kiting, with its flat water surrounded by picturesque mountains. The fresh water also doubled as an opportunity for a shower after so many days out in the ocean! There was solid wind to do some freestyle before finishing the day with a hike for insane views over the lake. It was cool to hike up there to see where we were sailing the day before, and served as another reminder of how small we are in the grand scheme of things. 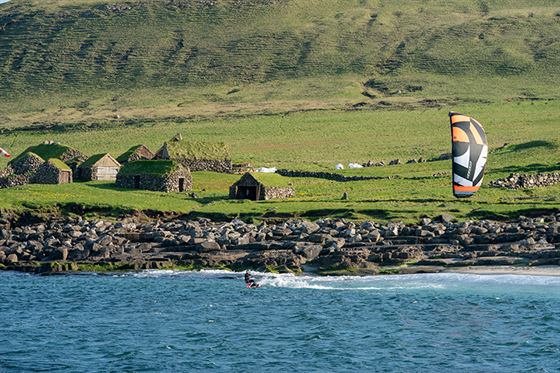 A few of the crew on the boat were surfers, and some days are easier than others when it comes to hunting down waves. On this day we tried to ride the spot by the boat but the waves and current did not allow us. So we rented a car and drove to another spot, Tjønuvik, and found ourselves to be the only two in the water with the sun setting beautifully behind us. 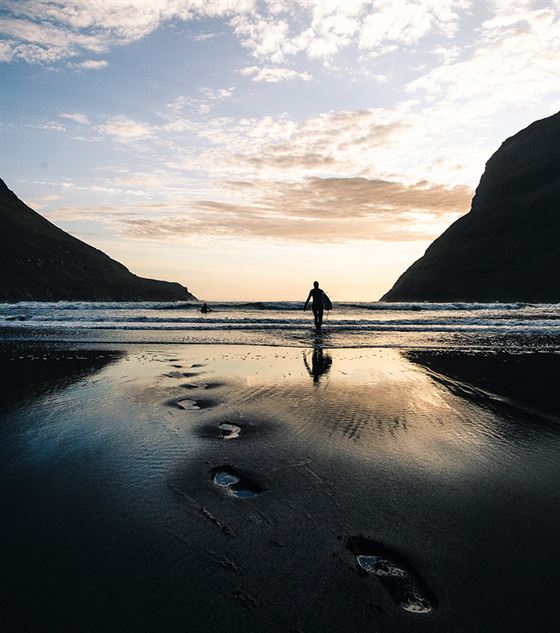 The days flew past with so much left to explore. I couldn’t wipe the smile off my face as we climbed the highest mountain in the Faroe Islands, Slættaratindur. Although the skies were grey, we managed to hike through the layer of fog and witness another amazing sunset.

And so finally it was time to sail to the island of Koltur. When we got there, the sun was beating down but there was no sign of wind. We left the boat close to the beach and decided to explore the island, and shortly afterwards we felt the wind begin to pick up. We used this to its fullest potential and had a really good session. You could feel how strong the current was when you were kiting but I was going with it, making it less of a battle and more of a dance as I jumped in the water alone, kiting around the boat as we cruised with the current. The day ended with a small sail to the main city of Torshavn, where we watched another incredible sunset. In Torshavn, it was time to prepare the boat with gasoline, food and all the equipment necessary to sail in open water. Although I have been getting used to sailing around the islands, I am still a little nervous to hit the open ocean on our way to Iceland. 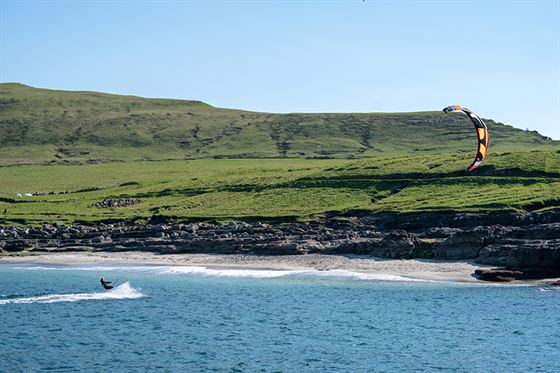 Crossing the ocean was something new for me but what a feeling it was. It felt so free to be out on the ocean. Just us, the boat, and the open water. We were entertained by the whales, birds and seals that surrounded us, and we even managed to get up close with some humpback whales. They were so playful as they swam around the boat, and I really felt as though we connected with them… An incredible end to an incredible trip. 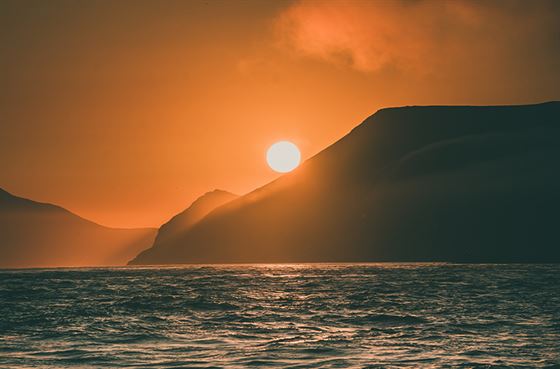 Winter means amazing light, fresh powder, fresh tracks. And a lot of clothing. Winter to me means a lot of fun stuff to do outside. The seasons are changing – everything is white. The snow erases old tracks, life starts over in a way. I live for these changes. 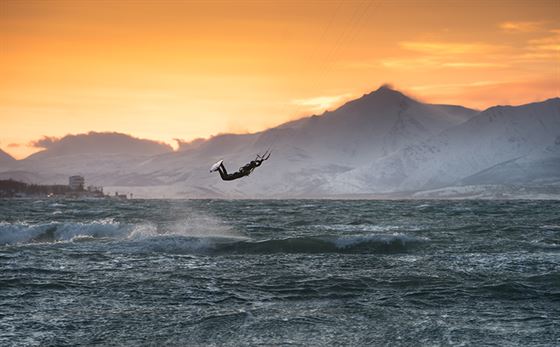 It’s a cold day. Minus 15 Celsius outside and the wind blowing 40 knots. I am in Tromsø and it is the perfect time to hit the water. It’s January, so the sun is not quite back yet, but it’s so close that you can nearly see it. The sky is red, orange and yellow. It is on fire. I am going in the water because the snow is too hard for snow kiting and I miss the sun. It has been gone for some time now and I can’t wait to feel the first rays of sun hit my face. It doesn’t warm you up, but it is the best feeling ever. After two months of polar night season, it’s hard to explain how good those first rays of sun on your face feel… 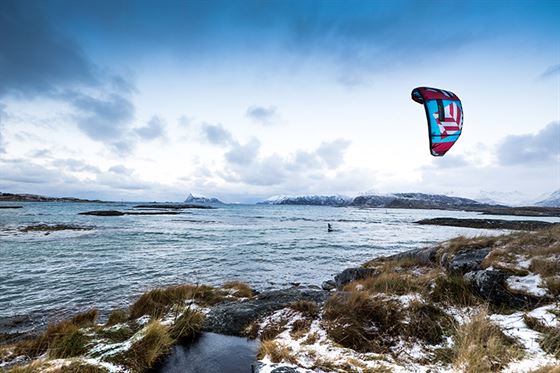 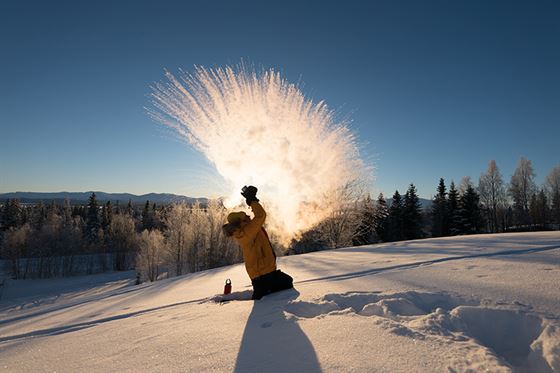 I only have a few hours of daylight before it gets dark again, so I need to get out and use it. In Northern Norway we have two months of darkness during polar night season and the sun never rises above the horizon. It says goodbye, and then to say hello again it gives us the craziest light show on the sky… 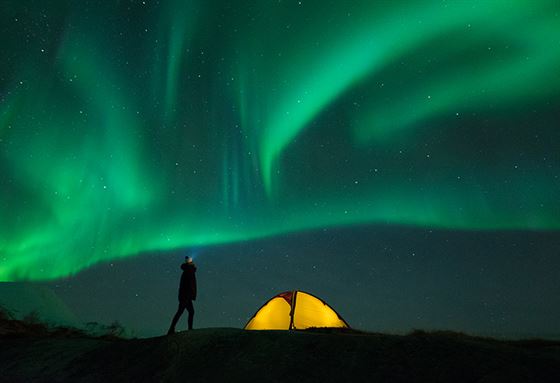 It’s cold and I can feel the wind in my face. It’s a bit painful, but after a while you get used to it. It’s crazy out there. The wind is so strong that I am out having fun with a 3m kite, but after a while I must come back in because everything is frozen. My lines, depower and wetsuit are covered with ice. It’s hard to do tricks in these kinds of conditions, but the feeling is still really special… 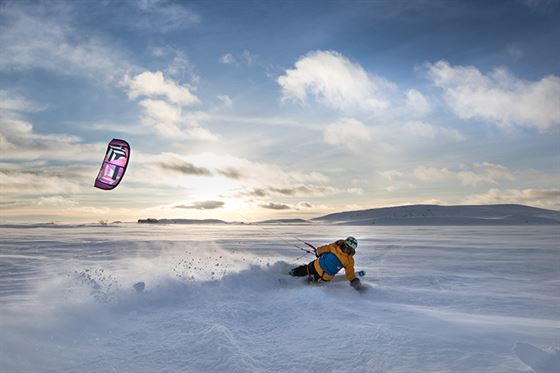 The atmosphere, the cold weather, the light, and the mountains covered in ice and snow. Everything is so beautiful up here. I can only do one session because when you stop, the cold temperature takes over your body. It’s all about moving. If you are moving, you are fine. But as soon as you stop, the cold gets painful. 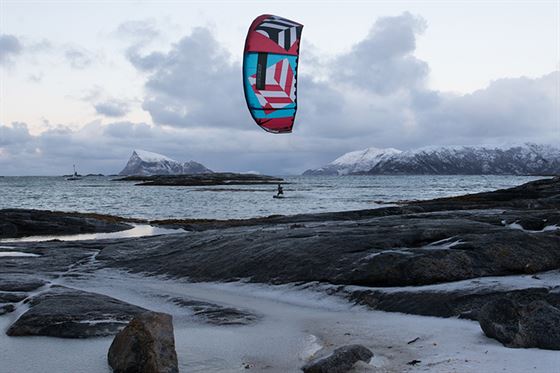 The challenging part is to change out of the wetsuit, but if you are fast and put some hot water from a thermos on your feet and hands you are good to go, or if you do some running and jumping then you’re fine. Your body will adapt to the cold. The first time is the hardest, but after that it gets easier and you can stay longer out there. 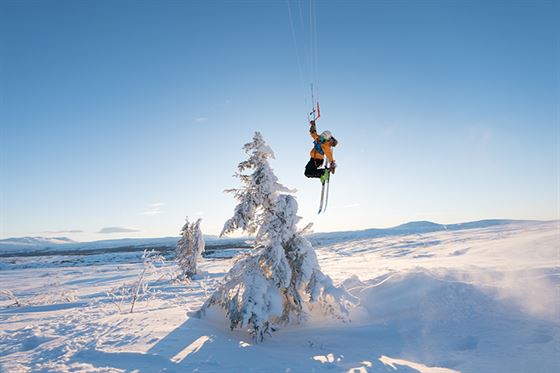 Life is harder in the winter but in my opinion it is so much better than the hot sand, sun cream and palm trees. Not only does winter give me good conditions in the water, but it also brings crazy days in the powder snow. Snow kiting takes you to whole new places and you can reach the top of untapped mountains by using the wind. 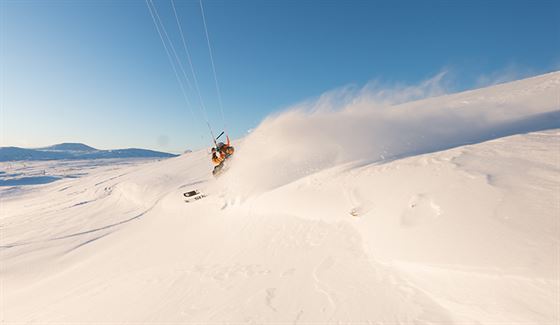 For this first session I just cruise on my kite and look at the nice light, just jumping around, and feeling free like a bird. This is the feeling I get when I’m out there. I also like to use the kite to transport me on longer trips. Bring my tent and spend some days outside in the wild. Life is easier with wind – and a lot more fun.
A lot of people tell me that it’s too dark up north in winter. And yes, it’s dark in the north, but that doesn’t mean you can’t do stuff. When it’s dark, it means the Northern Lights are coming, and you should be outside to enjoy it. The Northern Lights are only visible during the autumn and winter season and the best way to see it is outside in a dark place with no light pollution. You can hike up a mountain, stay by the ocean or just sit in a tent looking out at the aurora show. 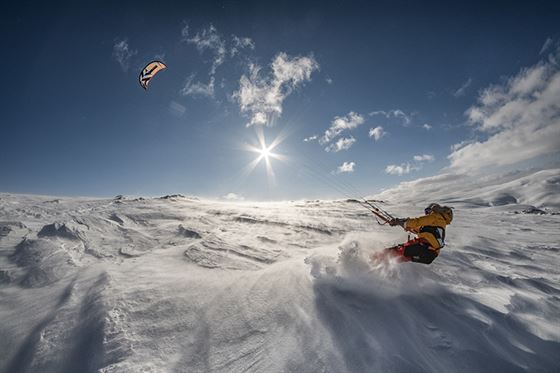 I love winter (I think everyone knows this by now!). I love the cold days where I am out in the ocean or in the snow spending time with friends or my dog, Truls. I love freezing my ass off, I love testing my body limits: how much can it handle? I have always been like this, since I was a child.

So let’s see what else this winter will bring. I am ready for it… 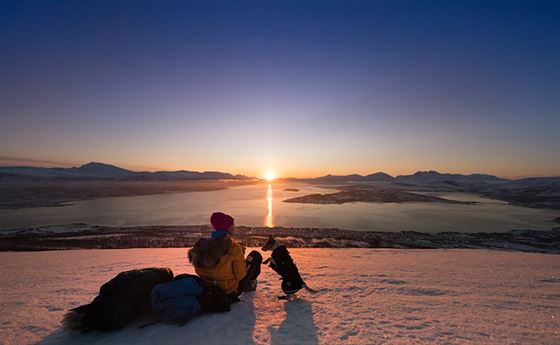 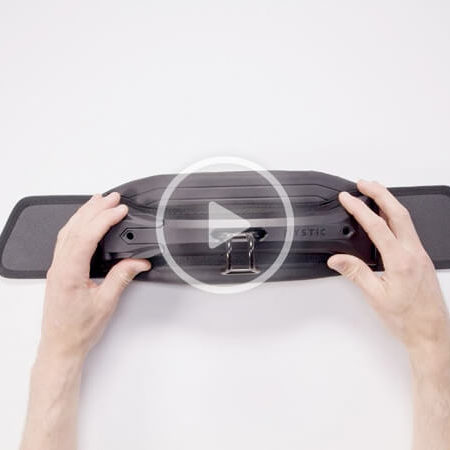 Mystic have announced that they'll be doing a precautionary replacement of the hook on their generation 1 Stealth bars. Here's what you need to know... 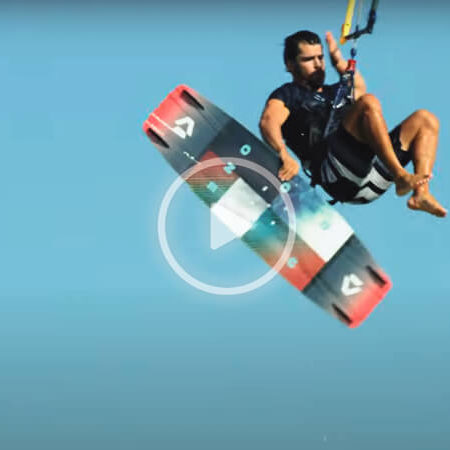