We caught up with Thijs van Westing, co founder of Viking Bookings, to hear how he went from washing windows in Holland to designing and selling the software that is helping wind and watersports companies around the world streamline their booking process.

So Thijs – tell us a bit about your journey over the last ten years.

When this adventure started I was a window washer in the Netherlands. This job wasn’t my dream job, I complained about it all the time, and a buddy told me – Thijs, you’re wasting your life, go windsurfing in Aruba man. A few weeks later I got in a fight with my boss, and I wrote down on some paper – I quit, as of next month. The boss didn’t believe me. Anyway, one month later, I told him hey, this is my last day! I’m flying out to Aruba tomorrow. And that was it – I went to Aruba. At the time I planned to go for 6 months, but I stayed for 6 years. I met my girlfriend there, and we had a baby one month ago.

Aruba is in the Dutch Caribbean, and it’s the 3rd most windy place in the world. I started kiteboarding there and returned to the Netherlands 5 years ago to start Kiteboardschool.nl. Me and my buddy Roel started out with a bicycle and trailer behind the bicycle, and after 4 years we grew to the biggest school in the Netherlands, with 30+ instructors.

At that time we started going crazy. We weren’t on the beach anymore, we were in the office calling and emailing and planning, with 2 other full time planners. We spent all our time staying in touch with customers and instructors, and we figured there ought to be a tool to make this easier. We looked, and we couldn’t find anything anywhere. We tried a few different options, but nothing worked. After a while we decided to build our own, and that’s how Viking started. We planned to build it just for us, because it was something we really needed.

After a while I started getting requests for the software from other schools, which is when we realised that this might be a company in its own right. We’ve been rolling it out ever since, and the feedback has been great. Whenever I go to a new school, I sit there and I hear all the stories, and everybody has the same stories! Everybody has the story I had. I put the software in, and then one month later I get the phone calls… “Man I needed to do this so much earlier”, “this is the best step we ever took”, etc etc. It’s really nice to have a product that people really like.

So as a guy flat out running a kite school, how did you build a software product?

Actually, the same friend who first sent me to Aruba runs a windsurf company. The whole production process is automated end to end. The system manages everything from the boards being built in China to the customer ordering them anywhere in the world. This same guy told me if you’re going to build this, these are the guys you should work with. And so he put me in touch with Beer n Tea who builds this kind of thing, and we sat down for a meeting.

After the meeting Beer n Tea say “yeah, we can build that. This is how much it’ll cost”. And that was it, we signed some papers, and paid the money. I’d say this was one of the biggest chances we ever took as entrepreneurs.

6 months later, the software arrived. The moment we got it, all our problems were gone.

That sounds too good to be true, but I remember one day, me and my buddy Roel, we were sat in a sailing boat and normally on a day like that (with a windy day coming up) we’d be calling and emailing like crazy. This time we sat in the boat, approved all the lessons on our phones, and then we started high fiving because we didn’t have to do anything for the rest of the day.

We used it for about a year and then all our competition started asking if they could use the system as well. We gave the system to a few of our competitors, as well as some sailing schools and surfing schools, and based on the feedback we got we started adding features.

That’s when I realised that my passion was to help other schools rather than running my own school. So I sold Kiteboardschool.nl, and now I’m focused on Viking.

You built this for a huge school in Holland. Does it work for smaller schools too?

Yeah, the benefits are different, but the software works for any size school. Just one instructor, or the biggest schools there are. It’ll save everyone time.

Can you give us a summary of how it works?

Every instructor on the team has their own account on the system, and it’s up to them to put in their availability. The system admin has an overview of this, and can says what the instructor is capable of in terms of sports, abilities, etc, and at which locations.

The student books and pays online, and then chooses multiple days for availability. On the calendar the student can only see open slots, and books for the slots they want. That booking is with a particular instructor. And of course if group lessons are already booked, then it’ll show if there is space left on that group lesson and won’t let the instructor be booked for a private lesson.

The real beauty of the system is in this next bit. One day prior to the lesson, the system admin has a schedule for the next day, and they can see weights, age, experience, and the track record for instructors.

Based on the conditions, let’s say it’s 15 knots and we can run beginner lessons with light students, planner can click on certain students and “approve”. Then the system sends emails and texts out confirming the lesson for the next day, for both students and instructors.

For everybody else, you say cancel. Then they get an email explaining the situation, and a prompt to log in and reschedule.

This covers all eventualities, and suddenly you can go from 2 full time planners to one person, 30 minutes a day. For me the greatest advantage was that I got this great overview of the operations, and started using all that free time to connect with the customers.

What’s been the best moment since you started working with this software?

2 weeks after my girlfriend gave gave birth, it was getting cold and dark in the mornings in Holland, and she’s looking out the window feeling sorry for herself. So I said “hey, why don’t we go to Aruba for the winter?” She got excited, and now we’re going to Aruba for the winter. That was the dream with this software. I wanted to be location independent, and now I get to help other people free up their time too.

Thanks to Thijs van Westing for sharing his story with us. You can check out his software at www.vikingbookings.com 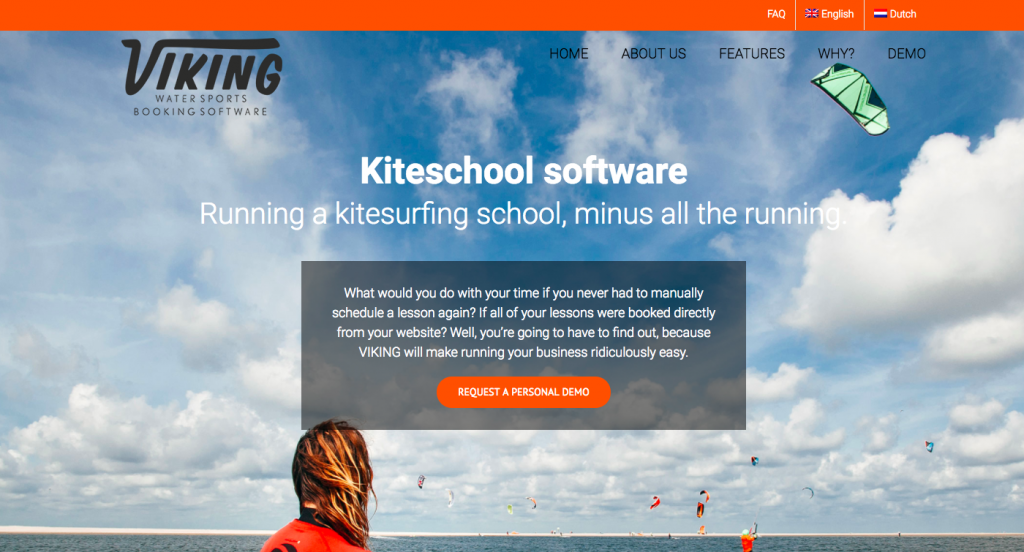