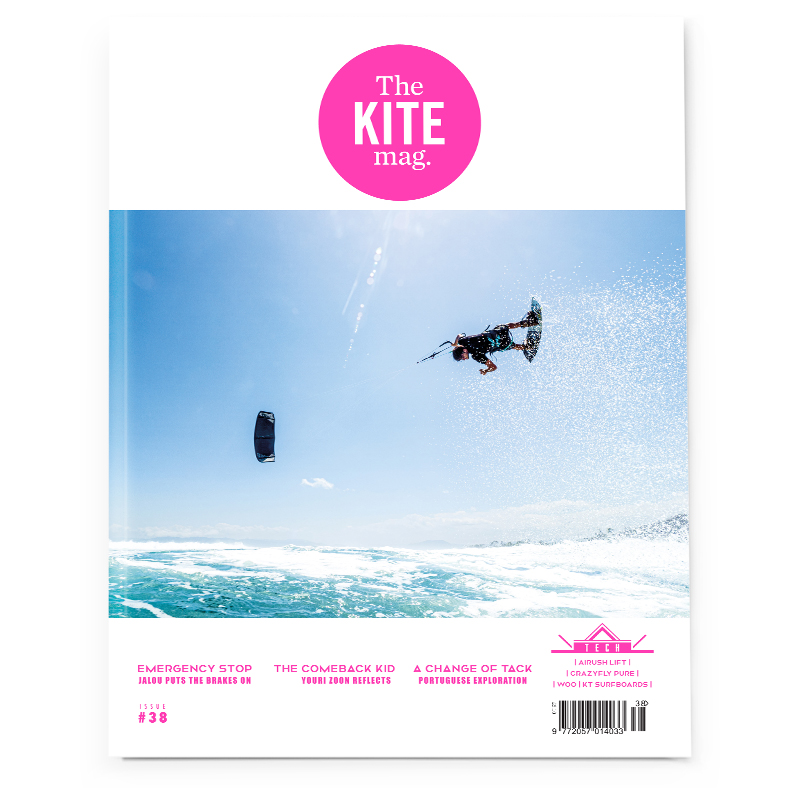 As we're prepping the next issue of TheKiteMag for release, we thought we'd give you FREE digital access to issue #38!

Check our sneak preview of what's inside below…

“It almost felt like it couldn’t have come at a better time for me, which might sound strange, but Covid-19 does have a positive outcome for some of us. I’ve been living my life as a pro kiter for over 15 years, and it felt like being on a fast train, where I kind of lost myself for a little bit…”

Following an epic trip to the Philippines, sandwiched between a good amount of time spent discovering new spots in Cape Town, Jalou Langeree's particularly heavy travel schedule came to an abrupt halt. But it had its benefits…

“I wish I had started going to the gym before all the injuries. I try to tell the new generation this – you don’t have to be massive or bulky, lifting 200kg, but you need to work out and take care of yourself. There aren’t that many people that get to the top of their sport after an injury, so make sure you get yourself really fit and strong to avoid the injuries in the first place.”

Photographer Andre Magarao interviews his friend and occasional subject matter, Youri Zoon, who contemplates his high profile career to date, the slip-ups along the way, and what advice he would pass to the next-gen.

“I now have over 20 years of experience in the industry, which helps me a lot to analyze and structure situations in a decision process. But it is also important to stay hungry, by which I mean to remain open to new ideas and to be willing to stray out of my comfort zone.”

Overseer of Duotone, one of the biggest kiteboarding brands in the world, Till Eberle did not get to this point without making big decisions and bringing together an elite team of riders. We gather some questions from those who know him best, and answers from the man himself.

THE MISSION: A SOCIALLY DISTANCED SURF

“These shots are from a wave we have kept on the down-low for a while now – it is a bit of a secret spot… A critical slab that breaks directly in front of a dry rock. And if you fall on the wrong side of the rock, you WILL get slammed onto dry lava. The spot is also out of phone service range, miles from rescue, and it is impossible to know if the wave is working unless you hike for an hour to check it. So it is a bit of a commitment!”

Hawaii escaped the lockdown brunt, but travel was muted. This proved tricky for some but not for Patri McLaughlin, who used the time to scout one particularly mythical spot close to home…

“I head out onto the sand spit that stretches out into the lagoon for the daily wind check. And that’s when I see it. Downwind, motionless in the water sits the Milagrosa: the ferry that was meant to leave for Puerto Princesa the night before and return in three days’ time to take our 25 students and teachers off the island.“

Just another day in the globe-trotting life of World Class Kite Academy tutor Polly Crathorne and her eager students, as the next-generation crop of names bound for the pages of TheKiteMag hone their exceptional skills in between classes and homework…

A CHANGE OF TACK

“It all started off great – we joined the Naish International team, filled our calendars with competition dates for KPL park events and GKA Freestyle tour stops, and started planning our first trip to Hawaii to shoot the new line of products with the new team. We were looking forward to a busy and productive year of travel and events. Then 2020 started dropping bomb after bomb…”

Christophe Tack and Helena Brochocka were faced with huge disruption to their otherwise dialed-in plans. On the plus side, they had their health, each other, and limitless Portuguese potential to enjoy…

“After years chasing the tour, at the end of 2018 I just felt it was a time for a change. The idea was to have an open schedule in order to chase some of the best swells around the world and make sure to bring someone along to document it properly. I decided to visit some old favorites and made sure to tick a few new locations off the bucket list. Sure, there were some stressful times, but in the end it turned into one of the best years of my life with some memories I’ll have forever…”

Keahi de Aboitiz gives us the inside scoop on his recent barrel-loaded long player, Tunnel Vision, with full descriptions of some particularly memorable pull-ins around the world…

THE MISSION: A SHOCKER

” have ridden in a lot of storms over the years, and the nature of UK weather means fast frontal change is nothing too unusual. However, this session was crazier than any that I have had before. About thirty mins into my shred, with a few tricks in the bag, some heavy rain came in, along with a sharp rise in the wind strength, and a darkening of the atmosphere.”

Making the most of a passing storm front, the enjoyment of a post-lockdown kite session on the Isle of Wight was almost interrupted as Tom Court found himself covered in static and discharging his own lightning bolts into the water. No joke, we actually have the shot..