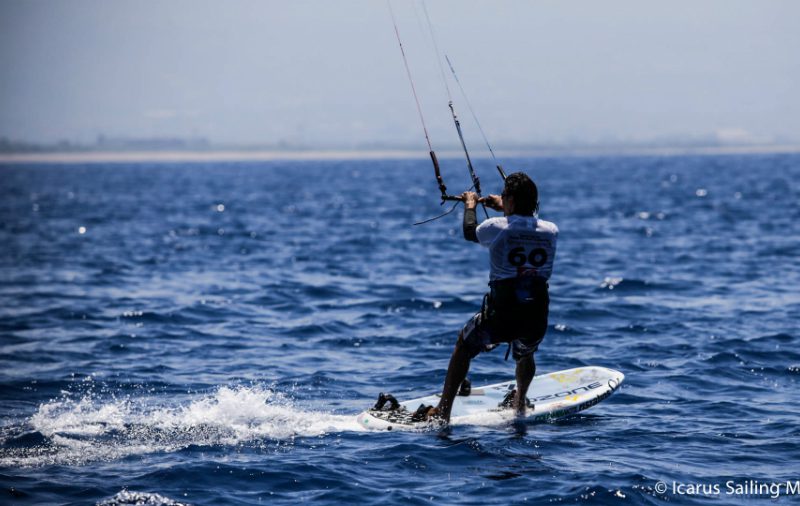 Hang Loose Beach, Gizzeria—The world’s leading course board riders battled for position in a series of qualifying races that saw the fastest men and women swap the top spots in their respective fleets at the IKA Formula Kite World Championships in southern Italy. 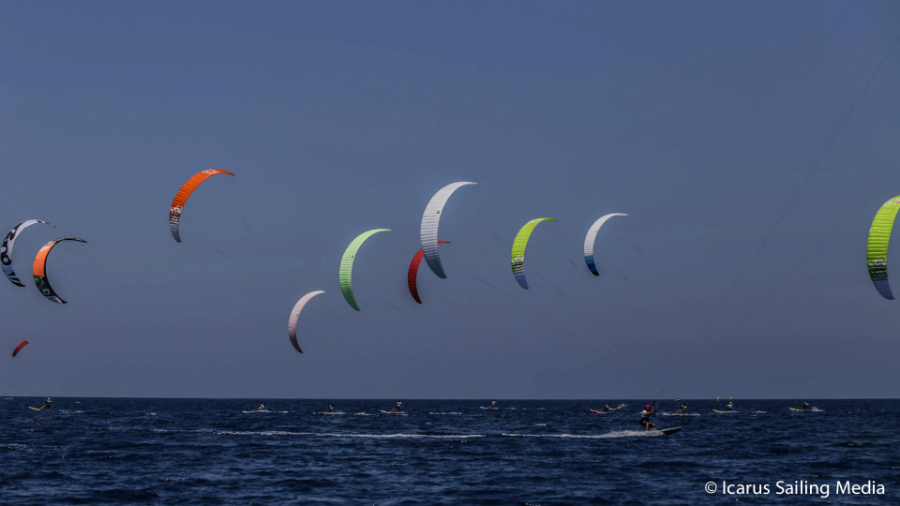 Ozog’s position at the pinnacle of the men’s ranking by virtue of a bullet and consistent seconds and a third in a ideal racing conditions, with flat waters and a Mediterranean thermal breeze that built steadily to about 13kts through the afternoon, gusting to 17kts.

While Ozog’s racing was consistently strong, it was a mistake by Florian Trittel (ESP) who had notched up three bullets in the “blue” fleet and would have taken a second had he not been disqualified in his day’s final race for crossing the start line early. 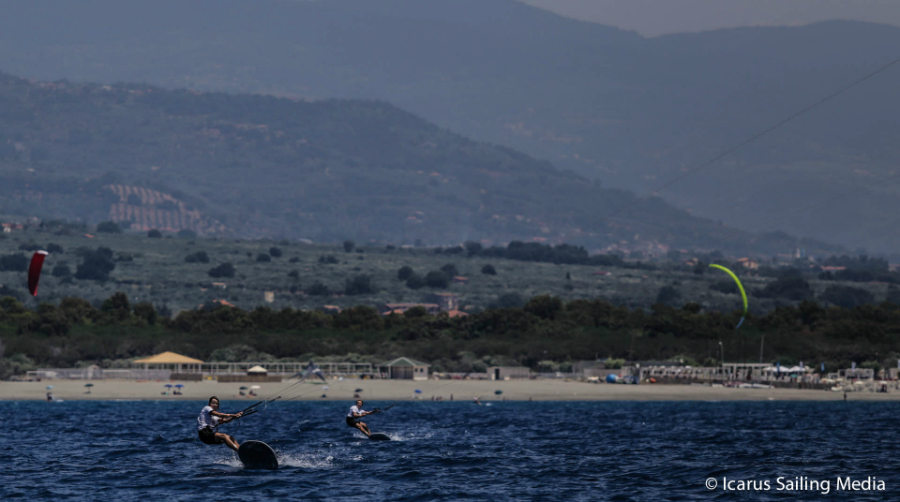 With another four races for each qualifying fleet set for day two, the young Spaniard should be able to discard that disastrous result which could catapult him back up the standings for day three and four when the men will be seeded into the top “gold” and bottom “silver” fleets, ahead of the final day’s medal races.

“I’m happy for now after a good day so far,” said Trittel, before his race disqualification. “I have trained hard for this and I have a physiotherapist — actually my brother — looking after me between races. This is just the qualifying fleet, so it’s not the top of the top. But you’ve still got to start strong.”

With the “yellow” fleet first on the water just after noon in a breeze of between 8kts and 11kts, the riders put up their biggest 18m foil kites that ensured the first finishers completed the two laps of the windward-leeward track just off Hang Loose Beach in about 12 minutes and 15 seconds. 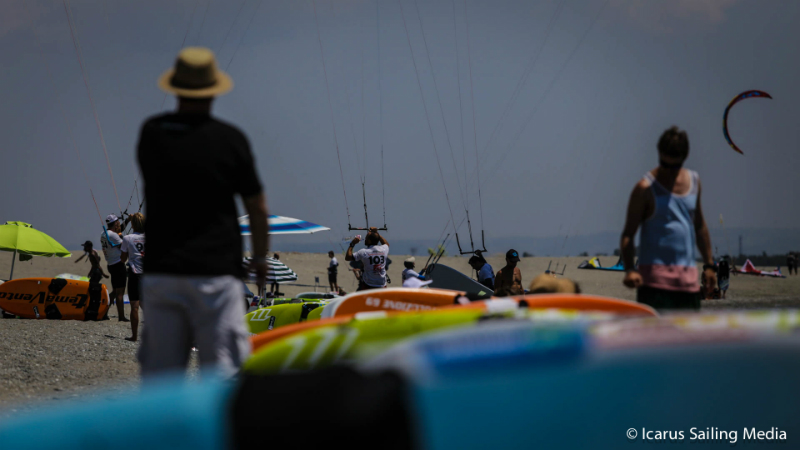 Reigning Formula kite world champion Maxime Nocher (MON), fresh from his victory in the KiteFoil GoldCup Italy on the same track, opened his account with a bullet.

But Olly Bridge (GBR) had ceded the lead to Nocher by virtue of a mistake on the upwind leg of the opening race, when he misjudged the lay line to the mark and hit it, forcing him to do a 360 degree penalty turn to avoid further sanction.
“I just missed the lay line and was pinching [the mark] when I touched it and had to do a 360, so I lost a few places when that happened” said a relaxed Bridge.

Bridge hit back with bullets in the “yellow” fleet’s final three races that left him in second spot on the leaderboard just a point adrift of Ozog, while Nocher remained in close contention in third and Bulgaria’s Alexander Bachev sat in fourth. 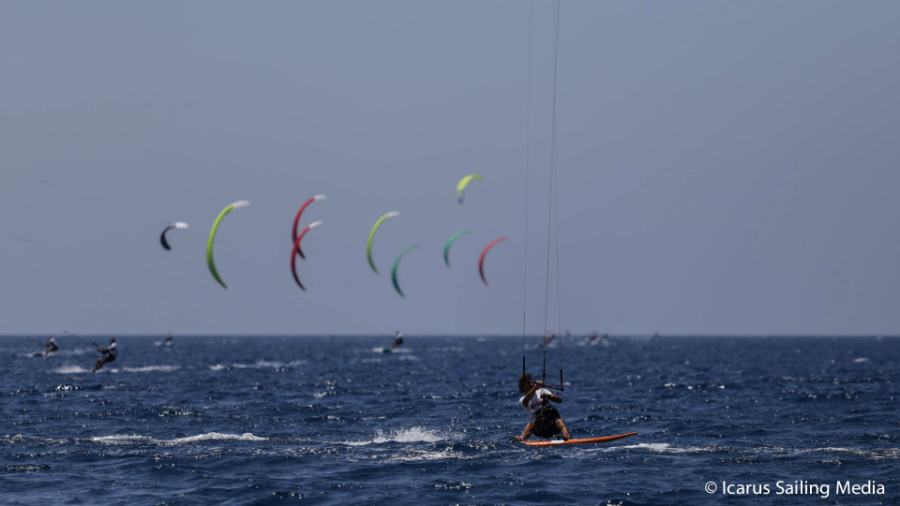 Bridge’s mother, Steph had her hands full with the young Russian Kalinina who opened proceedings in the 11-strong women’s “red” fleet with two bullets in the lighter breezes earlier in the day, starting with her 18m Elf Joker5 foil kite before switching to a 15m kite.

Kalinina conceded that Bridge had made a mistake judging the lay line to the upwind mark forcing the Briton to tack again and allowing the Russian to sneak through for victory. But in the women’s final race in increasingly fickle breezes as cloud cover built from the landward side, Bridge repaid the compliment with a finely-judged downwind leg that enabled her to overhaul Kalinina on the finish line.

Both women are eligible of the Kite Grand Slam prize for riders competing in both the Formula kite worlds and KiteFoil GoldCup. But the highly-experienced Kalinina was having to make adjustment after an intense week racing the hydrofoil board.
“The Formula board is just so much harder on your legs and ankles,” she said. “Compared to foiling it’s tough. There so much noise on the water. Not to mention the lay lines, which are completely different.” 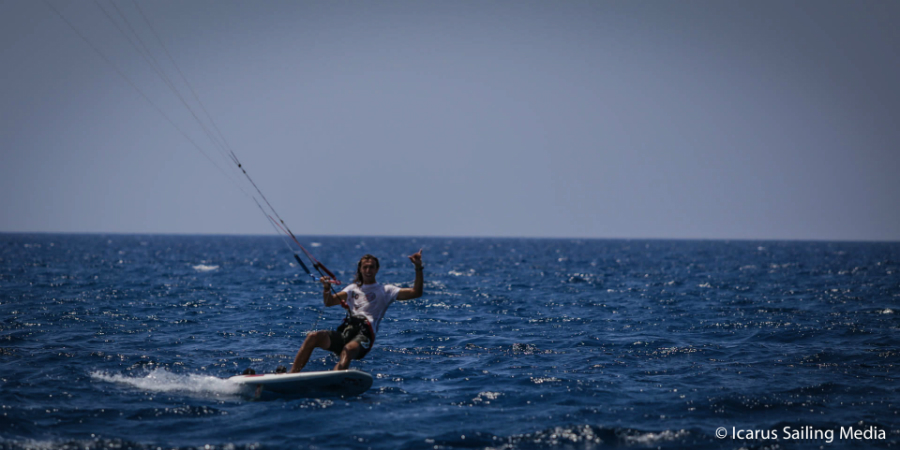