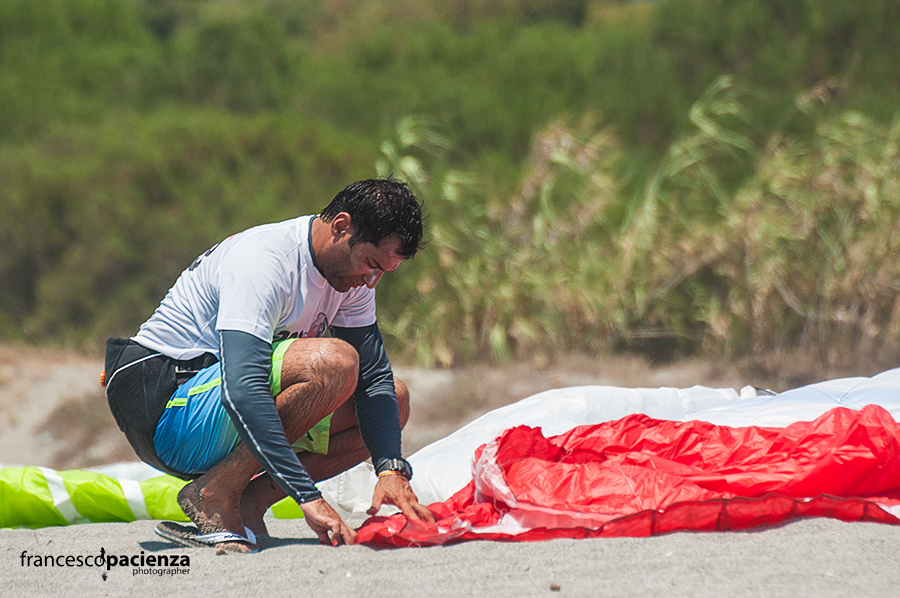 Hang Loose Beach, Gizzeria — After a tough day on the water in near perfect conditions at the kite racing worlds in southern Italy the top of the men’s leaderboard was juggled by a flurry of upheld protests in the jury room.

Reigning world champion Maxime Nocher (MON), who had led the order, found himself pushed down the field and was languishing in ninth position overall following a disqualification for a start-line infraction that cost him dearly. Germany’s Florian Gruber, also a former world champion, was the main beneficiary of the shuffling of the pack, leaping from third spot to first at the top men’s “gold” fleet entering the closing day of the finals’ series ahead of medal races.

Britain’s Olly Bridge also found himself on a snake dropping two places to fourth on the leaderboard after he was disqualified for causing a tangle in his day’s first race, tarnishing his otherwise stellar three consecutive bullets that marked him out as the quickest rider in breath-taking racing. “I’m tired but happy,” said Bridge, 17, after four taxing races, but long before the jury room kerfuffle. “I’m still making some mistakes: some on the start line, some on the course. They’re holding me back and I’ve got to find a way to stop that.”

Yet perhaps the biggest loser was Spain’s Florian Trittel (ESP). He started the day in pole position but was adjudged to have caused a tangle on the start line and was forced to retire after he chanced a risky port tack start along with about half the 31-strong “gold” fleet as they sought the advantage of the lift on the right side of the track.

But the jury room dramas at the International Kiteboarding Association (IKA) Formula Kite World Championships that left some riders seething could all be swept away on day four when racers will be due a discard after five races, provided they can avoid trouble and race fast on the windward-leeward track.

Day three of the International Kiteboarding Association (IKA) Formula Kite World Championships began with an unpromising, fickle breeze. But, like clockwork, the reliable thermal wind began picking up shortly after noon from around 8kts, soon hitting 13kts to 14kts. The men and 11-strong women riding in the “red” fleet, who raced two laps of the track, rigged their biggest 18m foil kites for the opening exchanges but soon swapped them for 15m kites as the breeze stiffened under cloudless blue skies.

For reigning world champion Steph Bridge (GBR), Olly Bridge’s mother, her choice of kite seemed to make little difference. Despite her mind-boggling board speed and almost faultless tactical racing, she continually found herself just a few seconds behind the young Russian, Elena Kalinina, who scored four bullets from four. In the pressure of the day’s final race in a dying breeze, Bridge uncharacteristically missed a tack as she tried to lay the windward mark and dropped her kite in the water, though still managed to save a fifth place leaving her second overall.

Kalinina, who has battled with the experienced Briton and multiple world champion for several years, knew she had her work cut out for her, but feels she has closed the gap on Bridge in the stronger winds where the Russian had often lost out. “It’s very hard because Steph and I are very close,” said Kalinina. “The winner is the one who is best at the small things. You can lose a lot in the gybe or how you judge the lay line to the windward mark. On the downwind legs I can hear her close behind me. I always look back, even though I shouldn’t, because that’s how you fall. On the upwind legs I’ll take a better angle, but she rides faster.” 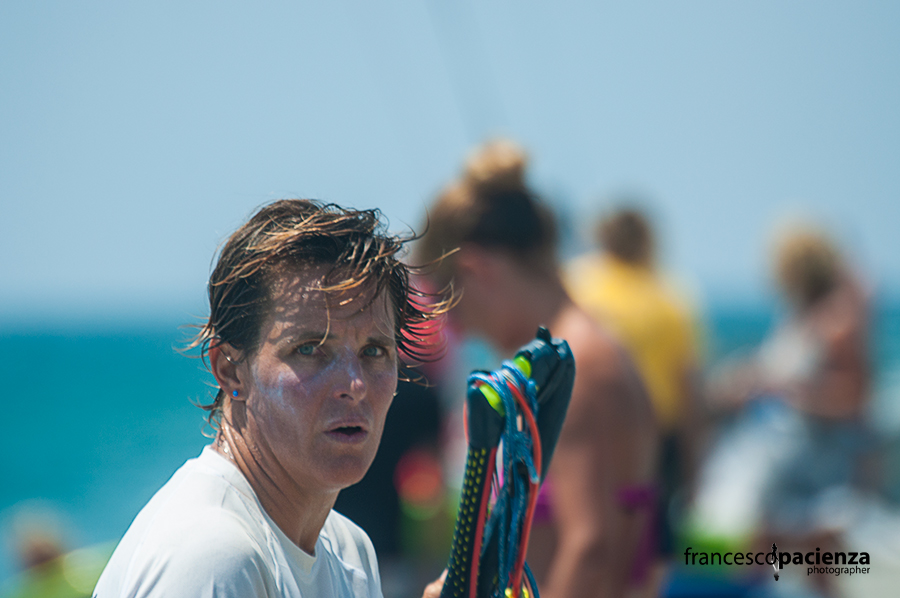