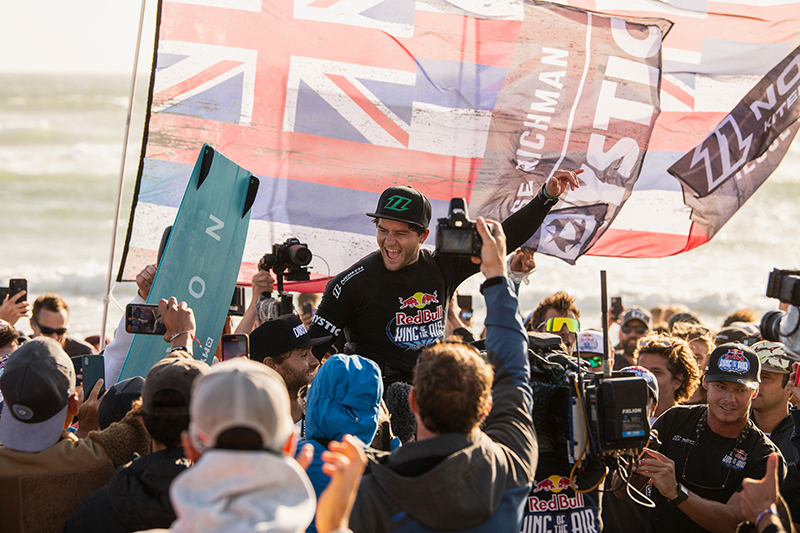 BIG SHAKE UPS FOR RED BULL KING OF THE AIR 2021

CAPE TOWN, 08 SEPTEMBER 2020 – The qualification process for Red Bull King of the Air has undergone some major changes and now is your chance to get your entry in.

The 2021 event, which will run at Kite Beach in Cape Town when conditions are optimal over a two-week waiting period in early February, will feature a fleet of 18 riders. This 18 will be made up of the Top Three finishers from 2020, two or three winners from Fly-To Red Bull King of the Air satellite events; between seven and 11 video contest entrants (the number of slots here will be determined by the ‘Fly-To’ results); as well as two wildcards.

“It’s been pretty wild to watch the evolution of the event and with that the evolution of kiteboarding,” said defending Red Bull King of the Air champ, Jesse Richman. “It’s amazing how much the event has kind of shaped big air kiteboarding and how the criteria has evolved over the years,” the Hawaiian, who claimed his second title in 2020, added.

According to Richman, the progression of the sport will once again take some big leaps in the next two years or so. “Not only in the extreme height department, but in the radicalness and the technicality of the moves performed at those heights,” he said. Richman is excited to defend his title and cannot wait to see what fresh talent and new moves the entry process will unearth in the lead-up.

“The idea with the new entry format is to give a wider range of riders – both pro and amateur – a shot at competing for the crown,” explained Sportive Director, Sergio Cantagalli. According to Cantagalli, there are also updates to the Video Entry rules which will help incentivise young and talented riders to submit their clips.

“Film your three best moves only,” he said, adding that – among other things – “It is important for riders to put together a routine of the three jumps. These video clips may not be older than a year and no previous Red Bull King of the Air entry clips (or part previous competition live streams) will be allowed.”

There is no limit to how many videos a rider can submit. The videos will be open to public voting and the 20 clips with the most votes will then be assessed by the Red Bull King of the Air judging panel. The clips will be analysed with the judging criteria as in the event: Best tricks/jumps, variety of moves and general flow.

Kiteboarders who think they have what it takes to compete with the world’s best aerialists in an extreme air contest, are invited to submit a one-minute video of their biggest airs to redbullkingoftheair.com. Entries are open to any riders, male or female, from anywhere in the world.

The deadline for submissions is 30 November 2020 with the final announcement to be made on Thursday 10 December 2020.

The event format has also been revised and updated for 2021, stay tuned to redbullkingoftheair.com for more info soon.

For more info go to redbullkingoftheair.com or some insight into what makes a good video entry, hit this.