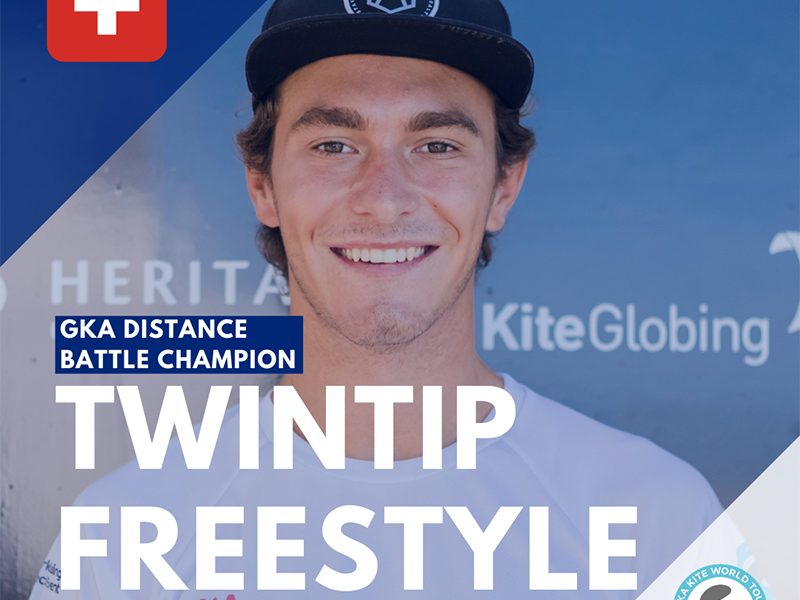 The pandemic forced sporting organisations around the world to be imaginative with their athletes and teams this year, and the GKA is no different. International travel and attending sporting events may have been on hold but the competing doesn’t have to stop.

Here at the GKA we wanted to bring the community together, and show that although there may be miles between us all right now, we’re as close as ever. The GKA Distance Battlewas the perfect competition to demonstrate just that.

The Distance Battle is an online competition, where riders pre-film their heats and submit them to the GKA. The heats were then judged and scored live by the official GKA judges in a live streamed event, hosted by our in house commentator Jo Ciastula, the first of its kind in kiteboarding.

Last night athletes were battling for a place on the podium in the Freestyle division in the mini finals and the finals. The women’s mini finals was up first, Duotone team mates Pippa Van Iersel and Paula Novotna were both competing from Greece and had great Freestyle conditions for their heats. Paula was rewarded by the judges with a score of  9.07 early in her heat with a powered Heart Attack, followed closely by a KGB. Paula took the win with 30.87 and a 20 point lead over Pippa.

In the men’s mini finals F-One team rider Liam Whaley faced the Airush rider Juan Rodriguez, competing from Cabarete. Liam opened the heat with a score 9.67 for a huge Heart Attack 7 right off the buzzer, but Juan answered back, receiving 7.63 for a powered Heart Attack. Liam who was tweaking, adding solid grabs and riding with power throughout the heat took the win with a 5 point lead and a score of 31.70.

Congratulations to both Liam Whaley and Paula Novotna for their 3rd place wins in the GKA Distance Battle. Both athletes rode hard, with power and precision throughout the event, narrowly missing out placing higher.

In the women’s final Slingshot’s Rita Arnaus struggled with poor conditions and lightwind as she faced GKA Freestyle World Champion and Duotone rider Mikaili Sol. Ritamanaged to pull out an overall score of 14.33 despite the conditions but Mikaili made the strong winds of Prea look easy throughout her heat. Stomping an impressive 9.27 score for an almost perfect Back Mobe. Mika was riding with the consistency the young woman is now known for and took the win with almost a 20 point lead and a score of 33.87.

Adeuri Corniel faced F- One rider Maxime Chabloz in the men’s finals. Maxime opened with an 8.53 score for a fast and powered Heart Attack 7 followed closely by 7.70 for an equally powered Kite Loop Front Blind Mobe. Adeuri put on a solid performance, but the Go2Kite athlete didn’t quite get the results he was hoping for, and the Swiss man took the first place with a 10 point lead and a score of 30.70.

Here’s what Adeuri had to say about the event:

I am so happy this virtual competition has finally taken place. It’s been almost a year without competing and I am very excited to be back in the game both virtually and physically! Filming was very fun and challenging at the same time. I remember we had to repeat the moves many times before we could get the perfect heat. It was a very different experience for me but I am glad I took part of it. It was very weird seeing myself compete without any kind of pressure. I am so happy to have made it all the way to the finals.

The results for the GKA Distance Battle Freestyle Finals are: 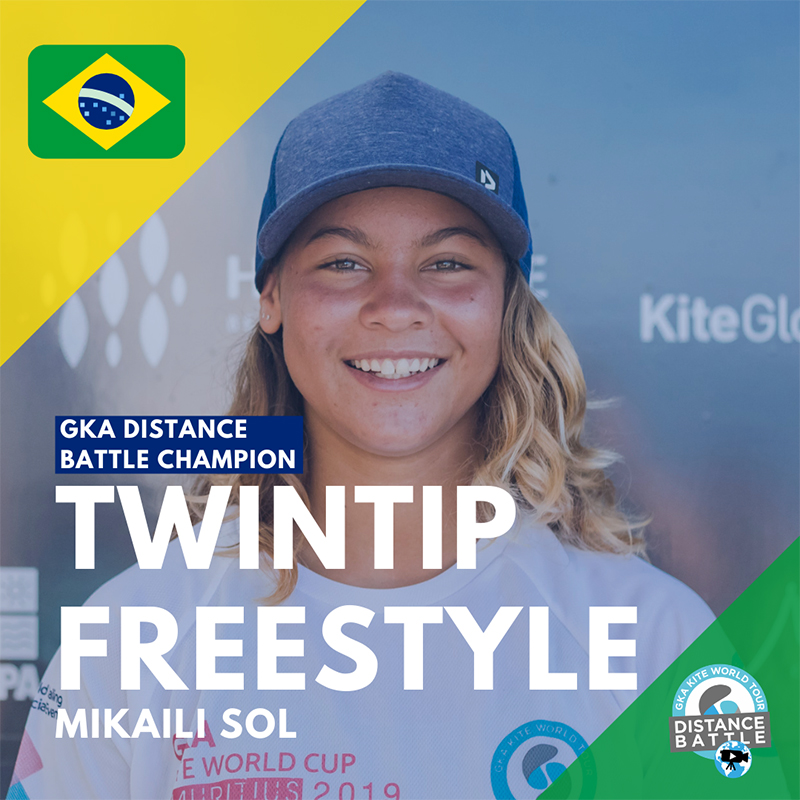 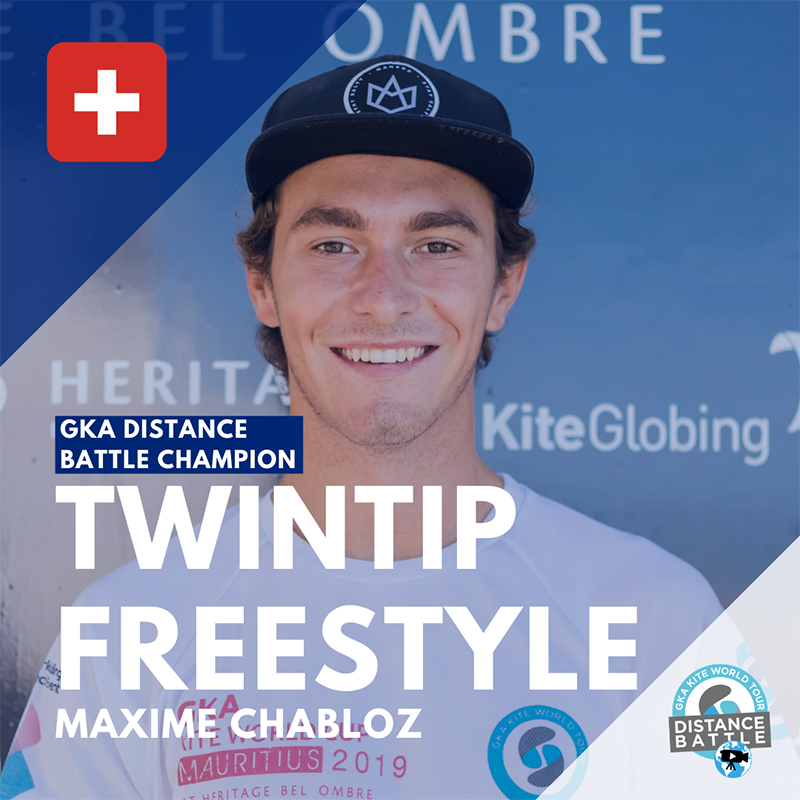 We’d like to congratulate all our freestyle riders for the performances, energy and the commitment they’ve put into the GKA Distance Battle!

Another round of applause goes out to our Strapless Freestyle Champions Capucine Dellanoy and Pedro Matos. Pedro really impressed the judges by showing great control and plenty of style throughout the Strapless event, those new Toeside Air 720’s didn’t go unnoticed! As one of the younger athletes on the tour, Capucine really is breaking the mould when it comes to Women’s Strapless Freestyle. She scored 10 points for a perfect double front roll in one of her heats.

Here’s what Capucine had to say about the event:

Participating at this competition was yes a little bit stressful but more in terms of training than in terms of filming the heat: in this online competition you’re by yourself, and you don’t know what the other riders are sending, so you do your best but never know if it would be enough. In my heats, I had a few new tricks and it was a goal to be able to land the double front roll in the heats and was very happy to do it and reach the “10 points holy grail “

I didn’t even imagine that I could be the winner of this event, I have a lot of admiration for all the girls competing…for example, Carla is the one who inspired me to practice Strapless Freestyle (some years ago, she was the only one girl in the water sending tricks in the middle of 30 guys). I‘m really happy to be a real part now of this Strapless Freestyle Girls’ community. I’m missing a lot face to face competitions but, I’m already training hardly for the next one.

All our athletes are missing the face to face aspect of competition and the tight knit community that the kiteworld is famous for. Event commentator Jo Ciastula is in the same boat with these thoughts but loved the vibe, he loved the way the GKA Distance Battlewas able to bring the community feel back even if just for one event.

With all our athletes being vocal about how much they miss face to face competing it seems like a heart time to announce that our BRAZIL EVENT IS ON! More information on this coming soon.

A big thank you to everyone involved in making this event happen, the GKA Team working behind the scenes to make the magic happen and of course to the kite brands that make all of this possible with their products keeping athletes on the water and their sponsorship keeping competing during a pandemic alive. Thank you to:

We salute you! See you on the water.