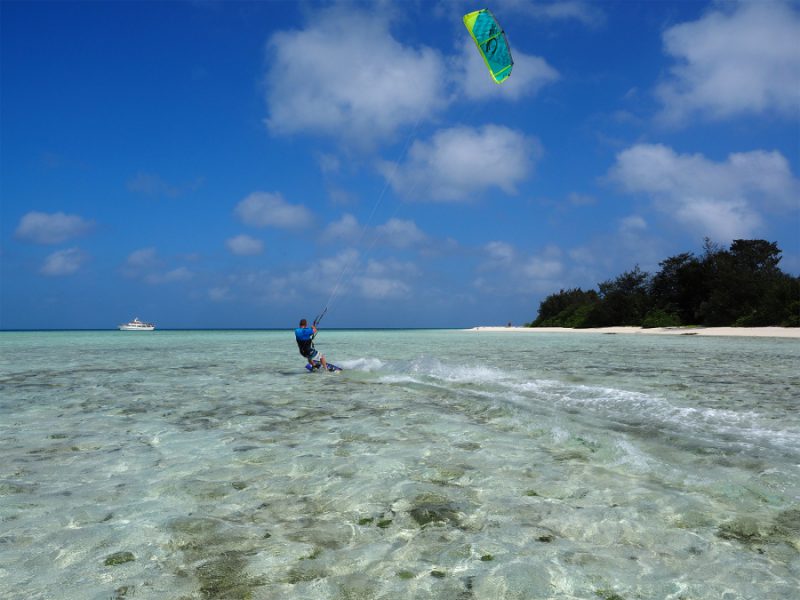 All bets are off! Papua New Guinea they said! It’d be great they said! Boy were they right! When I say they, I mean a very small group of people – this place is remote.

“If you had to rely on charts around here you would be in big trouble” said Captain Craig of his very own Golden Dawn boat, all 80 odd feet of her, 3 levels, 6 state rooms, multiple bath rooms and en suites, huge galley, lounge, dining and entertaining on the mid deck and a kick ass sun deck and main undercover outdoor living area on the top. It was here we spent most of our waking hours, if we were not kiting, diving or meeting locals on an island so far out they had not seen anyone for almost 12 months.

Imagine being completely cut off from the grid… for the locals that live out here this means primitive living, no long boats and outboard motors like you see in most inhabited tropical island nations, for these guys, it’s all hand made, carved from a tree trunk, outrigger canoes and make shift sails. With these rugged vessels the local people out here will cross small oceans in big seas, wrestle giant Marlin and Sharks, all the while keeping up a constant bailing of water that seeps in or comes over the side into the narrow main hull.

We came across one family who’d been “stuck” on the island for a few months, whereas usually a few of the young men would set sail every couple of weeks to sell “copra”, dried coconut. We later discovered that the main island they wanted to get to took us 2 days motoring so I’d hate to think what it must be like sailing one of these small vessels. After trading goods, sugar, flour from our side for fresh fruit on theirs we’d made some rapport with the family living here. They were incredibly welcoming, showing us around their huts and living quarters.

It was interesting to note that the Copra huts were bigger than the ones they lived in, water came from a small well on the middle of the island, it had about a foot of clean water in the bottom. More importantly to the people here though was getting off, they had not seen any visitors for almost a year – 10 months in the visitors book they had – and had not had a working sail for 3 months.

The sail for the outrigger had blown out a long time ago, the bottom half was sturdy and made from a blue tarpaulin, the top half of the sail was made from plastic bags in a desperate attempt to hit the water. It was not a beg but rather a plea for us to help with something for them to make a sail (they did not know we were kiteboarders), a big ask and not something you would want to commit to too hastily. Not wanting to get any hopes up I said we could not help with the sail but we could help with water and the likes.

One of our friends, Geoff, pulled me aside and was willing to give up his 2012 12m Switchblade that he’d bought brand new and flogged to death, a massive sacrifice on a trip like this and super generous. We got back to the boat and had the night to think about it, and after letting Captain Craig know of our plans and the situation he mentioned he had an old 12m dangerous thing down in the hold… perfect!

The next day we surprised the family with what must have been a lifesaver for them, pretty much an unused 12m, the best sail material they would have ever seen, no doubt. By the time we were back on board we could see the young men getting into it, cutting the panels out, ready to be stitched together. Before we left the beach that morning I asked them “how long until you sail?” to which the response was “tomorrow morning”. They weren’t kidding.

We’d been motoring for a few days now and had been blessed with amazing conditions and locations – what a place and we’d really only just got started. So remote were we now that even Captain Craig, who has been running dive charters around Papua New Guinea on the Golden Dawn for 25 years, had not even been out here before. Cpt Craig is an Aussie ex pat living in PNG… he’s also a keen kiteboarder!

The Golden Dawn chugged away around 8 knots, perfect for trawling, a few of us had bought rods especially for the trip, and this day set them on fire. We’d spent the last couple of days inside a HUGE reef system, dotted with islands and sand quays that offered up fantastic kiting, as either side of the reef narrowed in on us we had about a kilometer of deep water either side of Golden Dawn.

Heading for a narrow pass in the reef where we would hit open ocean again, our rods this morning were getting smashed… huge Baracuda, Spanish Mackerel, Giant Trevally and ferocious Jobfish (yep I’d never heard of one either) were almost becoming a pest. “FISH ON, FISH ON” would bring the luxurious appointed converted fishing boat to a stop, it was getting ridiculous, if we keep yelling “FISH ON” with every hook up we’d never get to our destination.

It was not long after sun up the decision was made that unless it was something noteworthy that stripped line from our reels and was impossible to skull drag in while the boat was moving then we had to deal with it. It became a funny competition, call “FISH ON” and stop the boat only to wind in a mino would earn you ridicule for the rest of the trip. Mind you a mino out here was anything under 5kg, a good fish in most people’s books.

But we weren’t here to fish, we were here to kite and we still had a few hours motoring before the next reef system. Passing through the reef we made our way toward group of small dotted islands, the morning sun was shining the wind was a consistent 25 knots with small rolling swells over deep deep dark blue water. In the distance, aqua blue shallower waters, pure white sand spits without even a single coconut tree growing on them. JACK POT!

Our skillfull skipper and his crew passed through the outer reef system, around a few bommies and carefully dropped the pick of the Golden Dawn in dead flat water downwind of this group of sand quays. The crew on Golden Dawn were amazing, as the anchor chain rattled off at the front the winch at the back would be dropping the tender in. We’d just finished a delicious breakfast of poached eggs and in a few minutes we were stepping into a place where quite possibly no one had ever stepped before.

“This is what it’s all about don’t you reckon Geoff?” I said as he asked for a launch, “I’m going to jump it!” he replied with a massive smile.

There were a half a dozen of these sand spits this side of the reef, dead coral, trade winds and swells pushing it all to that side of the lagoon. The water was flat as a tack on the downwind side, yet flat and beautiful enough on the inside of the lagoon that, had you been home, you would have just woken up from a dream. This was heaven for all of us. The only thing that could have topped it off would be a right hand beach break peeling off one of the bars.

We’ll keep searching for the perfect place, but right now, as an out and out experience with real exploration, quality conditions, close to perfect kiting topped off with some of the best diving, snorkelling and fishing in the world, we all put this at the top.

“What a place?!” I kept on saying… the whole entire trip!