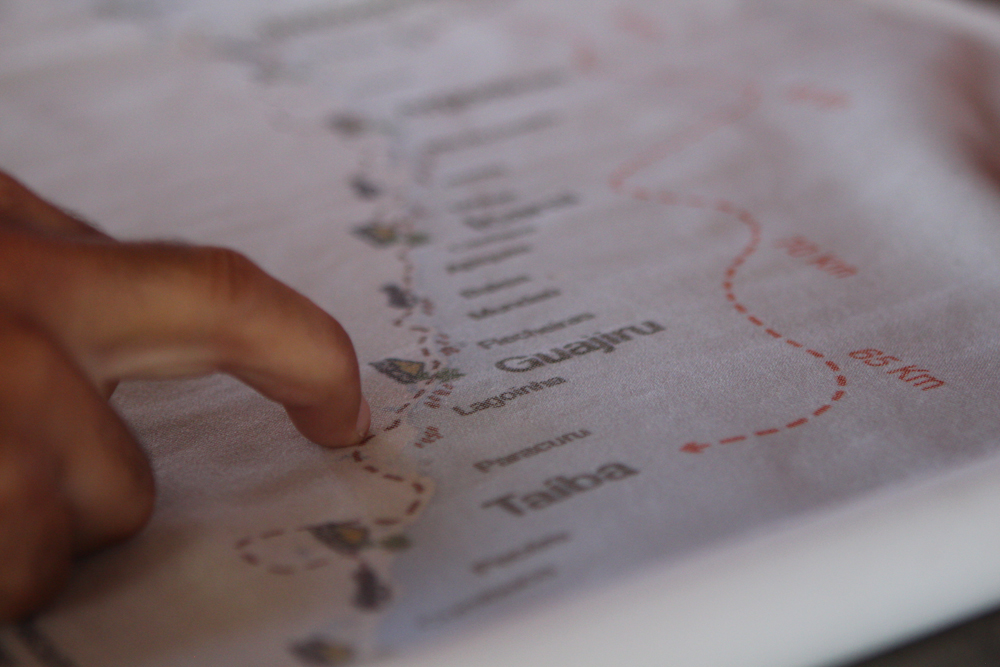 It’s 1am. Our 2nd pro Sebastian Ribeiro (fresh off his victory at the Brazilian University Surf League championships) rolls into my room, exhausted from a weekend of competition. We exchange pleasantries and both collapse into our pillows.

In Brazil the sun rises at 5am, 4 hours before our rider meeting, and I was already awake with giddiness of anticipation for our upcoming day. Finally at 8am Sebastian and I roll out of our beds, and make our way to the breakfast room. Seems we aren’t the only ones excited for the day. In fact, we’re the last ones to arrive.

A quick scarfing down of a few eggs and a pile of fresh tropical fruit, and it’s time to hear about our upcoming adventure. We gather at the beach bar around our guide from Surfin Sem Fim – the consummate gentleman Wanderson. We crowd around his detailed map of the Brazilian coastline to scope out our upcoming route. He explains in detail all the obstacles, highlights and towns we’ll be passing along the way. The list is long. 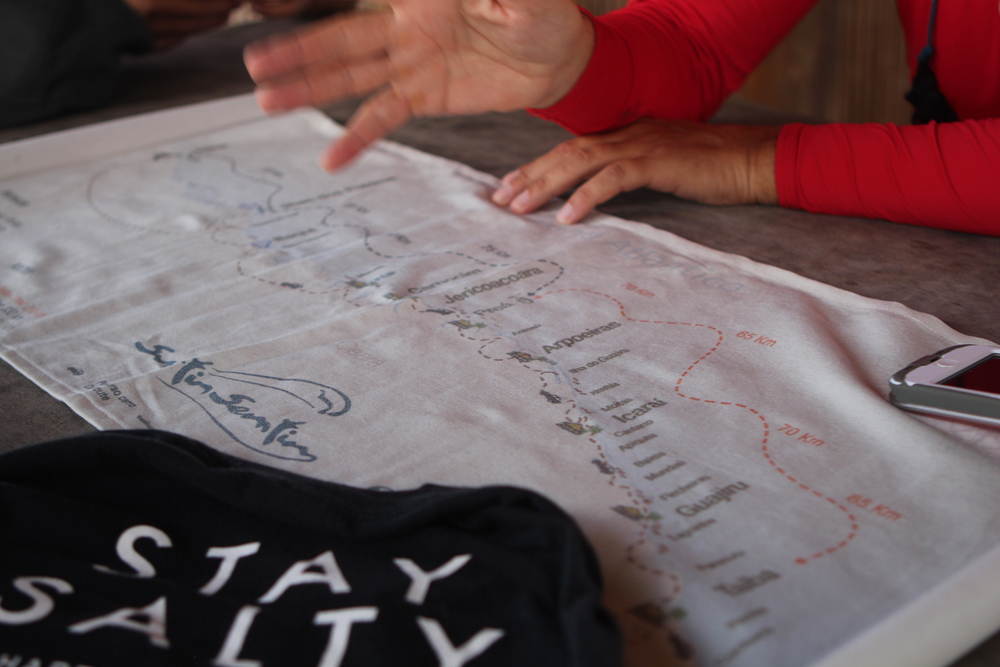 We break from our meeting only to rejoin on the beach 30 minutes later, gear in hand, ready for action. A quick headcount, a final gear check, and like a prom dress on prom night, we’re off! The waves at the starting point in Taiba are breaking overhead, and the current is vicious. Nothing like a challenge right out of the gate! After a quick initiation, everyone settles into their wave riding groove. Waves are being slashed, smashed and beaten like rented mules. Sprays of salty water are being thrown violently into the air as cutback after cutback are ripping the tops of waves apart. 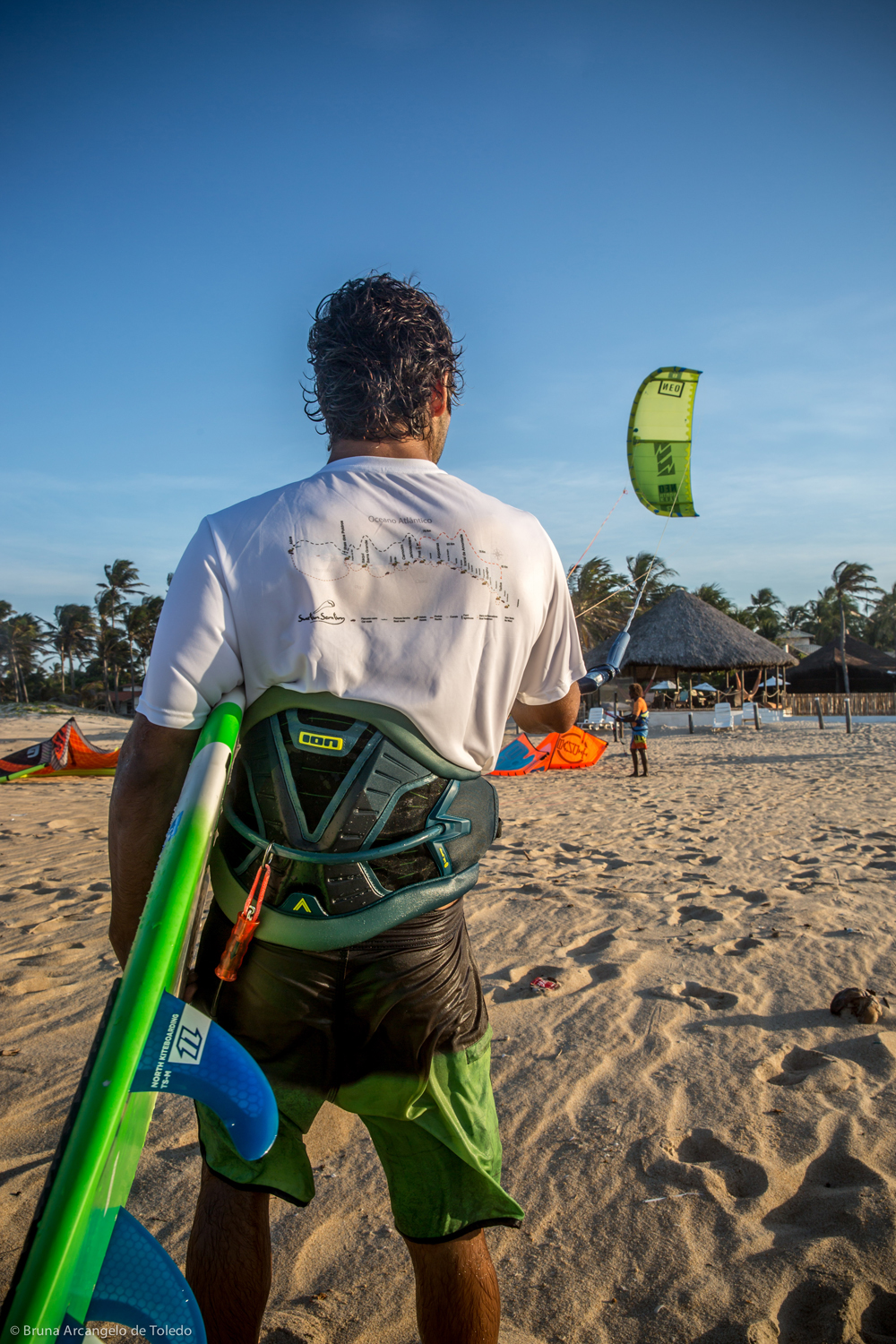 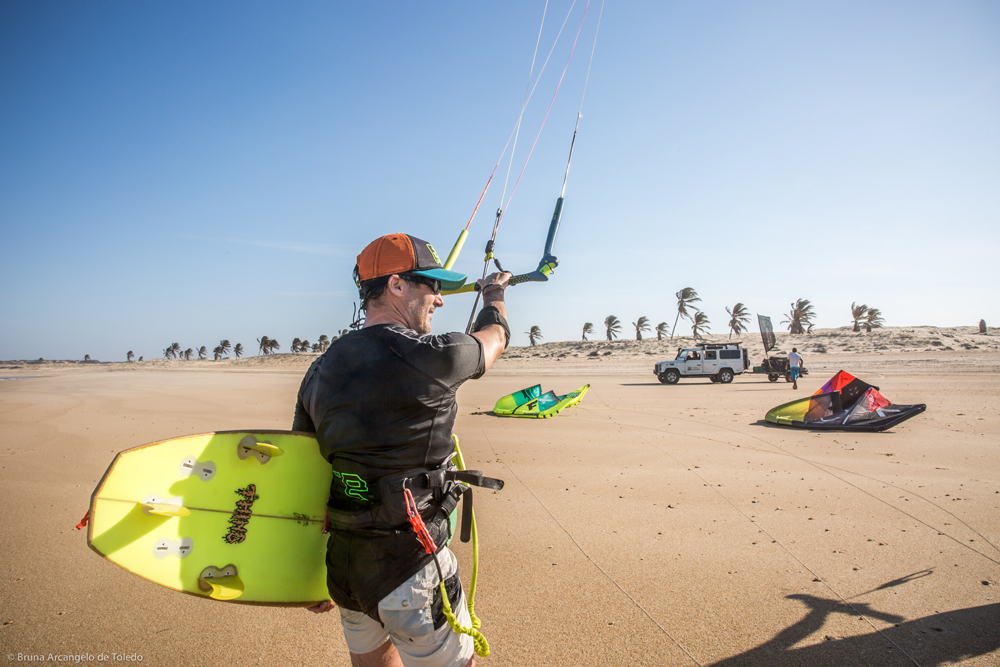 Toe side, heelside, repeat. Almost like a broken record stuck on the same loop. But this is a song that I’ll never tire of listening to. We fly like eagles across the coast. Passing small little fishing villages one after the next. As we pass, other kiters recognize Mitu and ride out to greet him like the Pope coming to town. It’s like kitesurfing with royalty. The waves are endless, as are our shit-eating grins that stretch from ear to ear. Mitu and Sebastian are the consummate pros; guiding, coaching, and blowing our minds with their unbelievable athletic talents. They boost massive airs effortlessly like they are riding invisible elevators that levitate them into the heavens. It’s like watching angels fly. Or in this case maybe ‘like Gods' is a better analogy. Kitesurf Gods. 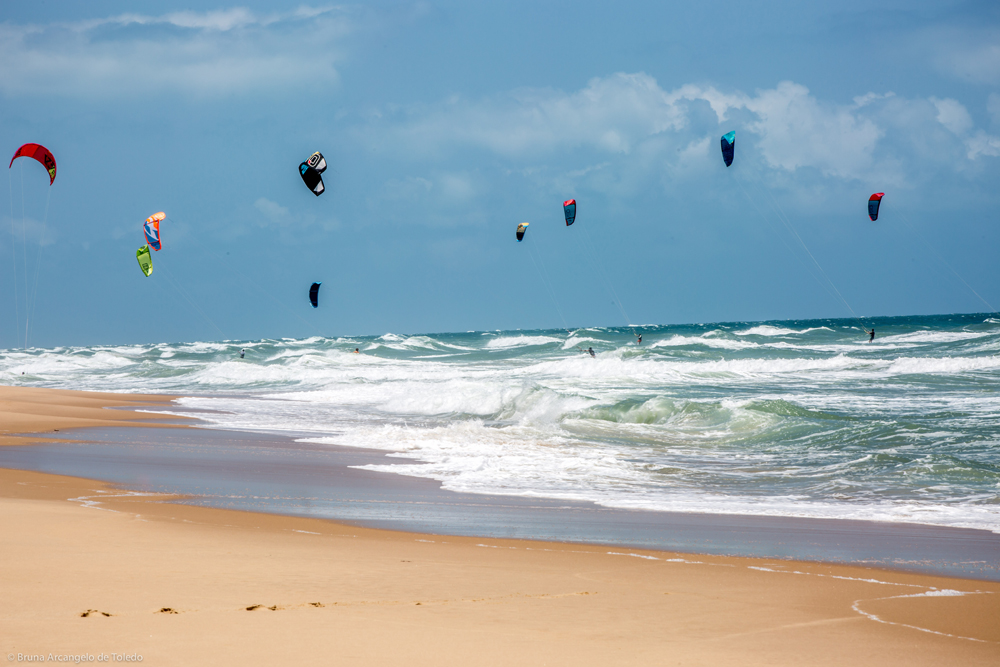 Other than the occasional fishing villages that dot the coastline, we are alone. The coast is spectacular. Beautiful white sand beach for as far as the eye can see, with endless waves breaking the whole way. As we round the point, we see a massive perfect white sand dune towering into the sky like a NYC skyscraper; but with a million times the beauty that any man could ever build. Nature’s majesty proudly on display, and we all took note.

We also took note of our new friends who joined us intermittently for part of our voyage. Hello Mr turtle. Hola señior trumpet fish. Hello large dorsal fin… Wait, large dorsal fin?! Crap! Shark!? Nope. A school of dolphins curious as to who is party crashing their home surf break. And like any local, they quickly show us the right way to surf these epic waves. For a moment, time stood still. With muscle coordination I could only wish to have, the pod ripped and slashed overhead waves like Kelly Slater winning another world championship title. As quickly as they appeared, they disappeared into the surf waiting for the next group of kiters to come along to show them what real surfing looks like. 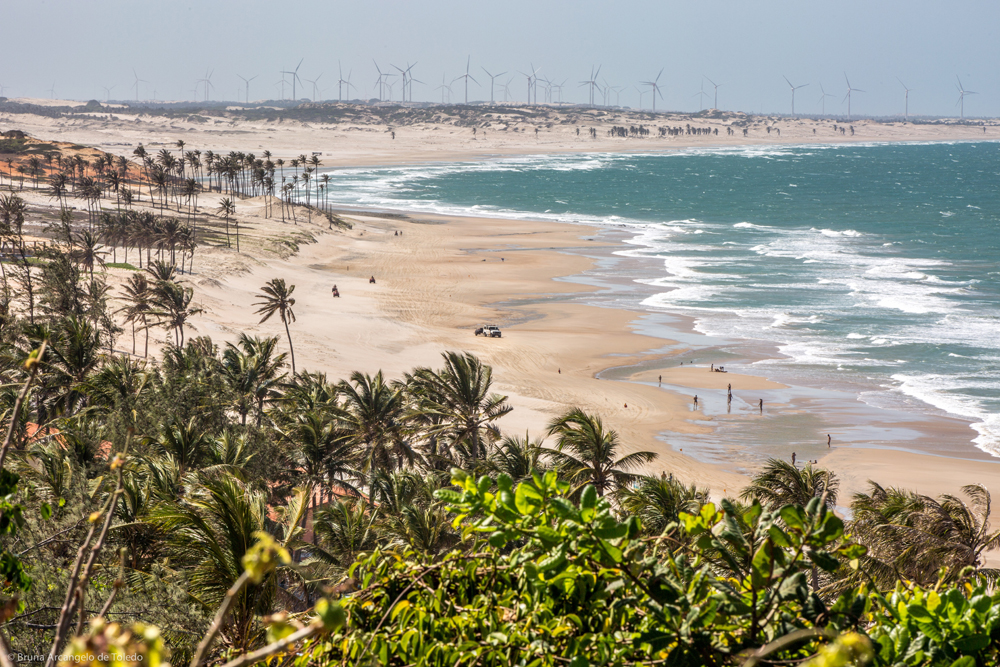 After a quick 35km’s, we pull into Paracuru where our Surfin Sem Fim Landrover is waiting for us on the beach. We land our kites, and all run to the cooler for much needed refueling. Fresh fruit, beverages, sandwiches, nuts and so much more are shoveled down like we were sailors lost at sea and hadn’t seen real food in months. Everyone cannot stop talking about how amazing the day has been so far. And we’re only half way through this leg of the day, and only 35km’s into our 500+km expedition; 6 days away from our final destination in Ilha dos Poldros. What more awaits, we can only dream. 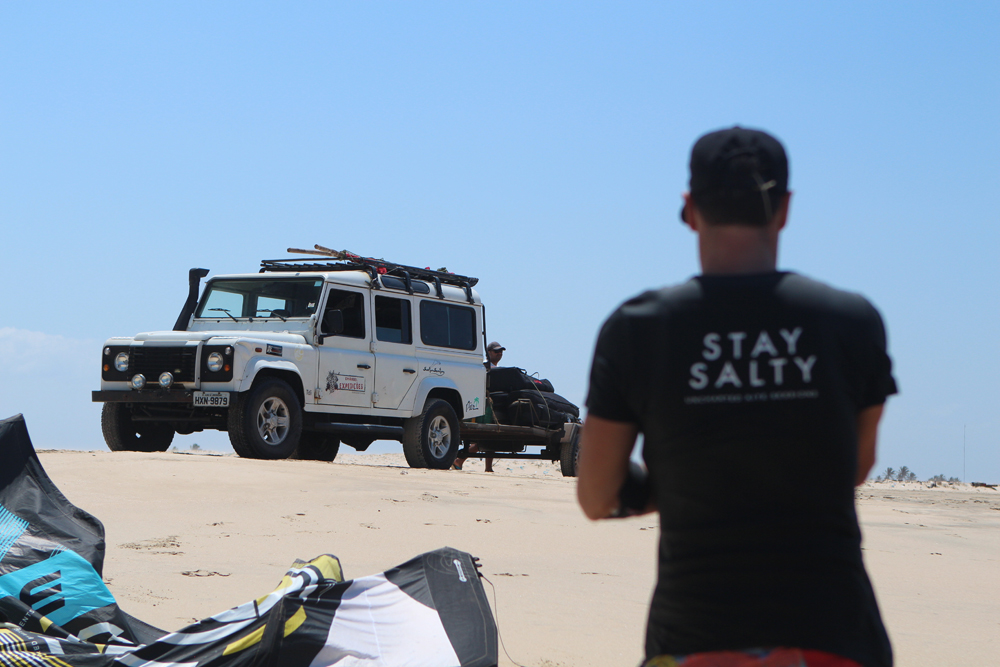 After our meal, Mitu, Sebastian and myself give coaching feedback to the other riders. Small, little corrections on stance, board and kite position. Everyone listens intently, as they are all eager to learn more so that hopefully one day they can crush waves like Mitu & Seb. Notes taken, we relaunch and begin the second half of our day. And it’s more of the same. Waves, waves and more waves, until we hit a small sand sheltered flat water inlet. Flat water and 25+ knots equal a whole lot of strapless freestyle madness by Seb and Mitu. It’s our own private clinic on how to boost with no straps, and do it with style. 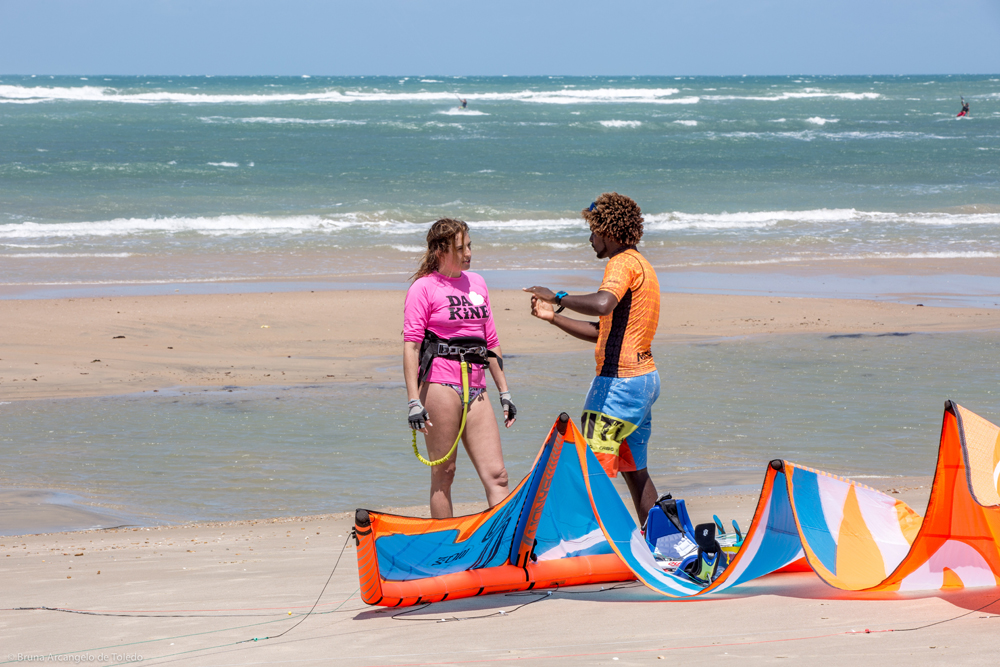 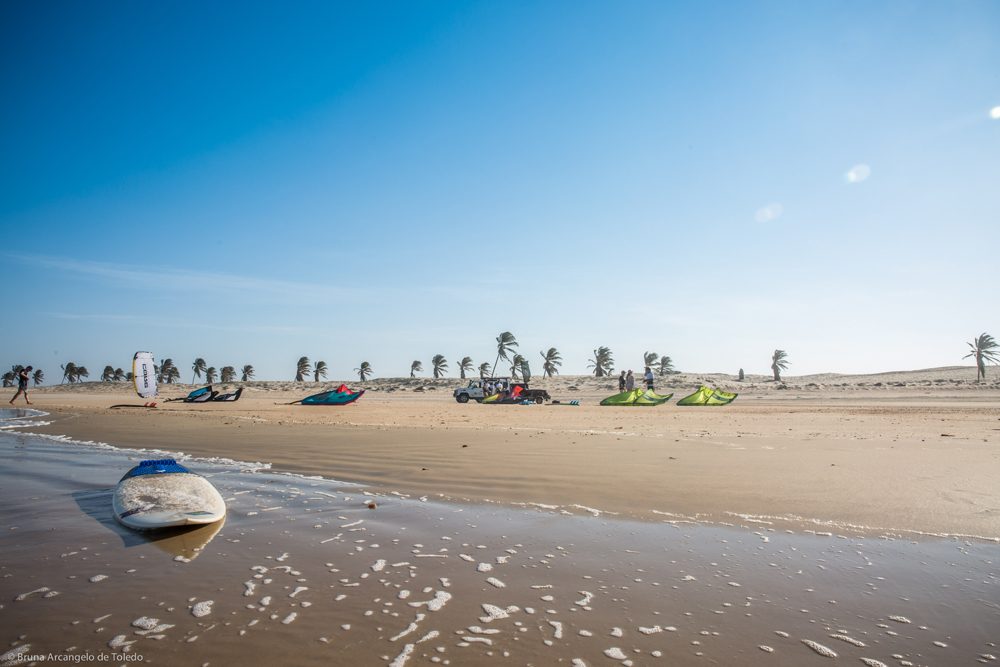 “Did you see that?” proclaims Justin as he watches Mitu effortlessly throw down a flat 360 front roll, with a shove-it 360 of his board at the end, just for fun. Yes. Yes I did see it, and BOOM went my brain. How do you fly and spin so effortlessly and still land with such control? Instantly any ego I had about my kite skills quickly vanished as I witnessed what only Mitu and a hand full of pro kiters in the world can do with a kite and a board. As Wayne & Garth once said, ‘we are not worthy’, and we bowed to true talent. 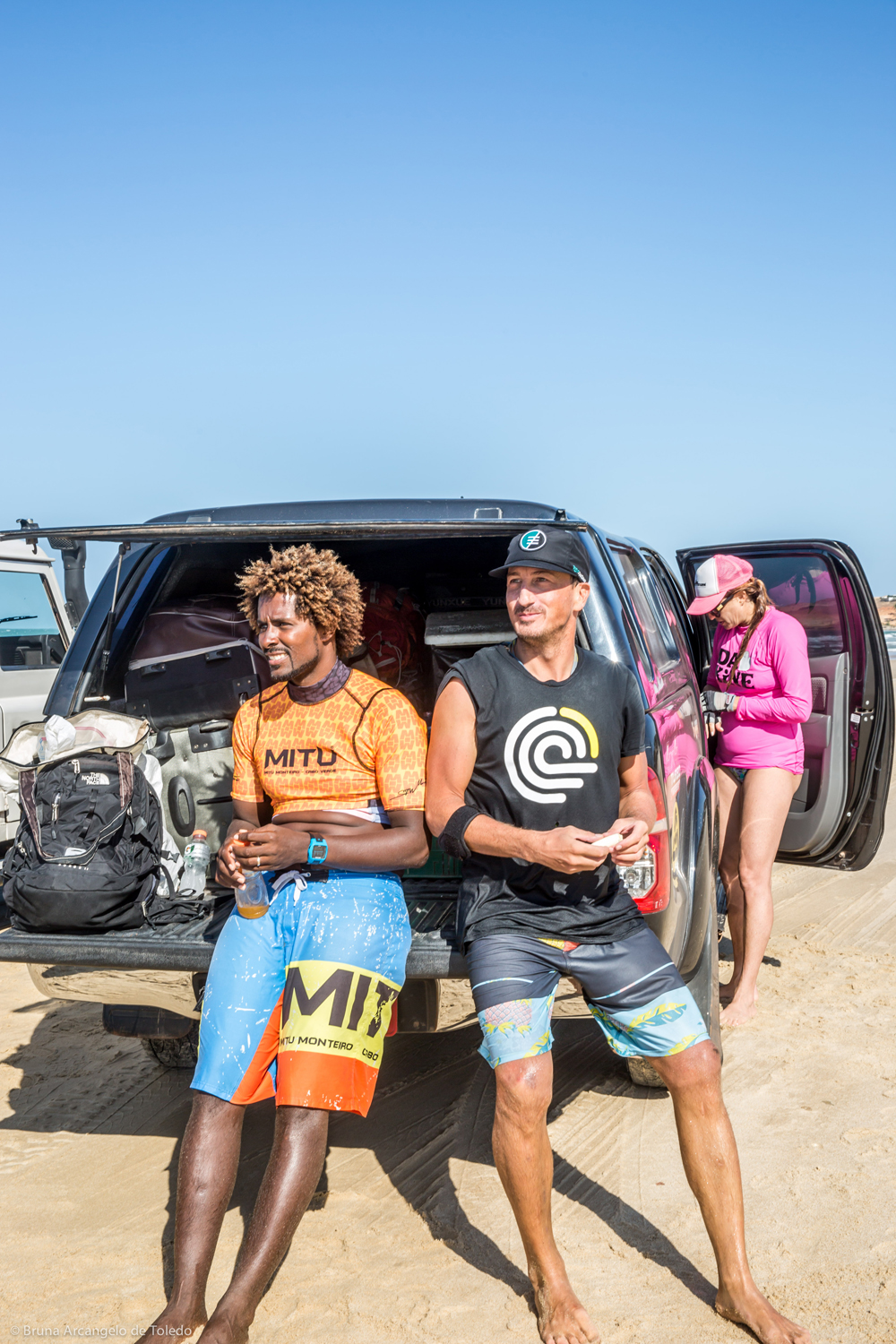 But time waits for no man, and we must push on to get to our pousada before the suns tucks itself into bed for the night. We run the coastline like gazelles crossing the African plains, smooth and quickly. Our violent wave smashing has tapered off a little as we now cross hour 4 of our voyage. For most of us, 65kms of downwind riding is the longest down wind ride we’ve ever done, and our slip is starting to show. 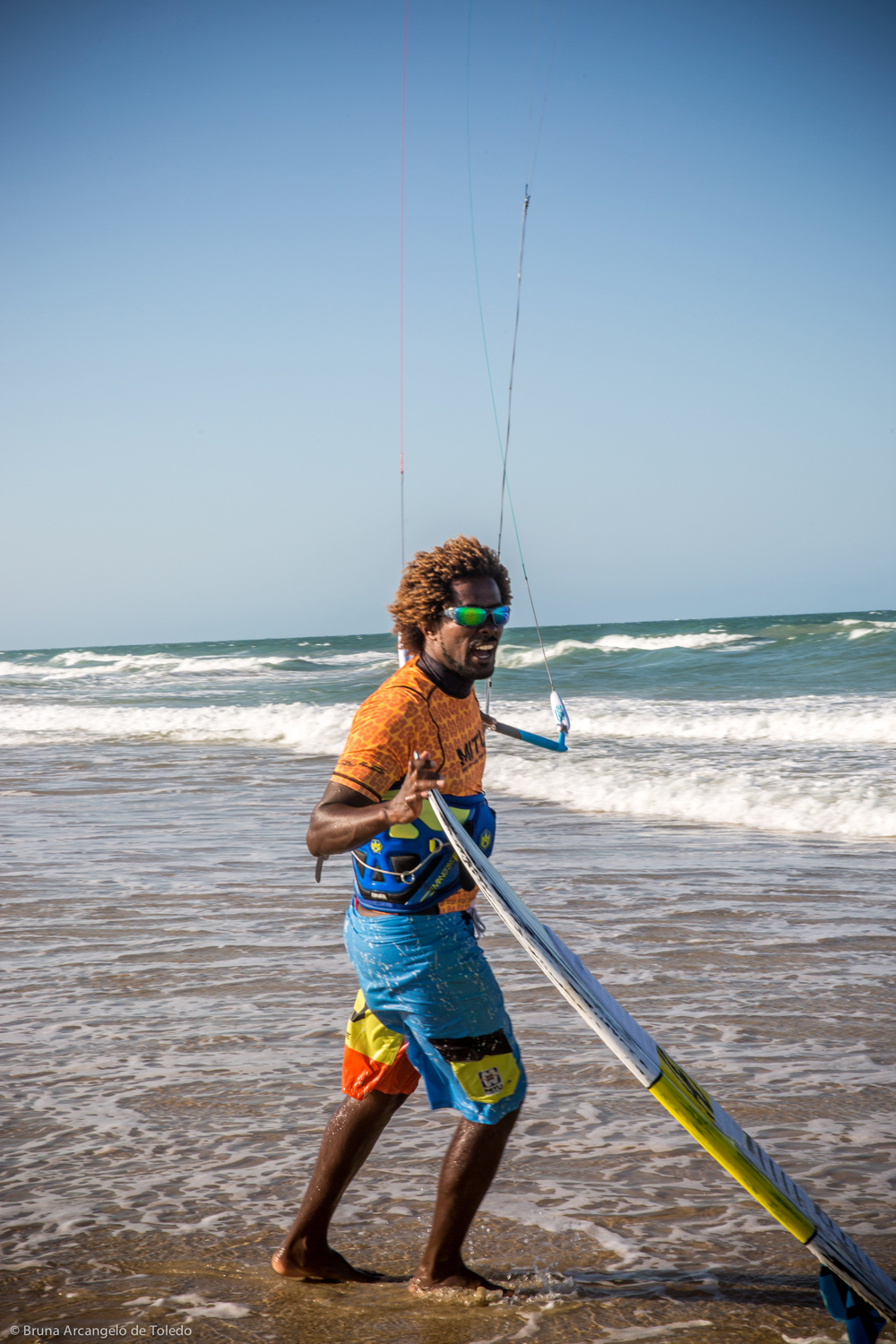 Not a moment too soon, we arrive at our pousada for the night, Vila Vagalume in the small town of Guajirú. Our beautiful oasis tucked into the dunes. We land our kites, walk through the back entrance off the beach, and promptly fall into the swimming pool; harness, clothes and all. Wow, what an effort. We laugh and tell stories of the amazing day and all the waves we left crushed in our wake. 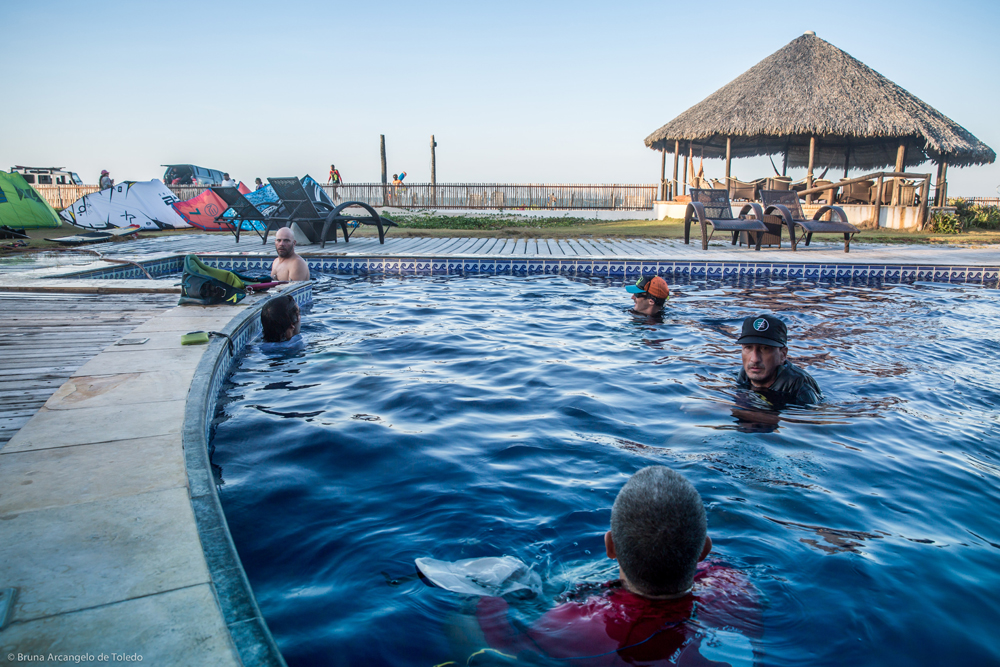 Still in the pool, the bar staff swing by with a tray full of caipirinhas ready for our consumption. Cold and refreshing, they go down faster than they were poured. With the 2nd round of cocktails arrive a small selection of appetizers. Calamari rings, seared beef, yucca fries, and more beverages. Like the drinks, the food disappears in a flash. One had to be careful not to lose a hand in the feeding frenzy. Like great white sharks we devour our snacks like baby seals, and all are hungry for more. Dinner can’t come soon enough.
Showers, water, and, for a select few, a quick massage, and we are off to dinner. Damn! More fresh delicious fish and seafood?? Ok, if I must. I guess if someone has to be treated like a king, it might as well be me. The sacrifices I make… 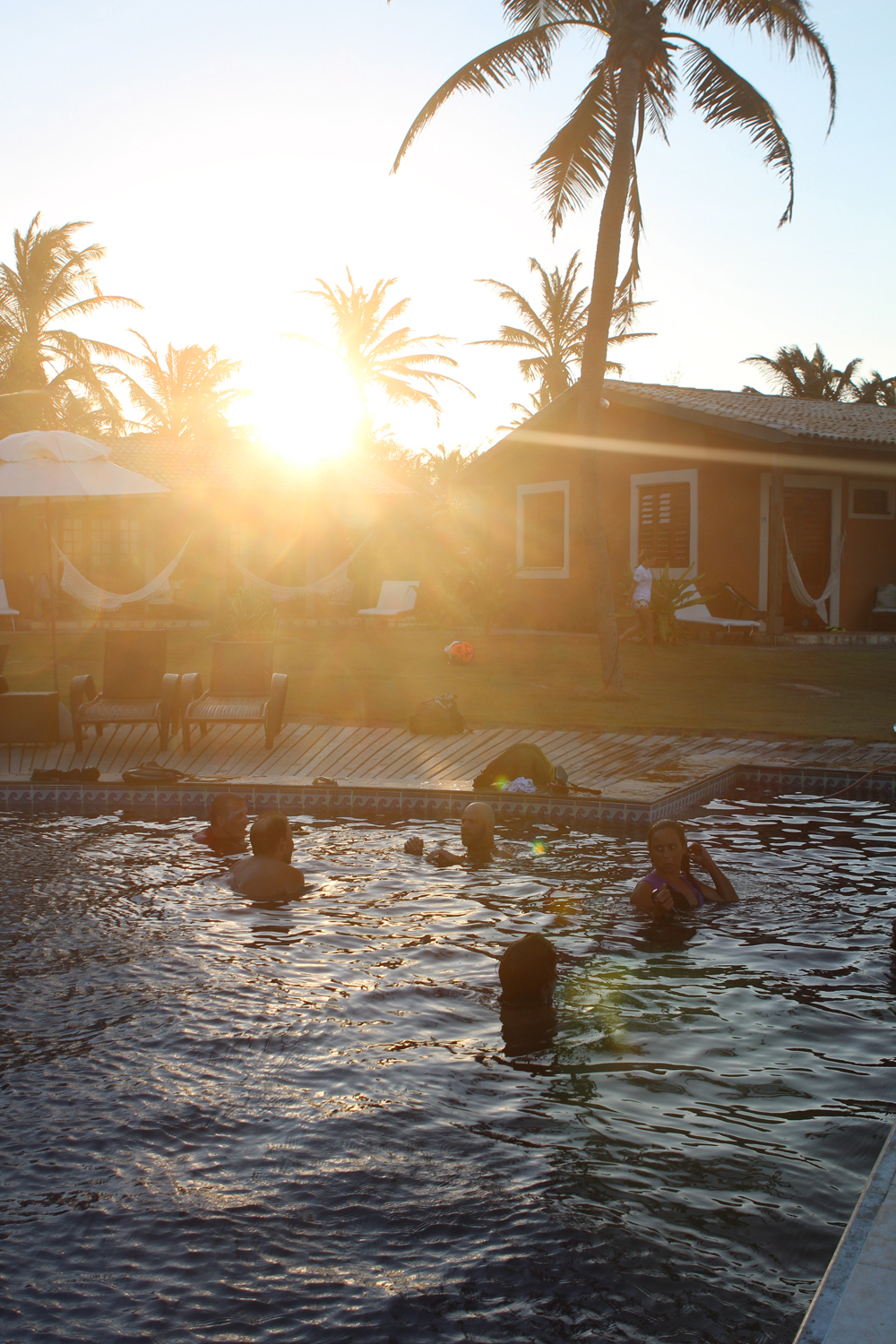 Red eyes and sore muscles read through everyone’s body language like writing on the wall. Exhausted, it’s obvious we are all about to collapse from our valiant effort. A few more stories, and we slowly start to disperse into our small cabañas, sinking into our soft pillows as if they were lovers we hadn’t seen in far too long. I hear my pillow calling my name now. Time to count dolphins playing in waves in my dreams… 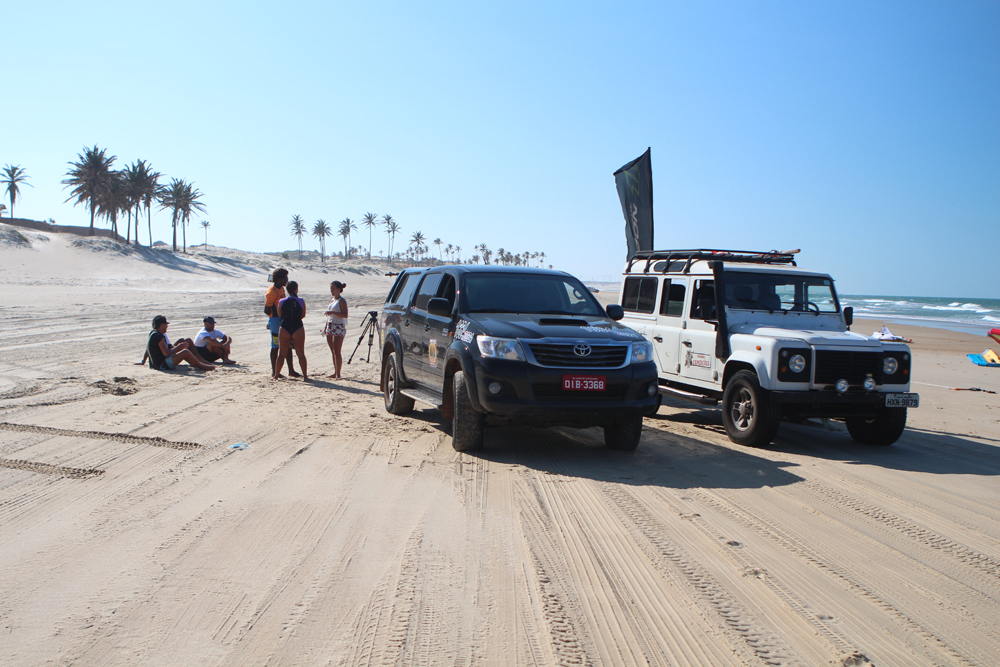