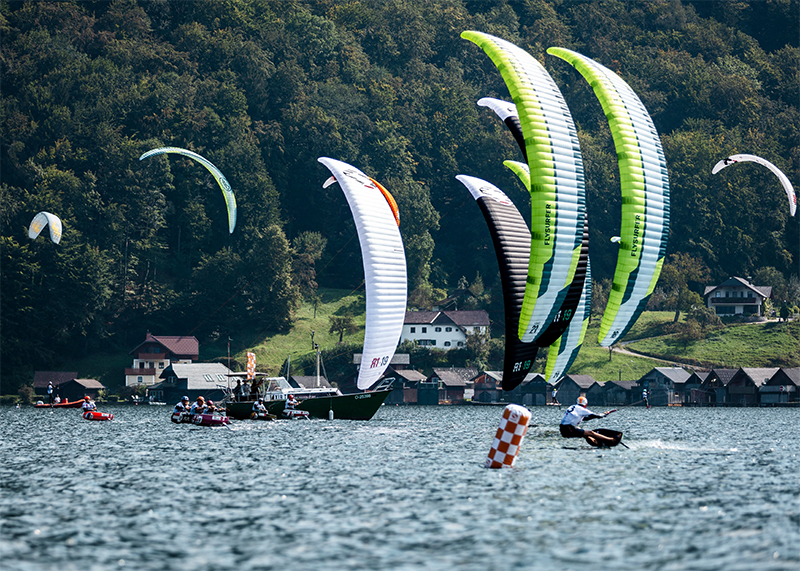 Racing got off to a slow start of the UPPER AUSTRIA KiteFoil Grand Prix Traunsee 2020 on Day 1 as competitors were postponed onshore waiting for the thermal wind to build. Lake locals suggest that the optimum window for racing occurs between 1100 and 1600 each day, and that the standard tactic is to “…head toward the left side until you can scratch the [western] mountain, and when you tack you will be lifted all the way up.”

At the end of the day, the German and the British team take the lead tied at 2 points.

Competitors soaked in the gorgeous views and unseasonable sunshine until the postponement was removed at 1310, where they launched into action. The qualifying series sees the 19 teams split into three fleets, with the YELLOW fleet of seven racing first, followed by BLUE and RED fleets, each consisting of six teams.

Although the number of entries is only half the expected number due to the travel restrictions of the worldwide pandemic, the teams present are the best in the world, promising exciting action over the coming days. 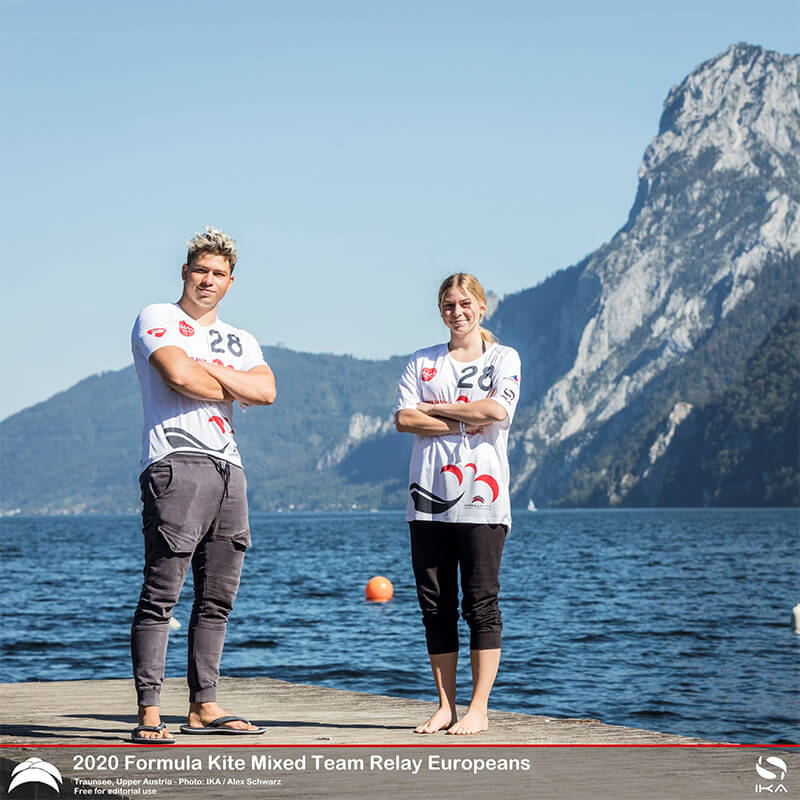 As one of the first classes in the world to resume proper racing, many eyes are on the organisers of this event, a responsibility that has not been taken lightly. Appropriate safety precautions have been implemented, such as all technical meetings being held online in order to avoid large crowds of people. The organisers aim to prove that with careful management and cooperation, fair and competitive racing can go ahead, a move which is critical for a class that has recently been selected for the Paris 2024 Olympics.

The YELLOW fleet featured the brother-sister combination of MARINA VODISEK (SLO) and TONI VODISEK (SLO). With their father appointed head coach, this true family affair are eager to perform at this event. Coming back from a shoulder injury and currently ranked #2 in the world, TONI felt lucky to have his sister competing alongside, although there is still work to do, stating that “…half the team is already there, now we just have to bring the other half up…working with family has both good and bad sides…it is going to be a little bit tricky, but I accept the challenge.”

In her first ever interview, world #21 MARINA agreed that there were challenges to overcome, but one of the strengths they have is that as family members, the foundation for communication is much stronger within team: “If it were someone other than my brother, maybe we wouldn’t fight as much, but on the other hand, I maybe couldn’t say words to them that I can say to my brother…and we know each other so well that it is really good to be a team together”

With 8 knots on the course, the racing was tight, TONI in 2nd place after Lap 1, and with a good changeover, MARINA sailed well to move up to 1st position by the top mark, chased hard by world #5 KATIE DABSON (GBR) in 2nd place. 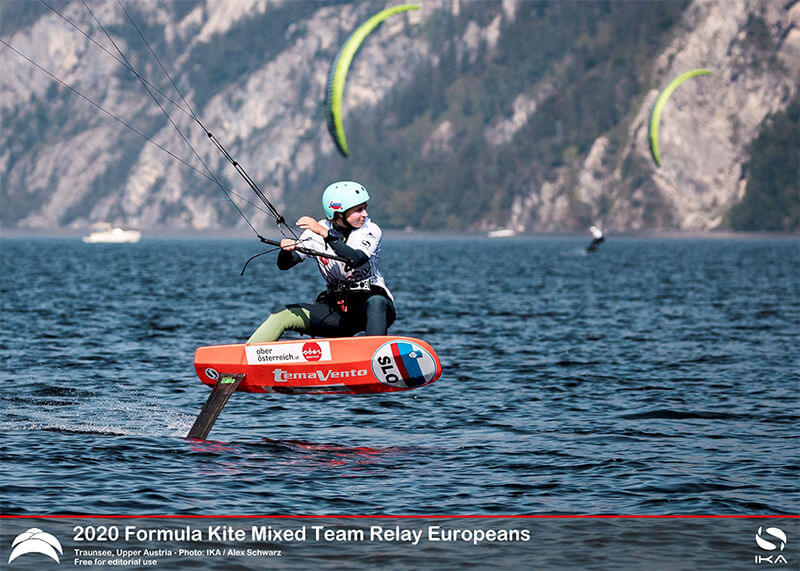 “I was really looking at the wind at the top, that’s why I went further on the left when she [DABSON] tacked earlier,” said MARINA when asked how she managed to move up into the lead, evidently taking advantage of the local conditions that the Ebensee regulars mentioned.

MARINA looked to have it in the bag until she rounded the final mark and headed very low, below the layline to the finish, leaving a large gap to windward.

“I just went full send…high and fast. MARINA looked a little bit overpowered and I don’t think she could hold her edge too well” said DABSON, who saw the opportunity and sailed a tight line to the finish, overtaking MARINA to secure the win.

Said MARINA, “I got really confused because for me it was really stressful as I am so new at this, I was really doubting myself. I saw [multiple] boats with flags ahead of me and I didn’t know if it was up or down, I just didn’t know which boat to aim for.”

As the breeze began to lighten ahead of schedule, Race 1 for RED fleet did not go as planned for hot favourites CONNOR BAINBRIDGE (GBR) and ELLIE ALDRIDGE (GBR). It seems that the local knowledge is not always a guarantee; “A little bit disappointed, it is pretty light out there. I got pinned out on the left hand side in a light spot.” said CONNOR immediately after finishing his lap in 4th.

Teammate ELLIE suffered in her lap as well, saying; “There wasn’t much wind at the top mark, and I was just laying the mark but then two people tacked on top of me and there was another girl in the water just below the layline, so I had to double tack and I didn’t make the second one so I was in the water trying to get it up for a bit. The top mark is a bit of a trap really. You have to overlay so much that there is no option of underlaying,”

With two races for each of the three fleets in the books, kites began dropping from the sky and the postponement was raised again at 1430.

The wind stayed below the required margin at 4-5 knots for the rest of the day, and the fleet was released at 1530.

Racing continues with the opening series through to Saturday, and the semi-finals and medal series scheduled for “Super Sunday”. 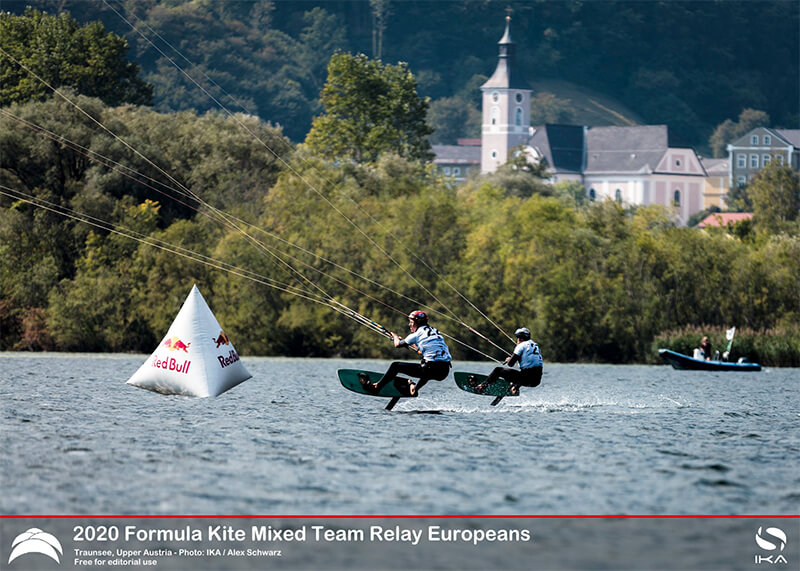