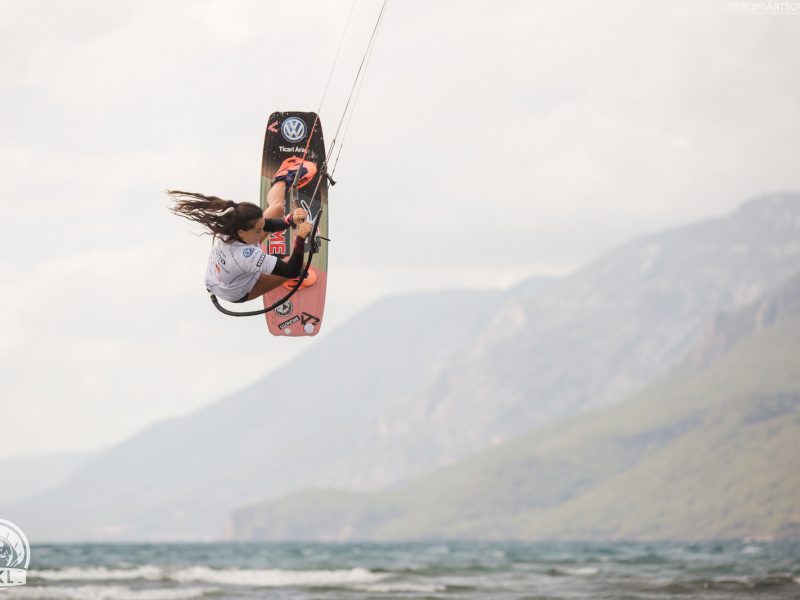 The final day of the Amarok Kiteboarding World Cup was a race against time to complete the competition. We were blessed with incredible wind from 1pm through until sunset, and managed to complete the full ladder for the Women, and reached the second semi-final for the men.

It was a rainy start throughout the morning, but at midday the sunshine came out and the wind started to blow, just as was predicted.

The Women’s Round 1 and 2 were first to be completed, with the 6 finalist athletes being Hannah Whiteley, Francesca Bagnoli, Paula Novotna, Rita Arnaus, Annabel Van Westerop and Bruna Kajiya. The wind conditions were ideal as we headed into the start of the final. Hannah Whiteley had a hard start with two crashes, but she made up for it with an impressive Back Mobe scoring 8.03, but unfortunately it wasn’t enough to gain her a podium position. Francesca Bagnoli from Italy landed 5 good scoring tricks, but the level in the final was high, so she remained in 5th position. Paula Novotna from the Czech Republic continued in the finals with her powerful riding, and fought hard for a podium position, landing a powered Heart Attack, but her last two trick attempts were crashes and it cost her dearly, leaving her just one spot short of the podium.

The tension was high for Annabel Van Westerop who was fighting hard for the 2nd position. She went for a huge Heart Attack on her last trick attempt, fully focused on her objective, landing powered and ending up on the beach. Unfortunately her efforts came slightly short, and she took 3rd place at the event, happy to have gained a podium finish in this very competitive final.

Rita Arnaus from Spain was on fire from the very start of the final, she was focused and determined. She stomped her tricks, and impressed all the spectators with an incredibly powered Heart Attack that scored her 8.33. All of her efforts were rewarded when she landed her kite back on the beach and was shocked to discover she had finished in 2nd position! Needless to say that the young Spanish rider was more than delighted with this incredible result for herself in Akyaka. Bruna Kajiya, the reigning World Champion put on a display of riding that amazed the crowds and judges alike. Showing how comfortable and happy she was riding at this event in Turkey, she landed almost every trick attempt, going bigger and better each time, even doing an impressive Slim Chance and then catapulting her herself on to the beach as she had so much speed on her landing, much to the delight of the fans on the beach and followers of the live stream. Bruna once again takes the win for the Women here in Akyaka, making it her 2nd win of the year and putting her in a solid 1st position for this year’s rankings.

Once the Women’s competition was completed, we returned to the Men in an effort to also finish the full event ladder. Round 2 was fully completed, as well as Heat 7 of Round 3, but unfortunately the sun went down and the race director called to abandon Heat 8 as light was no longer suitable. A disappointment for the men, however there were some amazing moments during those heats and some standout performances were seen. Set Teixeira from Brasil was in fine form during the competition and threw a huge Backside 317during his semi-final. He maintained those high scores throughout, and secured himself a place in the final that was unfortunately not able to be run. French athlete Arthur Guillebert and Spanish/Belgium rider Jerome Cloetens were also both set to join him. Posito Martinez from the Dominican Republic had been riding hard all day alongside his fellow countryman Luis Alberto Cruz, but he unfortunately injured himself in Heat 7, and was unable to complete the heat.

The result therefore for the Men leads to a draw for the 12 Semi-finalists:

The WKL were delighted to be in Akyaka for this stop of the World Tour. An amazing location for kiteboarding, beautiful culture and friendly people, we are all looking forward to returning to this location for 2018.

The live-stream was running throughout  the 4 days, following all the action, and the viewers were higher than ever, registering over 150,000 unique viewers throughout the event. Thanks to everyone who tuned in and participated in the conversation.

We would like to thank all of the event sponsors for hosting the Amarok Kiteboarding World Cup.

Extra images from the event can be viewed here.

We remind you that the next stop for the WKL with be in El Gouna, Egypt, in November. We look forward to seeing you there!