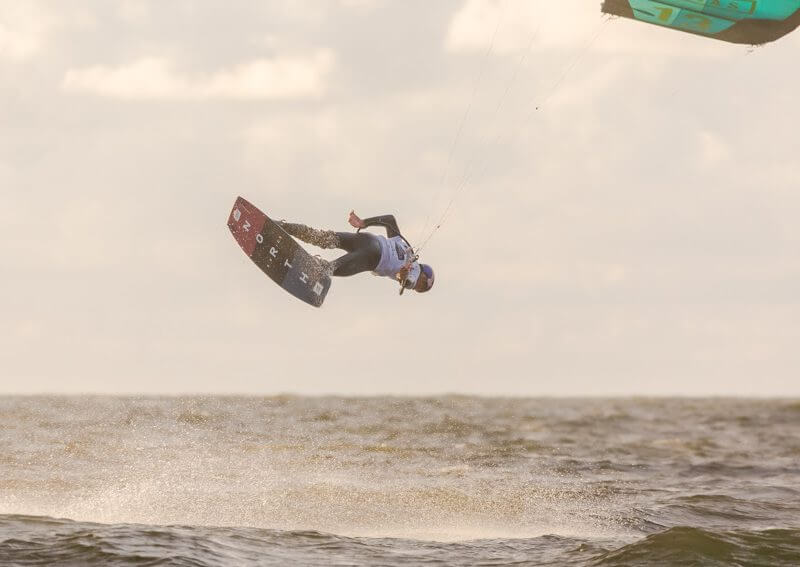 An early skipper’s meeting was called for Day 2 of the Qualifier League event, with the intention of starting the competition as early as possible, with the light conditions that were forecasted.

The winds on the island of Texel continued to tease the riders and organisation throughout the day, with several moments where it looked like it was about to fill in. Several riders headed out to test the conditions, but it dropped again before there was a chance to commence competition. Finally at 6pm, the wind picked up and the Qualifier Event began, with Men’s heats 1 and 2 completed.

Men’s Heat 1 saw Russian rider Sergey Borisov get off to a strong start, landing every single trick throughout his heat and giving him the win. His experience and confidence was visible from the first moment. Young Mexican rider Anthar Racca came in second, landing three solid tricks including a nice double heart-attack. He will be joining Borisov in Round 3.

It was Tom Bridge from the UK who lead the way through Heat 2, landing a nice Back Mobe 5 and Front Blind Mobe, riding consistently well throughout his heat. He was delighted to be passing through to Round 3 directly. Rens Van Der Schoot from the Netherlands and Dominican rider Joselito del Rosario had a tight battle for second place, with Rens staking his claim right at the last moment, allowing him through to Round 3 together with Bridge.

With a more optimistic forecast for the coming days, the Skippers meeting has been called for 7.30 am tomorrow with a fist possible start at 8am if the conditions allow. Tomorrow will be the final day for the Qualifier League event.

Tune in tomorrow to follow the action from Texel!