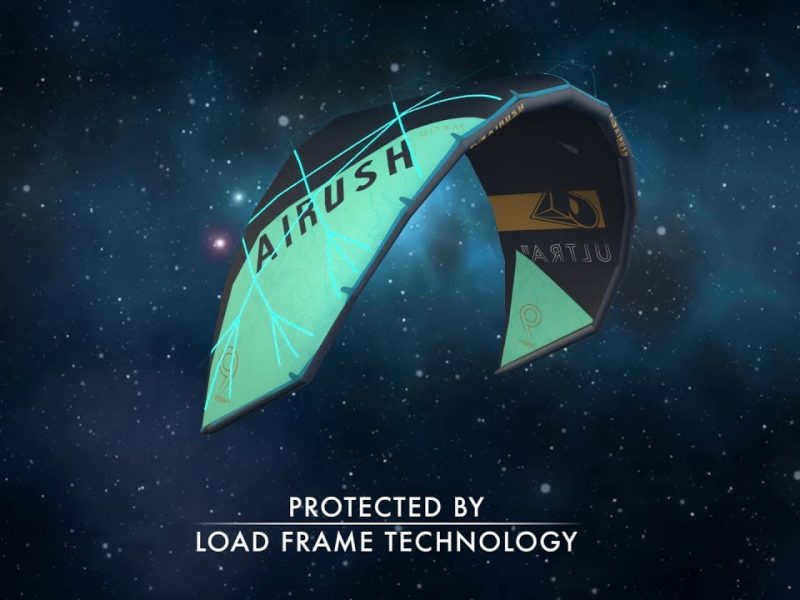 Focusing on the details, Airush kiteboarding help us understand the canopy and load frame of the kite.

Understanding that the canopy and its seams are the most fragile part of the kite, we developed the Load Frame to fundamentally change this by removing as much of the structural load off of the canopy cloth and transferring this into the kite.

Looking at the Load Frame, what we do believe in is good old structural support. Canopy cloth is not good under shock loading (traditionally kites might split when you crash them) and not as good under bias tension (Loads at 45 degrees). It is also not good under extended tension; it has limited memory so you want to avoid overloading it.

Central to the concept of the Load Frame are the lightweight Ultra High Modulus yarns, of which each single yarn can carry 40kg. Think of them as a lightweight web with engineered energy absorption under load, similar to a spider web.

These yarns are integrated into the canopy through reinforced taping that allows them to elongate when under extreme load, absorbing most of the shock that traditionally would have run through the canopy. At the same time, they carry the primary load of the canopy, preventing stretch and increasing long-term performance.

By expanding our exclusive Load Frame with WebTech throughout the areas normally occupied by Dacron, we are able to minimize or completely remove the heavier fabric and utilize the Ballistic high-modulus polyethylene web fibers instead – increasing strength and minimizing weight.

The Airush Load Frame featuring WebTech has been the key to setting the ultimate benchmark in durability, without compromising on weight.

Watch the video to understand more!