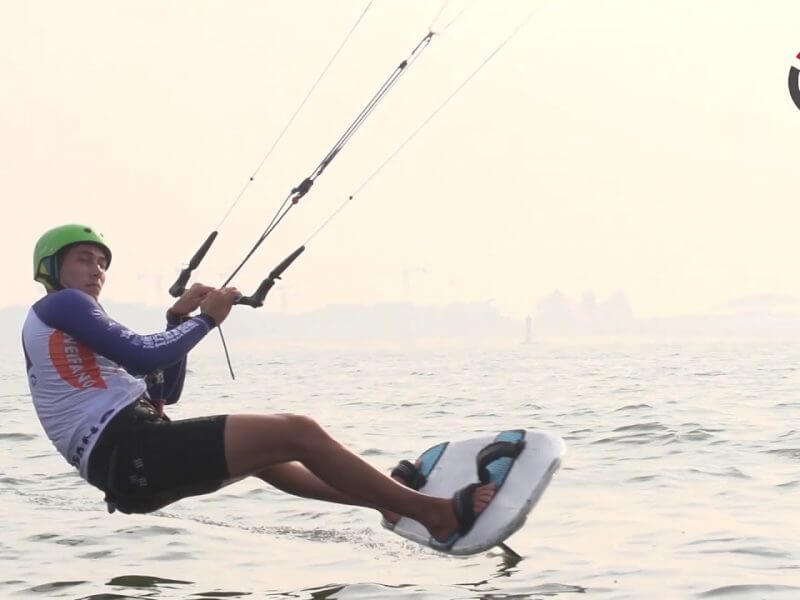 Many of the world’s fastest kitefoilers have been limbering up for the second stop of the International Kiteboarding Association’s (IKA) KiteFoil GoldCup series in eastern China.

True to form, the Yellow Sea off Weifang Binhai has been serving up flat waters and light breezes characteristic of the time of year. But the foilers on their largest 21m kites have been notching up impressive speeds as they test their pace against rivals and team-mates.

Thirty-eight riders from 16 countries registered for the KiteFoil GoldCup event and Twin-Tip:Racing (TT:R) Open Slalom competition scheduled to run simultaneously over five days of competition if the wind proves sufficiently strong for both.

France’s Axel Mazella made a flawless start to his campaign, racking up two bullets from two races. 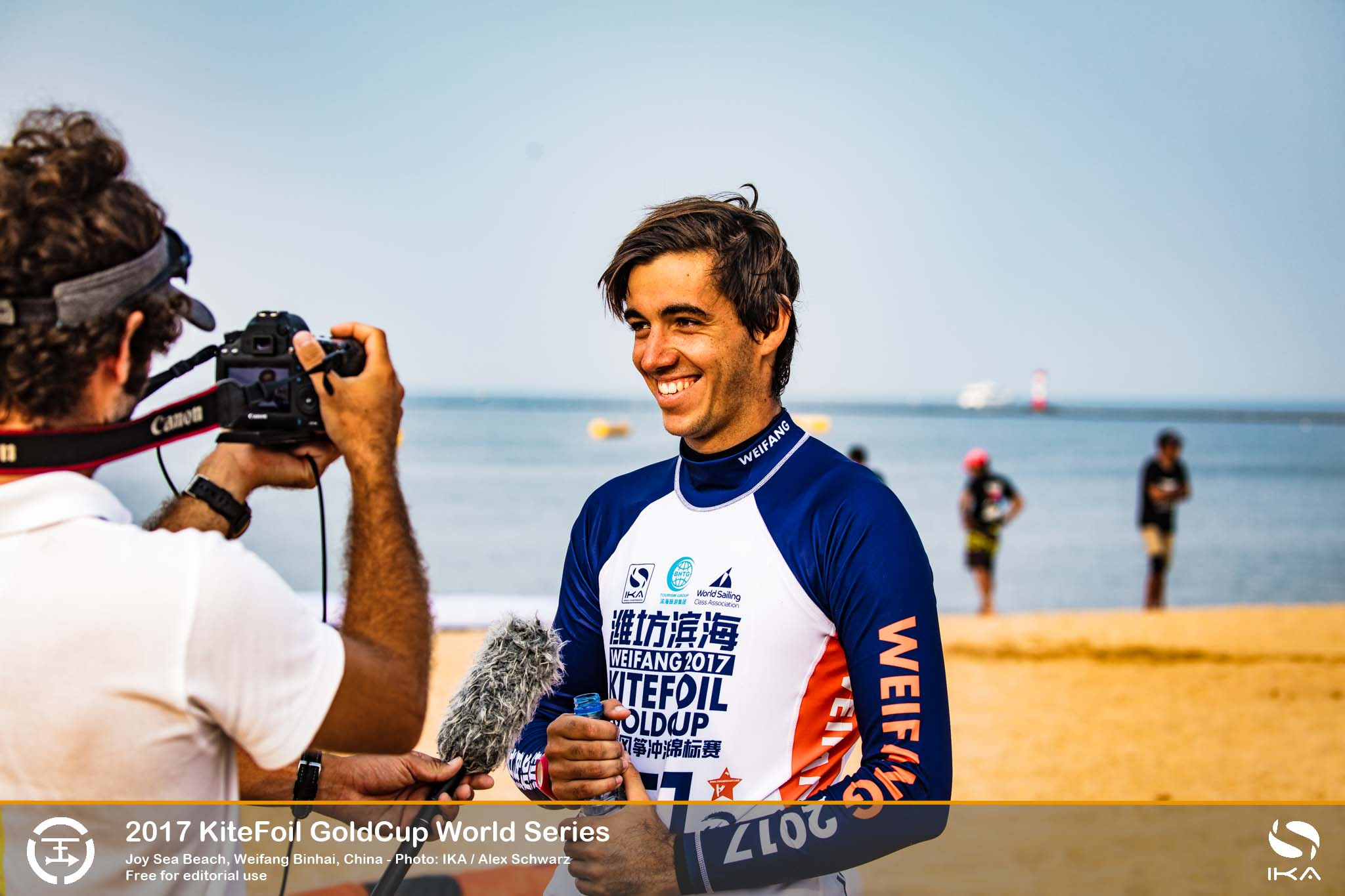 Mazella, still finding his feet on kites and foils from relative new-comer Enata, used the equipment combination to maximum effect leaving the field in his wake on the Yellow Sea’s near-glassy waters in a breeze that struggled to reach 8kts.

But on his unmarked red 21m kite—the size favoured by most rivals—he was able to scythe his way flat out around the two laps of the windward-leeward course, with 0.8 nautical miles between top and bottom marks, in a remarkable 14 minutes.

With the fickle light airs particularly difficult on Joy Sea Beach at Weifang Binhai, race officials were forced to set course far off the packed shoreline with the top mark barely visible through the haze in the sultry heat. 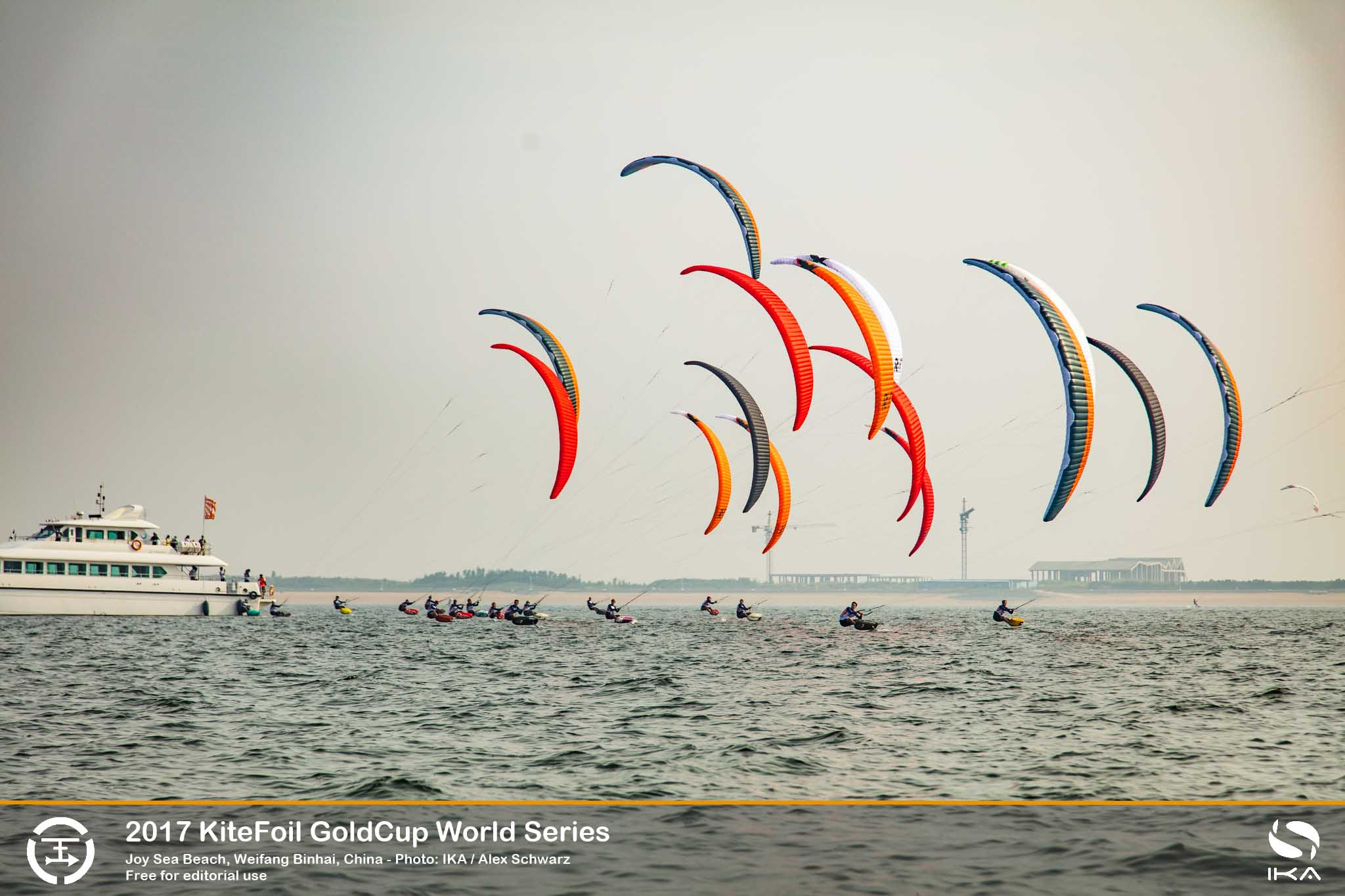 Even then, it was late afternoon before the breeze kicked in sufficiently to get the only two races of the day away in the opening salvos of the second stop of the “open” IKA KiteFoil GoldCup series, which has no equipment restrictions.

The Weifang Binhai event is the first of two sitting back-to-back in China, with the second scheduled for the reliably windy Pingtan Island, setting up the KiteFoil GoldCup finale in Italy at the Sardinia Kiteboard Grand Slam at Poetto Beach, Cagliari, next month.

But in a measure of Weifang Binhai’s commitment to driving its global profile through international kiteboarding, the local authorities again staged a sparkling opening ceremony to match their ambition for the region. 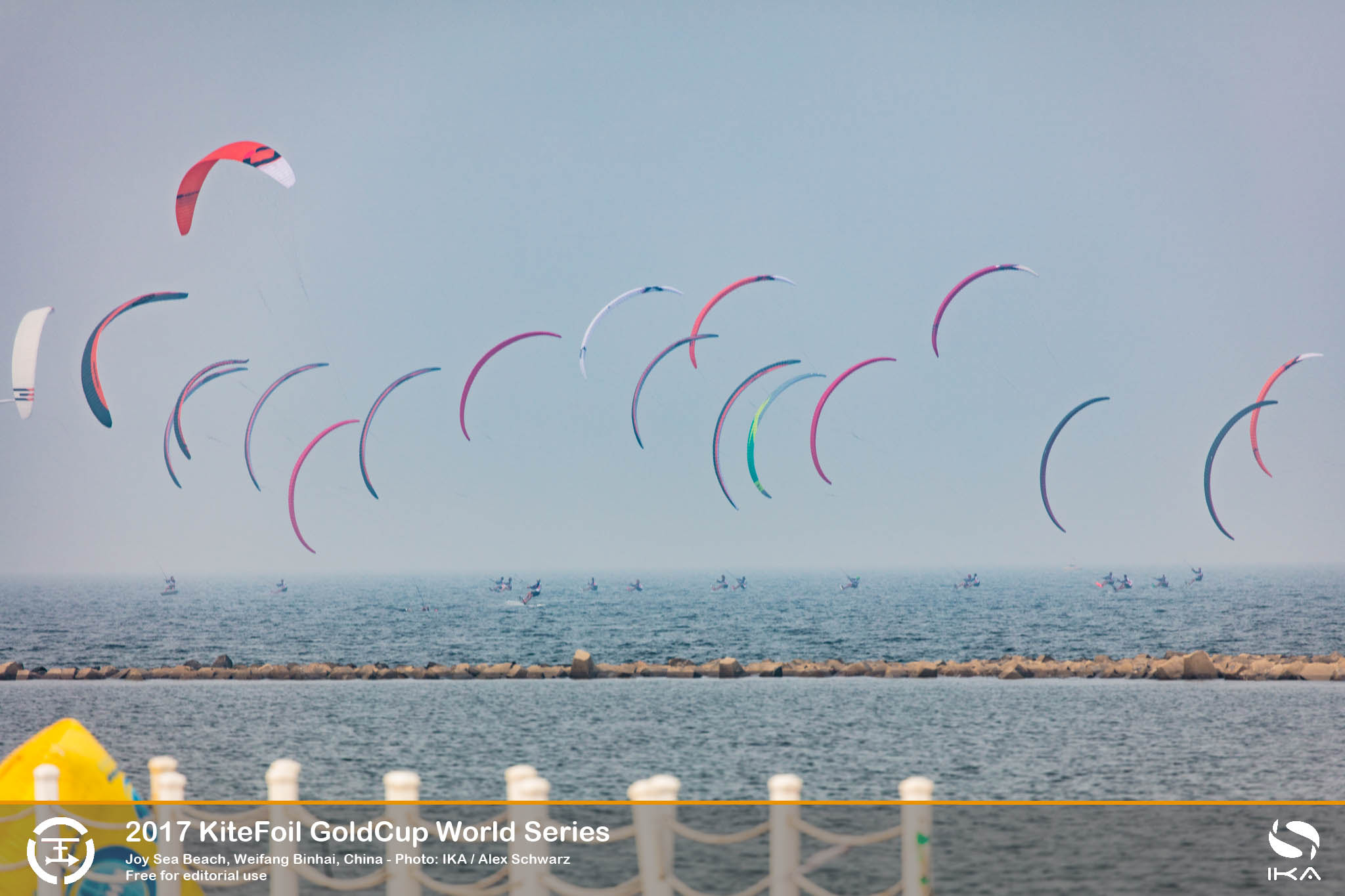 That scintillating opening was mirrored by the racing among the 26 riders from 14 nations who have made their way to China. Yet in the first exchanges Mazella, racing in the mixed fleet of men and women, was almost untouchable in an ominous signal for rivals in the classy field.

“The conditions were very light, maybe just 4kts to 6kts,” said Mazella. “But with my 21m kite it was the best for these conditions in flat water. Still, I hope we get a little bit more wind for the next days.”

In the day’s races Mazella’s Enata team-mate riding identical equipment, Theo Lhostis (FRA), was close to matching his countryman’s pace, scoring a third and a second to leave him in second spot overall.

But Britain’s Guy Bridge, younger brother of Olly, managed to split the pair in the day’s first race taking a good second on his Levitaz foil and 21m Flysurfer Sonic kite.

“In the first race I had a good start, and a good first leg on starboard, which was quite long, so it’s difficult for anyone to get past. The second race wasn’t so good. There were a lot of holes and I was tacking and looping the kite trying to get to the top mark.” 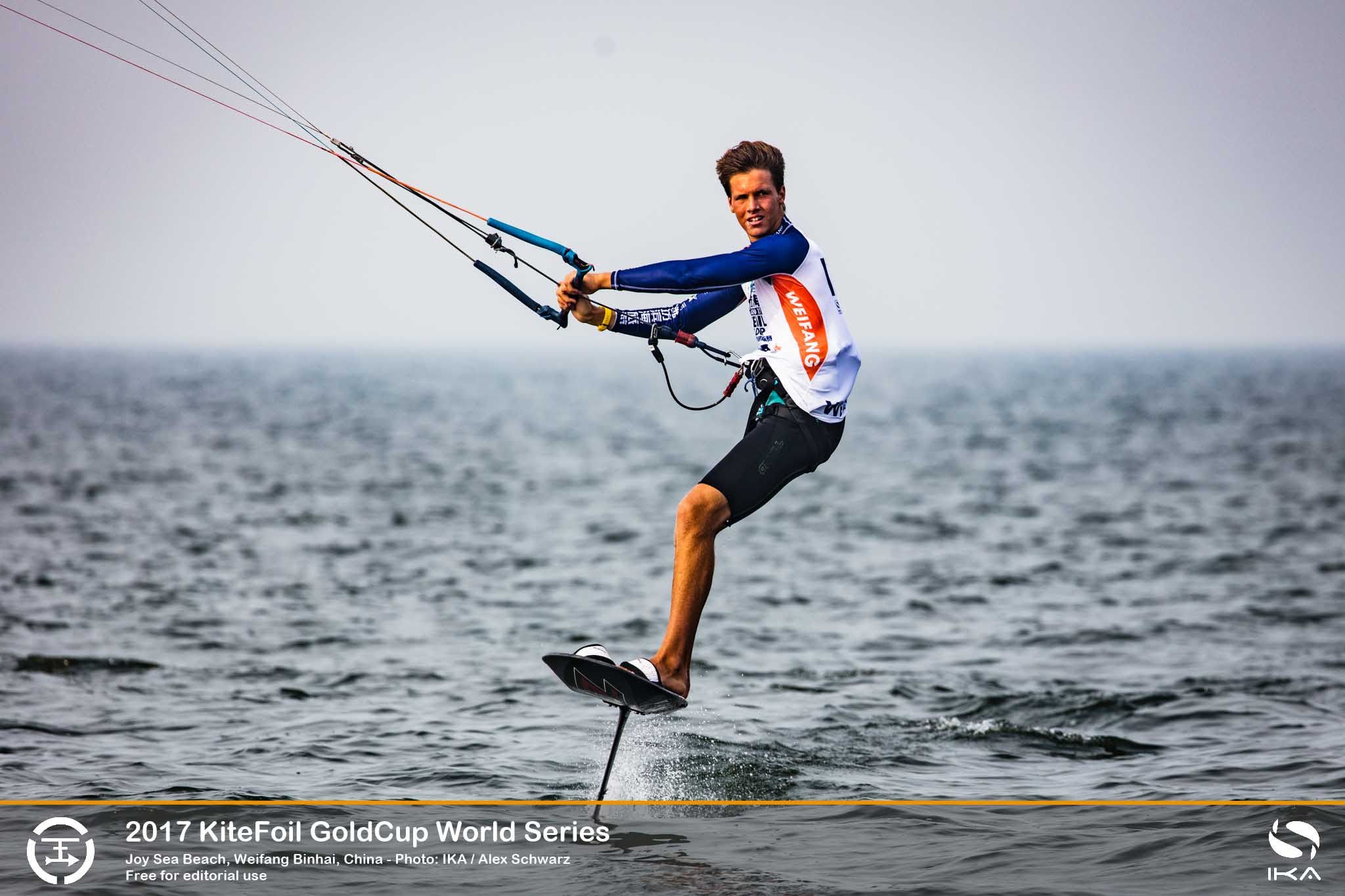 For the women, the second race in a dying breeze proved difficult. With all of them further back they were unable to complete the race. But in the first race France’s Alexia Fancelli won followed by Enata team-mate and countrywoman Anaïs Mai Desjardins, each outstripping former world champion Elena Kalinina (RUS).

Desjardins, the winner of the first leg of the KiteFoil GoldCup in Korea in May and also a new convert to the Enata team, was delighted with her showing on unfamiliar equipment.

“The first race today, compared to last year when I had old stuff, was very, very good. I’m really proud of myself,” said Desjardins. “I’m not used to light winds where I live in Dunkirk. But the 19m kite that I’ve used only three times was perfect.”