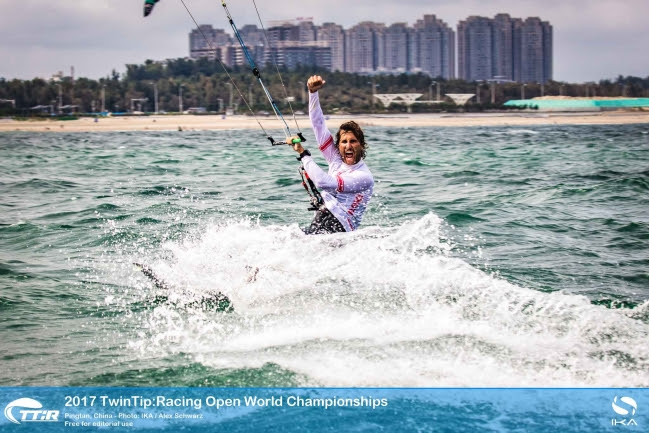 Germany’s Florian Gruber maintained his composure to see off challenges that could until the last race have derailed his bid for the inaugural International Kiteboarding Association (IKA) TT:R World Championship slalom title China.

In clinching victory on the final day of competition in Pingtan, Gruber made it back-to-back TT:R world titles after seizing the twin-tip course racing crown in Weifang, China, a year ago.

But to ensure victory in Pingtan on the fifth day of competition Gruber—who began the day equal top on points with three other riders—knew he could not afford to put a foot wrong with European champion Martin Dolenc (CRO) breathing down his neck. “I was defending my World title and it was fun,” said a delighted Gruber. “But right up until the last race I knew Martin Dolenc had a chance to win too, so it was good to beat him, especially after he won the Euros.”

In the hotly-contested women’s division, 17-year-old local favourite, Jingle Chen (CHN), secured the World Championship title after a series of races races that saw the overall lead change hands constantly as the breeze freshened to a punchy 17kts. “I’m so happy that I could win here because I’m the local girl,” said Chen. “I know that the stronger winds are better for my style of racing. But, still, I was a bit nervous and excited beforehand, so it was great to come out on top.”

The championship on the East China Sea off Pingtan’s Beach was part of the China International Kiteboarding Festival that also hosted the third round of the 2017 IKA KiteFoil GoldCup being staged simultaneously.

The fast-emerging TT:R slalom-boardercross discipline of knock-out heats of eight riders is fast and furious. Riders race over five down-wind legs, jumping obstacles to spice things up, in mini-contests that last barely four minutes. The format, devised to ensure ease of access for the most riders using twin-tip boards and inflatable tube kites, will be used at the Youth Olympic Games next October in Argentina. In Pingtan it attracted 65 riders from 17 countries to the TT:R Worlds and the U-19 TT:R Youth Open, made up of those who will be eligible to compete in Buenos Aires.

In a tense final day’s races, the trio traded the top three spots. But it was Tyson who kept his nerve seeing Maramenides first crash as he led the penultimate finals race, and then disqualified after he crossed the line early in the last race. “I’m really, really happy,” said Tyson, 15. “In the race where he crashed I was just behind him. We rounded the first and second marks cleanly, but he kept looking back. Then he just went flat on his face. In the last final I knew he [Maramenides] was over early, so I didn’t take any chances. By then I knew I could discard the score and couldn’t be beaten anyway.”

Gruber had no such margin for comfort in the Men’s title. A win by Dolenc in the final race would have given him the title. But the Croatian could only managed third faced with the Gruber’s superior pace, and ultimately took the second podium spot, with France’s Julien Kerneur just behind. “In that last race I had a good start, and on the first reach I was always winning,” said Gruber. “That was definitely the goal. Once you have that spot you’re out of trouble and behind the others have to take care as you’re in control. I’m super-happy with the back-to-back world titles here in China.” 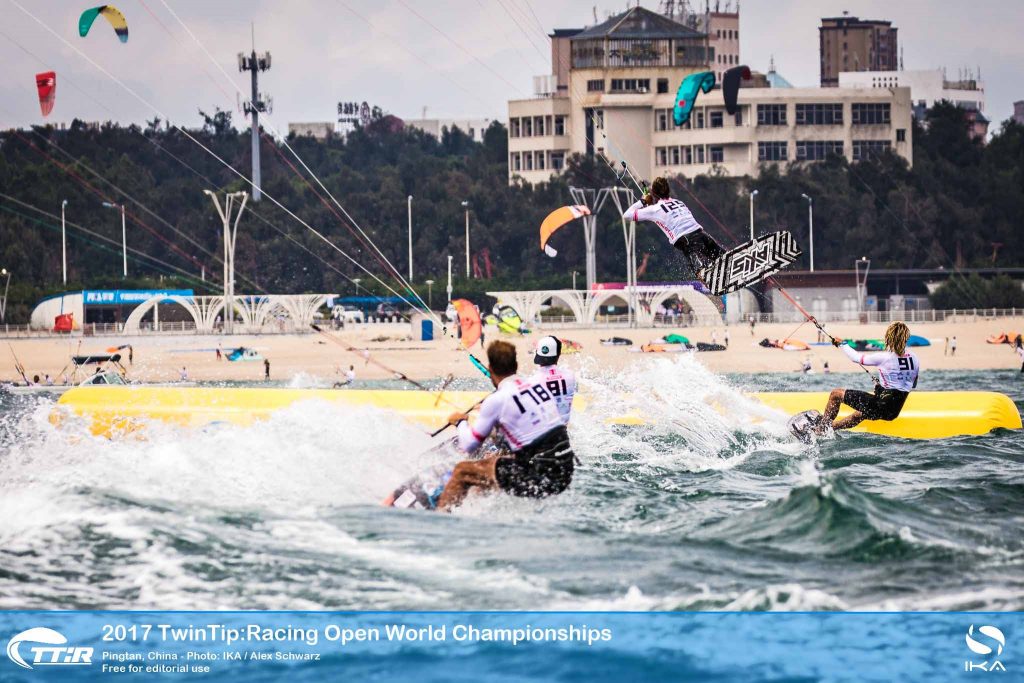