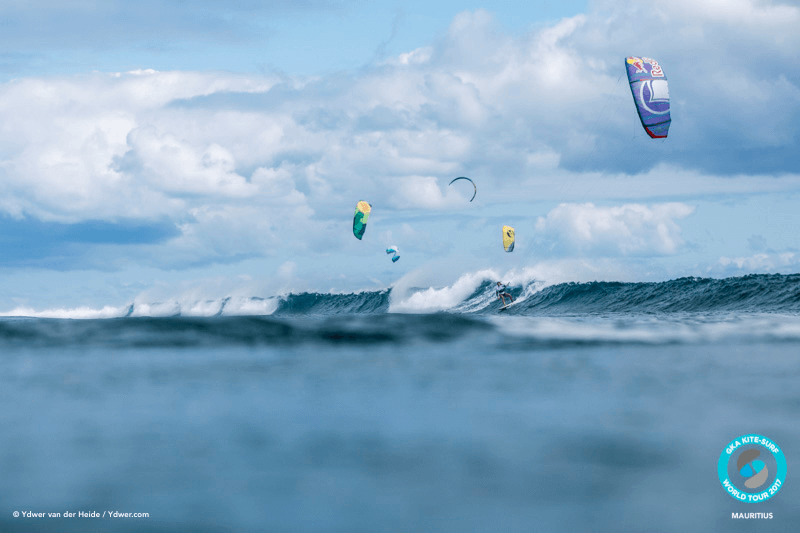 Today marked the final day of the main event here at the GKA Mauritius season finals as the women’s double-eliminations, which had begun yesterday in between the final rounds of the men’s comp, wrapped up.

As this was a double elimination, once the competition reached the final round the winner of each two-rider heat would progress to the next one, so there would be a 20 minute break in between heats during which contestants could catch a quick breather before taking on their next opponent. 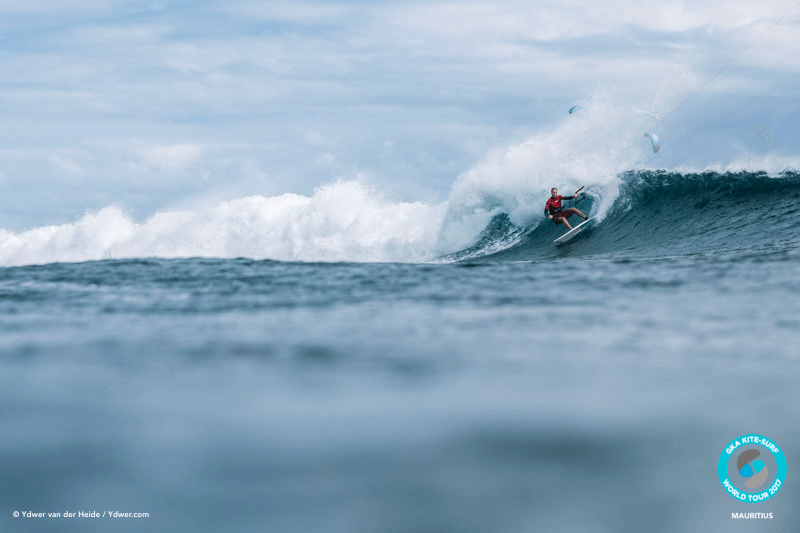 Jalou gunning it from the off and progressing to the semi-finals / Photo: @Ydwer

With clean waves to be had the riders out on nine metre kites it was Jalou Langeree up first in heat 14A against Larissa Fadeeva, a rider from Mauritius. Larissa’s a local but her inside knowledge of the wave wasn’t enough to overcome Jalou’s technical waveriding prowess and Jalou won comfortably and progressed straight into the next round. 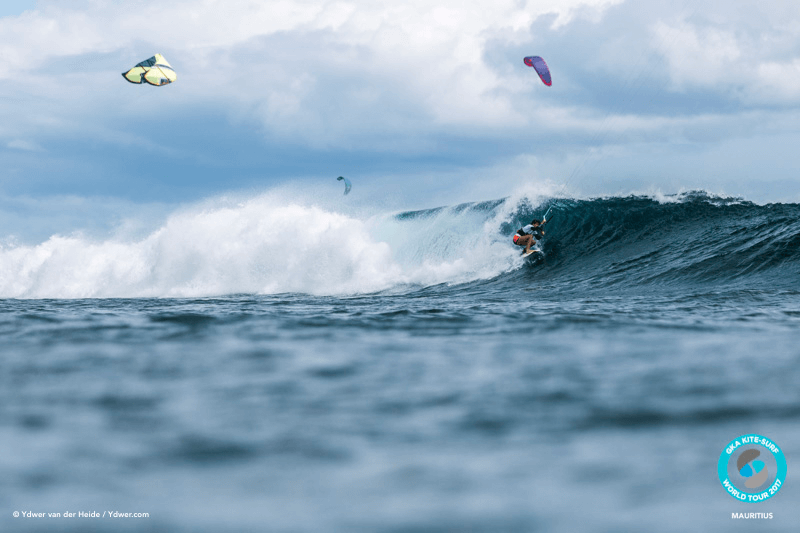 Gisela Pulido then beat Marie Gautron in heat 14B (the final heat of the round) and she then went on to face Jalou Langeree in the first heat of the finals. Jalou and Gisela are two of the most seasoned female competitors in the history of kiteboarding, so they’re comfortable under pressure but Gisela’s resume, while seriously impressive with ten world titles, consists of mainly freestyle victories, while Jalou is a two-time former world wave champion.

Although Gisela has really taken to the strapless waveriding discipline in recent years she couldn’t have hoped to contend with Jalou who was on a mission to claw her way back up the table after an impromptu exit in the single-eliminations earlier this week at the hands of Brazilian backhand charger and last year's Dahkla event winner, Milla Ferreira. 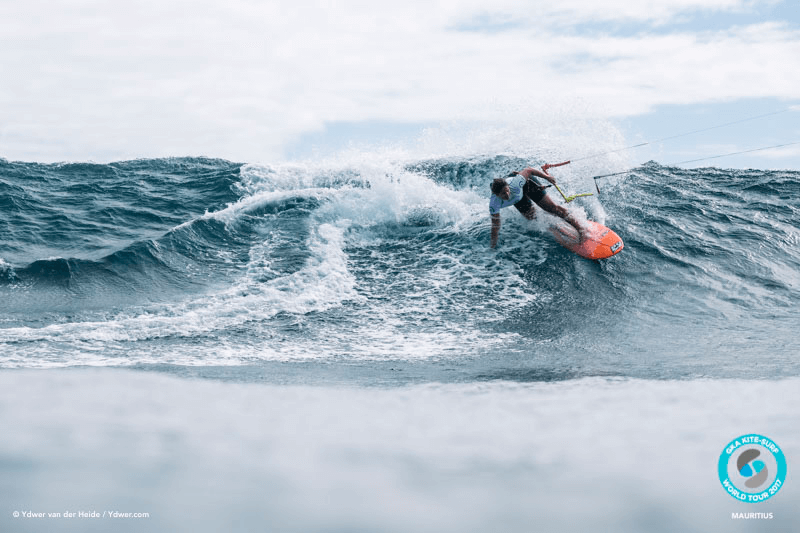 Next came Jalou’s chance to settle the score with Milla who had ousted her from the competition with a highly tactical performance during the singles, and Jalou wasn't about to let it happen again. Some of the heats had seen a dearth of waves but theirs had some some fast, peeling sets and Jalou set about the task at hand with dynamic frontside bottom turns that catapulted her back up the face while Milla hit back with her powered, surf-style backhand riding. 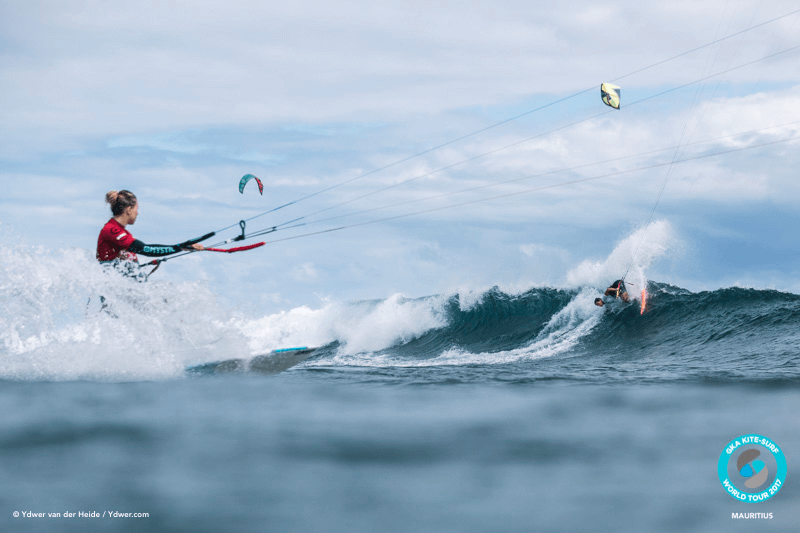 Jalou scopes out Milla's progress during their heat / Photo: @Ydwer

Jalou took more waves than Milla though and managed to make more out of them with turn after turn in what may well have been her best heat of the competition, earning herself the win. From there it was on to the next one as she stormed her way up the table.

At this point people were beginning to ponder if she was going to continue this meteoric rise all the way to an event win here in Mauritius, as she beat opponent after opponent, and in the next heat it came down to Tarifan rider Carla Herreira Oria to try and derail Jalou’s relentless progress. 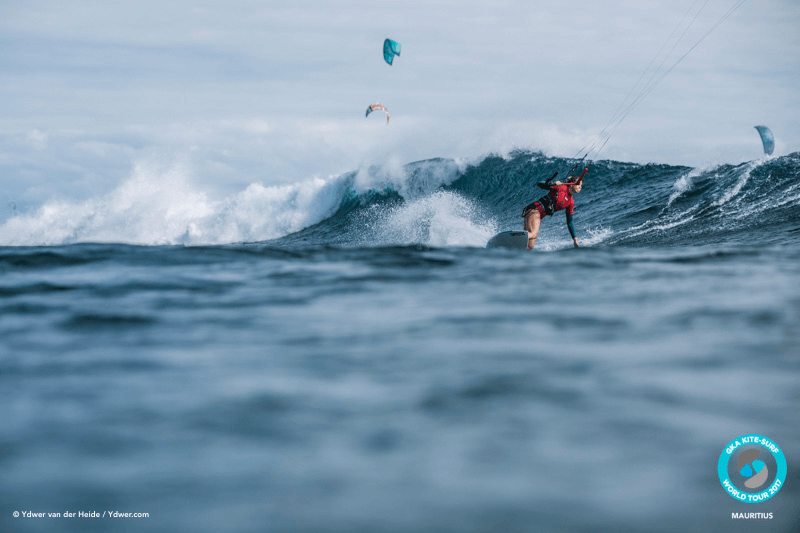 This was by no means an easy draw for Jalou though and this would also be the heat that decided third place at the event. Carla is known for having perhaps the highest strapless freestyle level among the girls at the moment and she’s also no slouch in the waves – comfortable taking on big sets and never holding anything back when engaging the wave’s face. Jalou selected the better waves though and was able to put on a more impressive performance even in smaller waves as the swell dropped, which is the mark of a truly experienced waverider. She beat Carla and secured her spot on the podium with Carla claiming a well deserved fourth. 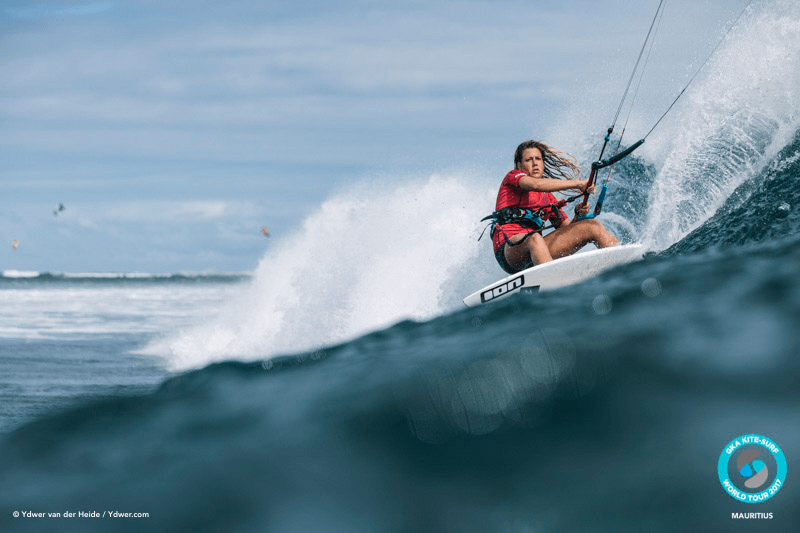 The next heat would decide if Jalou would continue on to the final or not and she had a formidable opponent in the form of 2 x One Eye event winner and local star, Ninja-Maria Bichler. Both Jalou and Ninja were riding on their front hand and this was one of the closest heats we’ve seen yet in the women’s division as Jalou’s explosive riding was pitted against Ninja’s sheer mastery of this wave. 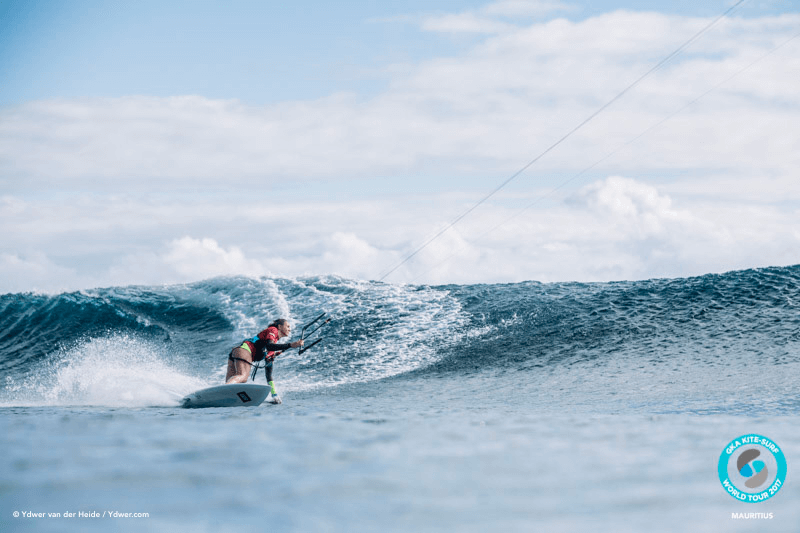 From the live screen on the beach it was impossible to tell who’d taken this one but Ninja’s countless hours spent on One Eye had clearly given her the inherent ability to make the better wave selection and that will have no doubt helped her win the heat and halt Jalou in her tracks.

Jalou had fought quite the battle to get to this point, having had to deal with the pressure of heat after heat against some very talented riders, so to take third after quite a long break from competition was impressive to say the least, but that marked the end of Jalou’s meteoric rise up the rankings. It was Ninja who would take on single elimination winner, Moona Whyte, who was therefore already lined up as the other finalist.

Although the wind had been a little turbulent earlier in the day it had properly filled in by this point and it was to be a backhand v frontside skirmish with both riders carefully reading the sets. 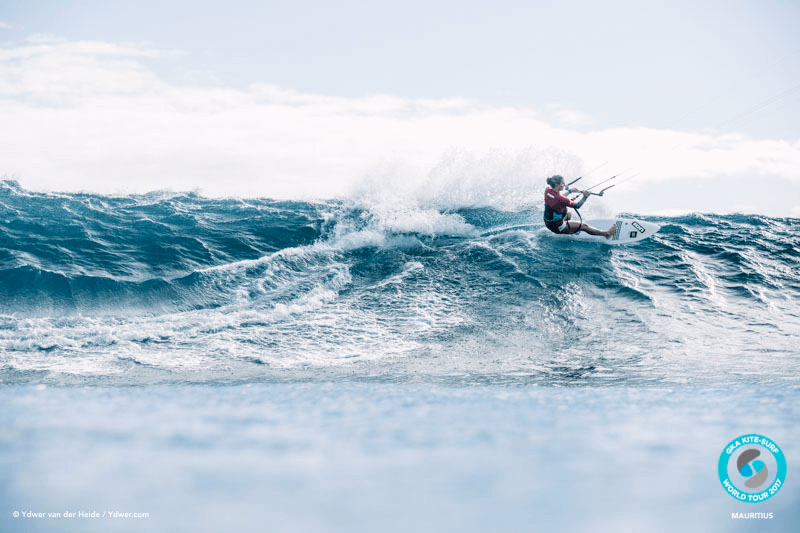 Ninja rode well, linking her turns while searching out the next hittable face and always keeping her momentum through the slow sections, but Moona’s graceful, flowing turns, interspersed with potent lip smacks won the judges’ favour and the heat, alongside the championship, which was hers! 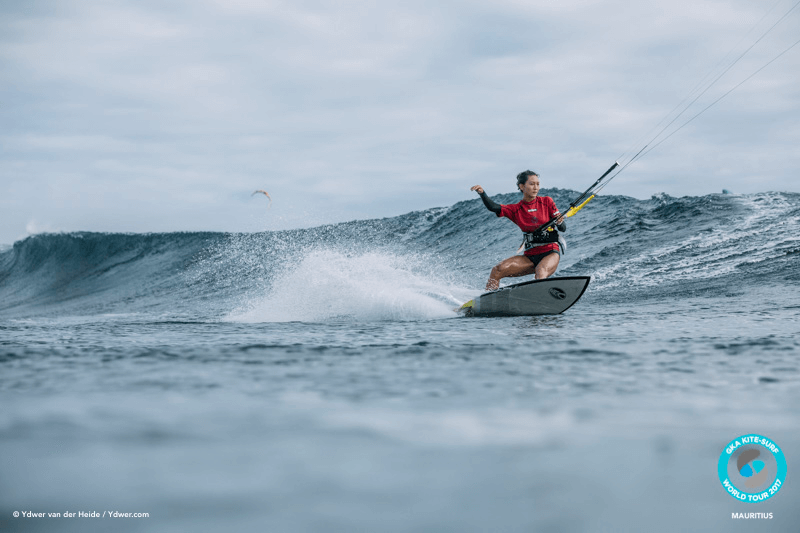 Calm and collected as ever – Moona seizes the day / Photo: @Ydwer

Speaking afterwards she said she was pleased with her performance, even though she would have relished the opportunity to take on Jalou as well, and she commented that it was an added bonus that she and her boyfriend, Keahi de Aboitiz (interestingly – also a backside rider here), had both won their divisions at this event! (Afterparty beers on them!)

Jalou and Ninja were also happy to have rounded out the event in the top three and both have plans to come back next year, with Ninja remarking that she has every intension of taking back first place and ruling One Eye once again, while Jalou hinted that she may become a more regular fixture on next year’s tour. 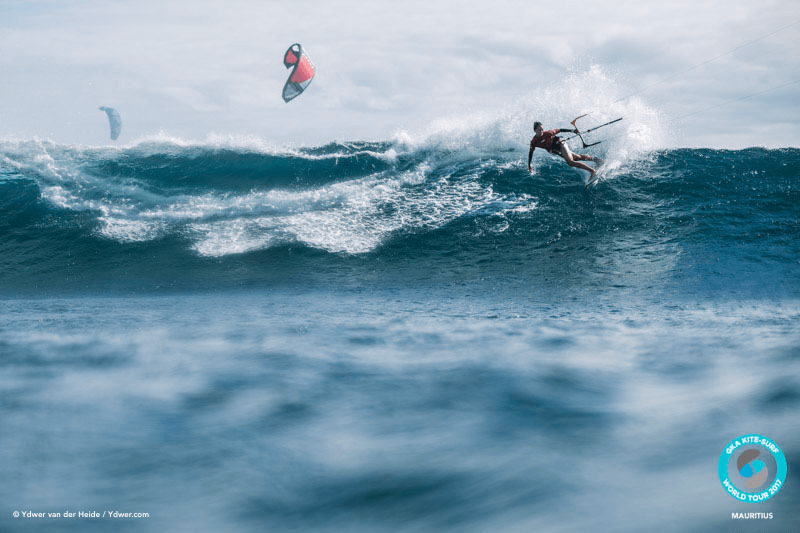 Moona makes the drop and cracks one off the top / Photo: @Ydwer

Moona’s win also means she is now the official female World Champion as the GKA has been awarded the right to crown world champs in this discipline, so we expect to see her again next year when it's time to defend her title.

With the main event over, tomorrow is a scheduled lay day but there’s a strapless freestyle expression session on the cards later in the week if conditions allow. Keep an eye on GKA socials for the full action highlights video from the women’s division coming soon! 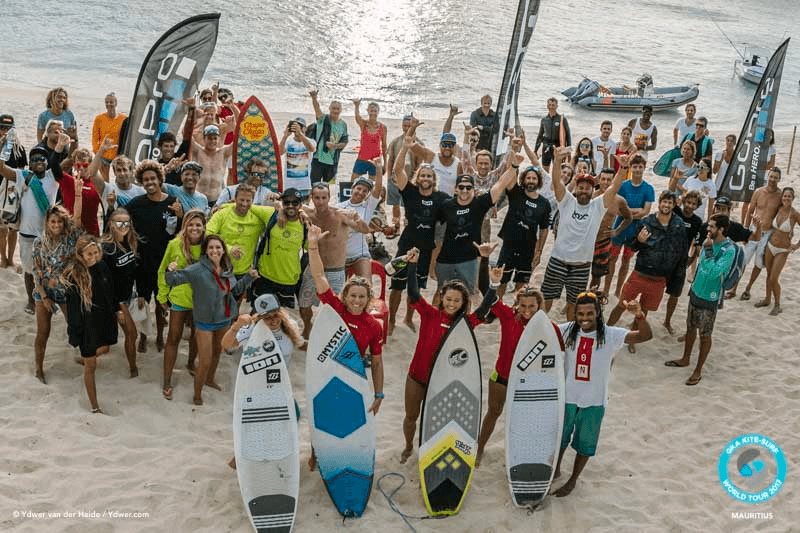