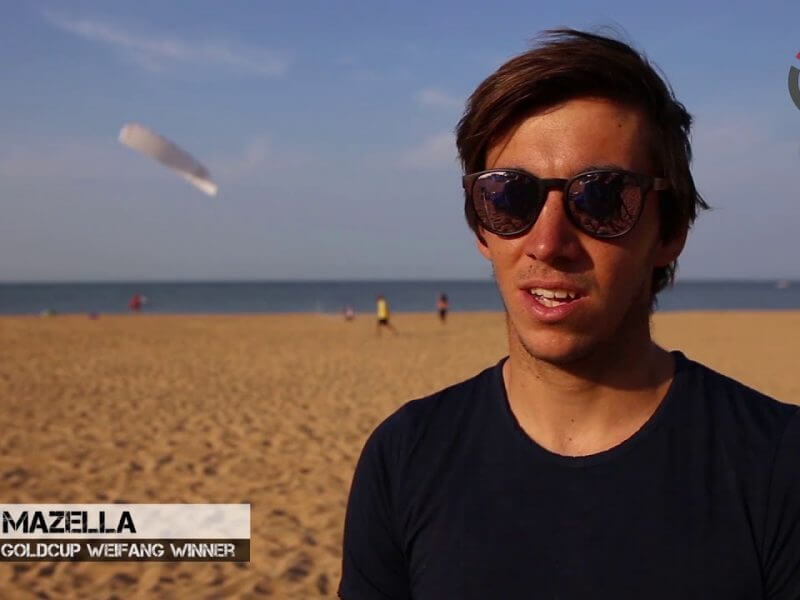 But heading out on to the water with his 21m kite in the light airs that had taken most of the day to fill, overnight leader Mazella was aware that Britain’s Guy Bridge just behind in second place overall was breathing down his neck and the slightest mistake could cost him the event. In the end the Team Enata foils and kites’ poster boy held the lead almost from the start of the first race. He finished well ahead in the 7kts to 8kts of breeze on two laps of the windward-leeward track on the Yellow Sea’s smooth waters.

In the light airs Bridge, on his 21m Flysurfer Sonic Race kite and Levitaz Bionic foil, could only manage third behind his other key rival, Enata’s Theo Lhostis (FRA). But in the day’s second race as the breeze freshened to 9kts Bridge was hot on Mazella’s heels all the way around the course, with only a few seconds separating them at the end. “I am really happy,” said Mazella. “In the first race I was a bit nervous because Guy Bridge was close enough on points that if he won and I came second or worse, I could lose the overall lead. When I got the win in that race I was able to relax. Still, in the second race, when the wind was a little bit stronger, he was better and it was much closer.”

The contest among the women, racing in the mixed fleet, was similarly tight. But even with former Formula Kite World Champion Elena Kalinina (RUS) and France’s Alexia Fancelli locked together on points at the start of the day, the Russian edged it when she twice crossed the line just ahead of her rival, with the fast-improving Anaïs Mai Desjardins (FRA) close behind taking the third podium spot.

Despite Mazella’s win in Weifang, Guy Bridge, 18, could stake a claim to being the most exciting rider. On day three of the five-day regatta, Bridge racked up an amazing four bullets from six races and was a whisker from taking a fifth in the stiffer breezes that hit 12kts to 14kts.

For the younger brother of seasoned racer Olly Bridge (GBR), it was a stellar performance and marked his breakthrough on a day when he lived up to the promise he had hinted at for some time, always showing great pace but lacking consistency.

After grabbing the overall lead with his audacious performance, his disappointment was palpable when he surrendered the top spot to Mazella on day four after he struck something in the water and was thrown from his foil, struggling to get going again in the ultra-light breeze. But even as he battled to close the two-point gap to Mazella in the final day’s two races, he knew it would be tall order to overhaul his French rival in the lighter breezes that favour his physique and Enata foil and kite set-up.

Bridge was phlegmatic about his runner-up spot. “I’m pleased with that, especially in these light winds. I’ve never done anywhere near as well at a major event so, really, it’s all good. I didn’t expect too much coming to China.” Bridge was pushed all the way by Lhostis, also 18, who took the third podium spot, and was delighted with his showing that similarly signalled his best run at a big event. “I’m very, very happy,” said the ever-cheerful Lhostis. “I think my pace and racing is getting better and better. It was so close between me and Guy Bridge. On the course I was looking out, ‘where is Guy, where is Guy?’”

For Elena Kalinina the worry was where was Alexia Fancelli? The Russian found herself stretched as they almost matched raced one another around the track in both races. “She was pushing me at the start, on the the up-wind and down-wind legs when she didn’t want me to tack or gybe,” she said. “But I’m happy. It was very interesting. Very often at events the level is so different. But we were very similar and it was good. We were so close.”