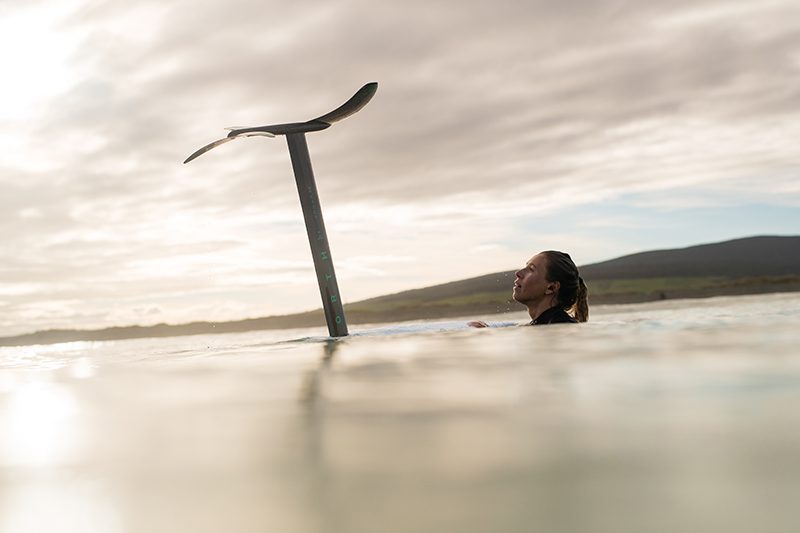 Jalou: Giving something back

Words by: Victoria Stuart
Photos by: Scott Sinton (unless stated)

Ocean Ambassador Jalou Langeree is taking a stand for marine conservation. Life in the sea is under threat and human actions are endangering the creatures in our planet’s largest habitat. Over 50% (and potentially as much as 80%) of the planet’s species live in our ocean, and every one of them is in danger, be it from entanglement in fishing gear, collisions with high-speed ships, commercial whaling, ocean noise pollution, marine plastics or – most catastrophically – the effects of climate change.

Three-time World Kitesurfing Champion Jalou Langeree recently put her hand up to play her part in protecting these animals and the place they call home. She teamed up with the International Fund for Animal Welfare (IFAW) to help make the ocean safer and healthier. IFAW is a global non-profit organization which helps animals and people thrive together. Both experts and everyday water lovers work across seas and oceans in more than 40 countries around the world to rescue, rehabilitate and release animals, and to restore and protect their natural habitats.

Juli Riegler, IFAW’s Communications Director for Europe who got to know Jalou through their shared love of CrossFit back home in The Netherlands explains that, “Jalou comes into contact with the same themes that we tirelessly work for: whales, dolphins, seals that get caught in fishing nets, marine life suffering from plastic pollution, the stranding of whales and dolphins caused by ocean noise and climate change, as well as whale hunting and ship strikes.

“She has been dominating the worldwide kitesurfing scene for years. Thanks to her success in the sport, she has a strong voice and global reach to mobilize others for this important cause.”

With her life and career focused on the ocean, Jalou has come across plenty of marine animal suffering and pollution on the water. So after meeting Juli and learning about IFAW, she decided to take action: using her presence and voice for the oceans and its animals. We caught up with Jalou while she was in Dakhla, Morocco at the 2020 Dealer meeting for Mystic and her new sponsor, North Kiteboarding.

“I once did a kitesurfing trip near Denhelder, in the north of Holland,” recalls Jalou. “If you tack upwind for about an hour there’s a massive sand plate in the middle of the ocean – usually there are sick waves that wrap around the bar, but that day there were no waves. You’re not allowed to stand on the sand bar, but we wanted to check out the seal colony. As we came closer they started to move off, but I noticed one seal was a bit slower than the rest. It had a fishing net tangled around its neck. We tried to help, but it was a big, aggressive seal, it was scared and we only had a small knife, so it was really hard to do any good. We did manage to cut some of the lines, but it still had a massive rope around its neck, digging into the skin. It was so sad for us to see the seal go back into the ocean like that.

“Afterwards we spent hours on the phone trying to get help for the seal. We finally contacted Eco-Mara, who arranged a search, and eventually found and rescued it. It’s hard to see an animal suffering like that and not want to help,” she explained. “The problems they face grow larger and more complex every day.”

Patrick Ramage, Director of Marine Conservation at IFAW, says whales and many other marine species face more threats today than at any other time in history. “This is why now more than ever, we must do all we can to protect them, as they are vital to the survival of the entire marine ecosystem. We’ve been around for fifty years, but we know our solutions can’t stay the same – we have to think, and act, differently. We have developed new technology to safely release animals back into the ocean, and when we wanted to stop whale hunting in Japan, we called up the very last entity you would imagine: the Icelandic Tourism Board. Generally, together with local communities, governments, non-governmental organizations, and businesses, we work to pioneer new and innovative ways to preserve marine landscapes, and to rescue wildlife and help all species flourish.”

Jalou, along with her brother Kevin, recently spent a week visiting the International Operations and Marine Mammal Rescue Centers at Cape Cod in the US, where she had the chance to deep dive into the IFAW programs. She studied seal surveys, went whale spotting and took part in an autopsy with the marine team, all of which allowed her to gain insights into the biggest threats our oceans and its marine life are currently facing. She also learned of the campaign to save and forever protect the highly endangered North Atlantic right whale. “They have such great volunteers, all on standby to help – and they’re so passionate about these beautiful creatures,” enthuses Jalou, “It’s like when there is a fire – the people are there in time.”

You can hear the passion in her own voice as she talks about seal observations, whale strandings, the marine mammal ambulance and the way IFAW have successfully lobbied to change the routes of commercial shipping channels, navigating boats away from whale feeding grounds, and educating them to slow down so noise doesn’t affect the sonar of the whales.

Jalou advises kiteboarders to keep the number of your local rescue organization in your phone to alert them if there’s an animal in need, rather than try to do it yourself, and also notes that, “Nature is the inspiration for so much of what we do… When we kite we feel so in tune with nature, so connected. We must work harder to protect it.

“There is so much more we can all do. I’m not sure exactly how I will combine my work as an IFAW ambassador with kiteboarding just yet, but watch this space! And in the meantime, check out the IFAW marine conservation programs online to see how you can help: ifaw.org.”

Back in Dakhla, Jalou is enjoying another pivotal moment in her kiteboarding journey. In 17 years of kiteboarding she has only changed sponsors twice, from O’Neill to Mystic, and Naish to North. Now the new equipment is out in the open, she is excited to be so closely involved. “I can’t wait to see everyone’s reaction to the new gear – we’ve all been on a mission to make it the best possible. Testing the products and giving team-rider feedback to the North design team has been very motivating, and we have a kick-ass team, all super-passionate and a little crazy in their own way. We’ve been friends for years, and now we get to work together on a mutual dream.

“As soon as I get my own gear I’ll go to Mauritius to compete in the GKA, which is pure wave-riding, and it’s a super proper wave! I’m confident there. It’s been a while since I competed last, because I had a back hernia for a long time. I did compete and win the tour last year, but at one point it got a lot worse, so I had to step back and get healthy again.

“For myself this year, I decided to just do the tour stops I really want to go to. I don’t have any pain now, but I do try to rest a lot and listen better to my body. I do some stretching exercise that I get from my physio, and I’m really committed to being healthy. You know, nut butter, overnight oats, stretch… we exercise so much, so if we live like rockstars we’re not going to last too long!”

“I’m a really active person. I love moving. I start my day waking up and doing something – if there is no wind or waves, I’ll do a spin class, then if the wind picks up I’ll go out for a kite, foil, SUP… I just want to be able to have fun on the water. Whatever the conditions are. I don’t mind what the discipline is, I just want to be able to enjoy whatever it brings.

“Foiling opens up a whole new world. You get so much more water-time, fly in like zero winds, and have the longest ride of your life. It’s insane. Even here in Dakhla where the wind is good, because it’s so flat and I’ve been dying for waves, I’ve been surfing the wind swell on the foil. I tow upwind holding on to someone’s leash, then let go of the harness and just flow with the wind. You keep going until your upper legs burn so much you can’t stand anymore.”

Jalou started foiling right at the beginning. “The foil is very relaxing, it’s so silent. And so different to riding a wave board. You need proper concentration and to spend some time getting it. You feel like a complete kook when you start, like you’re never going to get it. But when it comes together it’s just magic.”

With a comprehensive list of accomplishments under her belt already, it’s hard to pinpoint the biggest highlight of Jalou’s kiting journey so far. But becoming world champion in 2012 for the very first time was up there… “It wasn’t just the feeling of being the best at that moment, but a combination of a whole year of personal growth and independence, not traveling with my brother and following a new passion in wave-riding on a different world tour,” explains Jalou.

“I was being crowned in Hawaii and you can just imagine: palm trees, white sandy beaches, crystal clear waters, sick waves. I was 22, and it was the first year I traveled by myself, so winning the tour was a huge personal achievement for me. A couple of days in advance, I would go to every spot so I could get to know the location and the conditions, and I was so independent with the traveling, competing and dealing with stress, it wasn’t easy as I was really used to having my brother around to hype me up, tell me I’m going to smoke it. He talks to me in a way that gives me confidence, and when you travel by yourself you really miss that.”

But for now Jalou is fully focused on working with her new sponsor, focusing on a couple of stops on the GKA tour and, of course, working closely with IFAW to improve the condition of our oceans and the creatures which call it home…