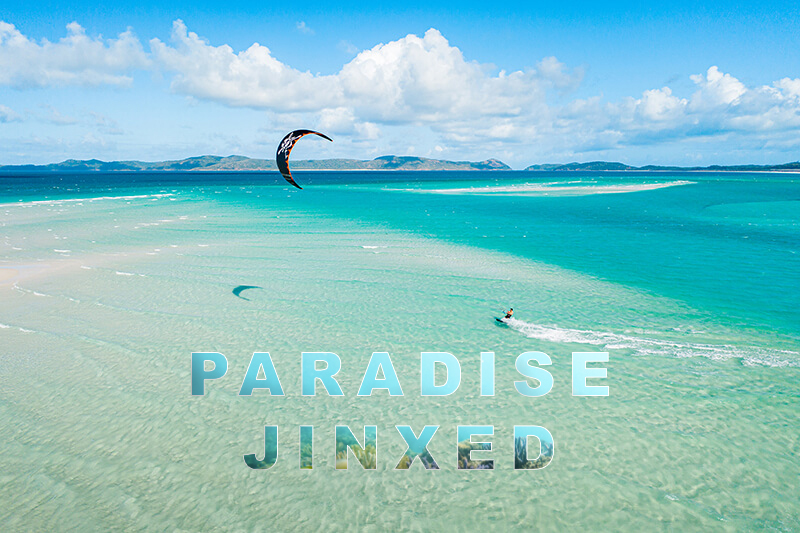 If anything is going to bring out your jealous side while you’re stuck at home under lockdown, this story is it. 2019 Kite Park League champion Ewan Jaspan and fellow Naish riders Katie Potter and Peri Roberts managed to escape to the beautiful turquoise waters of Australia’s famous Barrier Reef and Whitsundays… There were the predictably stunning consequences, but more than their fair share of mishaps too.

If you think about escape, what comes to mind? Breaking free from the confines of a tricky situation? Escaping havoc to re-define your way of day-to-day living? Or do the images of a simple paradise flood your imagination with the beauty and good vibes an island retreat might bring you? Put them all together and you get a 2400-kilometer car trip, three state border crossings (Australia is massive), lots of coffee and three wind-hungry kiters searching for the ultimate escape from some of the toughest Covid-19 lockdowns regulations on the planet.

After restrictions in our home states worsened, Ewan, Katie and I decided to travel north to catch some wind and warmer weather. The Naish duo are from Victoria and I’m from New South Wales, both states that were dealing with some pretty harsh lockdowns. Ideas were passed around about the possibility of kiting the ultimate paradise in the Whitsundays – known in Australia as the home of the rich and famous. Think desert islands, crystal clear waters, white sands, tropical reef, blues of every shade as far as the eyes can see, and wind… Lots of wind. Situated near the southern Great Barrier Reef, we knew that kiting at any of the 75 islands would be hard without a boat to access them. Luckily kiting brings the like-minded together and Katie has a friend that could help us out… 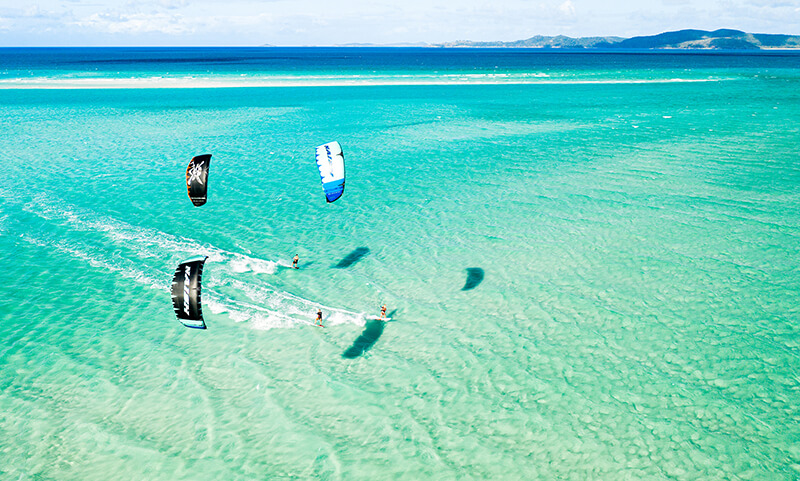 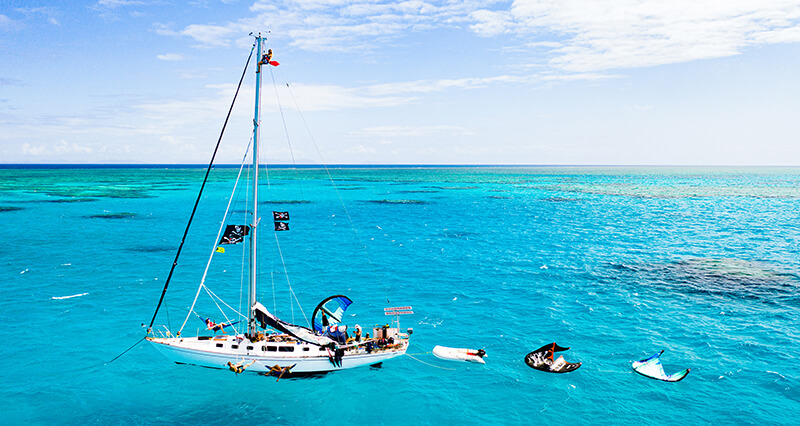 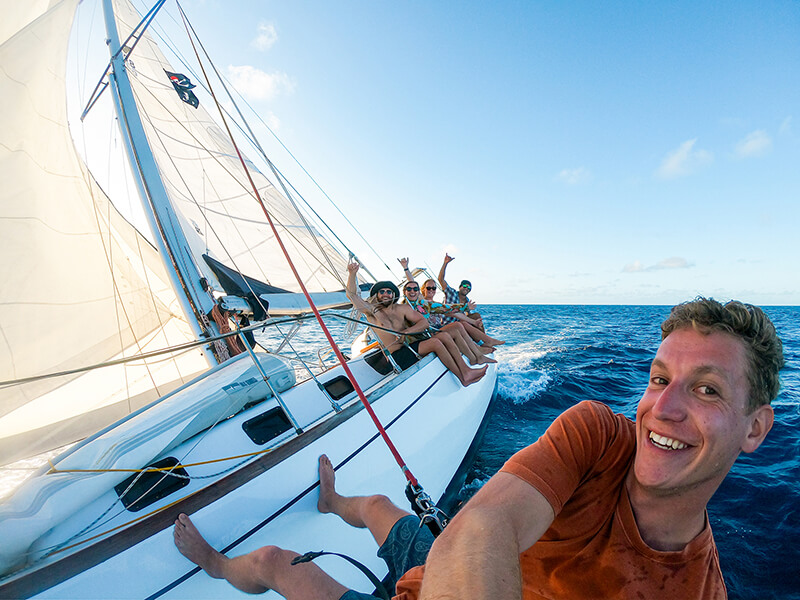 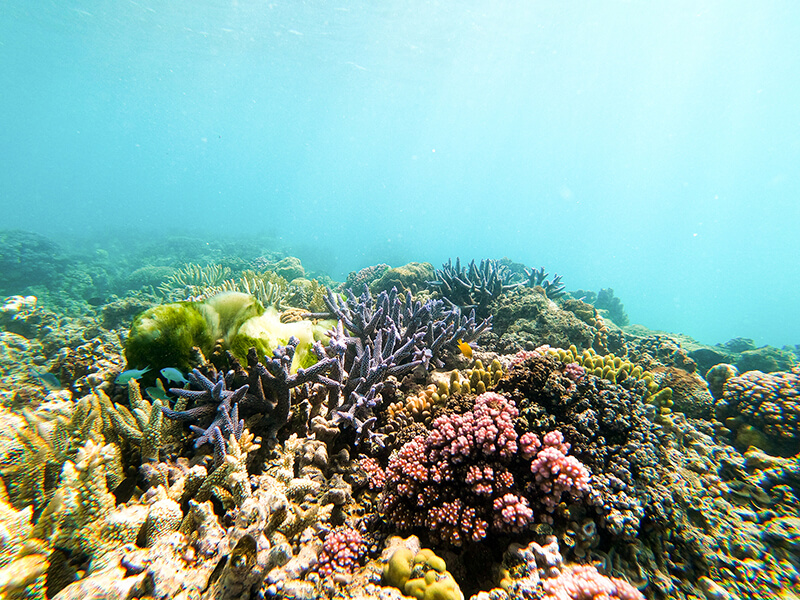 Let me introduce you to Captain Dave, a pirate fanatic and speed demon, his Cal 48 called Malaguena, a yacht built for speed, and his two rum-loving French yachtsman, Marc and Alex. Add into the mix us kiters and what felt like an eternity of dingy trips packing bags upon bags of kite gear, camera gear, food, coffee and rum. A quick word of thanks here to Alex the cook for keeping us fueled up. What do you imagine us hungry kiters ate for breakfast on the yacht? Nutella crêpes – every morning. Yum, but us Aussies did wonder how the French don’t put on excessive amounts of weight after eating mainly butter, sugar, cheese and pastries their whole life!

And so we embarked on our journey away from reality and into the ultimate escape. However, no great trip comes without a few bumps in the road, or should I say, a few peaks and troughs in the sea. Ewan was stressed about the seasickness he was about to face, while I adamantly swore I didn’t get seasick. We all laughed at his very vocal complaints, but after a few nautical miles out to sea, doubt began to set in. Suddenly I didn’t feel so confident and found myself eating my words – sea legs are real. A trip that was supposed to take only two hours from the small island we docked at on the first night, turned into four, then five, then “only half an hour more” about three times. As we were sailing out of the protection of the Whitsunday Islands, rough seas met us for the journey to our second destination, Hook Reef. The thing about sailing open ocean is that not only do you have to calculate tides, wind speed, direction, tacking and how many sandwiches it’s going to take to get to your destination, you also have to factor in the ocean current. That day, we foolishly neglected to do the latter, adding an extra five hours onto our trip, which meant five more hours of Ewan groaning. The phrase ‘man flu’ comes to mind… but let’s not go there.

Eventually we docked the yacht in a safe haven, positioned between a host of four coral outcrops. We watched the sunset with a beer and excitedly made plans for the days ahead. For us first timers, the famous Great Barrier Reef lived up to its reputation. At school we’re taught that it is the only barrier reef that can be seen from space – a fact we gleefully tell foreigners over a beer to boast about our cool country. But it’s not until you see it, and sail and swim over it, that you truly understand how insanely beautiful this reef is. The next morning, with a picture-perfect day warming up in front of us, we set the boat up with all the gear: kites upon kites, foils, twintips, surfboards, even a wing. We took turns kiting and taking drone shots from the boat. We were stoked with the outcome, as you can’t quite grasp the vastness of the reef until you see it from above. We even came across a family of humpback whales circling near the boat, on their annual migration north. 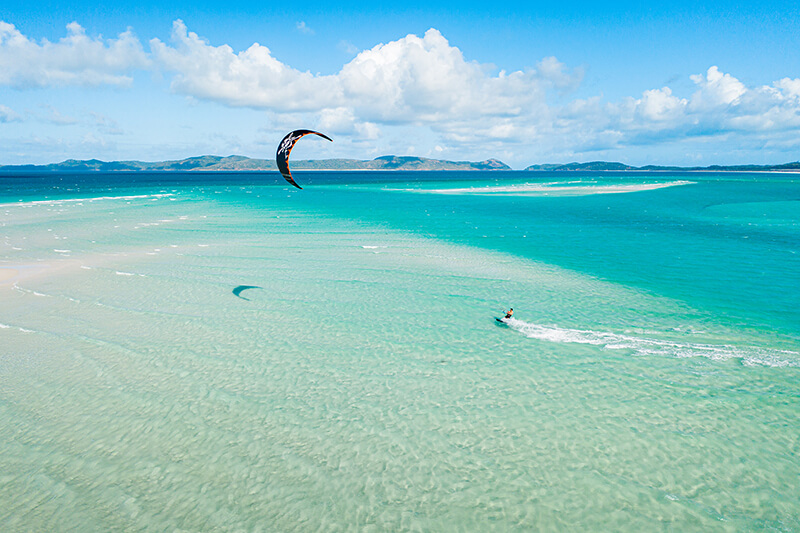 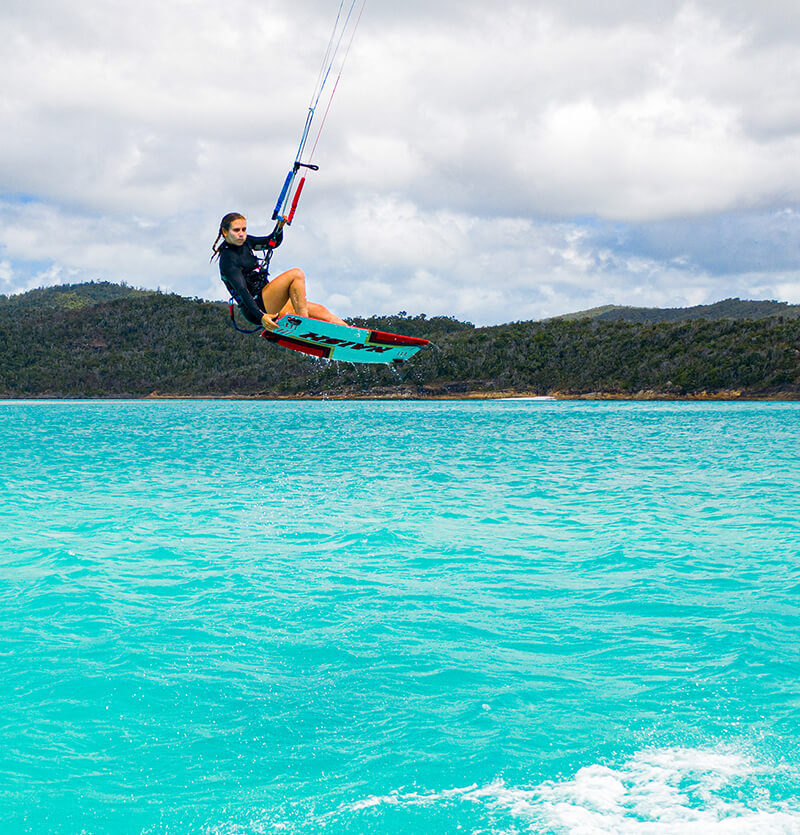 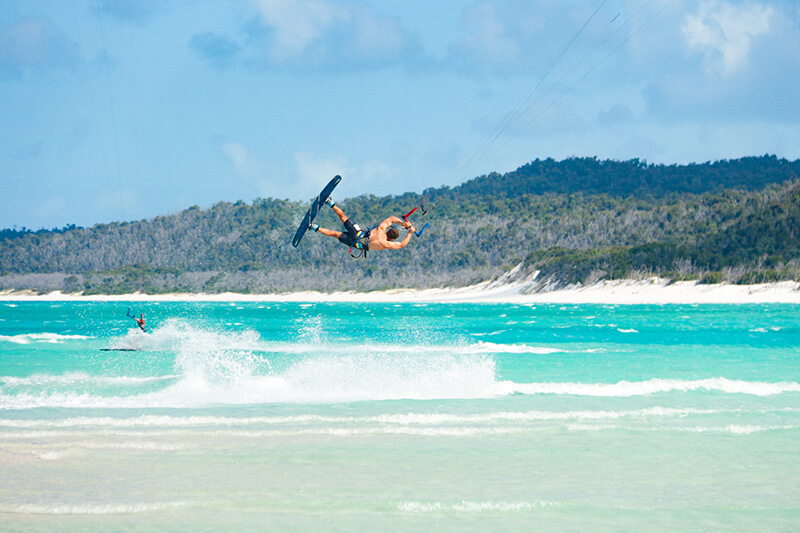 The problem with going on a kite trip with no photographer is that you are responsible for everything. When it was time to swap the SD cards and load footage onto the hard drive, we double checked all was downloaded, and Katie formatted the cards to set up for the next activity. Except this time, the double check wasn’t enough and all our drone shots had vanished into thin air. Luckily, a restage fixed the issue and we even caught the whales a second time round. But a slightly bad streak of luck had begun. Not to say that things got really bad, but there were a few more adventures to come… First a storm rolled in and we had to set three anchors to stop the yacht from banging into any of the outcrops surrounding us. Then Captain Dave’s foot got severely infected from rope burn and coral bacteria, a nasty cocktail which meant his foot pretty much doubled in size. Next, I needed rescuing from a two-meter lemon shark downwind of our anchor, then we nearly lost the drone as it ran out of battery, and then Katie lost a GoPro in the ocean – I tried to help her find it, and instead copped my foil mast to the eye. But surely that was the end of our unlucky run? 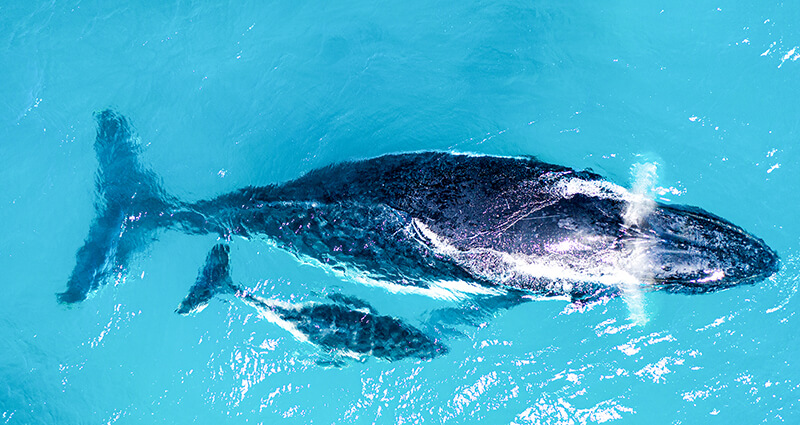 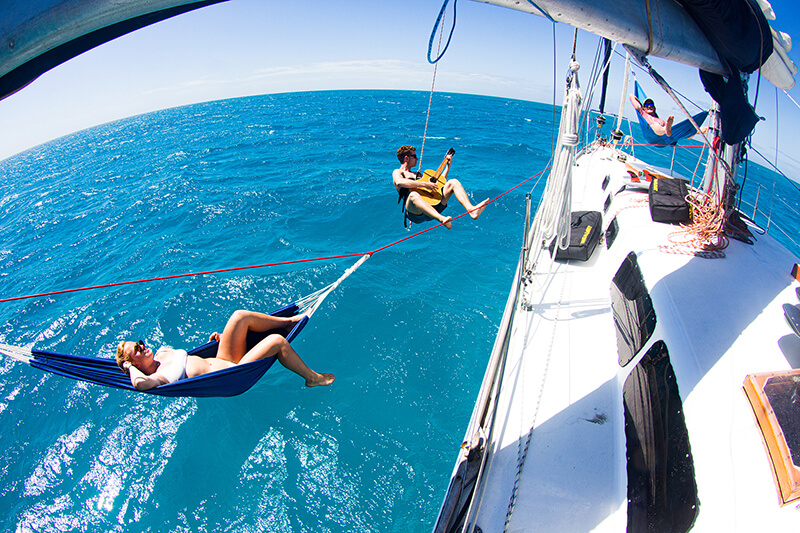 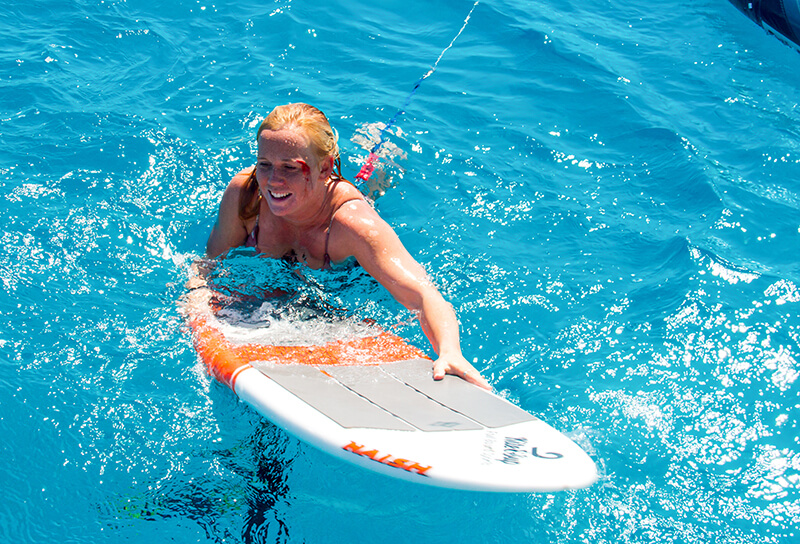 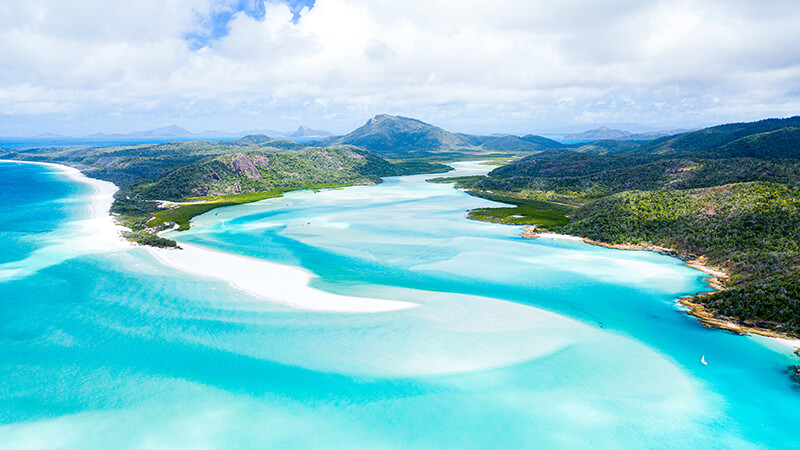 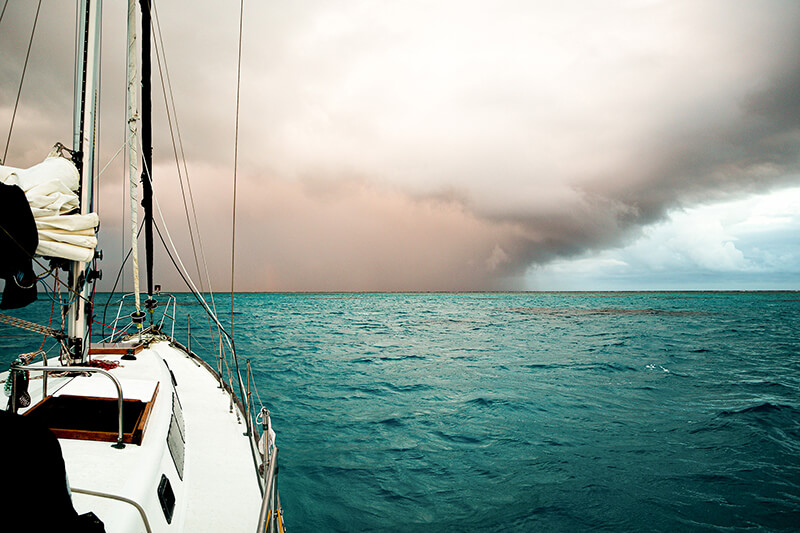 Well. No… The run of mishaps continued – a few rums at sunset turned into a night sail, despite Dave telling us something always goes wrong on a night sail. We learnt two things that night: first, never jinx the night sail, and second, something always goes wrong on a night sail. Within a minute of Dave’s helpful (and unheeded) advice we snapped the tiller… Patience, expertize and a few more rums later, the tiller was fixed and we sailed to our final destination: Whitehaven. Known for its blinding white sands and turquoise waters, Whitehaven Beach is quite the tourist attraction, but luckily for us, Covid restrictions meant the beach was practically untouched. We were greeted with blues in every shade you could imagine, sand bars to boost over, butter flat water to slide through, friendly stingrays to glide over, and water so warm, bikini kiting became a thing. While temperatures dropped to 0°C at home, we were struggling to keep the sweat at bay in Queensland – and this was supposedly their winter. This was paradise.

A crazy couple of days kiting this place would have you questioning the meaning of escape. Hopefully the photos do it justice, or you’ll just have to taste our slice of northern Aussie paradise for yourself one day. With maybe a few too many sandbar crashes, too much sun, and bellies full of homemade sushi, we packed our ever-deflating dingy for the last time and headed back to the yacht for another sunset sail home. You can bet we ran into mishap yet again as the sky turned from pink to black and we hit a squall which set our yacht into race mode. Rain drenched our dry clothes and two-meter waves joined the party, just to make sure we were properly wet. We even thought we’d lost Alex overboard for a minute. What’s that saying? You don’t find the rainbow without a bit of rain? One thing’s for sure, the rainbow, be it metaphorical or not, is always worth the shower. Amongst all the craziness in the world at the moment, and the havoc and unease caused by a pandemic, we managed to escape and find our own little paradise for a while. Whether you’re reading this between sessions at the beach, or are locked in your bedroom after Netflix series marathon number 27, remember to never cease to let your imagination escape reality. And one day you might end up sailing to paradise.

A last word of advice before you do set sail on your own ultimate escape: quadruple check your content is downloaded before formatting any SD card; don’t tell stories of how things go wrong at night, because you’ll most likely jinx yourself and exactly that will happen; don’t worry that you’ll capsize, no matter how far the yacht tilts sideways, but know that, yes, you will get seasick; And finally, if you think you’ve definitely got enough snacks, think again… ■