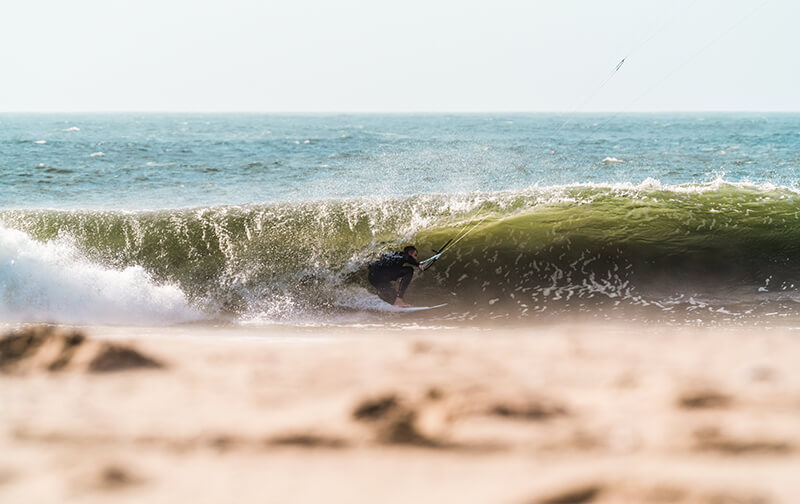 The images of dusty Namibian desert barrels stretching for insane distances were burned into the minds of Steven Akkersdijk and his travel companions, and even the thought of a 20 hour drive into the barren wilderness wasn’t going to hold them back when they saw conditions aligning. So they hit the long, straight road into the desert…

On this particular trip, Josh told me he has a rule for himself: “Never stay in a place for a shorter time than you’re traveling to it for.” With a good 40 hours of driving ahead and a plan to only stay a couple of days, we were pushing that rule.

You might ask yourself why someone would decide last moment to book a flight from Durban to Cape Town, hop in to a car and drive another 20 hours. Well, the big reason for this entire adventure was a forecast that’s really rare for the African summer. A big swell was about to hit the Skeleton Coast in Namibia, and it would push life into a break that a few of us have always dreamed of kiting!

For me, the travel started in Cape Town. After picking Willow-River Tonkin up from the airport, we met up with Joshua Emanuel and Lorenzo Valenti to pack the car for the drive. A big topic that night was: “How many boards should we bring?” The wave we were aiming to kite is renowned for snapping boards, so the last thing we wanted was to be stuck in the desert at a perfect wave without any boards to ride. In the end we brought about four boards each, as we had no real clue what to expect. This meant that the pickup was packed to the roof! 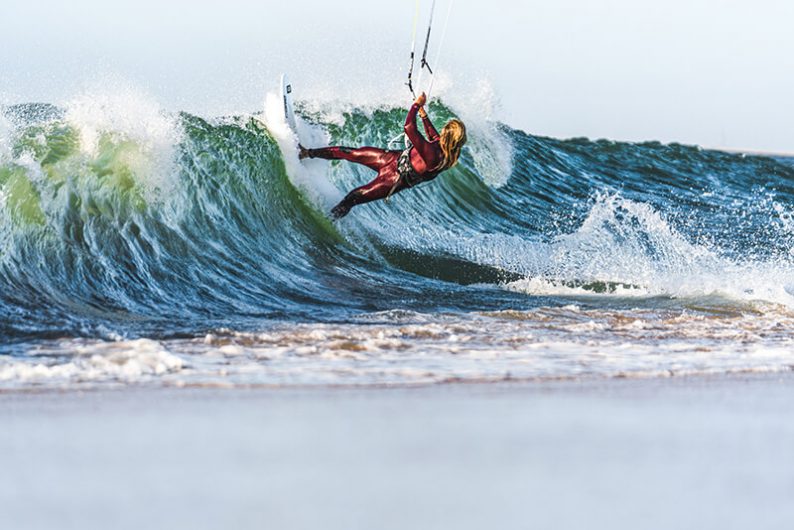 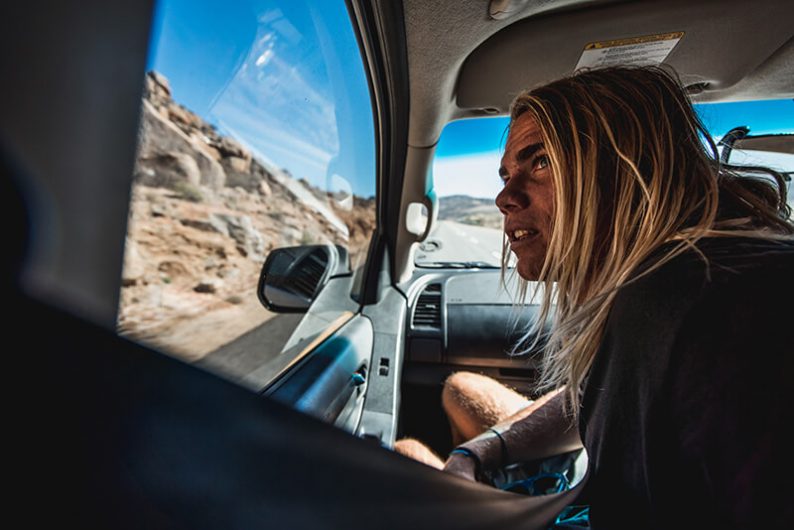 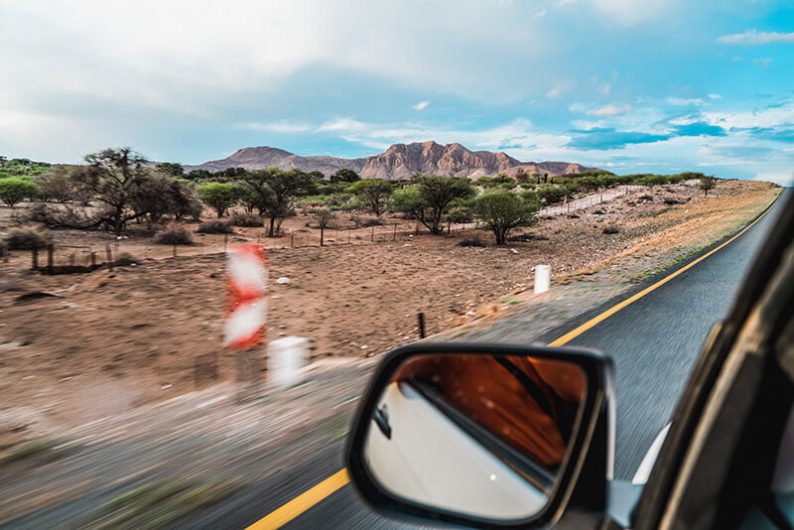 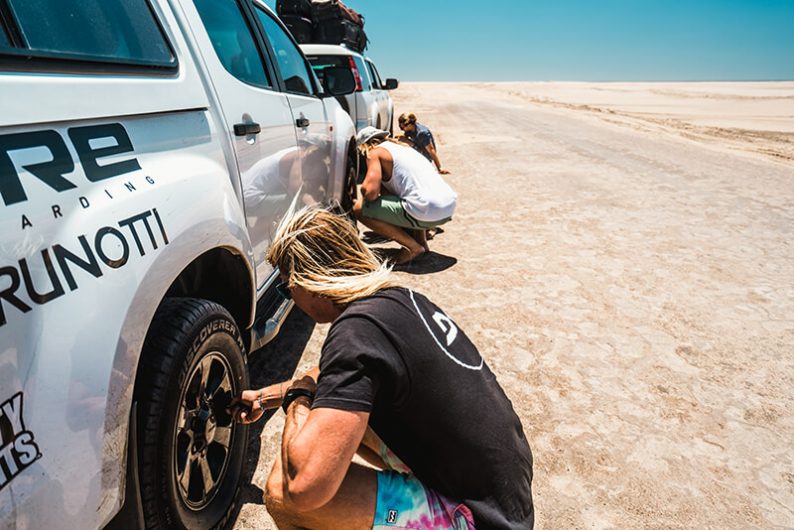 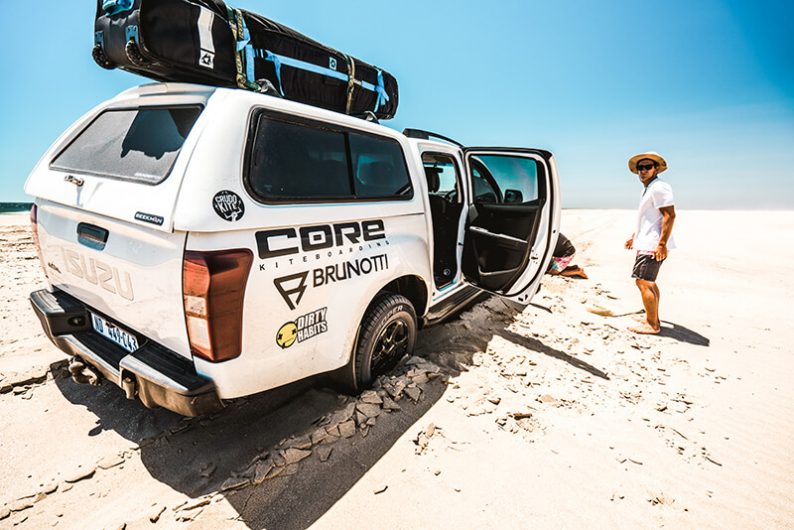 Our trip started at 4am from Cape Town towards Walvis Bay in Namibia. At this point we still had 1800km and about 20 hours of driving ahead of us. The first part of the drive through South Africa to the border consisted of a highway through the hills and mountains. This rapidly changed when we crossed the border into Namibia, with just a straight road running through the desert. I can honestly say that I’ve never seen such a long, straight road in my entire life! Sometimes we would go for 20 minutes without seeing even the slightest bend in the road. After multiple stops to fuel up and a big push for the last part of the drive, we managed to arrive at our hostel in Walvis Bay at midnight.

The next day was filled with excitement as we were going to get to see the spot for the first time. This would also mean that our driving skills would be tested to the maximum, as we only had a pickup with rear wheel drive. Good luck taking that through the sand…

Donkey Bay, as the wave is called, lies 10km away from Walvis Bay, but to get there you’ll have to drive past the salt pans and over the beach, which normally takes you about 45 minutes in a 4×4. As we arrived at the beach, we deflated our tires and got ready for some proper sand driving. A friend of ours led the way and took us straight into the soft sand on the beach… It didn’t take us long to get stuck up to the axels in sand, after which he had to tow us out. From there on the sand got a little bit harder and we managed to get to the spot with all our gear.

As we arrived the wind was there, but the swell hadn’t shown up yet. Every now and then a set would roll in where the waves were breaking in ankle deep water only a couple of meters away from the beach. This didn’t stop us… We’d driven 20 hours to get there, so we all went out for a little fun session.

The following morning our alarms went off in the darkness, as we wanted to be there with the sunrise. We arrived at the spot before the sun was up, with a light morning mist in the air. It’s so surreal to be at a spot where every 15 minutes a set comes in that makes the water come to life, creating hollow waves that run for almost a kilometer. The surroundings definitely make this spot even more mystical. Except for a jackal, loads of seals and pink flamingos, there is hardly any life to be seen on this peninsula and you can forget about finding shade as there is no vegetation whatsoever. In the distance we could just make out the twinkling lights from the harbor at Walvis Bay, and a couple of headlights driving down the beach.

The mornings are mostly good for surfing as the wind only kicks in later, so that’s exactly what we did. As this wave is so fast, the hard part is to actually catch it and not go over the falls. We already heard about the famous current before we got there and quickly realized that you need to catch a wave in the first three sets. If you didn’t manage to do that, you got rewarded with a 300m walk back, as the current carries you down the beach at about walking speed. In the end – having snagged a couple of waves each – we headed back to the house for some lunch and to prepare for the afternoon kite session.

》The wind is in

Returning to the spot we had the wind and waves. We quickly pumped our kites to get out there, to squeeze into those little barrels that rolled down the beach. It didn’t take long for us to realize that you need a decent amount of wind, as the current is about four knots close to the beach. This meant we ended up racing out when we saw a set on the horizon, and walking back upwind after we caught the wave. As the wind starts off very side-shore, we often ended up with slack lines in the barrel, and as we were still trying to figure out the spot our kites got eaten up multiple times by these mutating barrels breaking on the sand. On several occasions I thought we could say goodbye to a kite, but miraculously none of the kites ripped. Although we did have to unfold them from a pretzel-like shape a few times… 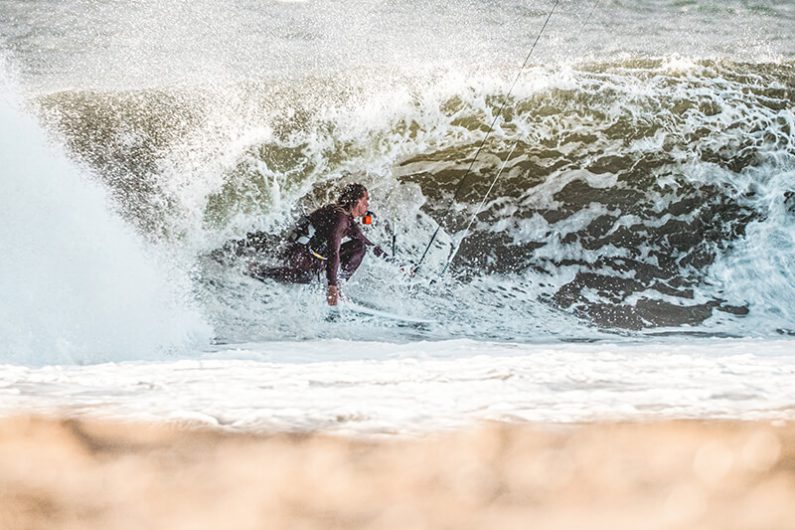 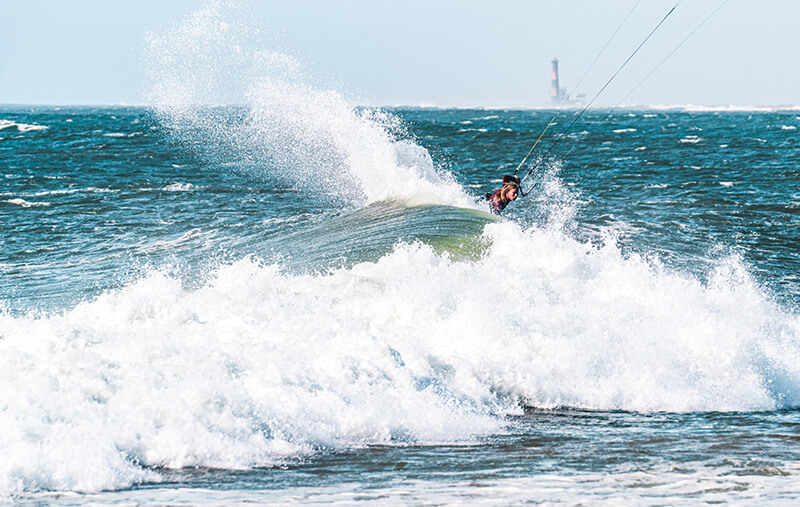 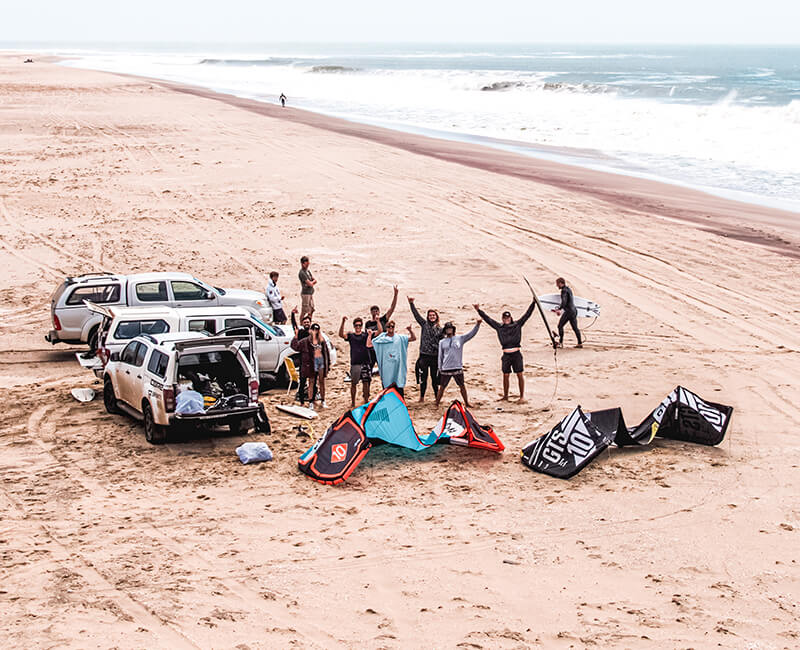 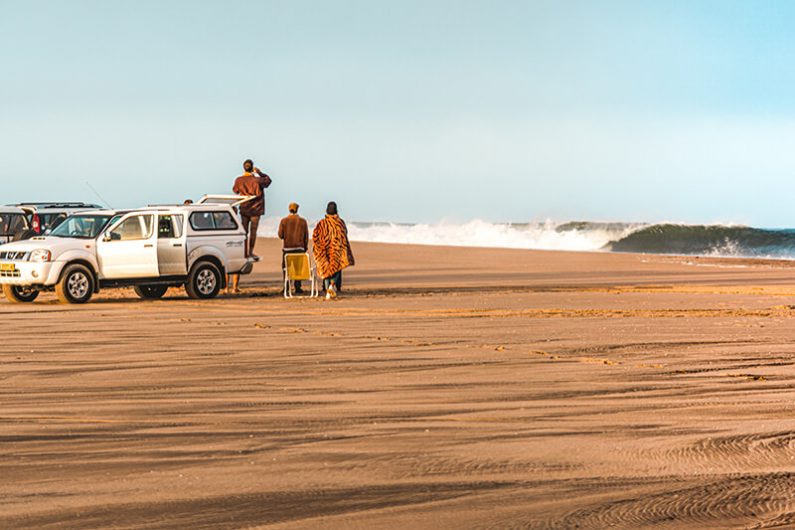 Riding this wave is truly challenging. We’ve all seen those crazy barrels where they manage to go deep and stay in for about 15 seconds. Every time we stalled for the barrel it completely destroyed us, which resulted in multiple bruises and wetsuits full of sand.
When the wind turned slightly more offshore towards the evening, we started to figure out how to ride the wave. Stalling for a section wasn’t really the way to go as it would be so hard to gain speed in the barrel and make it out. For me it was a combination of steering the kite down and a short snappy bottom turn to get just in front of that barrel. In the same moment I would drag my arm in the water to slowly let the wave overtake me. To be fair, I’ve never been a barrel master and even though all the other guys came to this spot to get barreled out of their minds, I was still hoping I could slam some turns on this racetrack of a wave. This proved to be harder than I expected, but after catching one of those dreamy waves that just sucked up and started throwing a thick lip above my head, I was convinced. My full focus turned to barrels (with the occasional little turn here or there). 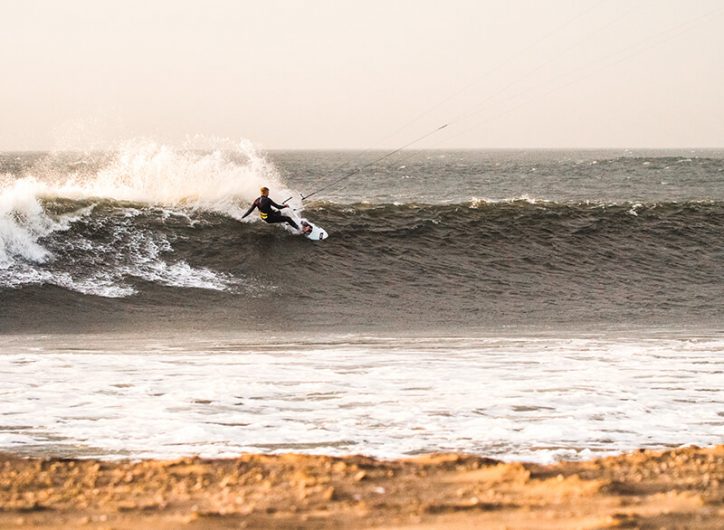 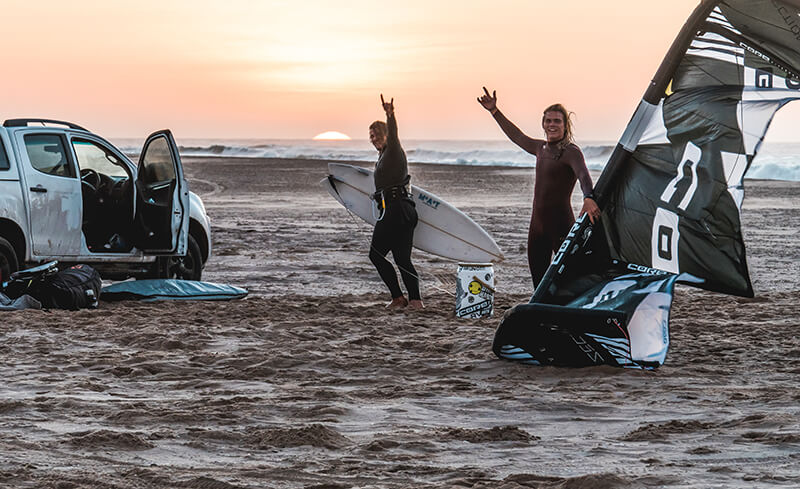 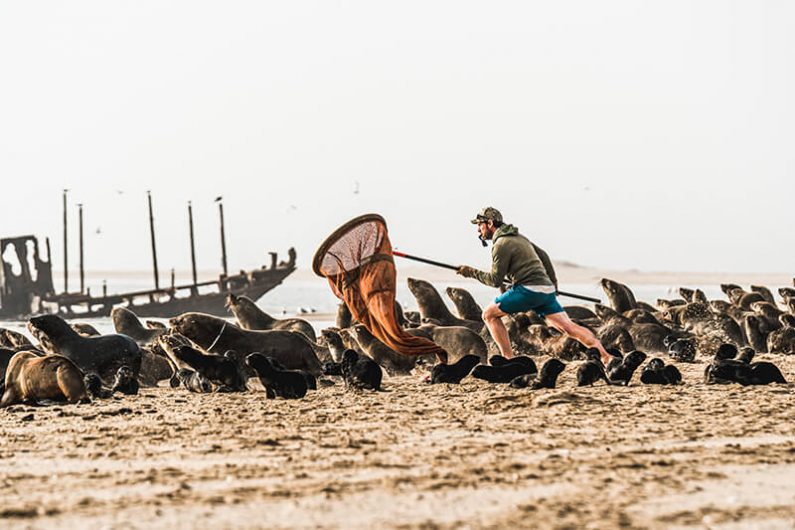 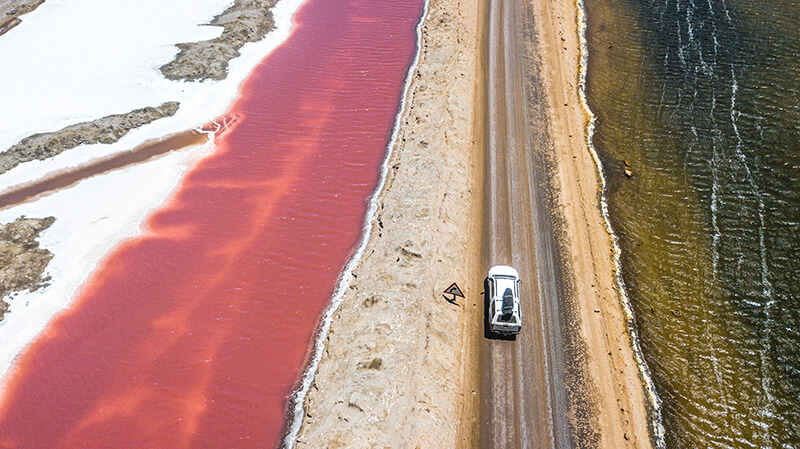 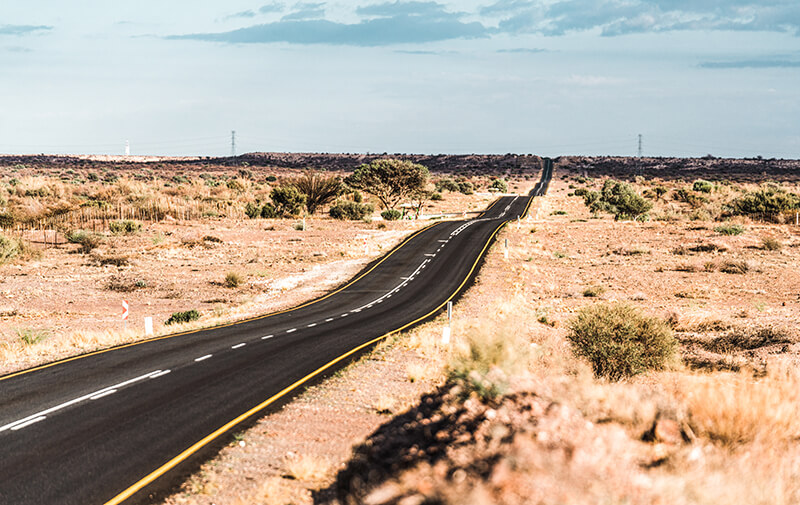 We went on for three days like this, morning surfs followed by afternoon kite sessions. Often the last hour of the day would just be next-level firing, with offshore winds and long peeling waves. Often we would end up leaving just after sunset, making sure we’d made the most out of the day and leaving the water with huge smiles on our faces, but also knowing that we still had to drive the car back through the sand…

On one of the days we joined Naude Dreyer – owner of a kayak tour company in Walvis Bay – to see the seal colony. In his spare time he patrols the peninsula searching for seals that have become trapped by fishing nets or other man-made hazards created by the fishing industry. We found a seal that had a packaging strap stuck around his neck. This can be a big problem, especially when the young seals grow and the strap becomes tighter and tighter. As the seal was quite big, Joshua helped Naude catch the seal in a big net so that he could remove the strap from his neck. It was also crazy to see these animals getting into it on the beach. They all seem so nice and cute in the pictures, but they can actually be super strong and aggressive when they feel threatened and have nowhere to go.

After three long days it was time for us to drive back to Cape Town. We left at 2am and managed to finish it in 19 hours. This trip has been a dream come true for some of us and an eye-opener to others. Just like the rest of the crew, I would love to go back to this spot and ride some more barrels. Next time I would make the trip a little longer to see a bit more of Namibia and explore other spots in the area. Even through the spot is way more accessible than I initially thought, your skill level needs to be quite high to ride the spot, and the chances that you’ll get all the conditions to line up are very slim. So all you can do is keep an eye on the forecast, and make that last minute epic drive when the conditions turn on.

This feature originally appeared in TheKiteMag #36. To subscribe, head here. 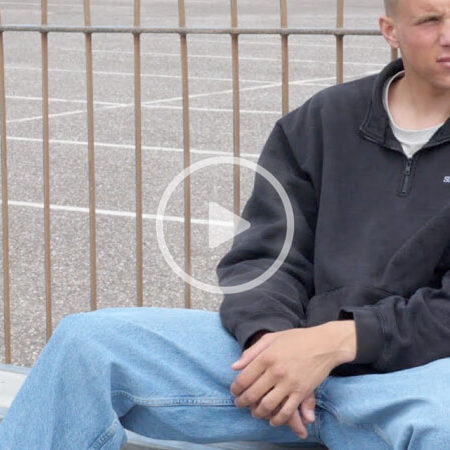 Colin Colin Carroll flexs his diverse skillset by moving into the realms of 'fly-on-the-wall' documentarian for this great profile of Tom Bridge. 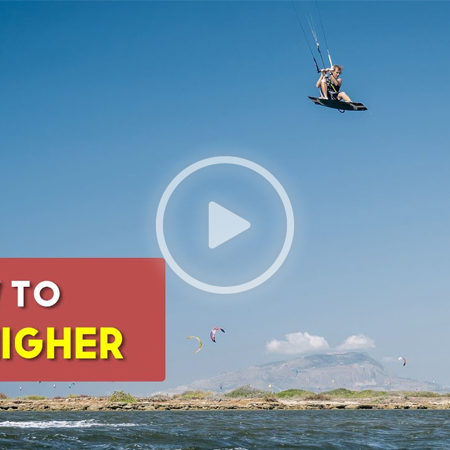 How To Jump Higher

Learn how to reach the sky with Alby Rondina himself.