The Queen of Big Air 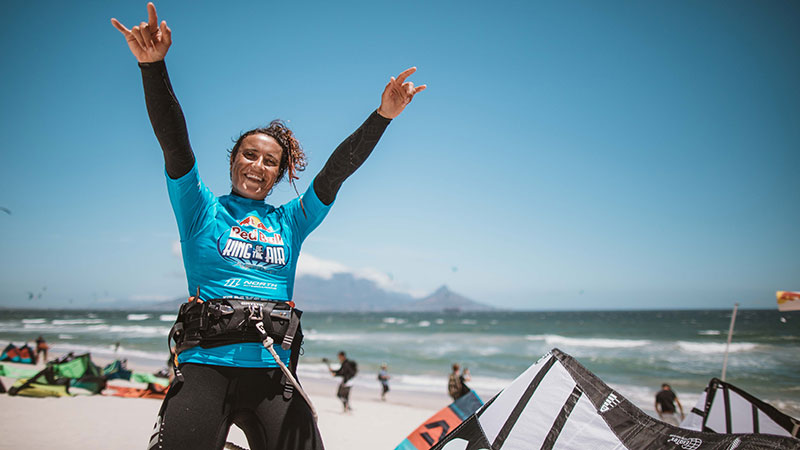 When I’m looking at female kiteboarding, there are a few women who stand out for their incredible riding abilities. These are the girls that go on the water and blow your mind with their tricks and powerful riding.

For a long time this list has included riders like Bruna Kajiya, Jalou Langeree, Mikaili Sol, Pippa van Iersel and Hannah Whiteley. Then a couple of years ago another girl just came out of nowhere and blasted her way to the top of that list. Angely Bouillot made such a big impression on me that I think my jaw actually dropped (and I ate sand for the rest of the day because it was so windy).

This moment was at the product shoot for the CORE GTS5. We drove over to a super windy beach and decided to bring Angely so she could see how we shoot, and we were also super curious as to how she was riding and if she could perform in front of the camera.

There were a few line length options to choose from, ranging from 10m to 18m lines. At shoots and in general I can say that most CORE riders really enjoy the shorter lines as it gives you a big yank and it will catch you when it’s way below you! Angely took the shortest option possible (10m lines) which she rigged on a 9m GTS5 in 35 knots… When she pulled her first loop I thought we’d be taking her away on a stretcher. The kite got right in front of her and the loop pulled her straight in to a rotation. Miraculously she managed to get the kite back up and come down unharmed (even though she lost her board mid jump).

Where most people would call it a day, she went straight back out there to stick the landing on her next loop. After a few more crashes and landings she came back to the beach: “I don’t understand, every time I land the chickenloop unhooks.” At that moment we noticed her chickenloop didn’t have a donkeydick. So a quick tip on her downloops later, she went back out there and got the most amazing megaloop shot I’ve ever seen from a female kiteboarder. From this moment on I was so impressed with this girl that I wanted to know what’s going on in her head when she’s out there. It was time to sit down and put a few questions to her…

When did you pull your first loop?

A few years ago I entered a competition in Leucate. There was a prize for the best crash, so this was the perfect timing to try something new. A friend of mine explained to me how to do a kiteloop and I went straight out there to try it. Of course this ended up in a big crash as I had only been kiting one month a year at that time. But the crash won me the competition!

What is your favorite location for kiteloops and why?

There are so many good places to kite. But if the location combines flat water with strong winds and an occasional kicker wave, I’m in my dream spot. This winter I’ve spent most of my time in Cape Town which I absolutely love! There are good vibes all around and you can find some really strong wind. After Cape Town I went to the Kitefest in Argentina and I also really enjoyed this place. I even landed a kiteloop one footer for the first time there.

Do you have any particular ways of getting yourself in the zone for those super windy days?

When I see good wind in the forecast I just want to get out there. I already get excited the day before and when I finally reach the beach I get straight on the water. In the beginning I’ll take it a little bit slow as I want to get used to the conditions. But after that it’s full power!

Which kite and board are you happiest riding for those super heavy days?

When the wind is ON I really enjoy riding the CORE GTS5 8m on 20m lines and the XR5 on 22m lines. These kites both have their own specialties that I really love. The GTS5 will pull kiteloops that you won’t easily forget. It’s like pressing the “launch” button on a rocket! When I go out on the XR5 it just takes me up and I never come down. When you think that you’ve reached the highest point, it takes you even higher! In combination with these kites I ride the Carved Imperator. This board is so light that it actually feels like you only have flip flops on your feet…

What do you think about the Big Air competitive scene for women at the moment?

I believe we’re only at the beginning of a competitive Big Air scene. There are so many girls that can go big, but I think we can go way bigger. At the moment we just need more girls to compete and train for the Big Air competition. When we have more girls competing I also think the level will shoot up.

What was your biggest “oh shit” moment?

I was kiting in Morocco with side offshore conditions. The waves were huge and after an unsuccessful attempt to evade one of these big rollers, I got washed in the biggest washing machine you can imagine. I crashed my kite and was unable to relaunch it. The wind took me further and further away from the beach where the water turned pitch black. When I looked back at the beach and just saw it getting smaller and smaller I knew that I was in trouble. Luckily for me there were three Moroccan windsurfers who called a boat that came and picked me up. In the end I spent three-and-a-half-hours in the water and when I came back to the beach one of my friends thought I had died for sure.  In the end all turned out well, but it scared me a lot.

The highest jump I made that was recorded by WOO clocked in at 23.8m. It was a session that I shared with Joshua Emanuel. This is already a while back and I’m sure I’ve jumped way higher recently, I just haven’t been riding a lot with the WOO.

I heard you have also been speed riding with the kite. Can you tell me when and why you started? What is your top speed?

I started kitesurfing because a friend of mine said I should enter the speed competition at Mondial du Vent in Leucate. He taught me how to ride a speed board in two weeks so I could compete, and I got a third place. Six months after this competition I competed again in a different event where I managed to get first place! There are quite a lot of riders in the area where I’m from that try to go as fast as possible, this made it very interesting for me to try it as well. My top speed is 49.27 knots, which is 91kmh.

Do you have a male and female idol in kiteboarding? Who and why?

When I started kitesurfing I was not really checking the internet. I just wanted to get better than my brother who was also kitesurfing. In the end this didn’t turn out to be that hard! After passing by brother I was always looking at the people I’ve been riding with and trying to learn from them and I have continued riding like that with lots of great riders to learn from in Cape Town.

In Cape Town a couple of girls and I organized the “Queen of the Air” competition. This was a huge success for the first edition as we had some really cool girls joining the comp and the vibes around it were just awesome. We had an entire crowd watching us from the Mystic house whilst the girls were sending it. Not only was it an awesome day where I met a lot of amazing and supportive people, but I also won the competition.

I would love to involve more girls in extreme kiteboarding and help organize some female Big Air events. Next to that I would really like to compete with the guys in the Red Bull King of the Air and the Red Bull Megaloop.

This article originally appeared in TheKiteMag #31. To subscribe, go here.