Go back to Latest News 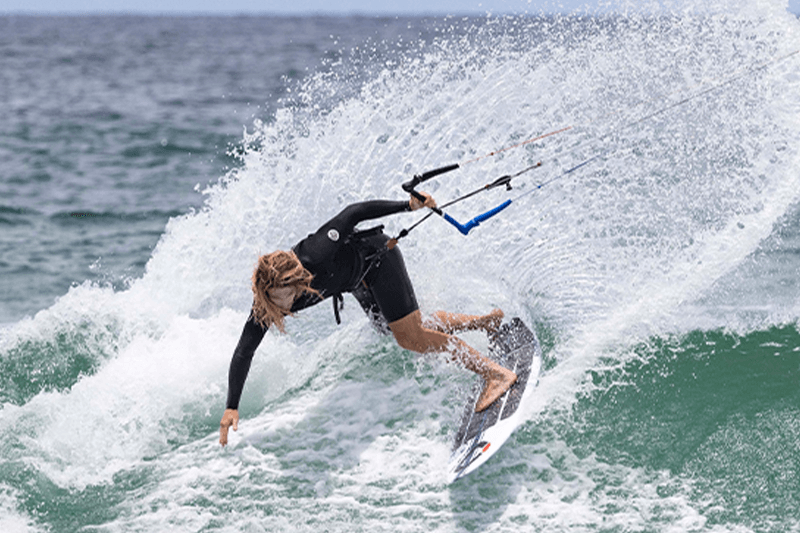 There’s a 4-day fun fest down under and it’s called The Merimbula Classic.

Competitions all around the world are defined by one thing: a result. Well… not this one. In the unlikely case you have heard of it, you’d know the Merimbula Classic is all about having fun. For those of you who are unfamiliar, let me, Peri, lay down the law for you.

There’s a small town on the East Coast of Australia called Merimbula. A quiet, pristine and beautiful location… relatively dormant for 12 months of the year, except for one weekend where the town comes alive for this historic competition. The Merimbula Classic is a 4 day, action-packed wind sports competition that has run on the last weekend of November, every year for the past 40 years. 2022 saw the 40th anniversary of this particularly different gathering, and with that there’s a story to be told.

The Merimbula Sailboard Club was formed in 1980 by a handful of keen, local wave sailors. Many of these founding members are still active and loving the wind and waves that Merimbula has to offer. Alongside many hardworking and dedicated salty dogs and ladies, are the masterminds of this Classic; Henry and John.

The Merimbula classic has been running consecutively since 1981 and Globally is the longest running event of its type… I guess “fun” keeps the people coming back.

Sponsors such as the dynasty that was/is MAMBO and Corona have supported this event from the get go, which in my opinion, is a pretty great feat for a couple of Salty Dogs with a passion to take their competition to the big leagues.

This competition has produced some talent over the years, too… ex- World Champion and hugely influential Ben Wilson, grew up in Merimbula and claimed his first Classic Title in 2004, my very first Merimbula Classic. I was 4 and Ben Wilson was just starting to make his mark on the kiting world. The likes of Scott McKercher (windsurfing), Kai Bates (SUP), Airton Cozzolino, James Carew and many more familiar names have been through this event. Everyone claims it’s the best of its kind.

I competed in my first Merimbula Classic at the age of 14 alongside a great group of groms, including James Carew. I was the only girl under the age of 25 at the time and I just remember thinking how amazing it was to be in a place with so many people that appreciated windsports. When you grow up only kiting with your dad and a handful of older blokes, the future for girls in an extreme sport like kitesurfing back then looked bleak. But I found a family down there, and it made a huge impact on my life. These groms are still some of my closest mates and I will cherish that Merimbula brought us together, forever.

I’ve got to hand it to the Merimbula Classic, if it wasn’t for them I wouldn’t have fell in love with the sport as much as I have. I wouldn’t be a World Champion either,  for that matter. You could probably ask Ben or James the same thing and get a similar answer. 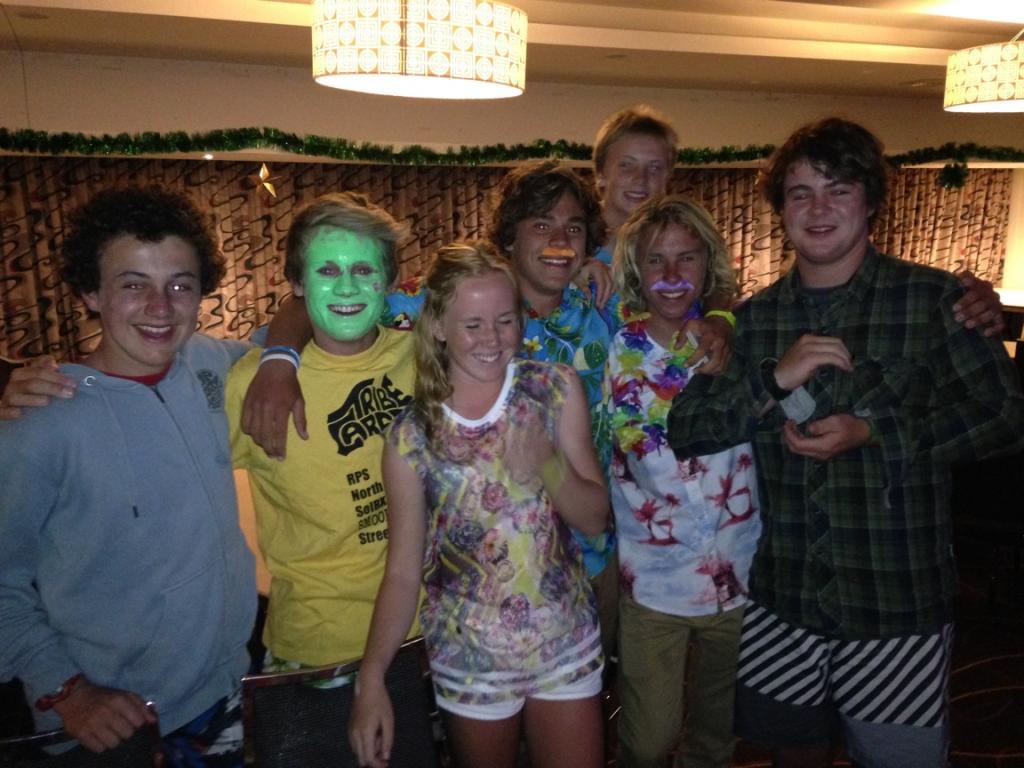 There are two simple rules of this event: Don’t whinge and have fun. There aren’t any heats, no visible judges; no pressure, no failure. It’s kind of a free for all… most definitely chaotic at times, but it just works. Over the years with the introduction of many new sports, the event has grown into a wind-sports fanatic. First came windsurfing in the 80’s, by the 2000’s kiting became a thing and there were lines going everywhere, by 2010 the mighty SUP was introduced, and now coming back after covid, wing foiling and prone foiling have joined the club.

Over the 4 days everyone heads out onto the beach and showcases their best manoeuvres. The kicker here is that you never know who’s watching you in or out of the water, so good vibes and killer moves are a must. Each day we’re welcomed with an included BBQ, a vitally important part of the event… I actually think the BBQ is what keeps us kicking each day. Then, every evening, there’s carpark beers, pub catch ups, local food markets and a whole lot of laughter and ‘bantz’ (or banter/conversation for you non-Aussie folks). 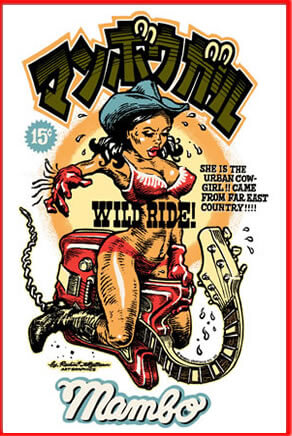 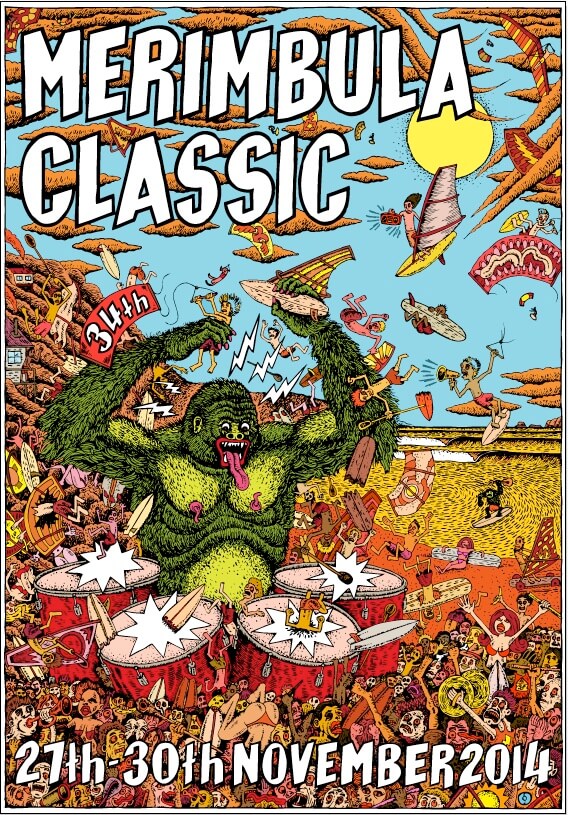 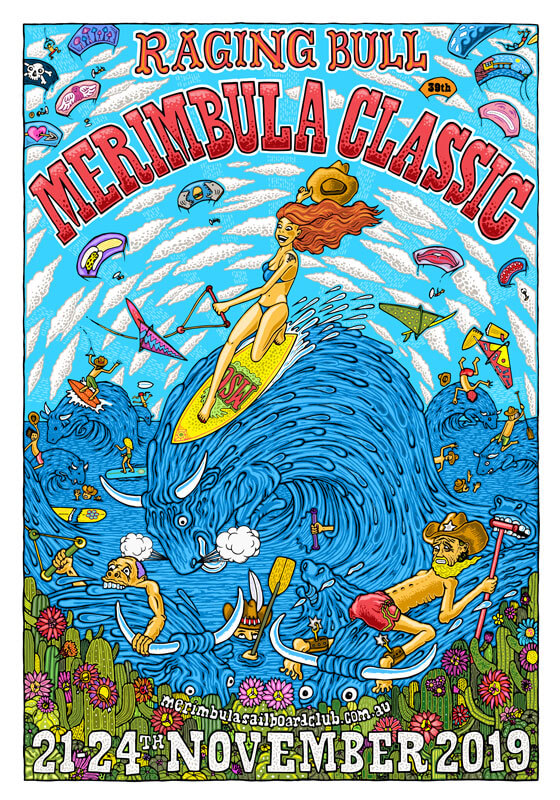 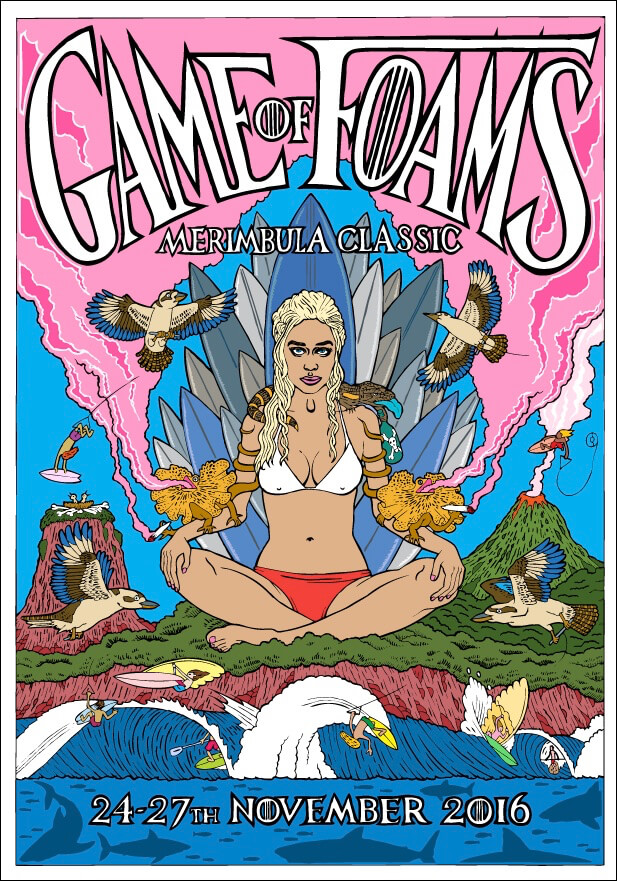 Some may claim the Merimbula Classic is about the water time, and others might tell you its about the party, but you can’t have one without the other. As Saturday night rolls around, the dress-ups come out and we trot up to the club for a boogie. This isn’t any ordinary party, you see, it’s themed accordingly to the event, something different each year. For the 40th anniversary, the theme was 4x T’s (tutu’s & tiara’s, toga’s & tie’s). Generally, the local thrift shops get a work out, as does the $2 shop for all things funky themed. We drink beers together, mosh together, rock out to the live band and have an absolute blast doing it. 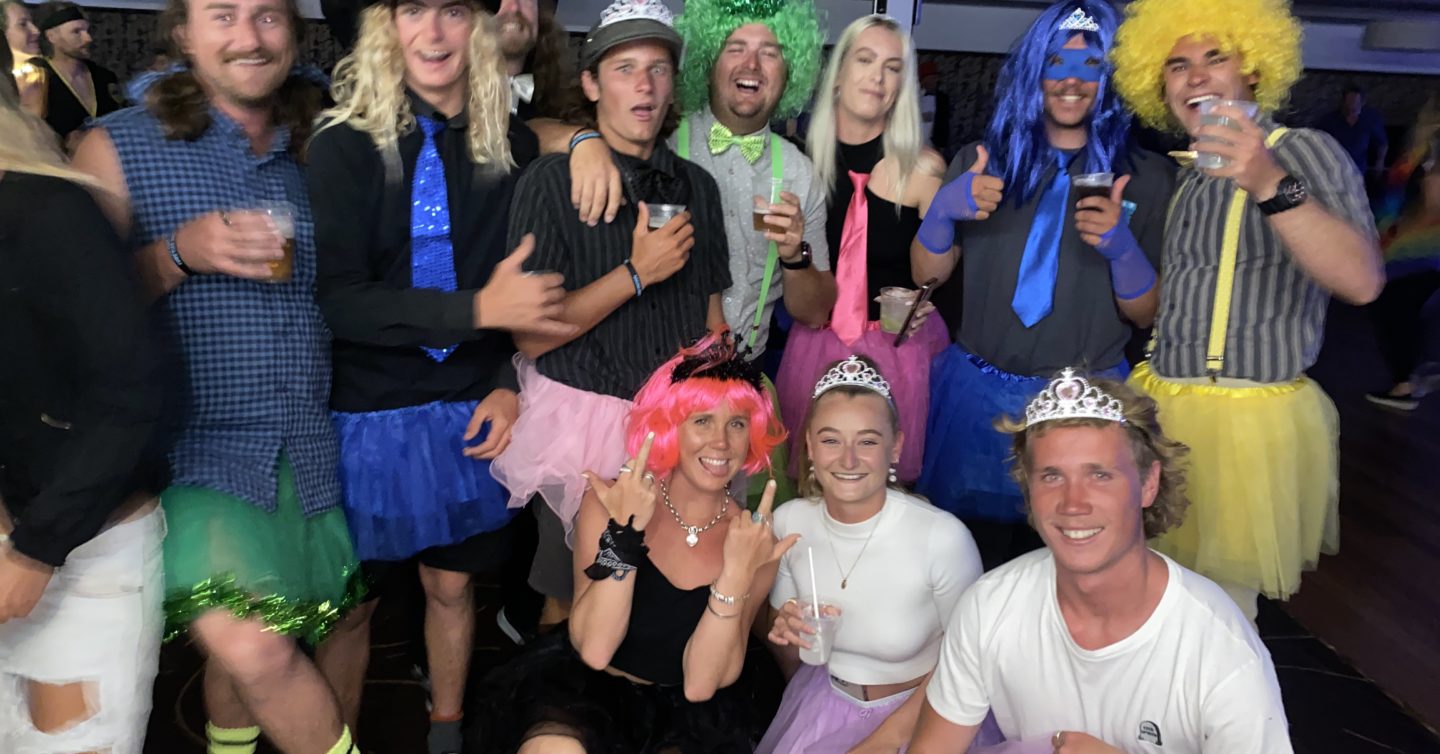 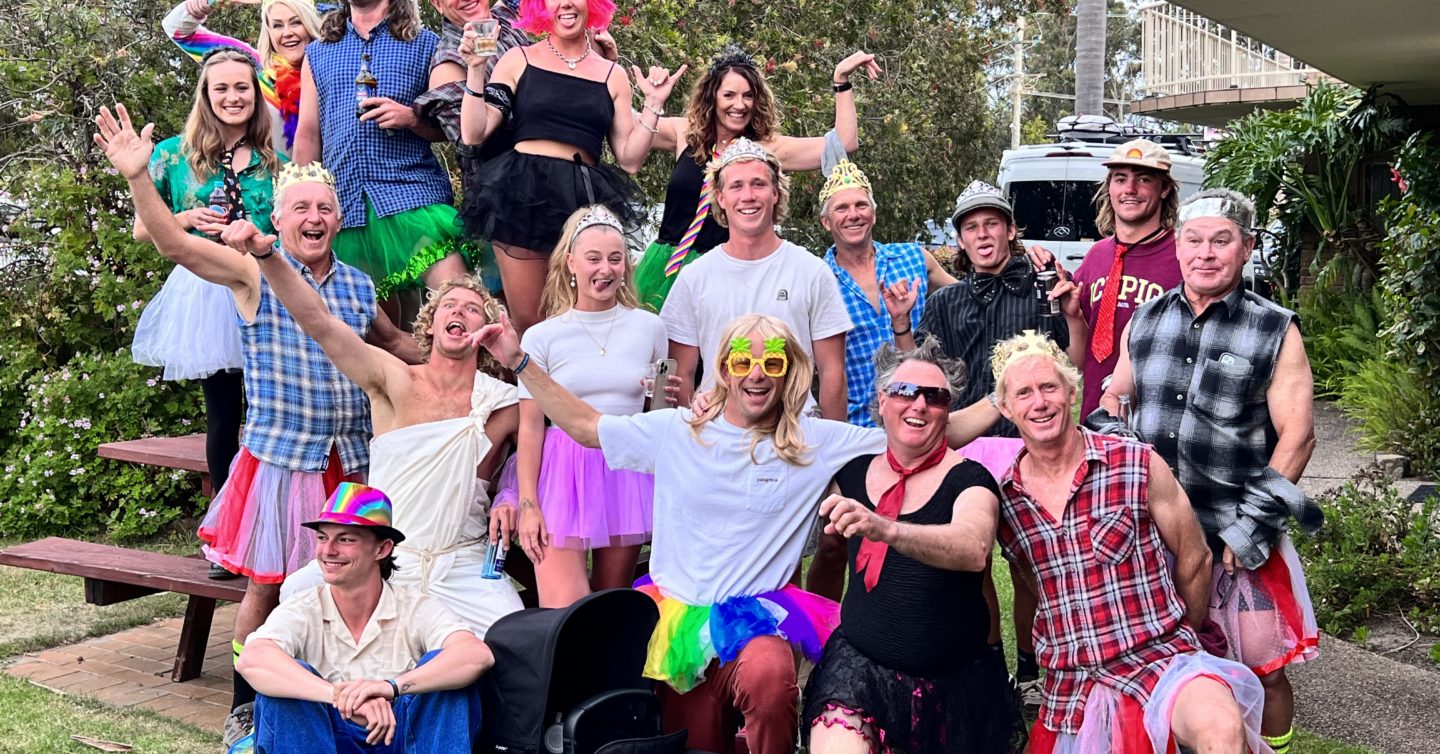 Slightly under the weather from a big shift on Saturday night, we cruise through our last day of the competition on Sunday and make the most of the solitude the ocean can offer us. Before we’re all sent back to our homes from all over Australia, some that take 2 days of driving or a 5 hour flight; we’re rewarded with a huge ceremony full of laughs, trophies and up to $50,000 worth of prizes (which every competitor gets a stab at). Because there isn’t any heats or known judges, its all very exciting when Smythy calls out our names from 1st 2nd and 3rd in each division, divided by age group and discipline.

Some lucky people go home with new kite quivers, new SUP’s or foils, accomodation in Byron Bay or even the infamous Namotu Kite Week that Ben donates to the “Kiter of the Future”. However, regardless of any materialistic prized possession, all of us go home with memories to last a who 12 months before the next Merimbula Classic rolls back around. That’s my version. If I were you, I’d book a flight, train, boat or start walking to make the 41st edition next November… maybe you can find a version for youself.