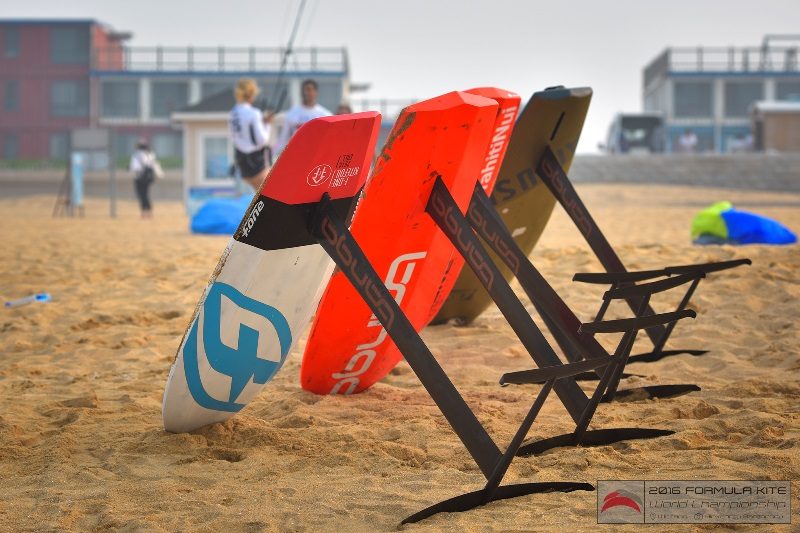 Wrapping up in China, where conditions varied from the lightest of puffs to strong breezes had riders changing positions in the rankings day to day, but in the end: 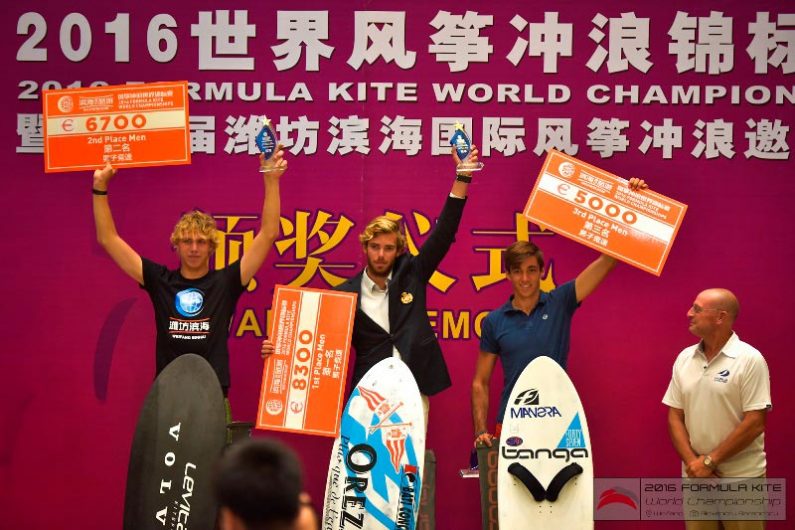 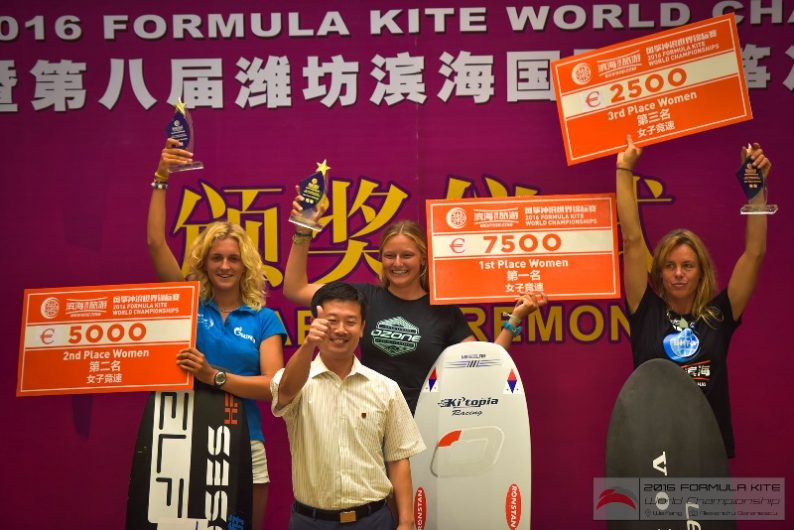 Nocher began the day with a healthy lead but knew he had to keep clear of trouble in the “platinum” fleet’s four races with only the top ten men. In the end he notched up two bullets and two fourths in the 6kts to 7kts breezes that were barely sufficient to clear the heat haze that shrouded the track off Joy Sea Beach, Weifang, eastern China.

But as much as Nocher’s hat-trick of world titles is a stunning feat, the victory of US foiling prodigy, Daniela Moroz, just 15, was utterly remarkable against such a classy and tactically astute women’s field.

Moroz had started the final sixth day of competition on equal points with the reigning world champion, Russian Elena Kalinina, 18. Moroz had appeared to have no answers to the Russian in the light airs of day five and trailed in second in each of the four races. 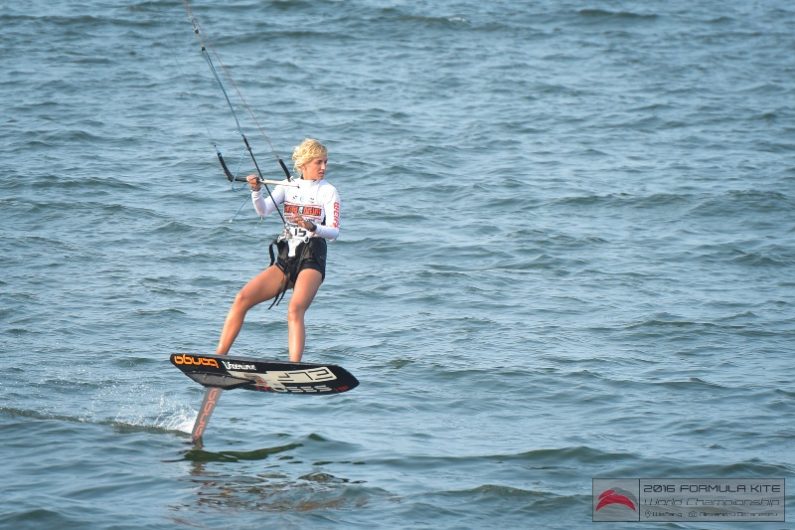 Kalinina dominating in the light air of Day 5

Yet in the last four races in similarly light breezes Moroz found another gear. On her Ozone R1V2 kite and Mike’s Lab foil the American completely turned the tables on Kalinina, with a perfect score of four bullets.

In the day’s second contest on smooth waters Kalinina crashed hard on a drag race to the line battling against Britain’s Steph Bridge — who ultimately took the third podium spot — after catching some debris. But even then Moroz was long gone, a story repeated in every race. 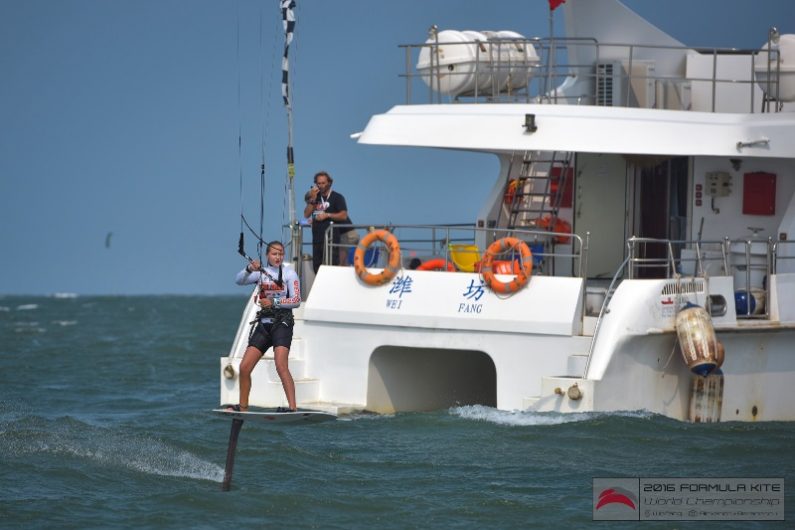 “That’s pretty crazy,” said a clearly elated Moroz, as she waded ashore. “It haven’t really got it yet. I’m pretty happy. It’s so cool. I was pretty bummed about yesterday. I had her in a couple of races and lost. Today I relaxed and tried to cover her and sail without any mistakes.”

The ever-unflappable Kalinina could only shrug her shoulders at the turn of events but recognised that Moroz — considered strongest in the heavier conditions of her Crissy Field, San Francisco, home spot — had discovered something in the lighter airs too.

“I was absolutely trying my best, but she had a speed advantage,” said Kalinina. “Yesterday she made some mistakes that cost her, but today she was perfect. Also, the wind was a little stronger today and more stable today, which helped her.”

For Nocher, newly on a foil by the Italian brand, Banga, the title also brings the joy of knowing he is the first to clinch the Formula Kite title since rule changes brought the class into the foiling era.

In the patchy light breezes blowing over the Yellow Sea, the super-efficient hydrofoils and foil kites came into their own, producing scintillating racing at mind-boggling speeds as the skills of the whole fleet have increased exponentially. 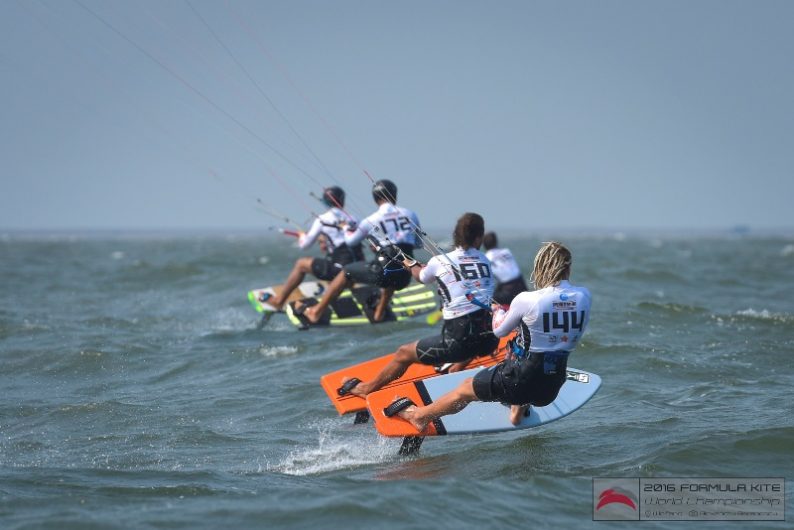 Nocher had to be at the top of his game on the final day to see off the challenge from his training partner Axel Mazella (FRA), who initially sat just a few points adrift in second overall going into the medals races.

“It was really intense today,” said Nocher. “We only had 10 in the fleet, but they’re all the best riders and we’re altogether on the course. That’s my third world title, but my first Formula foil title. So it’s really wonderful to win it.”

Britain’s Olly Bridge, 18, occupied third spot overall entering the final day and realistically knew he had no title shout. But a bullet in the day’s opening clash and a second spot were enough to push him up the order and take the second podium spot at the cost of the French teenager, Mazella, in third.

“I had a pretty good start with a win in the first race, but then I had a tangle which put me down to eighth in one race,” he said. “I’m generally pretty good on the last day and I was just trying to keep it together. I think I’m beginning to handle the pressure pretty well. I had a small chance of winning, but Nocher would have had to screw up pretty badly. So, overall I happy.” 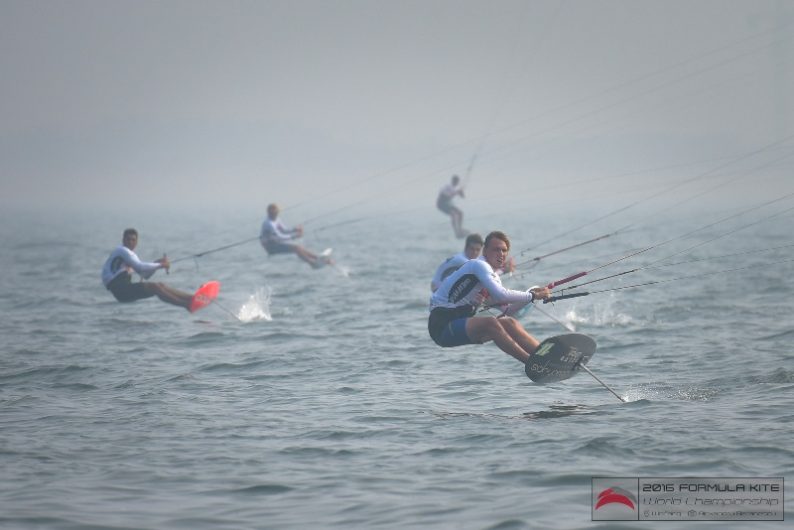 Highlights videos from each day in China here: