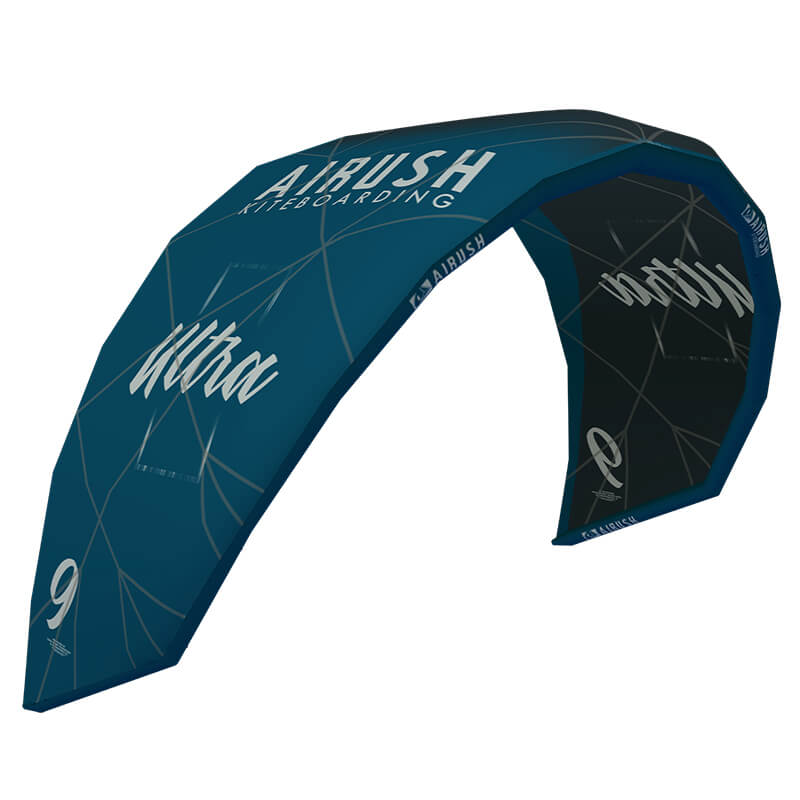 The shape of the Ultra remains fairly unique in the mono-strut realm, with a very complete arc to the leading edge and long, extended, almost pointy wingtips making it stand out against a generally flatter and highly bridle-supported crowd. It’s been a very well received lightweight kite with a cult following amongst freeride foil aficionados, and will simultaneously hold its own with a wave board.

Out of the bag, it’s a light kite, which packs down exceptionally small for a 9m. The long-established Airush load frame technology carries across from the rest of the range, and provides extra strength and structure to the Technoforce D2 canopy. This means that it won’t stretch so much over time, increasing the kite’s lifespan, and also helping control the canopy in the top end of its wind range. It also means Airush don’t have to utilize so much Dacron in the high load areas as it’s distributed across the frame, which reduces the overall weight.

The Ultra almost offers the flexibility and drift of a strutless kite, but with that added modicum of safety and reassuring relaunch ability that comes with a single-strut. Reverse launching underpowered is a cinch, which is important for a kite that is almost definitely going to be utilized with a hydrofoil. Those long tips also mean the fore and aft balance is well calibrated and within the threshold of sensible physics; there’s little chance of the kite tipping out on you or back-stalling. The drift and catch of the Ultra is predictable, with enough bar feedback to let you know how far to push its limits.

The massive tips and long bar throw (we tested the Cleat bar) mean the ability to switch off, and indeed turn up power through the bar stroke is very impressive. It can go from pulling like a little truck, to completely passive flying with no rear line tension, with very little effort or supervision required. The top end remains very composed although aggressive turning will result in a little vibration, but this is contained to the kite and doesn’t feed back to the bar noticeably. There’s a specific Ultra bar available from Airush, which is a no-cleat, minimal affair with pre-set trim for the ultimate in simplicity.

There’s an inherent ease of use built into the Ultra, and particularly with a hydrofoil it feels familiar and predictable, but at no point slow in its handling and power delivery characteristic. The juice is there instantly when you require it, to power out of a tack for instance, and disappears just as quickly. Particularly when depowered, it’s a kite with a passive nature, which allows you to concentrate on the foil and body position and doesn’t pull you out of that all-important alignment.

What’s not to be underestimated with the Ultra is the application it’s got outside the realms of hydrofoil use. It holds its own as a wave kite particularly in an underpowered situation where you can utilize that extra drift – there are some big advantages over a three-strut and, overall, it feels tighter and more responsive than its predecessor.