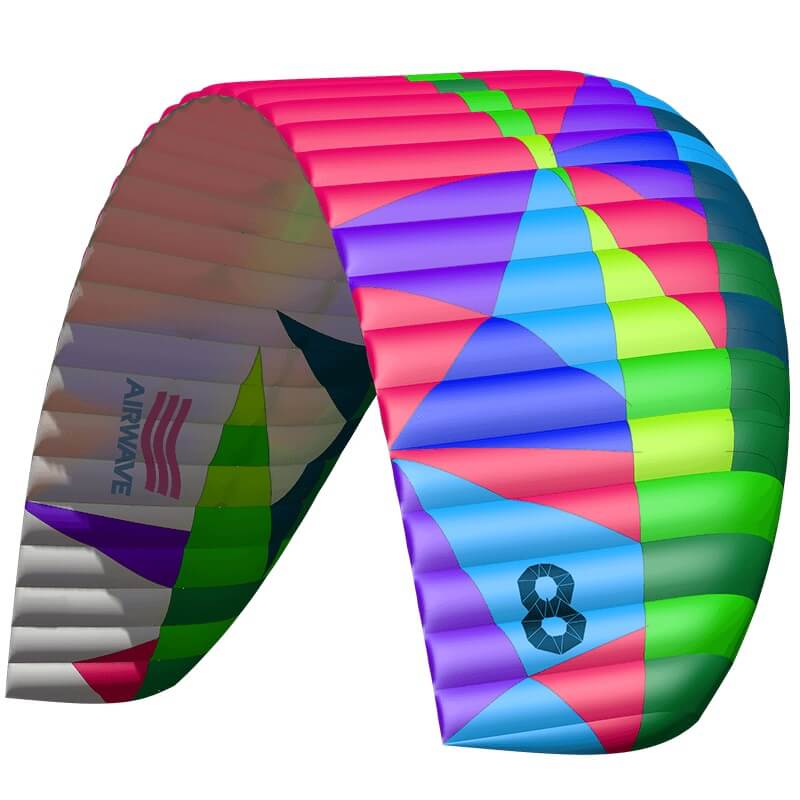 Airwave are a company with a strong heritage in the world of paragliding who have decided to now turn their hand (and their technology) to the world of kite design. This is not an ‘off the peg with a new logo’ entry into the market though – the guys at Airwave have gone completely down the ‘blank sheet of paper’ route and have tried to create a kite that steps into a different sector of the market – in fact a kite that creates a new sector in the market. The aim with the Koala design was to emulate the flying characteristics of an LEI kite, but to bring the benefits of a foil kite. This is not a kite that is designed to spend its time on the racecourse nor is it a kite that is designed to be the only kite left on the water when the wind drops (although they are working on a 15m…). The Koala is a kite that is designed to be used as your everyday kite. It’s a kite to replace your inflatable quiver.

A bold mission statement for sure, and we were excited to see what they had been up to. In terms of the tech in evidence, the primary objective of the team has been to create maximum stability – the kind of stability that you get with an inflatable kite. With this in mind they have used technology such as Cord Cut Billow with two seams of stiffer cloth running front-to-back to absorb the ‘panel ballooning’, stiffen the kite and result in a more responsive flying experience and a stabler kite. Also worth noting (and not something we usually cover) but the Koala really does look pretty insane in the sky – there are a lot of colors there but the colorway really does work and certainly turned a few heads on the beach.

Getting going and we are more used to flying foil kites than a few years back, so the number of lines and the launch technique feels less alien than it did, but even with this in mind, the Koala is by far the easiest foil kite we have launched. With the reduced number of bridles and the five openings to inflate the kite, as soon as it left the sand it began to take shape and by the time it had reached the zenith it was good to go – no ‘bar pumping’ or flying across the window waiting for it to take shape. Once up there it quickly gains internal pressure, and the overall stability once flying is impressive. Of course you expect foil kites to be less likely to fall out of the sky in sketchy beach conditions, but we noted that the Koala did not shift around as much in the air and the high internal pressure kept it very stable. The most trouble normally encountered with foil kites is when the tips are collapsing and get tangled in the bridles. We tried to stall the Koala in a whole range of maneuvers in light and moderate wind, and it just stays open and rigid in the air. Its ultra-light structure makes it float impressively which is really a benefit when foiling downwind.

For foiling the Koala will generate speed and immediate thrust and accelerates to cruising speed quickly.  The Koala is then easily placed wherever you need it in the wind window and can be slowed down or accelerated on demand. It is intuitive to control and will let you focus on your tacks and gybes, giving you a solid amount of lift to ease your maneuvers on the foil. Moving on to twintip riding and the low end is impressive and gets you up and going comfortably – we had the 10m on test which would equate to a 12m LEI kite and the turning was not super quick, but you would not expect a 12m LEI kite to be super quick (Note: We do have the 5m on test for next issue and are excited to see how this compares to a standard 7m). Then, once you are riding, the sensation is genuinely very similar to your regular kite – power delivery is smooth and immediate without any lag – and you get a nice injection of power when you sheet in. For boosting on the 10m we had a couple of sessions in 20+ knots and you get a serious amount of hangtime and some nice lofty cruising…

Overall we agreed that this feels like a very different kind of foil kite, and the stability and the confidence this gave you are a major plus. The design and build quality is also very impressive and the small pack size is also a big plus. An intriguing project and – on this basis – we look forward to seeing what they have got for us next.