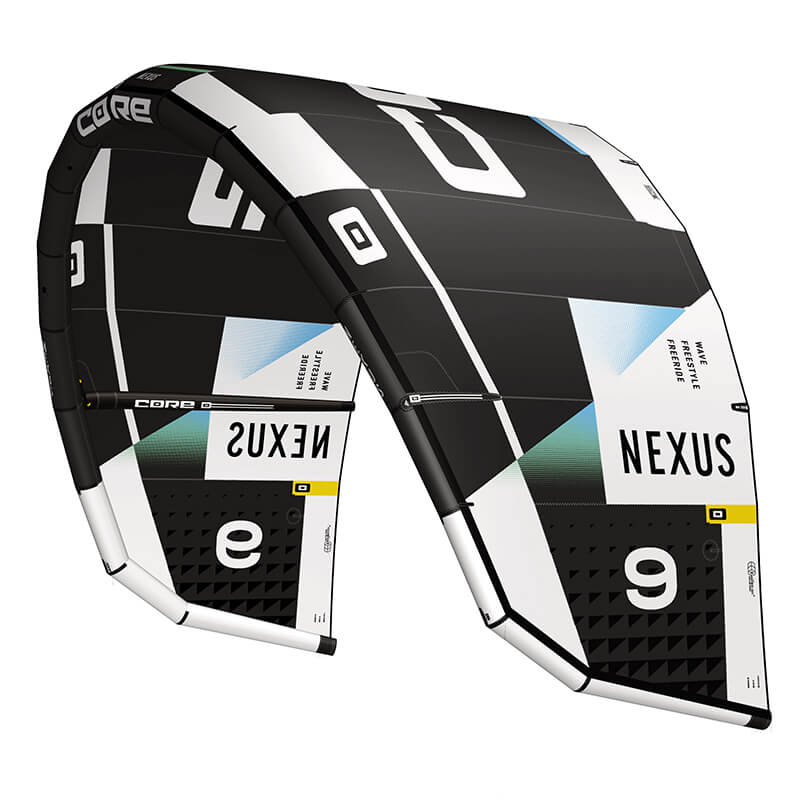 The CORE Nexus has been the German brand’s discipline-spanning do-it-all kite for around half a decade now and has been exceptionally well received by budding freeriders. From the get-go, we’ve always enjoyed its playful and smooth flying characteristics, so were intrigued to see how it’s been updated for the third version.

With many brands now switching to new materials, it’s no surprise to see CORE implement this in the latest Nexus. This comes in the form of Exotech 2, their new Dacron equivalent, which makes up the airframe, and Coretex 2 for the canopy. Both new materials present weight saving and increased stiffness. The Nexus is also lovingly garnished with some Grintex patches similar to Kevlar, which cover key wear areas between the leading edge segments and do a stirling job of avoiding your front tube getting scuffed up on the beach. The inflation system is the now long-proven proprietary design from CORE with the stainless crossbar to lock in the bayonet fitting on the hose, and what can only be described as a plastic Pringle for deflation, which tucks away into a little sleeve for safekeeping when flying.

The twin pulley plus a slider (per side) bridle remains from the previous model and continues to provide some good gust suspension coupled with quick pivotal turning on tap. The CIT modes are a simple change of leading edge hang point to alter the kite flying characteristics to bias it towards wave, allround and freestyle. In our testing, what appears to be a small physical change to the bridle actually makes quite a marked difference to how the kite handles, and anyone wanting to use the Nexus for waves in particular should definitely take the time to play with this.

In the air, the Nexus retains the nippy and smooth character that it’s famous for, and long-term users aren’t going to be facing a full sea change to dial it in. The new materials have markedly improved wave performance, where a lighter and faster handling kite that pushes forward well when required is a massive asset. The increase in response and drift is quite noticeable, and probably down to the weight saving and increased stiffness through the airframe.

For general freeriding, the Nexus turns and climbs eagerly, providing decent lift on sheet. It whips a comfortable kiteloop with zero fuss, and has the forward speed and handling dexterity that will catch you every time without fail. On a twintip, you can chuck the kite around quite liberally without any dangerous effects. Power delivery is smooth, progressive and easy going; unhooked performance is well behaved and stable and produces a generous amount of pop and downwind travel.

It turns out third time is an absolute charm for the Nexus platform. CORE have taken one of their most popular models and intelligently applied some new materials, which makes a significant improvement to every aspect of the Nexus. Now a lighter handling, and easy-to-tune kite which heralds a massive degree of versatility in smooth freeriding, and more than packs a punch as a legit wave kite. For the rider that likes to do a bit of everything, the tuning setting and amiable nature are going to maximize your progression in any discipline and be a huge asset as a travel companion. For a large segment of the kite populous, it could be the do-it-all solution, particularly for those that like an easy life.