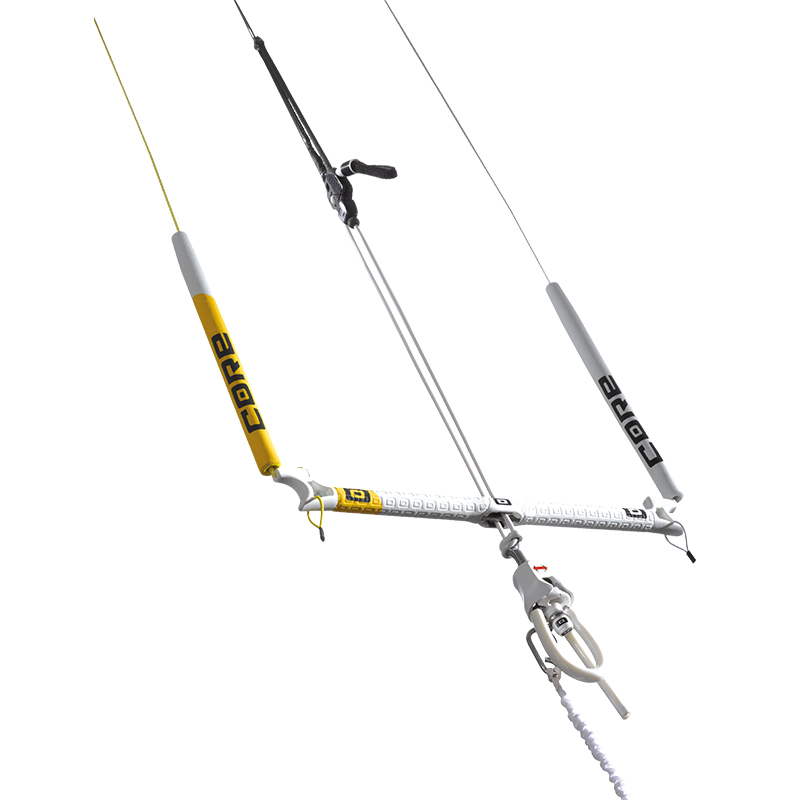 Complementing the recent release of their iconic GTS kite – the GTS4 – CORE have also released an upgrade to their bar system to the Sensor 2S. The additional ‘S’ in the name refers to some new goings on at the chicken loop end. First up is the S-Neck which employs an angled stainless steel connection coupled with some clever attaching of the depower lines. The attachment looks a little bit crazy but the outcome is that there is completely even distribution of load between the two lines, and they are perfectly aligned with the QR. The second element is the new front line untwisting system. This uses new ceramic bearings for pretty much automatic line untwisting without having to sheet the bar all the way in to activate it. In addition to this, the lines from the depower to the QR are now Tectanium (as you get on the Pro bar), coated in plastic.

The safety is then the SSF system, which stands for Supported Single Frontline. We discussed it with Eric Rienstra at the Surf Expo and it was one of the things he mentioned as having made a big difference to his riding, as the kite is ready to go again after you have put it down every time. Sometimes it’s the simple but well thought out ideas that make the biggest difference to your everyday riding experience…

We rode the Sensor 2S with the new GTS4 and 24m lines and were impressed by the new features. The coated lines look and feel slicker than the old ‘exposed’ system and there was no ‘stickiness’ from the coating as you run it through the bar (although as with all coated systems we would always advise that, to avoid kinks, you pull these through and leave them loose rather than wrapping them round the bar). The new swivel was very effective – with the original Sensor bar we did find that you could end up with one or two twists right at the bottom that you would need to swivel to get out, but the new bearing and S-Neck do automatically force twists out pretty much every time.

In a sentence: When it comes to being into tech, nobody else does it quite like CORE – we are always astounded by their attention to detail and the amount of thought that goes into their products and the Sensor 2S is a case in point.