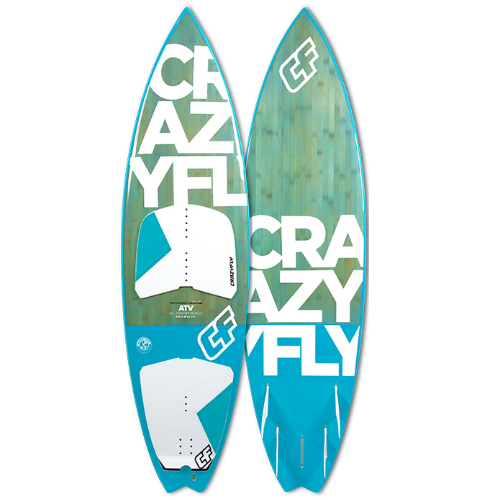 CrazyFly went back to the drawing board for 2015 and came out with some spanking new shapes to show to the world. The ATV is the most versatile of the range.

We had the 5’10 which comes in at a healthy 19” wide and at 22.5 liters. Weight wise and it has really trimmed down from CrazyFly’s previous surfboards… There’s a bamboo veneer and less glass, and construction feels tough without being overweight. We really like the shape – 19” is pretty wide for a 5’10 and there is some width held through to the nose making this a true ATV (All Terrain Vehicle).

Five fin boxes and the fins are Futures – we rode it with the quad set up. Getting off the beach and there is plenty of width in the nose and plenty of volume so you don’t have to work hard to get going or to power yourself around during your session.

On the wave and the quad set and swallow tail deliver a very impressive amount of drive. You can really load up the edge and drive the ATV onto the wave, then the quad set up has a nice skatey release if you want to really throw it through the lip and let the tail go. In more solid waves there is plenty of hold with the fin and tail set up, and you could take the ATV out in head-plus conditions with confidence.

Yes: we were impressed.