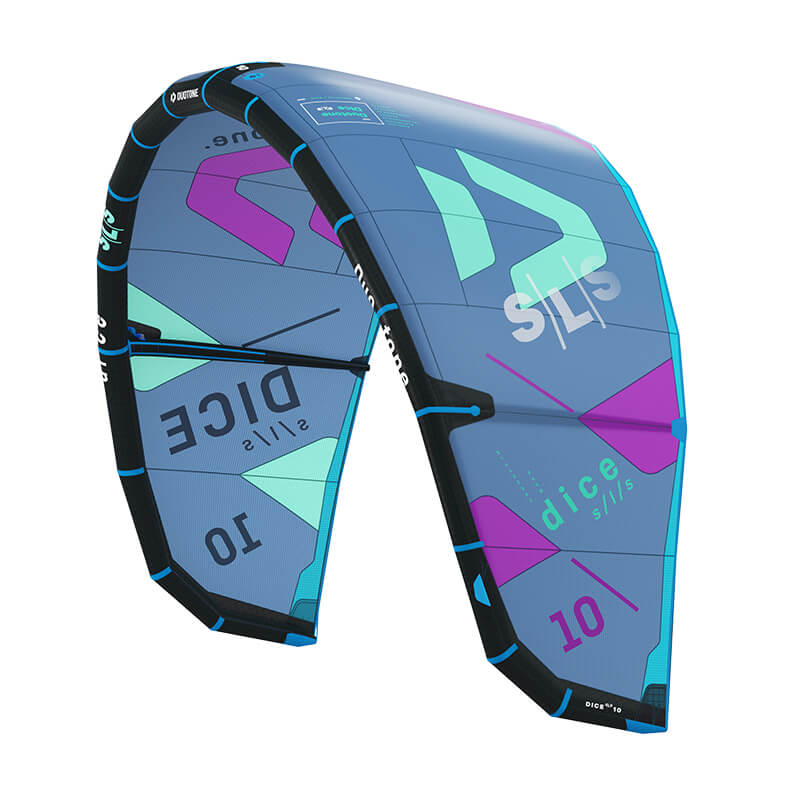 Duotone has a sizeable range of kites to fit everyone’s needs, but one particular model aims to do it with extra precision and explosiveness… The Dice is aimed at riders looking for a performance machine that will deliver in all conditions.

The Dice was already making a big statement in previous years as a kite used across many disciplines including Big Air performance at King of the Air. With its proven-to-perform three-strut, slightly C-shaped arc construction, the Dice was always a fast and stable kite. With the Stronger, Lighter, Superior update, we were excited to see what extra we could squeeze from one of the most versatile kites on the market.

The 2022 SLS model’s frame built from new Penta FX material is lighter and stiffer than the regular version. This major update made the kite lighter, making it even more stable and quicker through the wind window. It has an impressive low end and is effortlessly stable at the zenith, making it a decent choice for foiling in light winds. In the kite’s mid wind range, unhooking is a style of riding to go to. With lots of similarities to the Vegas, the Dice offers excellent unhooking performance with good pop and lots of slack to perform handlepasses. While testing the SLS model with the Click bar, we felt a more precise and direct feeling on the kite compared to previous models. It’s worth mentioning that for unhooking, we recommend the hardest pigtail setting on the wingtip as the overall bar pressure of the kite is really light. It took some tuning in when sending the kite to 12 when it wasn’t fully powered as we didn’t feel much response from the kite, sometimes letting it travel too far. So the Dice is not a kite that everyone can take into their hands and boost like crazy – getting used to the bar pressure and finding the optimal setting takes a little time. But once it’s done, the kite delivers.

The Dice SLS really excels when the kite is loaded with wind. The light and direct feeling make it move extremely fast in the wind window and, with a well-timed takeoff, it boosts with insane explosiveness. The height and feel of the jumps was comparable to five-strut kites. Jumps are explosive and fast with more hangtime than a C-kite, but don’t expect a lofty and floaty jump. When testing this kite, there was one main thing on our minds: loops. The Dice SLS is a kite made for looping. With its lighter and stiffer frame, it flicks through loops in no time, leaving plenty of time to be caught up before landing, and the tight loop radius and direct feeling on the bar kite make it comfortable to commit to a kiteloop without fear. But be prepared for some serious pull if you commit to sending it.

We tested the 9m in various conditions and were impressed with its overall performance. It has an interesting character with explosive power and fast steering, made for riders who want to push one kite to the limits of every discipline.