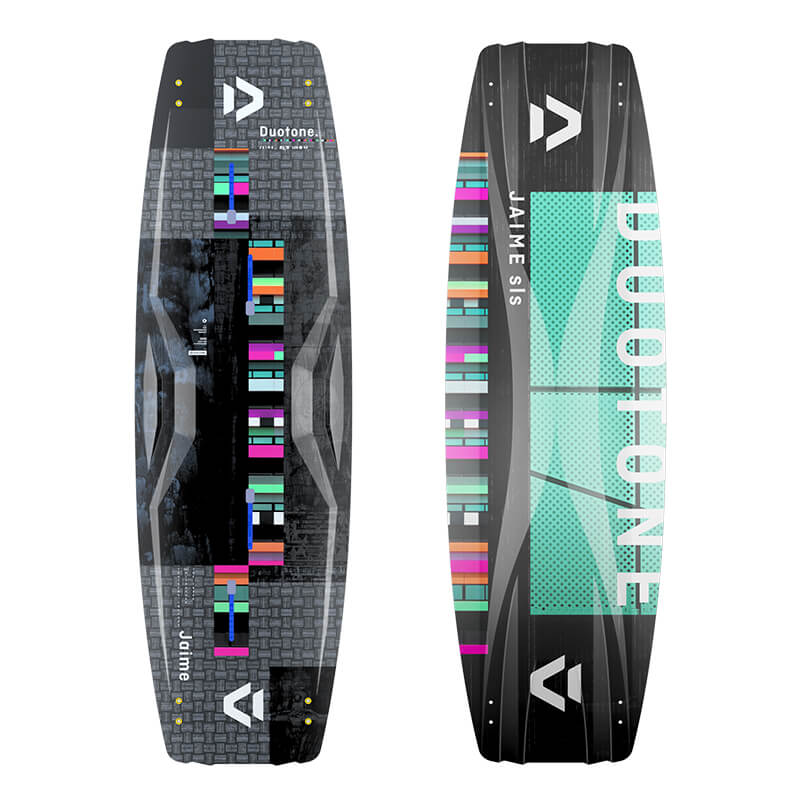 The Jaime SLS was introduced in 2021 with an Innegra coating, and has quickly become one of the most popular carbon boards on the market. The long-running Jaime has been in Duotone’s lineup for more than 20 years, while its stronger and lighter version is an option for riders wanting an extreme performance board for every condition. 2022’s model solidifies that the Jaime SLS is made to excel in performance freeride, as it has been the choice of almost all Duotone team riders competing in Big Air events.

The new Jaime SLS feels light and packed with performance features. It is considerably stiffer and noticeably lighter than Jaime’s classic model. The Innegra construction with Absorption Flex Tips and Double Diffusor bottom made landings feel very smooth and the board easy to handle in various conditions. While testing we noticed the grip that the board offers, not only on flat water, but also when cutting through chop. It was easy to load an aggressive pop both on the flat and in choppy water. The quad channel tips also remove any chance of a slippery landing as the board grips the water and gives total control to the rider.

When riding the Jaime SLS in strong conditions the stiffer profile of the board made it easier to hold your edge at higher speeds and it felt more locked in. On lighter days the multi-channeled bottom didn’t give any feeling of shaving off the speed, and it efficiently got planing and took us upwind with no struggle. The pop is worth pointing out as it’s a trademark of the Jaime SLS, and the board excels in it, whether doing a little ollie, a loaded jump to the moon, or an aggressive pop for an unhooked trick. Particularly during load-and-pop jumps, we could feel that the board found a sweet spot in weight balance and stiffness, which in our opinion is a significant upgrade in the SLS version.

For kiters who want to ride full power in all kinds of conditions, don’t want to be limited to their trick repertoire, and want to be able to mix an unhooked style of riding with massive Big Air jumps, the Jaime SLS is a no-brainer.