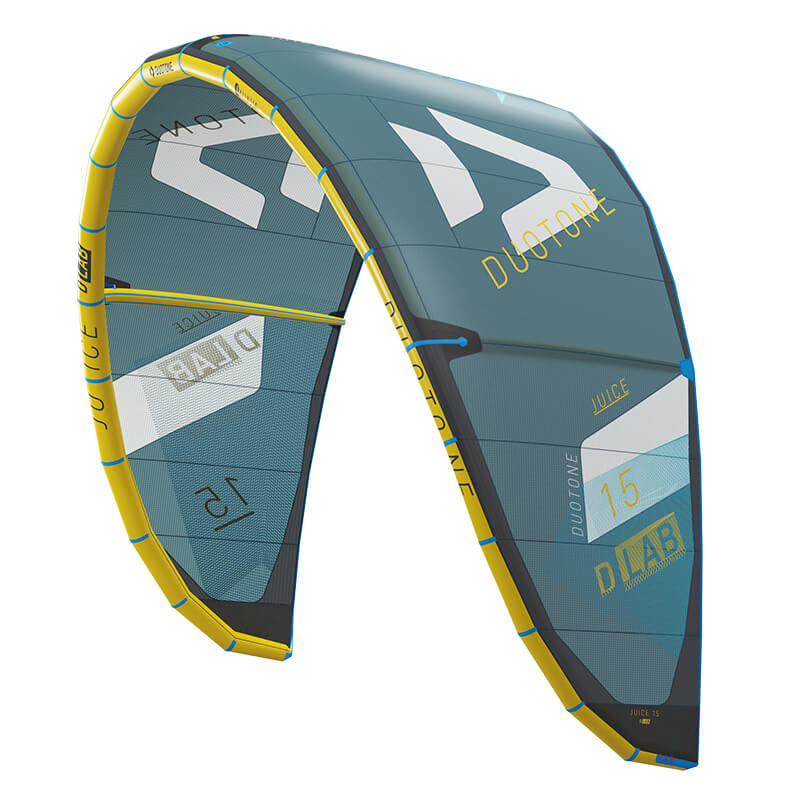 It’s no secret that the futuristic, laminated Dacron equivalent, Aluula, has been licensed to various kite brands internationally, and this is the first kite outside the Ocean Rodeo stable we’ve had into test. Duotone haven’t stood idle through the pandemic, and designer Ralf Grösel has been diligently prototyping and testing with this new cloth, and adapting the manufacturing techniques to suit.

The Juice is Duotone’s lightwind all-rounder, and has always been a benchmark industry-wide as a multipurpose, early-flying, lightwind-specific three-strut kite, and in a way the Juice concept provides the perfect test bed for Aluula as it’s at the fringes of the wind range where its implementation will perhaps show the most benefits.

From a build perspective, there are many factors pointing towards efficiency and weight saving, aside from the obvious application of the new golden cloth on the inflatable sections. The leading edge is low-diameter for a kite with this much canopy and is beautifully sculpted with almost no harsh joins between each section. There’s also the usual scuff protection present between each segment and over the important parts of the wingtip. The bridle is similarly low-diameter, drag-free and does not utilize pulleys. There’s minimal but well-placed intermediate cloth reinforcement around the strut junction with the canopy and trailing edge. On paper, the weight saving comes in at around 30% below a standard model in equivalent size, which on a kite this size has a dramatic effect on performance. It’s a kilo less than its Dacron framed counterparts.

In the air, it’s a clean and open canopy, and what you immediately notice is a massive extension in usable wind range at both ends of the spectrum. Early flying is equivalent to, if not extended beyond a mono-strut of equivalent size, and when a kite would normally start to contort under heavy load at the top of its wind range, it simply holds firm and flies forward. What’s most striking is how agile the D/Lab is for a kite with so much canopy – the stiffness in the airframe results in genuinely perky turning for a 13m, and the weight loss combined with the well-balanced steering makes for an inherently stable kite, even in the lower echelons of its wind range. The steering characteristics enable a large kite to feel active and useful, and the kite develops power smoothly on the upstroke; where equivalent LEIs will have to drag themselves back up the wind window, the Juice behaves like a far smaller kite and gives you that pulse of power when you need it to drive upwind, which is super noticeable in its low end. This translates into a great performer for hydrofoil use, with that responsiveness sometimes lacking in a larger kite to whip you out of your transitions.

In the top end the Juice maintains its shape impressively and turns into a very lofty hooked-in performer with a twintip, holding you in the air for an amusing amount of time and not initiating much downwind travel. Duotone set the recommended threshold between choosing the 13m and 15m sizes at 85kg for mixed discipline use. It would definitely work well as a luxury quiver topper and extend your lightwind riding further than you’d anticipate with standard materials, being a session saver of the highest order.

The Juice D/Lab is a far cry from the old kite built with new material; it’s a completely different and highly efficient beast and is a formidable and entertaining lightwind LEI. Duotone have pulled off a pioneering lightwind masterpiece and display a commanding use of the Aluula material.