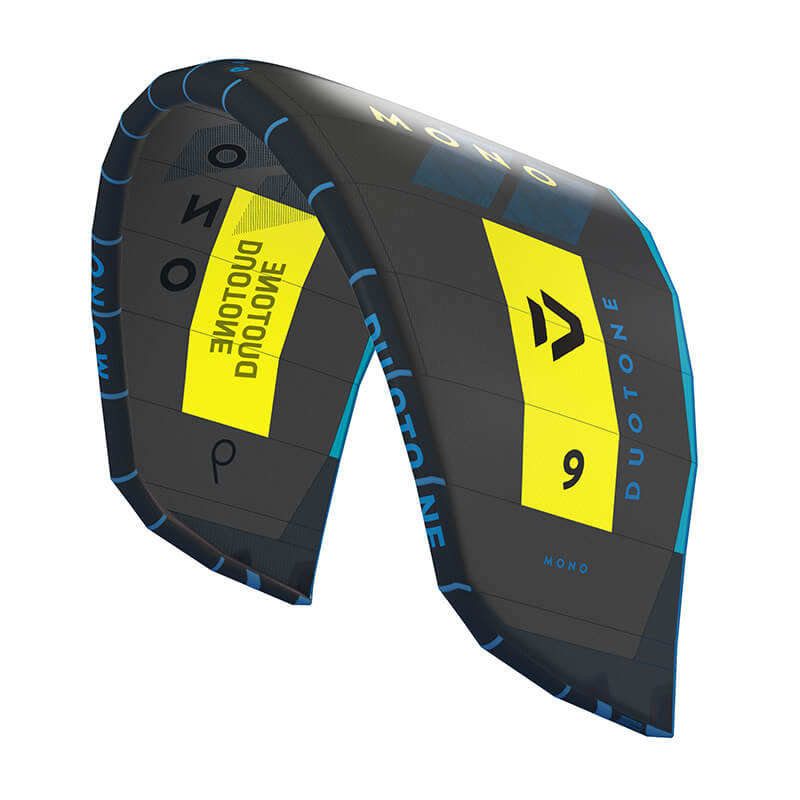 Along with the Duotone brand shift, the Mono is treated to a full ground up redesign this season led by long term designer Ken Winner. Visually it’s apparent the Mono has gained a little more of a pronounced arc and more wingtip area. The leading edge has a heavily swept design and the kite is noticeably lower aspect which results in immediate ground pull once it’s in the air. Overall the build is minimal but not scrimping on quality materials, with Teijin Trinity cloth making up the vast majority of the canopy, and the usual scalloped trailing edge firming things up at the back of the kite. Then, even when depowered, the Mono has a reassuring underlying pull and hangs in the air well when the wind is lacking, so you are aware of the kite’s position at all times which is a reassuring quality for a lightwind kite. The single strut build lends itself to foiling use, and it’s obvious this was in mind with the redesign. In the air and the Mono is immaculately behaved and very stable in its low end. Turning speed is relatively reactive to bar inputs with pleasant feedback, but not twitchy and definitely on the more ‘mellow’ side in comparison with other single strut kites. Duotone have implemented a large diameter leading edge instead which does a good job of maintaining the kite’s shape. The nemesis of the single strut concept has always been flapping in the trailing edge, which was apparent in previous Monos, but Duotone have weaved some magic in this redesign to really minimize this, and there’s only evidence of flutter in the very extreme of the top wind range.

For freeride foiling use we found the kite steering perked up considerably on the shorter 22m line option, so drop those extensions off. The faster steering settings are well implemented here also. The Click bar is a clean and functional affair to use, with zero clutter flapping. For more general use with a twintip the Mono is a steady and predictable power source which has a nice smooth lift above you when moving the kite over zenith, we found it particularly easy to tack and jibe your foil with. For an advanced wave rider, its light weight makes it perfect for travel if you were heading for a surf destination with a whiff of wind without filling your whole luggage allowance.

In a sentence: The Mono punches well above its weight power-wise, has plenty of trim options and will cross over well for everything from school use to advanced foiling.