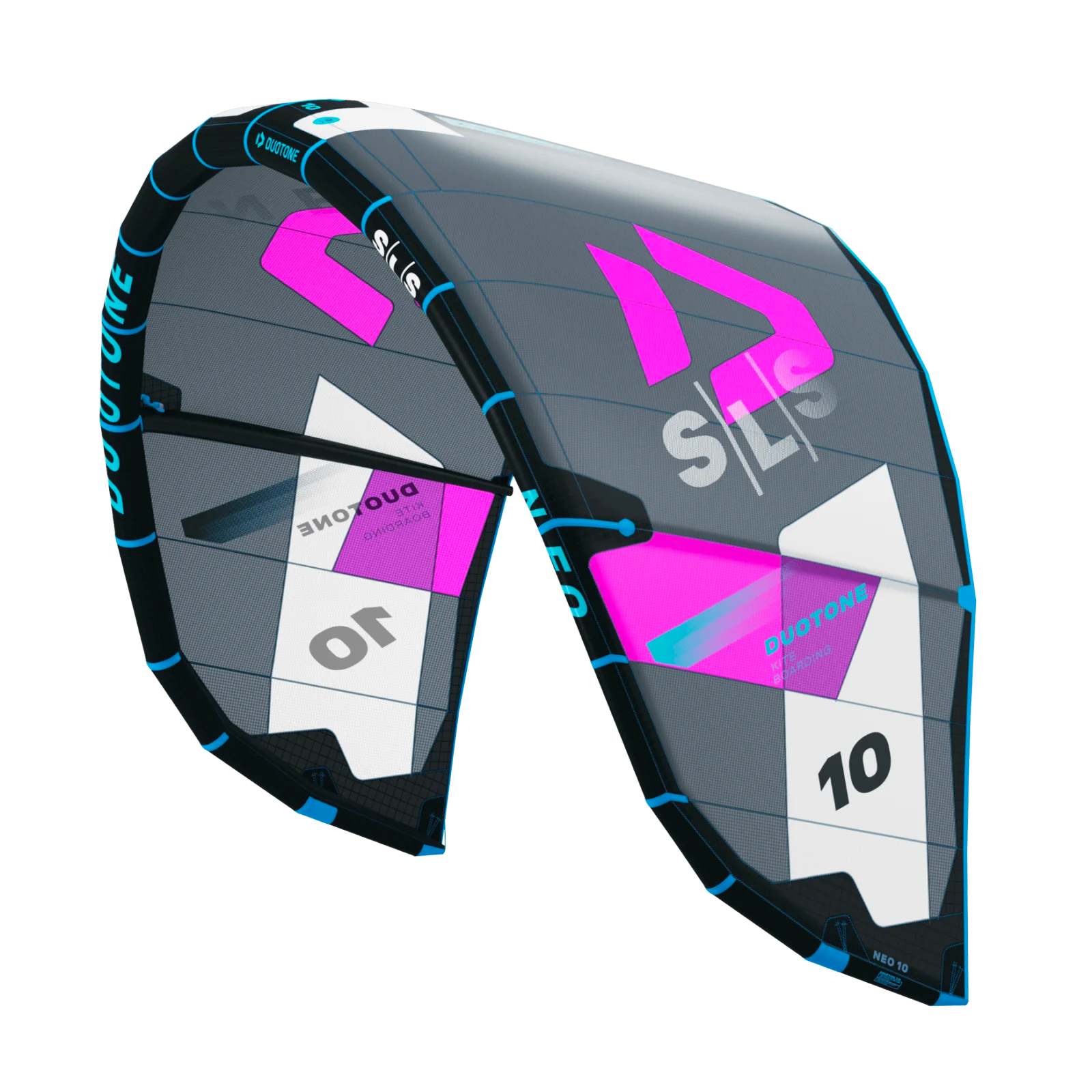 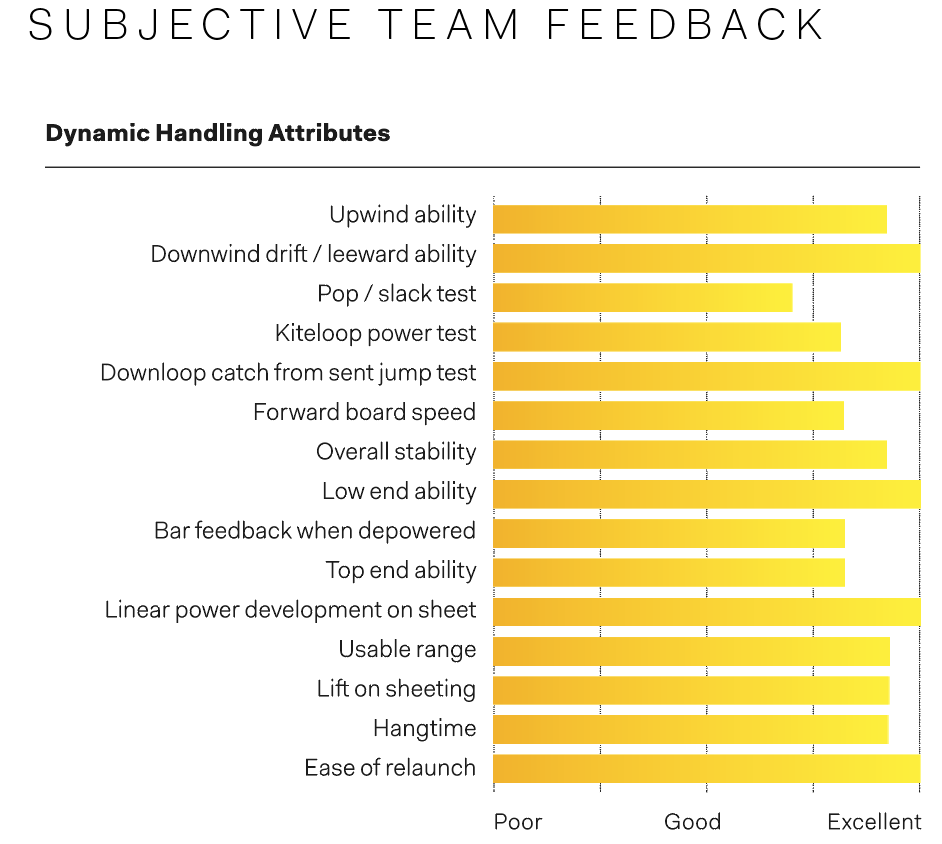 The Neo has been an industry benchmark wave kite with a solid competition history in both pure wave and strapless freestyle, as well as some big names free surfing on Maui. It is definitely a well-documented benchmark product, but with this year’s introduction of the SLS range from Duotone, we were eager to see how this already well-renowned kite could be improved with the all-new updated materials.

The Penta TX material replaces the standard Dacron used on most kites over all inflatable sections of the kites as well as all of the reinforcements into the canopy around the struts and into the wingtips. A thin high strength bridle made from premium Dyneema slices through the wind with a minimum of drag. To balance the ultra-rigid airframe that the Penta TX achieves, Duotone have implemented all new lower diameter Flex Struts, also found in the new Evo SLS. These free a little twist into the canopy and make for some very precise and intuitive steering. Small rigid wingtip battens help eliminate any vibration under aggressive turning.

The Neo has always been a kite that felt torquey for its size and this phenomenon remains true. It is a true ride-a-size-down affair and even heavy riders shouldn’t be afraid of the smaller sizes. What you immediately feel has changed most from the non SLS Neo is in the handling. Things are far more perky and crisp around the corners; the SLS material has made the Neo feel far more agile in the hands. The weight saving that comes with the SLS material definitely extends the low end of the Neo. In most situations, you always want to be on as small a wave kite as possible, and particularly if it’s gusty and offshore, the combination of a lighter kite and a more rigid airframe lets you punch through any lulls more effectively and there is less chance of the kite dropping out on you, which is always the wave scenario nightmare. The Neo has really simple and precise power delivery, and is smooth to fade the grunt on and off. On full depower the Neo retains the ability to lurk in the air with very little fuss. Your ability to control the Neo effectively one-handed has also increased, allowing you to open your body up to the wave more.

Out of a pure wave context and overpowered the Neo does a great job of loading up for strapless freestyle, with excellent predictable float and a fairly grunty kite loop. Sheet out and it climbs rapidly, helping you spot your landing which is more often than not wonderfully soft.

The weight saving in the Neo SLS ekes out even more low-end and early flying, and stability in lighter airs translates well for hydrofoil use. It packs a little smaller than the standard Neo, and also handles like a far smaller kite than previously. It is still an easy kite to position and ignore to ride the wave, but now in more technical onshore conditions the handling improvement really improves its agility and range of application. The pre SLS Neo perhaps used to rely on its excellent park and drift characteristics rather than super snappy handling. It now does both, which is a killer combination. 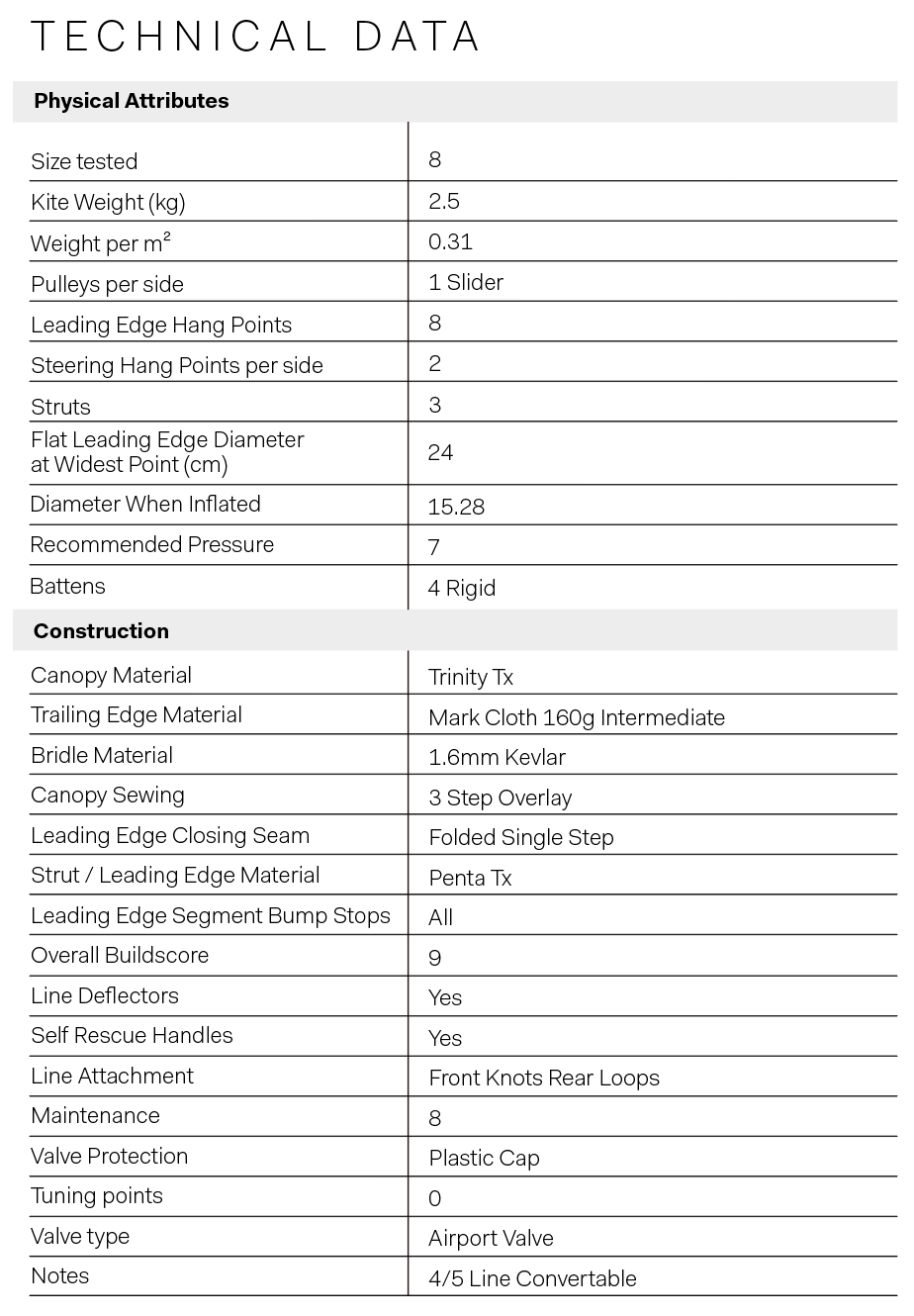 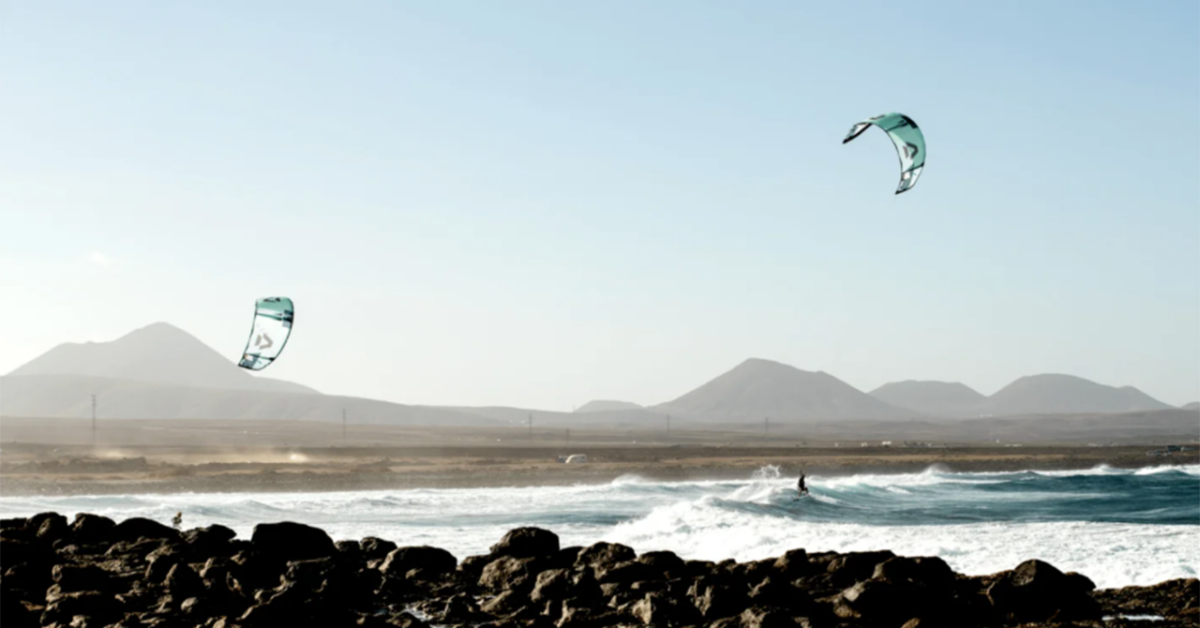 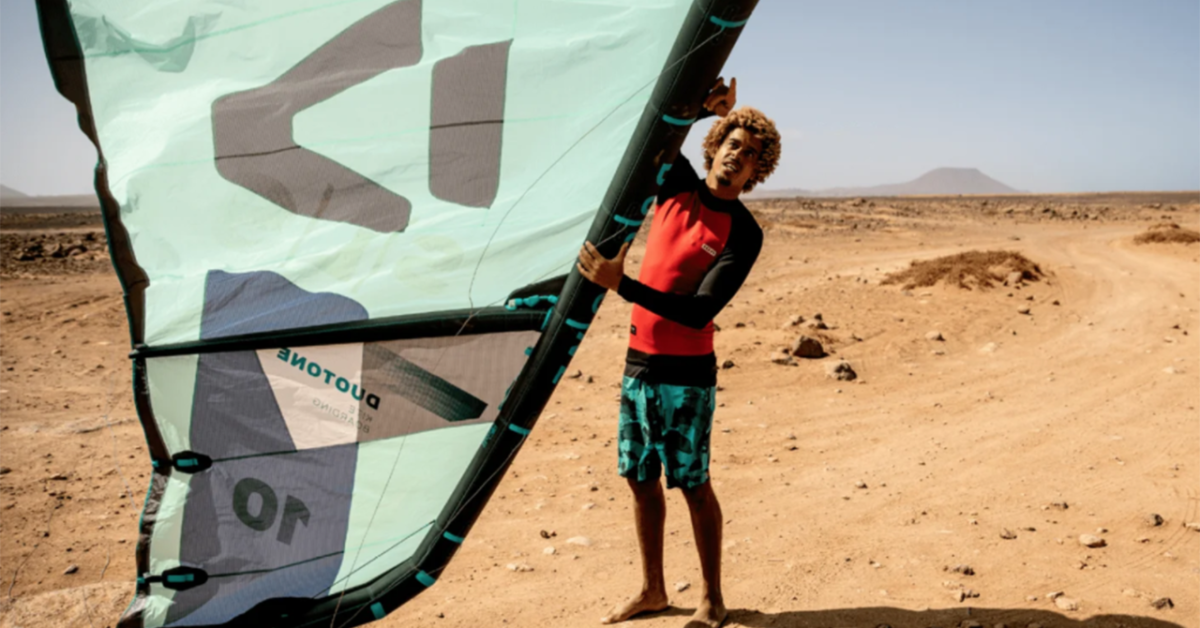 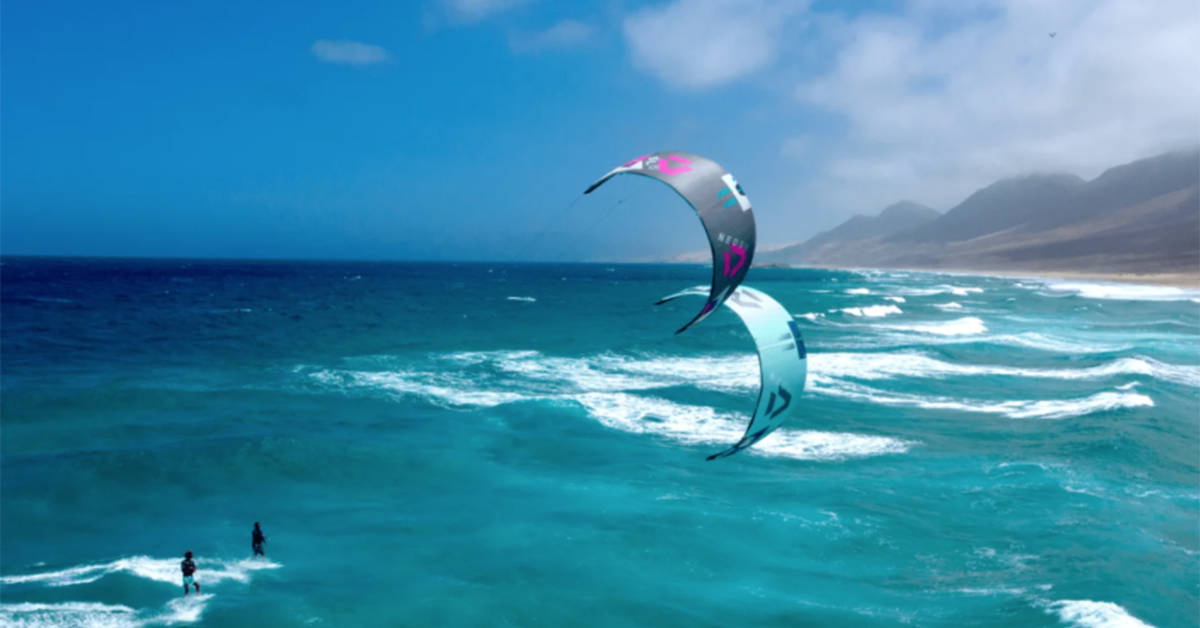 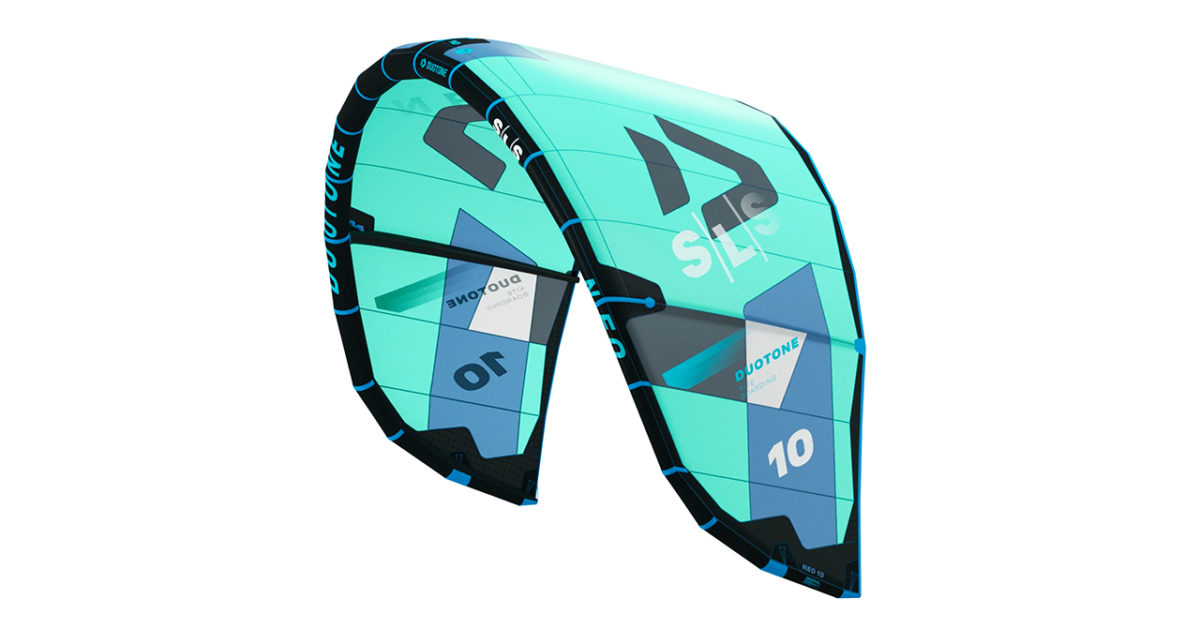 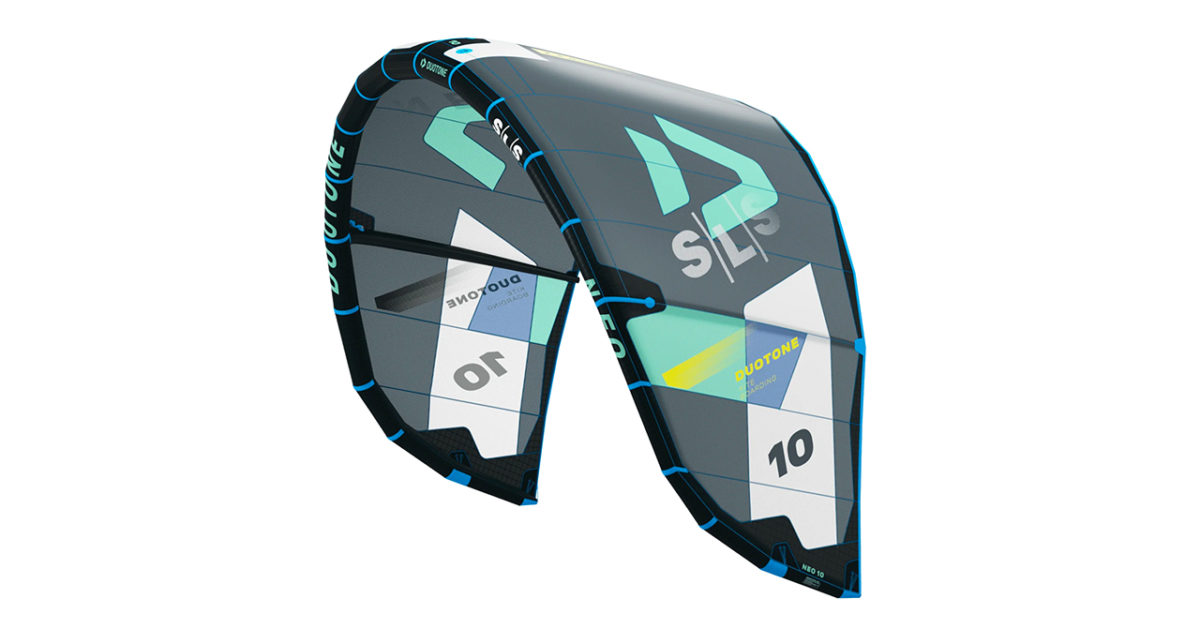 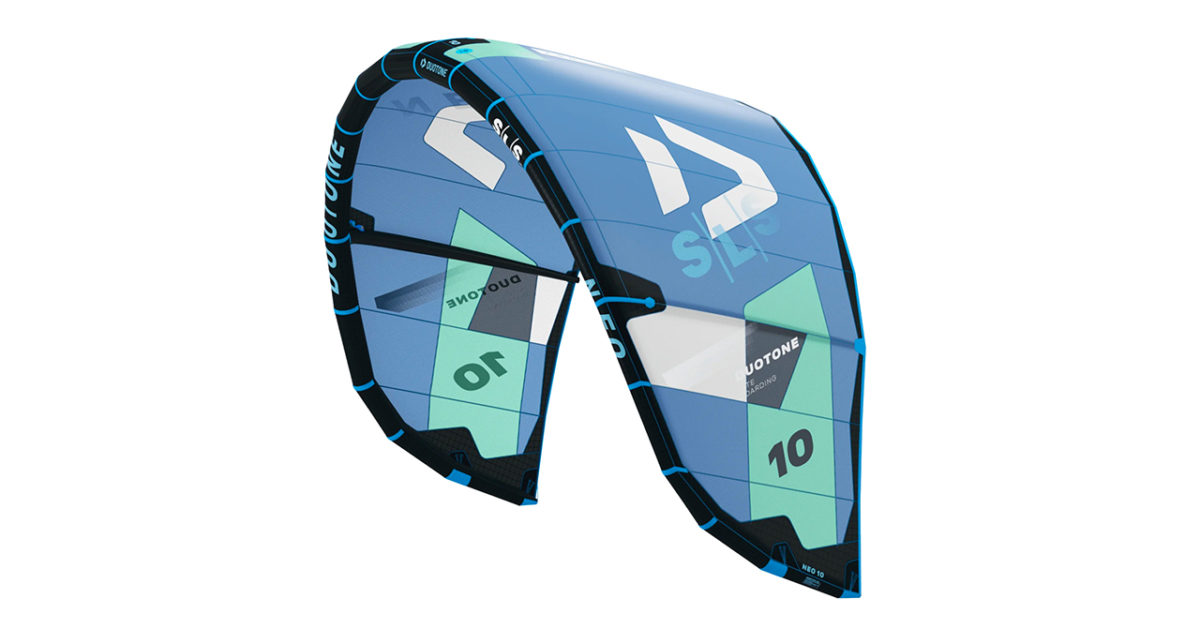 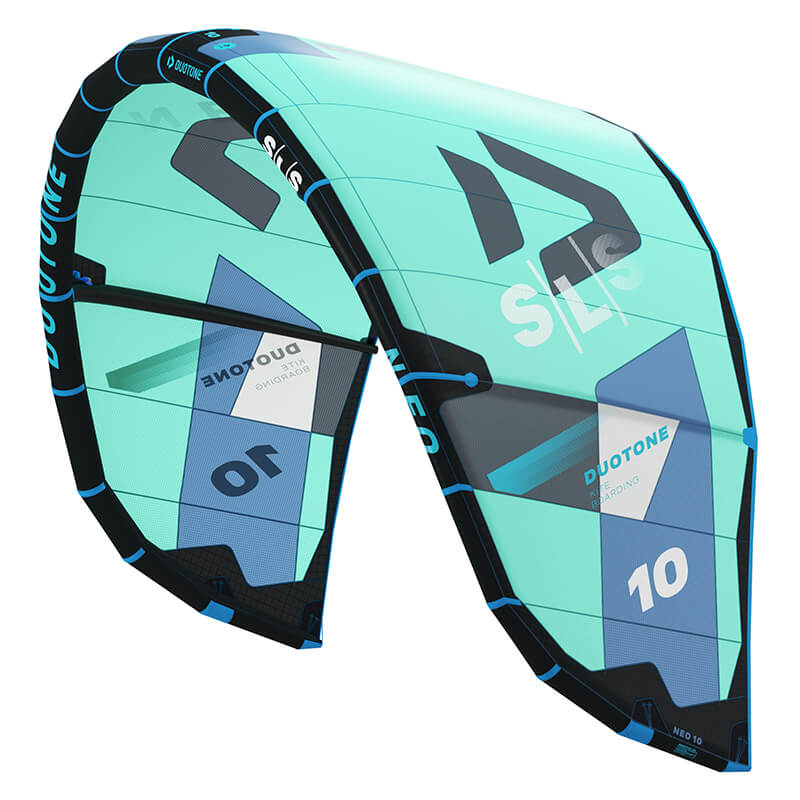 It is with much fanfare that the new SLS products have landed in Duotone’s range for 2021. With the new products all tested and signed off pre-Covid it has enabled Duotone to make a solid splash this autumn and has caused much chatter on the forums and beyond. So, SLS = Strong, Light, Superior. In the kite lineup the tech responsible for this (as we covered in issue 39 in our Tech and Materials slot) is the PentaTX material. As we are seeing across the kite market the ‘twenties’ seem to be all about one thing: weight savings. With kite designs having plateaued (i.e. they are pretty much all good, which is great for us) attention has turned to how we can apply materials to improve the performance of your gear.

PentaTX is lighter than Dacron, which has always been the weak link with a kite’s weight, but is also stiffer than standard Dacron. The weight saving is significant, bringing the weight down to that of a comparable single strut kite (it is now only around 250g heavier than a Mono), but the other perhaps more significant factor is how the PentaTX performs differently to Dacron. And the main difference is in its stiffness. It’s around 25% stiffer than Dacron and – in an industry which has spent 20 years melding ripstop and Dacron and building kites entirely around the relationship between the two materials, that is pretty significant!

So, this is a Neo, but a Neo built out of different material – in terms of performance characteristics it is kind of like the difference between riding a carbon and an aluminum foil… In terms of design, the Neo looks similar and in the air it has that distinctive, boxy, Neo shape that has defined a genre of kites and seen it on the top of plenty of podiums, but when you dig a little deeper you can see two significant changes that have been adopted to accommodate the PentaTX. The new Flex Struts which blend PentaTX and a heavier duty ripstop to provide struts with more flex which negate some of the ‘harshness’ of the stiffer material. The second step – to maximize the effectiveness of the stiffer frame – was to increase the size of the wing tips. So, it may look like a Neo, but Duotone haven’t just switched in the new material, they have rethought the design as well.

In the air and we tested our 10m Neo in a range of conditions, including a couple of foil sessions. The kite does fly earlier and sits more comfortably at 12 o’clock on the beach, in this respect it is like a Mono or other lighter kites – so you do do a bit of a double take when you look up and see a three strut Neo up there. That said, in most conditions when you’re planning to take a 10m kite out in the waves, you’re generally going to have enough wind to get off the beach and this is not a ‘lightwind’ focused kite. So where we are looking for the extra response (and to justify the extra $) is in performance. And the performance is definitely different – it can be summed up in one word: snappier. It’s a word we use a lot in kite tests, but the Neo SLS seems to epitomize it perfectly. It turns more quickly, it flies through the window with more speed, and the bar input is more immediate. It’s an altogether more direct experience. You can see why Duotone’s wave team have been frothing about it as that extra responsiveness can be the difference between a first and second place, but for mere mortals you can feel it too, and it does make a difference. If you are trying to get around a section, you can snap the kite through the window and it will give an immediate injection of speed and also generate power on the upstroke as well, but once you depower it sits and drifts like a ‘standard’ Neo. The low end is also excellent as you would expect from a Neo and – again as you would expect from a Neo – it is not a kite that enjoys being massively overpowered.

The Neo began life as a wave kite and that is still its DNA, but it also enjoys a big ‘freeride’ following and here you may appreciate the new tech, but most likely not as much as you will in the waves. It is still one of the least threatening and most enjoyable kites to fly available, but to get the most out of the tech you need to be pushing yourself and the Neo hard.

Overall, we felt that SLS has been a successful exercise from Duotone, it’s not just marketing blurb and you can see that Ken and the guys who have helped him test and develop the kite have had to rethink the received wisdom of Dacron-focused kite development and, on this evidence, have come up with an exciting new formula for kite design.