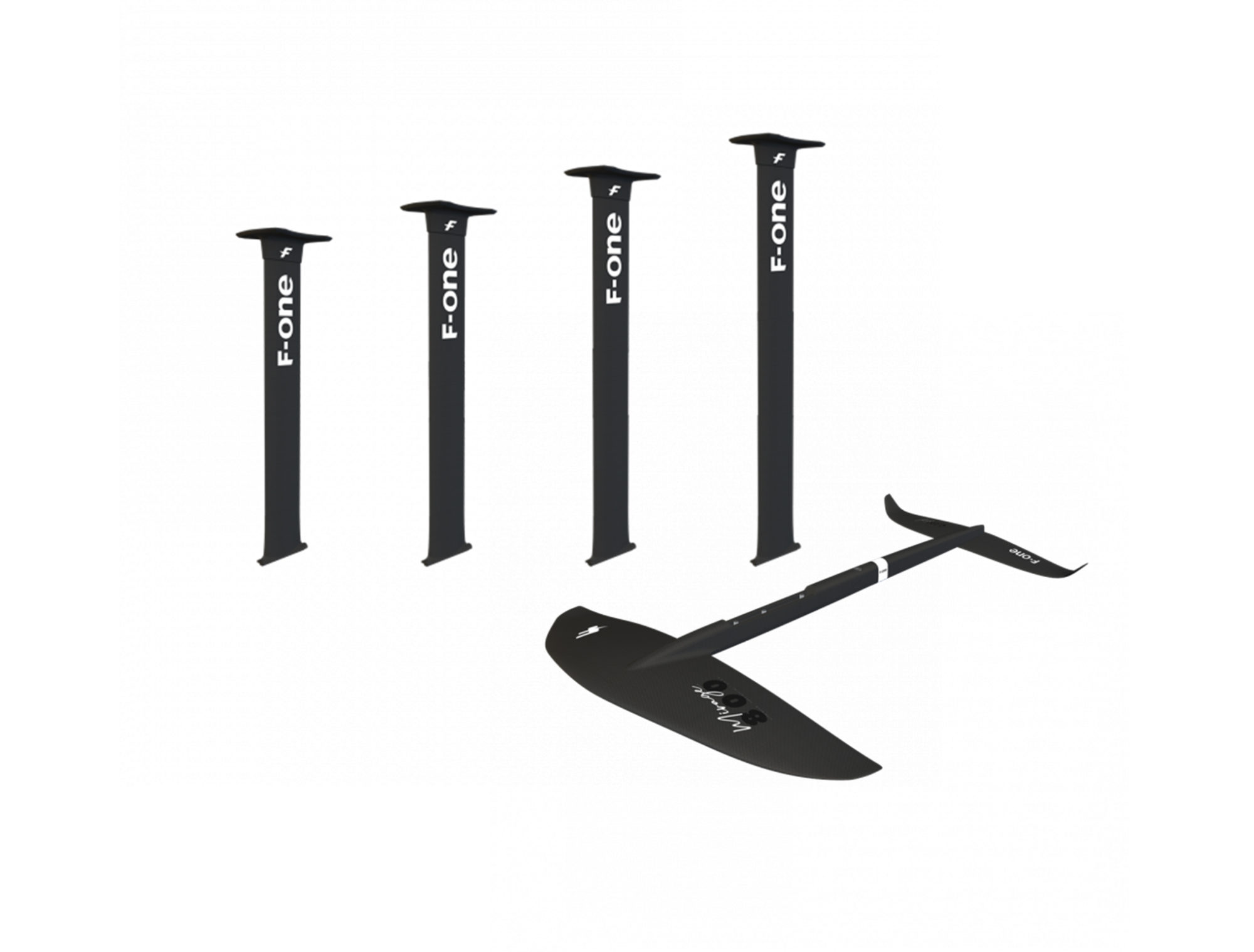 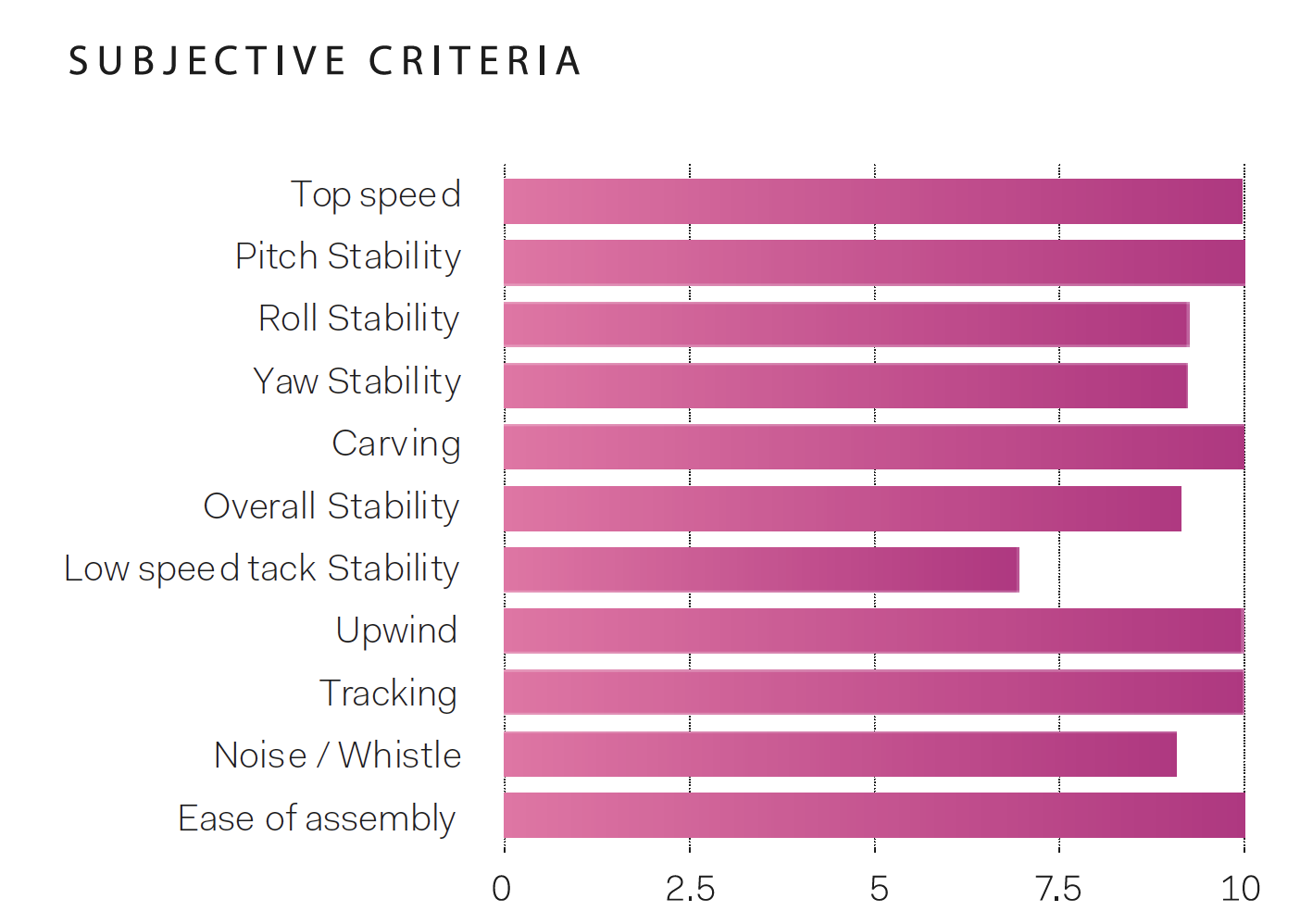 The Mirage 800 front wing has a gentle gul wing sweep and delta design, and rela-tively gentle aspect ratio of 4.8. The modular technology from the F-ONE surf foil range now transfers down to their kite foils, and the front wing is beautifully hewn into a single piece of pre-preg carbon, which includes the front half of the fuselage. Avoiding the normal front wing to fuselage joint makes things exceptionally stiff. The fuselage tail locks on with two M6 bolts and locks in at 45 degrees. The C220 surf stabilizer is thin and fast with gently upturned winglets, and bolts on to the bottom of the Mirage-specific fuselage tail piece, which is relatively long as standard. This is a great move from F-ONE as it balances out the relatively small front wing’s pitch stability characteristics. The tail allows for some free turning for a fast foil and allows for some fast banking turns.

We were lucky enough to test with the latest high modulus carbon mast from F-ONE which is a work of art. It is hollow in two chambers across its section and immedi-ately feels significantly lighter and stiffer than the standard mast. In practice, every small steering and weight input is translated immaculately down through to the foil, which is important. When cranking upwind, you can feel the extra loading you can push through the deep chord and how stable it is even through choppier sea states. For a small wing the Mirage 800 creeps up onto the foil impressively fast and isn’t too choppy pre-foiling, even in lighter wind conditions. It accelerates up to cruising speed rapidly and heralds excellent pitch stability through a wide speed range. It is almost silent for the vast majority of its speed range, and in the top end the Mirage doesn’t build drag or front foot pressure; it feels more like the kite is slowing you down rather than the foil, which still seems to remain very composed. Round the cor-ners, you need to go in with some speed and commitment, and you can carve some very stable high speed turns.

The Mirage is a fantastic example of a free race foil, with blistering top speeds in a straight line and surprising accessibility; it took half an hour to dial into, and then we were making our usual repertoire of transitions easily. Towing into faster waves, there was no build of front foot pressure and you can instantly feel the foil’s massive glide potential maintaining that momentum effortlessly and still remaining maneu-verable even at warp speed. Particularly for the larger spans of mast, if you want the ultimate in stiffness and weight, high modulus (HM) should definitely be considered and builds the system into something quite special.

For those who have mastered freeride foiling on relatively large front wings and want to spice things up again, the Mirage 800 suits the bill perfectly. It’s a great step up to performing all your transitions with a healthy dose more speed, as its innate stability reinforces your confidence that you’ll make the tack or jibe without fuss. 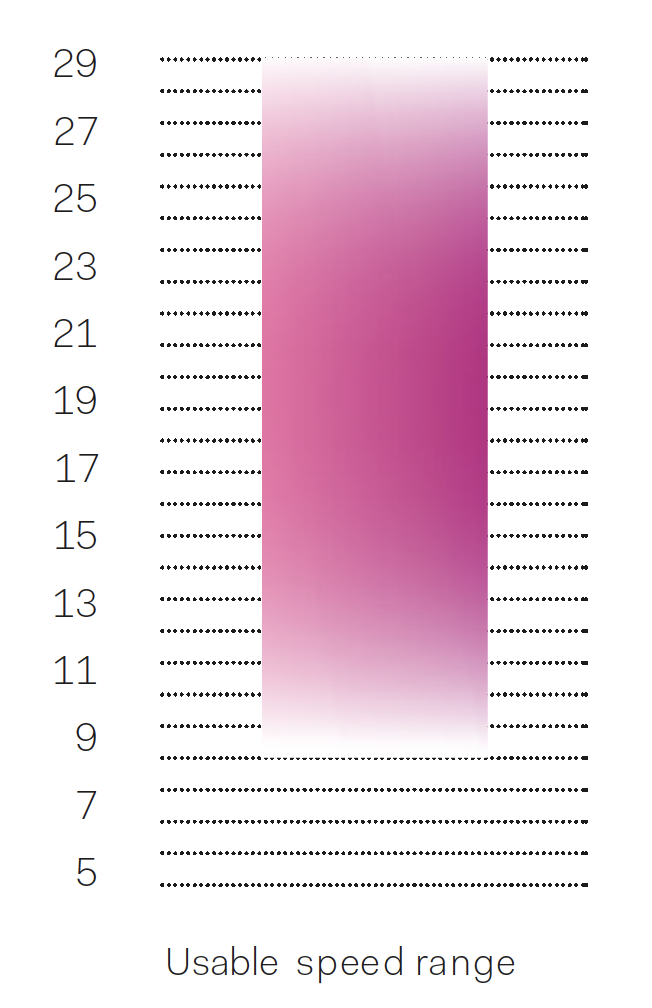