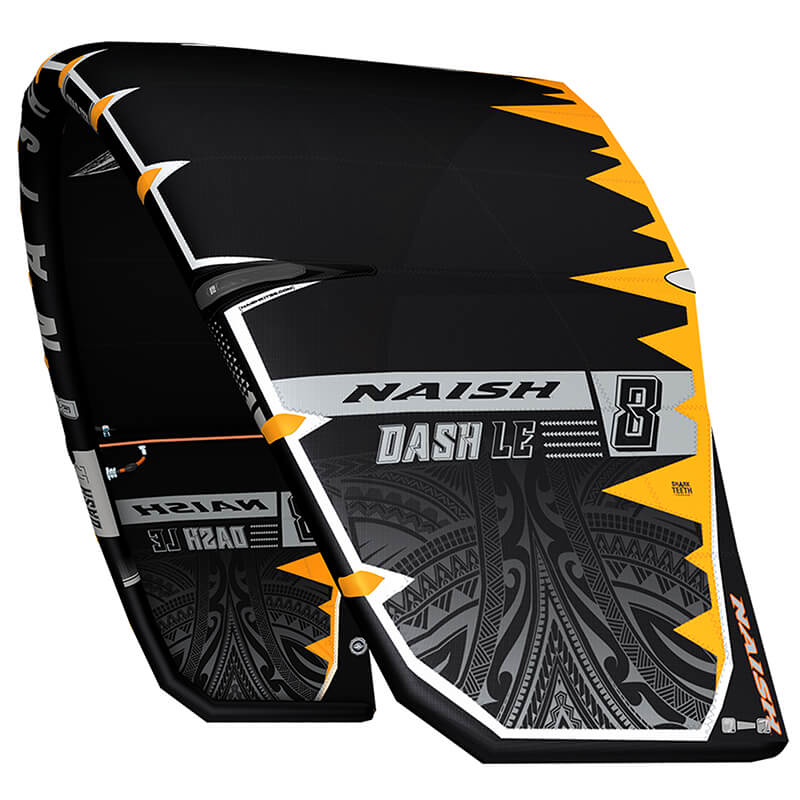 The Dash has been a mainstay in the Naish camp and sits alongside the Torch as a modernized freestyle-oriented performance kite for higher level or aspirational and unhooked riders. Season 25 from Naish has let them indulge in a little graphical nostalgia with the kite range, with the Limited Edition (LE) Dash sporting a massive skull and crossbones on a black canopy, harking back to the early Naish Series 25 years ago. If you don’t remember the original Sky Pirate directional, look it up – it’s a lesson in aquatic badass. People will automatically give you preferential right of way on this kite without a second thought. Construction-wise, it’s easy to get distracted by the striking limited edition graphics, but all the usual Naish bells and whistles continue to be there in force.

The trailing edge Shark Teeth run reinforcement up every canopy panel intersection and make for a super controlled and long-lasting leech. Naish dispensed with the long running (and opinion polarizing) Octopus system last year, and you now have a simple to service high diameter external system more in line with other brands, coupled with an iSUP valve for easy inflating. The Quadtex canopy material remains unchanged along with the hefty 11.5 PSI inflate pressure, making the airframe extremely rigid. Some new settings have been implemented on the leading edge hang points to span the arc out for more lift and hangtime or make it more C shape for unhooking. We had a good play around with this and it makes a tangible difference in the kite’s bar feeling and performance, so it’s definitely worth a few seconds changing the simple pigtail before you launch if you are looking at a perfect lagoon or some strong wind and kickers.

The Dash has superbly rapid steering and a powerful strike of power is produced across the window. This is no park-and-go family saloon; it’s a manual sports car and a little rider input is required to get it up to speed. The Dash thrives on board speed and once you have some, it really lights up. Bar feedback has been dialed in perfectly, and particularly when you are in unhooked mode on the bridle, it gives you no surprises and has all the intuitive benefits of a ‘real’ C shape kite without giving you instant tennis elbow. The purist can slow the kite right down with the rear steering hang points. Bridle set to boost mode, and the top end of the Dash in the Big Air and loop department is truly impressive. You need a little more technique and timing than with the Pivot to go massive, and can’t just rely on pure sheeting, but when it all aligns the upward lift is quite intense, and the loop has some serious whip with the Dash turning more on its wingtip. With a skilled rider on the controls it’s a mean and controllable kiteloop and the climb is rapid and predictable; it’s not for the faint-hearted.

What’s also noticeable, particularly with a kite that likes to be thrown around, is how tight the canopy remains. There’s a zero flap policy being adhered to in all positions in the wind window and smooth feedback through the bar. If you used to use C shapes and then steered away, this could be a great renaissance kite for freestyle as it’s forgiving and has the benefits of extra wind range and depower, and it’s really easy to chuck around, plus the very reassuring bar feedback isn’t going to cause you problems. There are obvious choices and comparisons to be made against the Pivot and we would summarize that the Dash has more punch in the turns, more unhooked application and an almost equal top end.

In a sentence: The Dash is far more versatile than you would expect and a very satisfying ride, and with the limited edition, psychologically the Pirate livery boosts the kite 35% in all performance criteria…