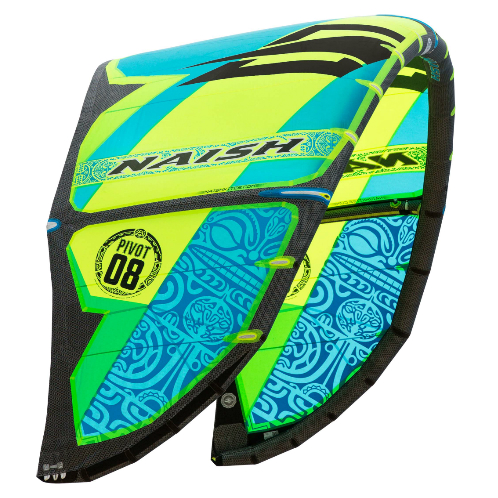 The Pivot was a real hit when it burst into the Naish range last year. A great kite in the surf but also a whole lot of freeride fun and with solid boosting credentials. With a different profile and feel to other ‘surfier’ kites, it offered more versatility than its boxier three strut cousins, while still delivering in the surf.

2016 sees an evolution of the successes of 2015. Materials and build wise all those great Naish features are there: Octopus Inflation, Radial Load Distribution, ABS bridle, solid scuff guards and Armaid patches to cover the main seams.

On the water, and the beauty of the Pivot is again its awesome turning capabilities. During the turn it really drops the power and once you have finished the turn you don’t get that sudden surge in the kite which you can find on other wave kites: the control remains but you can choose when to turn the power back on. This is a real asset in the more fickle conditions in the UK where we had this on test: it’s great in gustier winds, and in blown out conditions you can make super-quick adjustments if a slappable section pops up unexpectedly.

Away from the surf and the Pivot offers some great boosting. It does require a little more technique rather than just ‘send and pull the bar down’, but once you have dialed into the sweet spot the Pivot will give you some great jumps, and actually some pretty good hangtime, and – if your timing is right – you can boost huge (just take a look at Robby Naish hucking massive airs on his custom red and white Pivots…).

Looping, and the Pivot is pretty forgiving. As the name suggest it turns on its own wingtips, and during that it has very little power, so you could throw some loops, but only really to correct some big boosted airs. If you want to be megalooping you probably want the Torch…

Graphics wise and a fresh canvas has been handed to the Naish design team which they have decorated with typical panache: it looks great.

So, again, this is a very worthy addition to the Naish range. For a kite that only emerged last season, it’s hard to imagine a time before the Pivot…