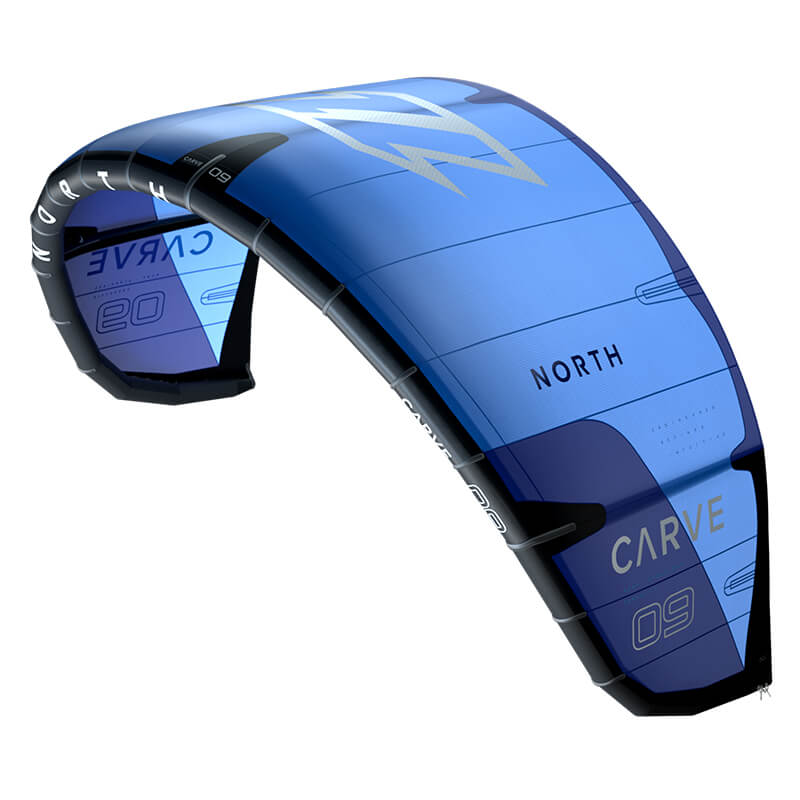 The Carve is North’s wave-specific kite and is undeniably a versatile beast in varying surf. We’re presented with images of Jesse Richman tearing Jaws to bits with it, then we see Camille Delannoy making ridiculous aerials and his sister Capucine taking various podiums. We were intrigued to see and feel the improvements for 2023 on a kite that in a few short years has quickly become an industry benchmark, and this year it’s received a major overhaul.

Technical changes include some light tweaking to the leading-edge diameter, and the bridling has been reworked to give a wider band of usability on the bar stroke and a more uniform handling feeling when depowered. Bladders have been lightened, and there’s been a rework of some of the canopy reinforcement to two ply rather than Dacron to further save weight without compromising strength.

In the air, the stability feels like it’s been further improved and sits there rock solid and maintains decent rear line tension and composure throughout the entire depower stroke, yielding excellent levels of smooth sheet-on-demand power. Although the underlying grunt of the old model is still available if you require it, we found ourselves getting pulled off our rail much less when fully sheeted out. It’s like they’ve extended the power band into a more useful area of the bar stroke. Turning speed and bar feedback are both notably enhanced over the previous model. North have crisped up the Carve’s mobility no end, without making it too waspy and unpredictable. What’s more, they’ve managed to retain its previously immaculate drift behavior, which is as dependable as ever. The progressive power delivery and gentle background pull help sneak you upwind without trying too hard. Forward board speed is undoubtedly improved with the thinner leading edge. Loading up for a bottom turn, you don’t have to pre plan and think so much about the kite; it initiates turning eagerly, which feels far more intuitive and everything happens far more quickly. This allows you to be better positioned to hit the lip hard, and stall out a tail slide if you want to. This is particularly noticeable if it’s slightly onshore, where kite mobility and climbing ability is so critical.

Testing in the UK winter means clambering out over large swathes of turbulent white water, and it was noticeable how much easier it was with the Carve’s gentle residual pull. In variable conditions, when overpowered, the Navigator bar is a joy and very easy to trim in a hurry. Lightening the kite up seems to have improved the relaunch speed, which is important if you’re in between sets and time is critical.

For 2023, North have really stepped up the Carve, placing it firmly back in the wave sector, perhaps drawing its focus away from strapless freestyle a little and producing a far more perky and focused product for anyone that wants to hack away at walls of water. There’s tangible improvements in all of its performance characteristics, giving a high level of control and confidence when it’s required the most. It’s both playful and obedient, like a well-trained spaniel, and exactly what you’d want to take to conquer either Jaws or two foot of wind slop.